How one California preschool program is helping youngest learners with math 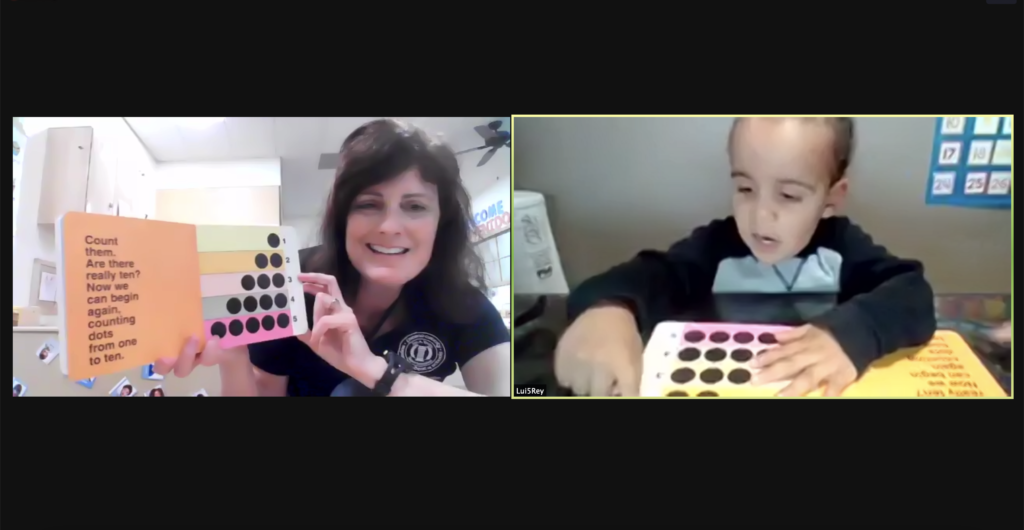 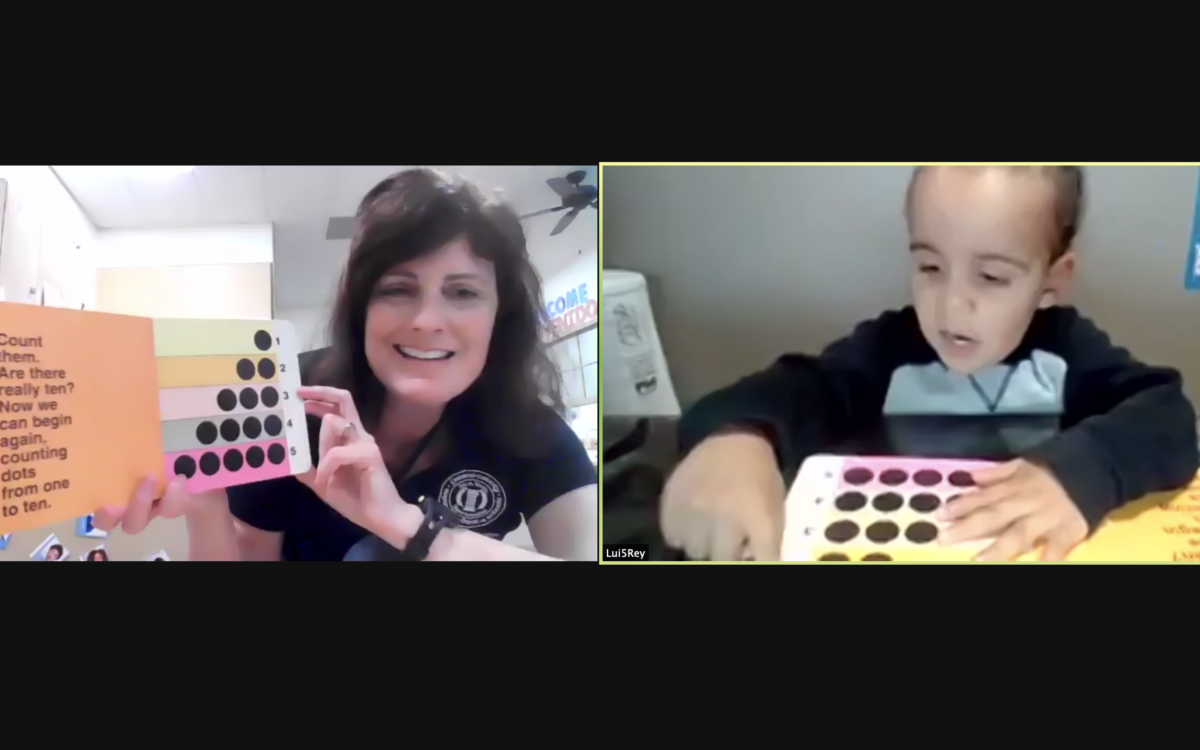 Teaching math remotely to kids who might literally throw a tantrum onscreen would be laughable in a typical year. But California preschool providers are attempting the seemingly impossible.

Moving, making noise and socializing are inextricable parts of healthy development for young children — but social distancing and distance learning has hampered many of those experiences for California’s littlest learners. Now, preschool teachers and child development experts are testing ways to connect with young children via digital screens.

Study: Effects of tutorial interventions in mathematics and attention for low-performing preschool children

Report: Math in the early years a strong predictor for later school succcess

Several studies have shown that introducing children to preschool-level math before kindergarten improves understanding and performance on math tests later on. However, many parents and even preschool teachers lack confidence in their own math skills and aren’t sure how to introduce young children to these topics early on.

Early education providers at the Lighthouse for Children Child Development Center, which is run by the Fresno County Superintendent of Schools, are piloting distance learning techniques for toddlers and even infants by focusing on ways to provide families with guided activities that they can do at home when in-person gathering is restricted.

The so-called “distance learning” that Lighthouse is piloting for toddlers is not the same kind of online school that K-12 students across the state have been engaging with for nearly a year now. Instead of hours-long lessons at the computer, Lighthouse offers a single 45-minute optional weekly Zoom session where families can learn alongside their kids and ideally build confidence to replicate some math lessons on their own, offscreen, at home. Some sessions are also aimed at infants by helping their parents learn how to introduce early math concepts at home.

The project is part of the California Statewide Early Math Initiative, an $11.2 million state-funded grant initiative that started in 2018 and aims to improve how preschool teachers and parents teach and talk about math concepts with young learners to better prepare them for math later on. That initiative partners with school districts, county offices of education and child care centers across California, with the goal of expanding and sharing successful efforts throughout the state.

“When school closures started happening, I was in many ways worried about preschool-age kids because I just wasn’t aware of many distance learning options for them,” said Carolyn Pfister, an education administrator for the State Board of Education who has helped develop and oversee the pilot. “Preschoolers are so social. I was really concerned about their language and motor development.”

At the center of the project is an effort to first equip families with physical materials and teaching strategies that their kids would be using in a traditional preschool day. To start, the program developers worked with an outside vendor to put together tote bags filled with blocks, bean bags, books, paper and markers, and other toys conducive to learning, depending on the child’s age group.

“We onboarded new children during the closure,” said Barbara Daniel, supervisor at Lighthouse. “We couldn’t always get the families those kits, so teachers came up with alternatives that could be found in the home. Instead of blocks you can use Tupperware containers, cans or cereal boxes, or create measuring tape out of paper.”

Using the provided activity kits, parents were then invited to attend weekly Zoom meetings with a teacher who guided them through a learning activity.

On a recent Thursday afternoon, preschool teacher Kiah Sanders had two families join her virtual session, which kicked off with a read-aloud of Eric Carle’s “Reaching from Head to Toe.” To make the experience more interactive, families had a copy of the book at home, and kids were asked to mimic the movements and sounds of animals that appear in the book and count and describe what they see. Meanwhile, Sanders projected pages of the book as her Zoom background, almost appearing as if she was in the book herself.

Then Sanders asked students to pull out their blocks and show her a specific number of blocks. In one round, she asked both students to show her five, then show her three blocks. After they successfully showed her the correct amount, she explained that they accomplished subtraction.

Each session includes sing-a-longs and introduces kids to new math vocabulary, wiggle breaks and open-ended questions so students can verbally interact with their teacher. Another important element is leaving time for parents to ask questions that they have, too.

“I’m not the most tech-savvy, so I had to learn a lot of the platforms when we switched to distance learning,” said Sanders, adding that some of the preschool’s students began returning in-person last November. “You will have technical issues and days when it won’t be perfect. But our children just want to connect with us, and we don’t have to be perfect.”

The technology wasn’t the only hiccup. Kids might scream or lose interest in the activity, wander off-screen, or just need a nap. In any of those examples, Sanders said, the best strategy she has discovered is to follow the child’s lead, allow them to explore and try to re-engage them by acknowledging whatever it is they are distracted by.

“All of us are learning together what distance learning means for an infant or 2-year-old,” said Matilda Soria, director of early care and education for the Fresno County Superintendent of Schools. “It’s not going to look like what you see on TV where a kid is staring at the computer and typing, so it was important to set up those zoom sessions with parents and helping to build their capacity to work with their child at home and provide options for live instruction.”

But allowing kids to be squirrely and even get distracted is hard for many parents, especially those with older students who may have an easier time sitting at a computer during online class. That was the case for Lucia Herrera, whose 3-year-old son Ale is in Sanders’ class.

“At first, it was overwhelming,” said Herrera, who has taken a leave of absence from work during the pandemic to help homeschool her two children. “My main concern with him was making sure he had interaction with peers. He’s been doing his own thing a lot and I want him to learn and interact with people outside of his household.”

Using the blocks and bean bags to practice early math skills such as sorting, counting and identifying numbers has kept him on track, and he can now count up to 30.

For Christina Peck, another instructor at Lighthouse who works with infants, teaching her students over video was unimaginable before 2020. “Fortunately I had about 2 years of working with infants and toddlers in-person already,” she said after a recent Zoom session with one family. “Thank goodness because now I have that as a reference.”

In person, she said, kids that age are allowed to crawl or walk away if they lose interest. When that happens in-person or now online, she’ll change her tone of voice and try to excite them with something new, incorporate a lot of body movement and slow down her speaking.

“But the most important thing is maintaining my relationship with the child and parent,” she said.

Now that the families have grown familiar with the expectations, routine and activities, Peck and Sanders move swiftly and fluidly through activities. If a student goes off-track, they follow them. For example, one of Peck’s students recently had a hard time following a counting activity, but the girl had a toy nearby that she was interested in. So Peck switched gears completely to show-and-tell, and in moments the student was back, excited to talk about her toy.

Another concern is how much screen time is appropriate for young children. But Pfister, who has worked on the pilot, said the purpose of centering lessons around hands-on lessons and family engagement is to prepare families for math talks and activities at home on their own.

“The world has changed so greatly since we started on this,” Pfister said. “Luckily and sadly, it’s positioned so that if we do more remote learning, this pivots pretty easily. The distance learning piece and even more so the family engagement piece will grow because there is a need for it.”