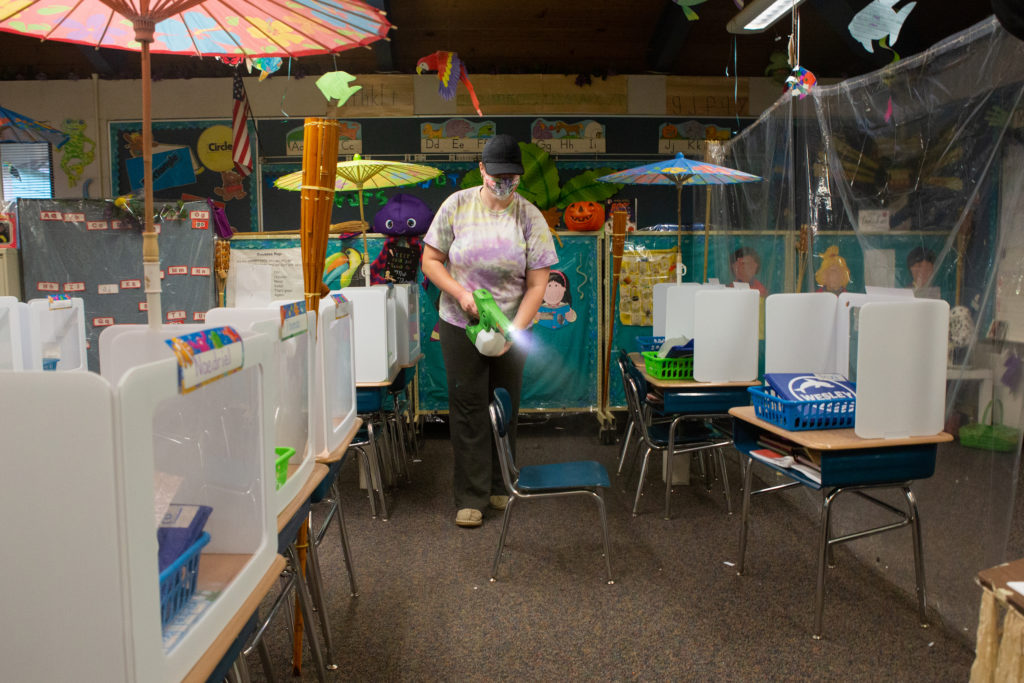 $2 billion in incentives back on the table with longer timeline to bring back students. 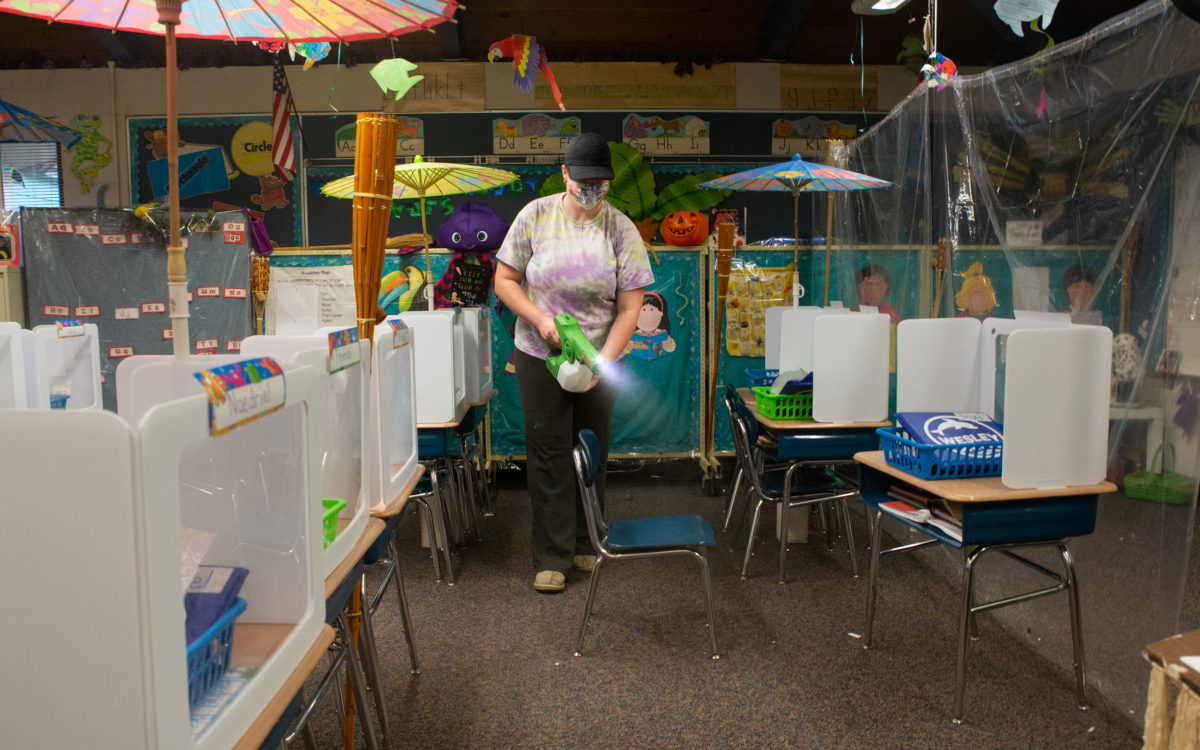 Credit: Allison Shelley for American Education
A janitorial staff member sprays disinfectant to clean a classroom after dismissal of school.

Credit: Allison Shelley for American Education
A janitorial staff member sprays disinfectant to clean a classroom after dismissal of school.

In a sign that they remain at odds with Gov. Gavin Newsom, legislative leaders on Thursday released legislation laying out their version of what districts must do to reopen schools. What’s missing, however, is the governor’s support after weeks of negotiations.

Senate Bill 86 and an identical version, Assembly Bill 86, which will be presented at a legislative hearing Monday, contains key elements that Newsom himself had proposed in his Safe Schools for All reopening plan in late December. These include $2 billion in incentives to encourage districts to sign on, and requirements that school districts negotiate safety agreements and institute rigorous testing of students and staff to qualify for the money.

For those who want the gritty details, a summary by section

Section 43521 details how $6.6 billion in state funding – $2 billion in incentives to expedite the return to school and $4.6 billion to address Covid’s impact on learning – will be apportioned, mainly via the Local Control Funding Formula.
Section 43522 describes obligations and uses for $4.6 billion districts can use between summer 2021 and Sept.  30, 2022, if they have returned for in-person instruction. Uses may include extending instructional time (longer days, longer years, intercessions); accelerated leaning through tutoring, community learning hubs and social/emotional support.
Section 43523 lays out requirements for seeking $2 billion in incentives for in-person instruction by April 15 to the most high needs students, who are defined. After April 15, districts in the red tier must offer in-person instruction to kindergarten through grade 6. Districts that submit safety plans by March 15 can operate under the terms negotiated. After that, districts must adhere to current, stricter state public health safety guidelines.
Section 43526 contains one sentence requiring County Departments of Public Health to make Covid vaccinations available to employees at a school offering in-person instruction.

But the deadline for filing for the funding has been moved to April 1 — two months later than Newsom initially proposed — and sets April 15 as the deadline for reopening elementary schools, or as soon after that the level of Covid infections in counties where districts are located declines to the “red tier,” the second most restrictive of the state’s four tiers.

“Science clearly shows schools can reopen safely, and that there is no reason for our children to suffer under indefinite distance learning,” Assemblyman Phil Ting, who chairs the Assembly Budget Committee, said in a tweet. “The State Legislature is ready to act, based on this data, so students can return to the classroom no later than April 15, even as talks with the Administration continue. Our agreement provides funding, vaccines and minimum safety requirements for all schools to bring back in-person learning in some capacity.”

In a statement Thursday, Newsom criticized the bill as not moving quickly enough to reopen schools and for setting conditions that might make it harder to achieve. “While the Legislature’s proposal represents a step in the right direction, it doesn’t go far enough or fast enough. I look forward to building on the growing momentum to get our schools open and continuing discussions with the Legislature to get our kids back in school as safely and quickly as possible.” 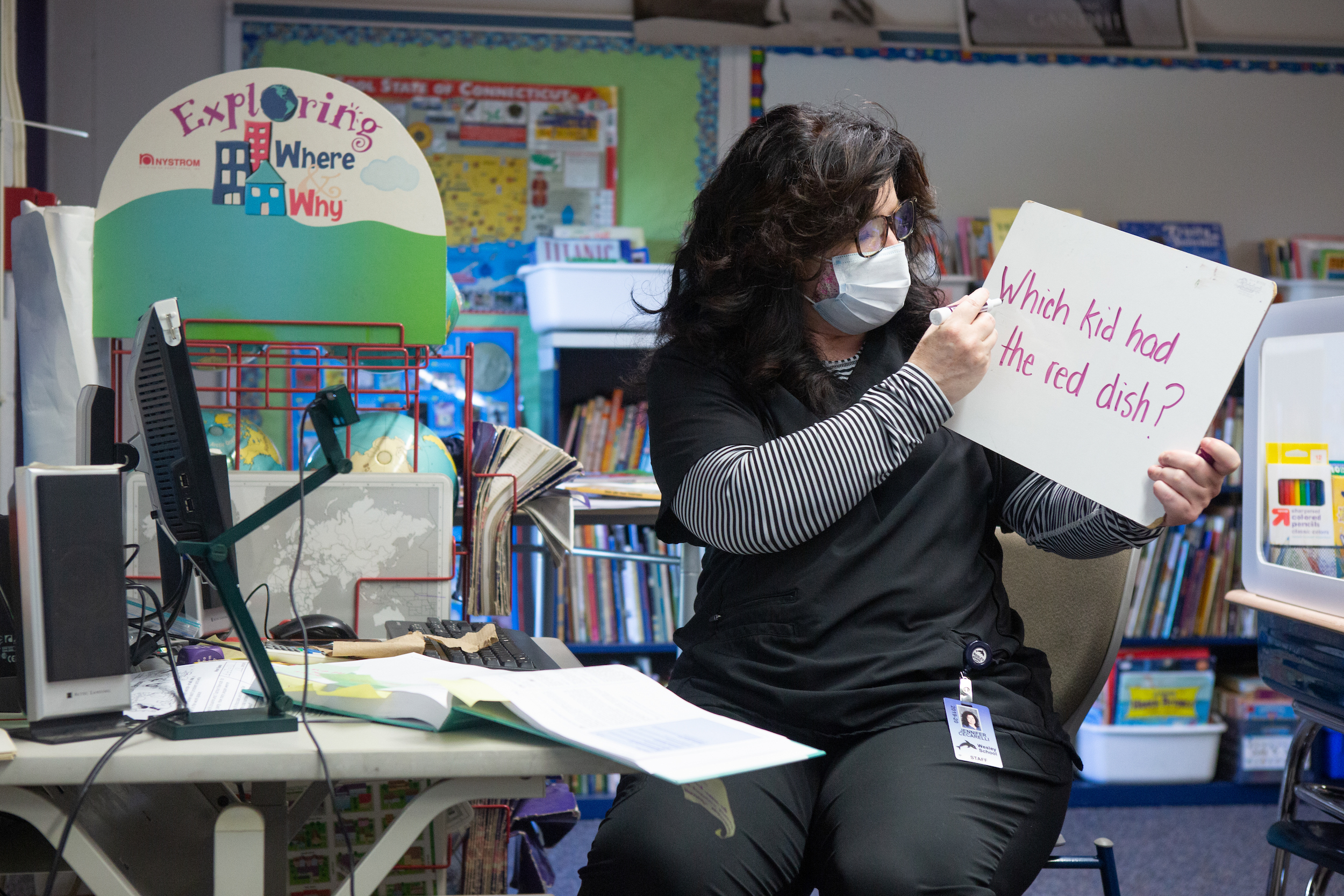 To receive incentive funding, Newsom’s proposal would have required elementary schools to reopen much sooner, in the purple tier, where rates of infection are higher than in the red zone. This week, he pointed to the federal Centers for Disease Control and Prevention, whose recommendation for allowing the youngest students back to school, is similar to the California Department of Public Health. It and the state cited the same scientific research to justify their positions.

The California Teachers Association has taken the position that teachers should not return in the purple tier, which has prolonged negotiations in many of the state’s largest districts.  Claudia Briggs, CTA’s communications assistant manager, praised the bill’s “focus on a phased-in opening of schools in the red tier … while recognizing that not all parents are willing to send their kids to schools and allowing for continued distance learning.” And she said the April 1 filing deadline would give districts time to put safety measures in place.

Like Newsom’s proposal, SB 86 would condition incentive funding to serving cohorts of students in all grades with the highest needs in the purple tier. The bill defines those as homeless and foster youths, students lacking internet access, those who are chronically absent or formally identified as at risk of abuse and neglect. The bill would require bringing back these students by April 15 — a longer deadline than Newsom favors.

Districts that have negotiated not to return to school until infection rates drop to the two lowest tiers, orange and yellow, could continue as planned, but would forgo the incentive funding. They also would not be able to draw down on a bigger pot of state money — $4.6 billion for summer school, tutoring, mental health and programs to address learning disparities caused by the pandemic — until they send students back for in-person instruction, whenever that occurs.

Rates of infection in many counties, including Los Angeles, have fallen to a level within the purple tier that would permit elementary schools to reopen under current state guidelines; however, only a half-dozen rural counties have yet reached red, defined as a weekly average of fewer than 7 positive tests for Covid out of 100,000 residents or the next tier down, orange. If trends continue, more counties may approach the red tier in coming weeks.

The bill also seeks to accommodate CTA and other school employee unions, which have insisted on being offered Covid vaccinations as a condition to sending staff back to schools. That has been a stumbling block to negotiations between legislators and the governor.

Newsom has opposed that, while encouraging counties to make school employees a priority. The bill seeks a compromise, although the language is ambiguous. It says that county health departments shall make Covid-19 vaccines available to school employees “who are working at a school site where pupils are attending in person.” What’s unclear is whether districts with approved plans and union agreements to reopen would have to delay opening until their teachers are vaccinated.

The immediate reaction from school districts was mixed. But six of the seven urban districts in the state that had strongly opposed Newsom’s plan for reopening elementary schools in the purple tier in February and March quickly signaled support Thursday in a two-paragraph statement.

“These clear guidelines from the state will help reopen schools in the safest way possible. In addition to ensuring appropriate health measures at schools and underscoring the need to control community spread of the virus, the proposed action recognizes the critical role vaccinations for all school staff play in creating the safest possible school environment,” said the statement signed by superintendents of Los Angeles, San Diego, Fresno, Sacramento City, Oakland and Long Beach, which this week announced it would be reopening its elementary schools on March 29. Not signing the letter was San Francisco Unified Superintendent Vincent Matthews.

Other districts still negotiating with unions for a faster reopening timetable than April 15 expressed concerns about the expense and difficulty of extensive testing of staff and students, as required in the red tier, and about possible delays in vaccinating staff.

“School districts cannot control that timing. It would be problematic if we cannot reopen before vaccinations,” said Parvin Ahmadi, superintendent of Castro Valley Unified, in Alameda County. The administration has a signed an agreement with its unions for teachers to return in the red tier. Under the bill, the terms of the agreement would be grandfathered, not subject to stricter testing requirements. But Ahmadi said a future agreement to reopen middle and high schools might be subject to different, stricter rules.

“The state needs to look at it in a more permanent way,” she said. “We may be in the same place in the fall.”

Edgar Zazueta, senior director for policy and governmental relations for the Association of California School Administrators, said that, with more schools already “pushing harder than ever” to reopen schools, “we continue to question if adding additional conditions to reopening such as the onerous Covid testing schedule and collective bargaining requirements will actually achieve the objective of getting more kids into classrooms.”

The urban districts, employee unions and other groups representing school districts had objected to using general state funding for schools through Proposition 98 to pay for Covid safety measures like testing, ventilation expenses and safety equipment. But Newsom has said that one-time state funding and $6 billion in additional federal funding that Congress approved in December — with more likely coming under President Joe Biden — should be sufficient to cover reopening expenses.

The Legislature would also use Prop. 98 funding for the $2 billion back-to-school incentive grant and fund it as Newsom proposed, using the Local Control Funding Formula. It provides extra money for low-income, foster and homeless students and English learners.