A rush to calculus leaves some students behind in California 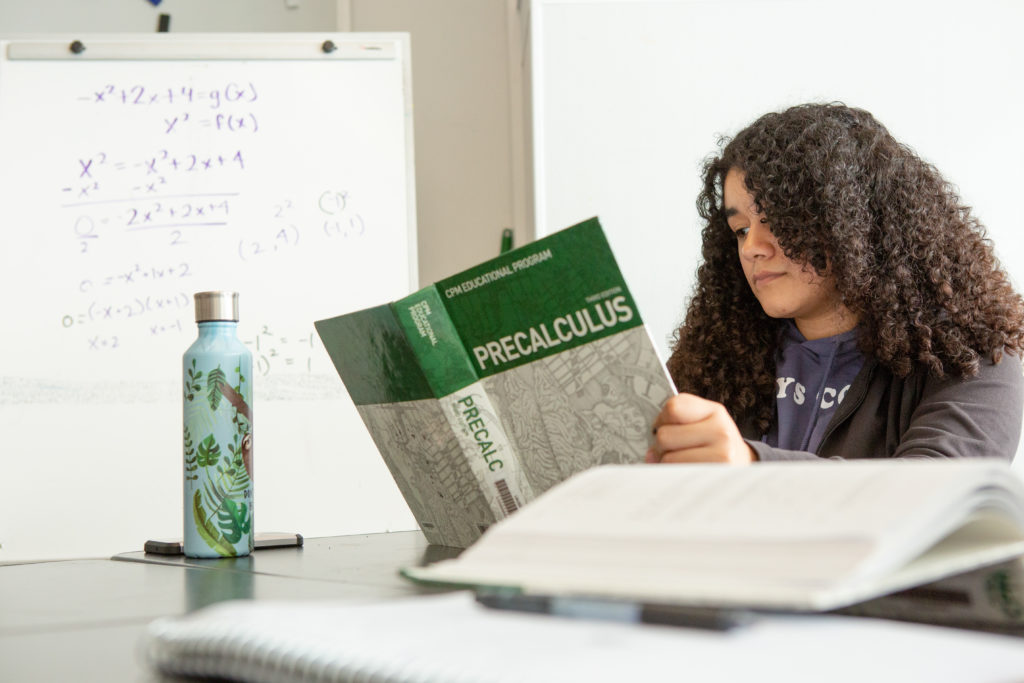 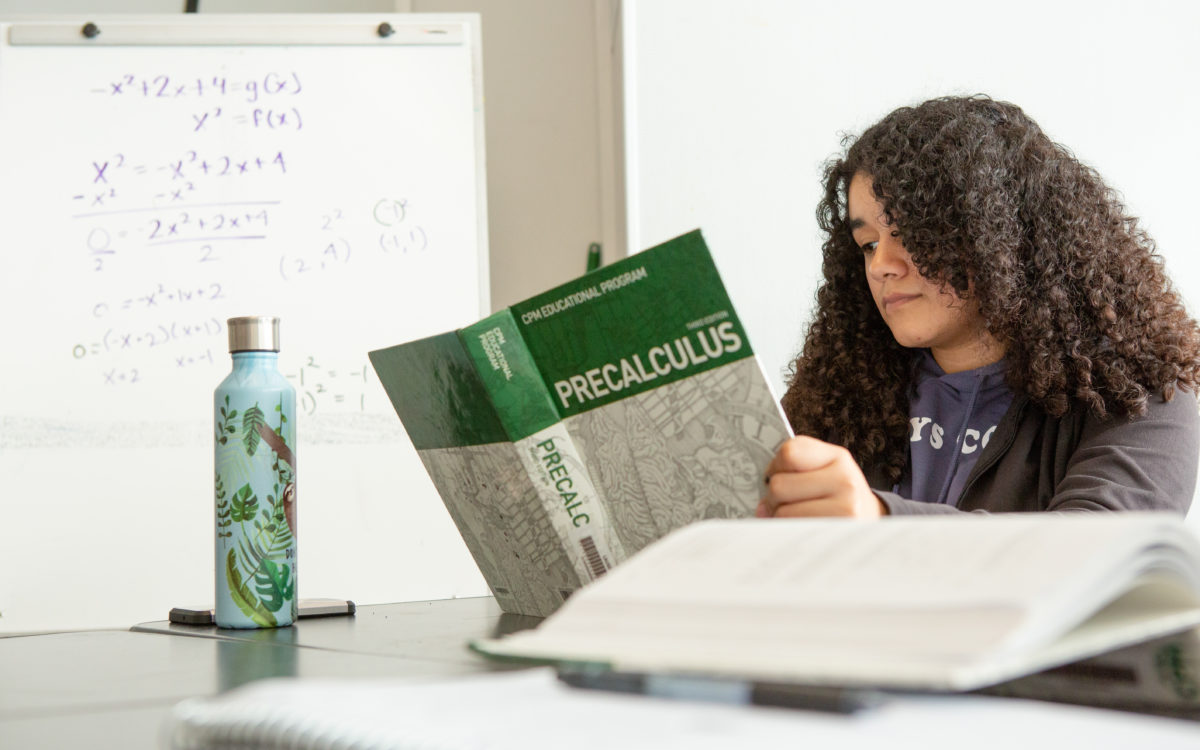 Even in the birthplace of microchips and iPhones, unequal access to advanced math starts early for many California students.

Luis Castro Limon, an incoming senior in Pomona Unified, has seen the inequity play out firsthand. Limon excels in math, but when he transferred to a new middle school in eighth grade, a counselor rejected his request for advanced math because he didn’t take the school’s seventh-grade math course.

“Math is his forte. When I requested the honors class because I knew my son was capable, the counselor said he didn’t qualify,” Limon’s mother, Yésica Limon, told EdSource through a Spanish translator. “But she never explained why or that we could talk to a teacher or do anything else. At that point, I made an appointment with the principal, but they didn’t explain anything.”

More on the California Math Framework

Limon was later accepted into the course, placing him on a fast track to advanced math in high school, but only after a teacher backed up his and his mom’s requests. The whole situation left him feeling slighted and frustrated, he said.

“The counselor seemed irritated that I wanted to get into this class. She said I would struggle and fall behind,” said Limon, who has excelled in math since then and is now enrolled in the Pomona College Academy for Youth Success, a college-prep program that helps prepare first-generation and underrepresented students for highly selective colleges and universities.

Limon’s story is not uncommon across California, where Latinos make up more than half of the state’s total student enrollment but only 30% of those enrolled in calculus in 2018-19, according to an analysis of the most recent California Department of Education data by EdSource. Black students are just over 5% of the state’s total K-12 enrollment, but they make up 2% of those enrolled in calculus across the state.

Now, California has a rare opportunity to shift expectations regarding how students learn math, who is deemed gifted and which students should be given a chance to take advanced courses. The state is currently rewriting its official mathematics guidance for schools and teachers, known as the California Mathematics Framework, a process that happens every seven years. The framework is voluntary. However, districts are expected to align staff development and learning materials with what it outlines.

But one of the framework’s major proposals — encouraging students to take the same math classes in middle school through sophomore year, rather than placing students into advanced or traditional math courses beginning in sixth grade — has been met with fierce opposition from some parents and teachers who fear it could hold students back.

“As teachers, we want to grow all of our students to their potential and each of them receive the attention they need. That’s our students on grade level, those who need help and those who are ready for acceleration,” said Lori Meyers, a public school parent and private school math teacher in California. “The recommendations in this framework would not allow for that.”

Others have criticized elements of the framework that incorporated elements of social justice into practical applications for math lessons. A previous version of the framework cited a report titled “A Pathway to Equitable Math Instruction,” which calls for dismantling racism and white supremacy that surfaces in mathematics through tracking and intervention rosters, as well as practices such as finding only one right answer.

However, the framework authors agreed to remove the report after parent complaints. The framework still calls on teachers to make math lessons relevant to students’ cultural backgrounds and rejects the notion of giftedness, saying “there is no cutoff determining when one child is ‘gifted’ and another is not” and that the idea has led to inequities in math education.

“For all the rhetoric in this framework about equity, social justice, environmental care and culturally appropriate pedagogy, there is no realistic hope for a more fair, just, equal and well-stewarded society if our schools uproot long-proven, reliable and highly effective math methods,” reads an open letter signed by nearly 500 math teachers and professors addressed to Gov. Gavin Newsom, State Superintendent of Public Instruction Tony Thurmond, the State Board of Education and the Instructional Quality Commission.

On July 14, the California State Board of Education voted to push back its timeline for revising the framework. That was done almost two months after a decision by the Instructional Quality Commission to make changes to the framework following a 60-day public review period that solicited more than 500 comments from teachers, parents and math education experts.

Experts say stark gaps among some ethnic groups, which exist throughout the state and country, start as early as elementary school, when students are typically tested for math placement for middle school. Course enrollment data analyzed by EdSource shows that white and Asian students are frequently overrepresented in calculus and the pathways that lead to advanced math courses. Native American, Black and Latino students are more likely to take Algebra 1 later in high school compared with white and Asian students, who are more likely to take it in eighth grade, according to data from the U.S. Department of Education’s Office of Civil Rights.

Studies have also shown mixed outcomes for students who speed through or skip math courses, which students often do in accelerated math pathways. One recent nationally representative study of gifted programs found that students’ reading scores improved only slightly in this model, by 2 percentile points, and that math score gains for students who got into gifted programs were even smaller.

The study also showed that students in gifted programs have much higher socioeconomic status and that students from wealthy backgrounds benefited the most, likely due to private tutoring, parental support and programs tailored to their needs.

“The caution around accelerating students beginning in middle school to get to calculus is appropriate,” said Pamela Burdman, the founder of Just Equations, which researches and advocates for equitable math education opportunities. “What’s important to remember is that no one is trying to forbid students from taking calculus in high school.”

Burdman noted that the proposed framework does not eliminate calculus. She sees it as a chance for schools to increase their advanced math course offerings, like data science and statistics, and give students a more equal footing to take them.

Debates over how to teach math have been ongoing in California for decades, and unequal opportunities to take rigorous courses date back even earlier. As the public education system expanded in the 19th century, students were frequently and explicitly separated into academic programs based on race.

The adoption of the Common Core State Standards in math and English language arts in 2010 marked a turning point for math education. The new standards shifted instruction away from rote memorization to focus more on real-world application. Rather than separating math into discrete subjects, the new standards interweave topics and introduce Algebra much earlier than previous standards.

California’s public universities are now moving in a similar direction. In 2016, the University of California stated that high school students do not need to take calculus to be eligible for admission. And in 2020, it added more math courses, such as data science, to the list of courses it accepts for students’ third and fourth year of high school math.

As a result, many districts have moved away from traditional math course sequences and now offer integrated courses that combine topics, such as algebra, geometry and trigonometry. Those integrated courses also lead to calculus and other advanced math in a student’s junior and senior years of high school. And a small but growing number of school districts, such as San Francisco Unified, have abandoned the tracking system altogether.

In San Francisco Unified, students typically take the same integrated math courses from grades six to 10 and then select from a variety of options, including AP Calculus, their junior and senior years. Students looking for additional math opportunities can take two math courses their freshman or sophomore year to make room in their schedules for more advanced courses later, or they can take a “compressed” version of Algebra 2 and pre-calculus their junior year.

After passing a new course sequence policy in 2014, the percentage of district students who failed and had to repeat Algebra 1 decreased from 40% with the class of 2018 to 8% for the class of 2019. The percentage of students meeting application requirements for the state’s public universities increased for Black, Latino, Asian and white students alike, and total enrollment in AP math courses increased from 1,641 in 2016-17 to 1,819 in 2020-21.

During the same time period, overall enrollment in the district ticked up slightly. Racial demographics stayed similar for Black and white students, but the portion of Latino students grew by 2 percentage points and Asian students decreased by about 4 percentage points, according to data from the California Department of Education.

Melissa Daar Carvajal, a parent of twins about to enter their senior year in San Francisco Unified, is pleased with the math experiences her sons have had at Mission High School. One son, Tomas, is planning to take calculus and computer science this year as he prepares to apply for STEM college programs. Carvajal’s other son, Samuel, will be taking statistics and plans to apply to a UC campus. Both took the same courses during their freshman and sophomore years, as well as in middle school, as part of the district’s reform.

“I think this idea that my child will be held back could be informed by some of our own prejudices that even liberals still carry in the back of our head about other people,” said Daar Carvajal, who is also president of the Parent Teacher Student Association. “I don’t see any evidence that my children were held back in any way in any of these classes.”

Now in his senior year, Limon, the student at Pomona Unified, is taking AP Statistics after a successful year of calculus as a junior. He’s weighing his options for what comes next with college but says math will be part of his plan. A student activist, he’s already used some of his math skills by analyzing local budgets and advocating for funding for foster youth and other student-focused programs.

“It’s annoying,” he said about his math experience in middle school, “not even because they thought I wouldn’t be able to do it, but they think ‘you’re a kid’ so they wouldn’t take serious what I had to say.”

Limon’s mother is now struggling with middle school math placement for her daughter, after a year of remote learning with the same district. She’s open-minded about de-tracking efforts she’s seen at other districts, but she fears the slower pathway in her district could hold her daughter back from opportunities later.

“Even if I don’t speak the language, I’ll find the help for my kids so they can continue to advance, but a lot of parents don’t have that capacity,” she said, noting that her involvement with her children’s education has helped her advocate. “Education here is designed for the average American, but we’re not counting the Latinx experience as part of this.”

Leave a Reply to Timo Timo