In his own words: Gov. Newsom on why he’s not ordering all California schools to close 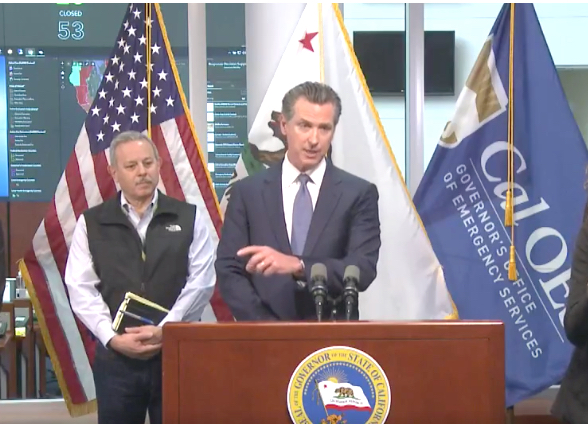 In a state as big as California, uniform approaches aren’t always the best, he says.

Gov. Gavin Newsom explained why he has not mandated the closure of all schools in California to try to slow the spread of the coronavirus during a press briefing in Sacramento on March 15. He also said the state would work with private organizations and public agencies to help districts provide breakfasts and lunches to low-income students while schools are shut down. What follows is a lightly edited transcript of his remarks. The full briefing can be viewed on Twitter here.

The current number of schools in the state of California that have already shut down is 51% of all the districts in the state. That is somewhat misleading because we are in the range of 80 to 85 percent of all of our kids no longer going to school starting tomorrow. That includes many of the largest districts in the state; 24 out of 25 of the largest districts in California have already shut down. The one remaining in that group is Kern High School District, which has remained open. Many smaller districts remain open and for reasons that are perfectly understandable. And this is something we also want folks to know: On Tuesday we will be putting out very detailed guidelines for those schools that are open and are likely to remain open.

And those that have closed, we are vetting and curating and validating all kinds of private and public sector solutions to address the obvious real problems how you feed people that cannot be fed otherwise because they’re on free or reduced, not just lunch but also breakfast. In some districts, 80% or even more of their children meet that criteria. It’s 60% throughout our entire educational system.

It’s one thing to say you have a plan, it’s another to actually deliver on that plan. And with respect, not everybody that closed had a plan. So we are making sure we supplement that, take responsibility to meet this moment. There’s a transportation issue. There’s a logistics issue — where we provide those supports (like meals) in parks or libraries.

We have a particular concern for special needs children. And this is something personal. As someone whose mother worked for adoption of special kids, this is how I grew up, with a deep consciousness and mindset for those with physical as well as cognitive disabilities. Many of those children don’t have places to go. We take for granted that so many of these kids are going to be taken care of when in fact they’re not going to be taken care of to the degree they should be. And so we are paying particular emphasis on those with special needs and making sure we meet this moment in the community — childcare more broadly defined.

We believe in quality childcare, not just access to childcare, what that really looks like. And so that’s what this planning process has been about. And you may have noted just a few days ago, we put some information out on the initiation of that planning process. On Tuesday, we will lay out in detailed terms what that vetted and curated process and the protocols we want to establish should look like, from a very bottom-up, not top-down perspective. From the perspective of districts in rural parts of the state that operate very differently as it relates to community assets than some on the coast with large social safety nets.

We have to meet the needs of all of our diverse communities and members in a nation-state with 6-plus million children. I should just note the first six states that announced they were shutting down their education system combined didn’t have as many children as we do in the state of California. This gives you a sense of the magnitude of the number of children that we are needing to address. That again puts a real burden on trying to orient an appropriate response to meet this moment. The superintendent of public education, with whom I’ve been working very collaboratively, our health and human service agencies and our logistics teams that also are represented in 13 task forces.

Question from reporter: What about the perception that California is not being aggressive enough in closing all of its schools?

With respect to those governors, they may have figured all that out and may have those protocols and process and be able to answer that in detail. But I can assure you, just last night I was upstairs working on foster kids (in colleges) that were working on campus and living on campus that quite literally are ending up in our homeless shelters because there was no plan (as a result of the sudden closure of their campuses).

So we deal with reality, not perceptions. My kid’s district is off for a month. I mean, is there a benefit in having all the districts be off the same period? Last Saturday we put out uniform standards and guidelines for the state of California. We couldn’t have been more clear. Last Saturday we laid out for schools our criteria cross the state of California and it was based upon the conditions on the ground.

This is a nation-state. I can assure you what you already know. Santa Clara county’s conditions are extraordinarily different from Tulare, extraordinarily different from Madera and Colusa (counties). And so while it may be fanciful and comforting by perception standards for some to have one size fits all (referring to closing all schools in a state), that’s not the reality on the ground.

And so there’s no community spread in some communities there, significant community spread in other communities. And so we think it’s appropriate on that basis to have the kind of criteria that we allowed and advanced for consideration to be advanced. It had been done a week ago. It was advanced very formally on Thursday and Friday with those announcements.

You’ll hear many other announcements over the course of the next few days. But superintendents say, “Don’t shut me down. Help me with these kids.” Because right now they say, “I don’t know how to help that child. I don’t know how to feed that child.” And they’re asking us for support. So I could say, “You know what? Let’s shut you down. You figure it out.” Or I can say, “you know, we’re going to do this very thoughtfully. I’m going to do it deliberately.” I prefer to be responsible to the reality, not the perception.