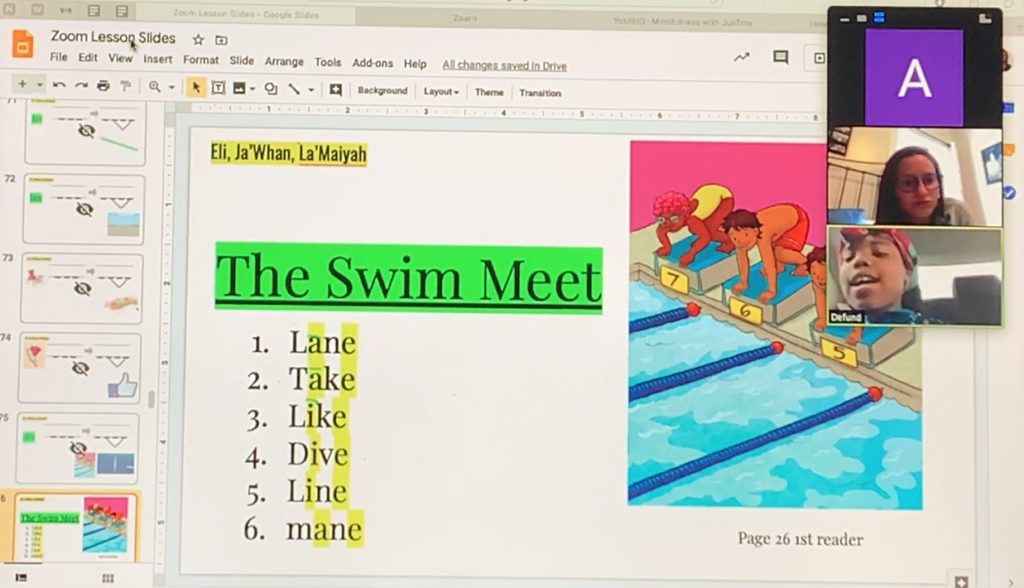 Richmond’s Stege Elementary has a redesign plan to turnaround the school. 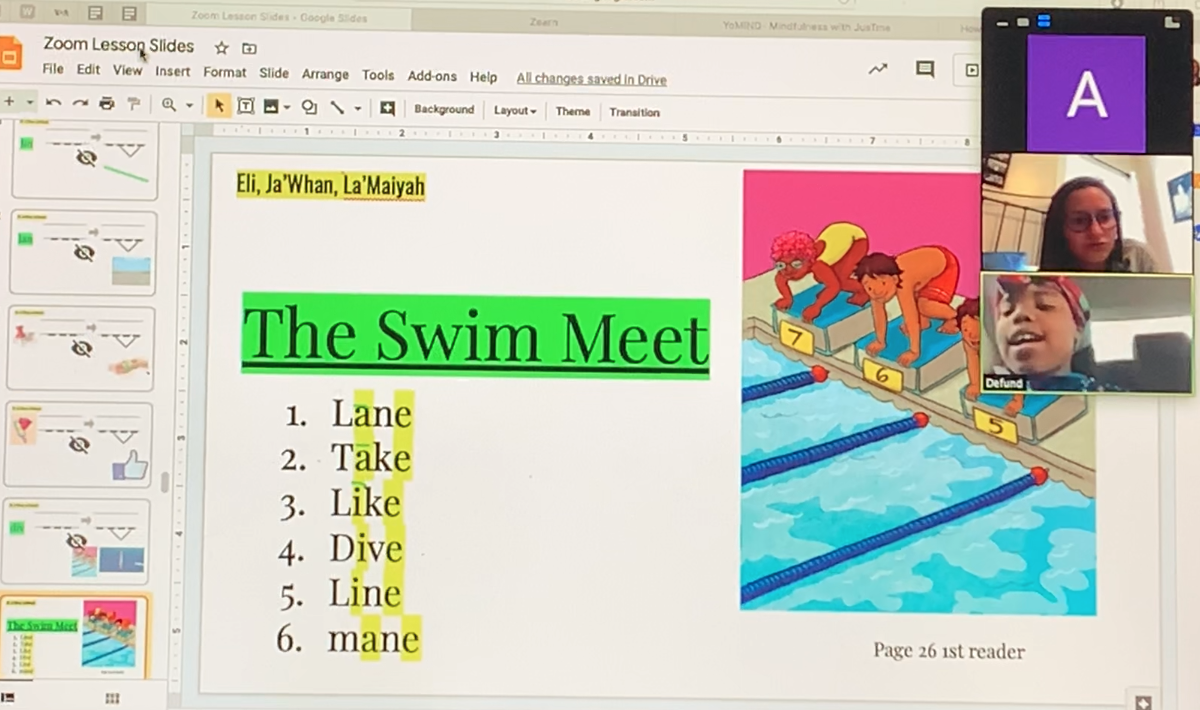 For Richmond’s Stege Elementary, the end of this school year was about showing progress as it begins a complete overhaul to a safe and enjoyable school where children want to come to learn.

But like many schools across the country, the pandemic forced the teachers and students to adapt on the fly.

Special education teacher Hannah Geitner found herself helping her students learn to read in less-than-ideal situations over Zoom. In one of her sixth-grade classes, a student could be easily distracted by his siblings joking around off-camera. Another student, rising fourth-grader La’Maiyah, attended her personalized classes from the back seat of her mom’s car. For that student, regardless of whether she lost her internet connection or was distracted by background noises, she pronounced the syllables and words from sentences Geitner gave her to read.

Each correctly pronounced word was followed by an enthusiastic, “Beautiful, La’Maiyah!” Or, “I’m so impressed with you,” from Geitner, as La’Maiyah smiled.

Editor’s note: This story is part of an occasional series on the challenges facing Stege Elementary in Richmond in the East Bay as it embarks on a plan to transform itself by the fall of 2020. The school, which serves mostly poor students who are struggling to learn reading and mathematics, has stabilized its teaching staff and tapped community support to help in its turnaround.
Go here for other stories in this series. Please share your story about Stege Elementary with us.

“Seeing them in their homes has been fun because they’re opening up way more than they did in school,” Geitner said. “Especially with reading. Sometimes in class, if we’re in a small group, they’re hesitant to read. But over Zoom, they’re eager and want to do all the reading, so that’s cool.”

Last year, the West Contra Costa Unified School District chose Stege to undergo a complete redesign. The school faced a wide range of challenges, including low academic performance and a high suspension rate. Located on the edge of the San Francisco Bay and San Pablo Bay, the school serves about 280 students, mostly low-income, black and Latino students. And nearly 40% of students were chronically absent last year, according to state data.

Despite the pandemic, Stege students showed up for their online classes and participated. District-wide 85% or 13,376 elementary students were “engaged” for the week ending May 29. At Stege, about 71% of students were “engaged” for that same week. Participation was highest among Stege’s first-graders at 93% and sixth-graders at 88%. The lowest participation was in the fourth grade, where 54% of students were reported “remote absent.” Engagement, for example, included if they appeared in the virtual class or completed an assignment.

“It’s really hard to have 100% engagement,” Stege Principal Nicole Ruiz said. Ruiz, who is also a mother of a high-schooler and an elementary school-age child, said she knows how difficult it is for students to participate and remain engaged during shelter-in-place orders. And that experience informed her views of her students and how they were fairing.

“The reality is even as engaged as students can be or are, everything is not perfect,” and some students won’t be academically performing at their expected grade level, she said. “We only want what’s best for students, and, yes, we’d love for them to do their work and turn it in on time, but other real-life things are going on, and we have to be flexible.”

Geitner said some of her students academically performed better online than they did before the pandemic. While other students found classwork too overwhelming to complete or do from home, she said.

But even in school, students don’t have six straight hours of learning time; there are breaks and time to develop relationships with classmates and teachers, she said.

“It’s not all sit-down for 90 minutes on an iPad,” Geitner said. “Reminding people of that has been a big thing and making sure we’re responsive to families and what they need. We have to understand a lot of kids don’t have an ideal place to sit down at home and do work or a Zoom class.”

The school anticipates that by September, students will be returning with learning loss because the pandemic ultimately shut down in-person instruction. Gov. Gavin Newsom wants to target more than $4 billion in federal coronavirus aid to address learning loss that low-income and black students have experienced disproportionately during school closures. He’s cited research by McKinsey & Company, a management consulting firm, projecting that black students will return to school with the average loss of 10 months of learning. For low-income students, they could return with the average loss of a year of learning.

Ruiz said learning loss happens even if there wasn’t a pandemic. It happens every summer. It happens during the school year. But when September begins, teachers don’t redo the year and this year won’t be different. They will take students where they are and move them forward.

So, some parents will work with their children to prevent those learning gaps, and some parents won’t, Ruiz said. But teachers don’t ask for a “do-over.”

Teachers and schools will do assessments in September to evaluate their students and “meet them where they are” academically, she said. The academic interventions teachers and the school offer these students in the fall will have to be “much tighter and at a higher level, but we’ll have to get it done,” Ruiz said.

Next school year will be a big one for Stege. It’ll be the official start of the school’s redesign plan that was crafted this year.

All the school’s 17 teachers, except for one who is moving out-of-state to be closer to family, will be returning next year. Before this year, teacher turnover was a problem for the school.

The school will have new curriculums and instructional materials thanks to decisions made by Stege’s redesign team and community advisory board while everyone sheltered in place.

For example, the redesign team created a Student Success Profile for the elementary school to use as a guide describing the skills and qualities that will be expected of a student leaving the school. (Such profiles are rare to find at any elementary school.) The teachers are introducing a new math curriculum, Zearn Math, which received a top-rating from EdReports, an independent nonprofit that reviews instructional materials. The new math curriculum also integrates with the school’s technology and will allow for better distance learning options should classes continue virtually next year.

The team also decided that Stege will become a model for other schools in the district by offering “Portfolio” learning, which allows students to personalize their assignments, collect them as a body-of-work and share their progress with family and teachers through “student-led conferences.” The model is a way for students to show their skills in the way artists show their work or job candidates display their past projects. Ruben Aurelio, executive director of elementary education for the district, said that while other schools may dabble in this type of learning, none of them offer the model as a complete program.

But the school district is still facing an additional $22 million deficit because of the coronavirus pandemic, and some resources given to the school last year, such as extra pay for teachers, may not be in place come September.

“Stege is still a top priority for us,” Superintendent Matthew Duffy said. “But the budget impact of this (pandemic) situation on schools for next year is going to be severe.”

Duffy said Stege, which has existed since 1943, is on the list to be replaced or fully rebuilt thanks to a $575 million facilities bond voters passed in March. The district hasn’t said when this would happen but the school is listed third in line on West Contra Costa’s master facilities plan.

But for other extra resources, the district is still figuring out what it will be able to do for the school financially.

Duffy said he’s pleased by the progress that Stege has made this year, even as they and the district faced the pandemic. He said he loves the portfolio model the school is embracing to allow students to showcase their work more publicly. They’ve made gains in reading and the district supports the new math curriculum Stege will pilot, he said.

Ruiz, who started the school year frustrated by a lack of resources from the district, said she’s optimistic for next year. She and the district have come to an understanding.

Even without a lot of money, the district is still working to give resources to the school, Ruiz said.

And the plans for next year are exciting, she said.

“I really worked toward our school having something sustainable,” Ruiz said. “I don’t want to come up with any grand ideas that need so many different resources that we can’t continue. I also don’t want something that can’t be duplicated.”

Leave a Reply to Aaron