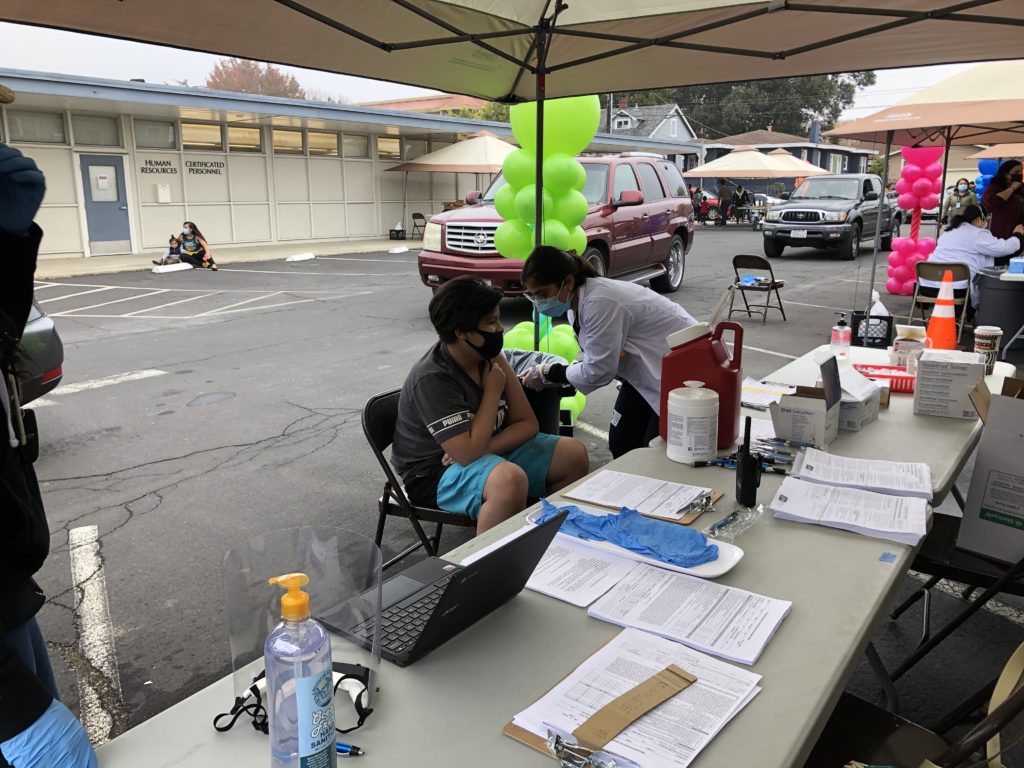 Declining rates means some students won’t be able to return to campuses whenever they reopen. 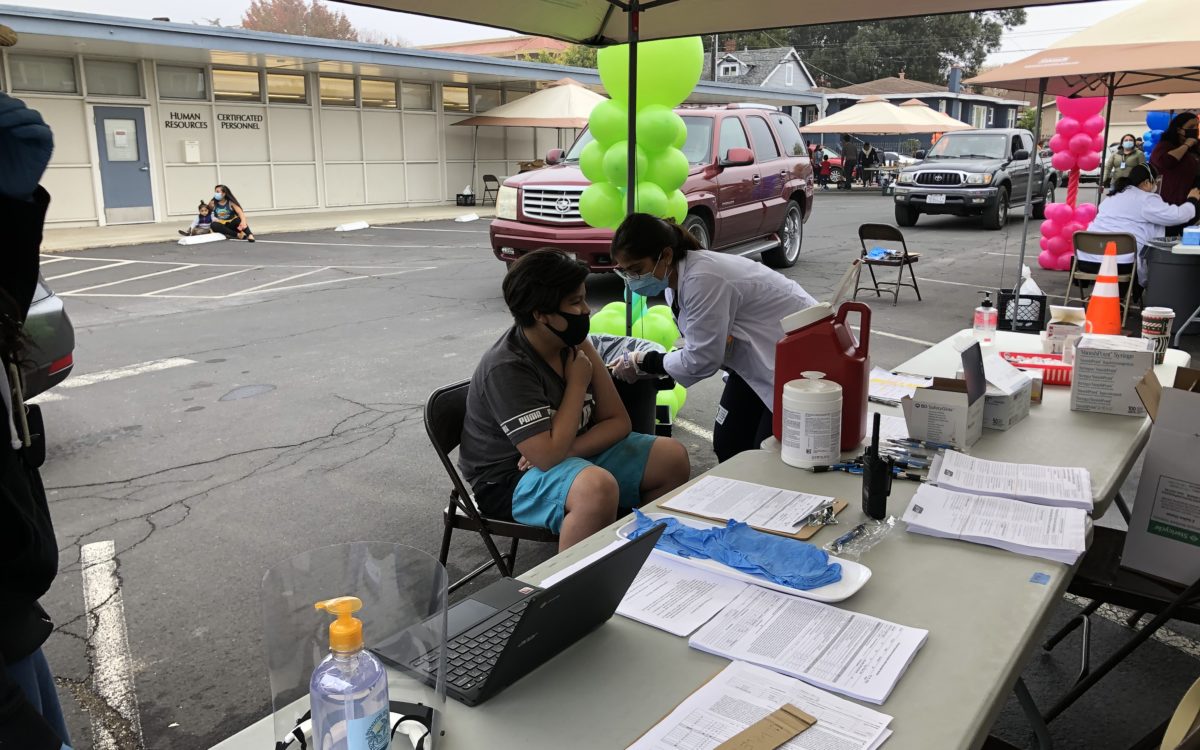 Even as public health officials face the challenge of how to vaccinate all or most people to protect them from the Covid-19 virus, school administrators are having to come up with innovative ways to ensure that students get immunized against more familiar diseases like measles and whooping cough.

To the alarm of school district officials, immunization rates have plummeted in California during the pandemic.

In May the California Department of Public Health rang the alarm about falling immunization rates statewide, reporting that the number of children who were vaccinated in the month of April fell by more than 40%, compared to the same month the previous year. State officials have not yet compiled data for this school year.

Although most students in California are currently learning at home via distance learning, they will have to be immunized before attending schools for in-person instruction. School districts are boosting their efforts to make sure that happens, including at West Contra Costa Unified, which handed out 244 free Thanksgiving turkeys to families who brought students to a vaccination clinic in the parking lot of district headquarters last week. The San Francisco Bay Area district, which includes the city of Richmond, also handed out turkeys to families in need.

Families drove up to checkpoints to sign in and then were ushered to tents where pharmacists gave immunizations. After students received their shots, families waited in their cars for an hour to ensure there were no negative reactions to the immunization, while district staff circulated among the cars doling out turkeys, $50 gift cards for groceries, boxes containing a week of meals from the school lunch program and Safeway coupons.

State immunization law requires documentation of vaccines when students enter child care, transitional kindergarten/kindergarten or seventh grade, or when transferring into schools or child care from out of state or out of the country. Children must be immunized against 10 serious communicable diseases, including polio, chickenpox and Hepatitis B.

West Contra Costa Unified, which enrolls about 30,000 students, started the school year with more than 1,000 students who had not sent in proof that they had all their immunizations, district officials said. After the immunization clinic about 450 students still needed immunizations.

The Nov. 19 immunization event followed months of outreach from school staff to families to remind them to get their immunizations, said Superintendent Matthew Duffy. That outreach wasn’t always successful, he said, but seeing dozens of cars line up for the event was reassuring.

“I think what we’re doing today is showing something that works,” Duffy said during the clinic. “Simply continuing to ask people to go get immunizations and seeing over and over and over that it’s not working, we’re changing it up, hosting at a place people know, a place people feel comfortable, with staff that they know, makes a difference.”

Duffy said the district’s immunization rates declined because some families have lost jobs and their medical insurance, or were having trouble getting appointments for immunizations at medical offices and clinics that may have been prioritizing Covid-related patients.

The district paid for immunizations for families without insurance from federal Coronavirus Aid, Relief and Economic Security Act funds, said Tony Wold, associate superintendent of business services for the district.

Children who are not fully vaccinated can only attend school in California if they have a medical exemption, are homeless or are admitted conditionally while catching up on immunizations. School districts report the number of students vaccinated at the required checkpoints of transitional kindergarten/kindergarten and seventh grade to the California Department of Public Health.

This year the annual report to the state, usually due around Nov. 1, has been pushed back to Jan. 29, said Jonathan Mendick, spokesman for the California Department of Education.

What if your child isn't vaccinated?

Students with medical conditions can get exemptions, with restrictions

Students can get medical exemptions if their physician deems it unsafe for them to be vaccinated, but beginning Jan. 1, 2021 there will be new restrictions. For a medical exemption to be valid a licensed physician or surgeon must submit it to the California Immunization Registry on a standardized electronic form.

The State Department of Public Health will monitor immunization levels at schools, as well as whether individual doctors have submitted unusually high numbers of exemptions.

Any student with a medical exemption issued before Jan. 1 is not subject to the new restrictions until he or she reaches the next vaccination checkpoint.

Students who need multiple vaccinations or doses of a vaccine can be admitted to school conditionally while they catch up on their shots. Students who are behind on their vaccinations must follow a catch-up schedule that spells out when it is safe to take each vaccination when more than one is needed.

Generally, after school district officials identify students without the proper immunizations at the beginning of the school year they begin working with their families to bring them into compliance. This year district officials interviewed by EdSource report that it’s been more difficult to connect with these families and to help them find the resources they need to get immunizations when children are not on campus.

San Juan Unified staff increased the calls to families this year and worked with a local clinic to offer immunizations to families without insurance or with varying levels of insurance, said Dominic Covello, director of the district’s Student Support Services Department. The district also is operating a mobile health clinic.

At the beginning of the school year 1,100 students in San Juan Unified, about 3% of its student population, needed immunizations, Covello said. He said that number has come down but that the district doesn’t expect to have an accurate updated number available until January.

The district, which serves 51,000 students in Sacramento County, launched its immunization campaign and opened an immunization clinic about a decade ago. Because of social distancing and personal protective equipment requirements put in place during the pandemic, the district has had to close the small clinic.

Regardless of its recent efforts, Covello is afraid that the pandemic will set the district’s long-term immunization efforts back and that some students won’t be able to return to in-person instruction immediately after schools reopen, whenever that happens, because they are not fully vaccinated.

With that deadline and anticipating campuses reopening at some point, school districts are redoubling efforts to communicate with families about the need for immunizations.

Fresno Unified had a big push in the beginning of the school year to get kids vaccinated after starting with a 77% vaccination rate, said Jane Banks, the district’s director of health services. In the first three weeks of school, the district held around 10 “pop-up” vaccine events at three campuses, she said.

“People were afraid to go to their doctors’ offices, so we thought if we brought it to campus, then they would be more comfortable,” Banks said.

District staff and school nurses sent individualized text reminders and called families to inform them of local clinics where they could get immunizations. School principals went to families’ houses if they weren’t responsive.

“It was a huge issue for us in the beginning, so we just had to be creative,” Banks said.

The number of students vaccinated has now increased to 99.5%, she said. 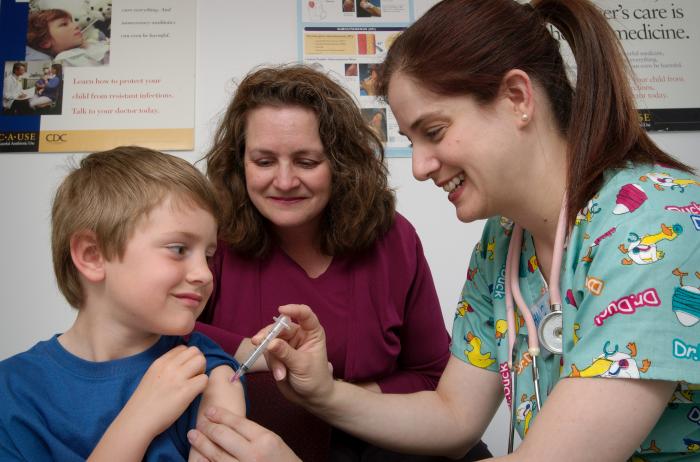 Los Angeles Unified officials credit a comprehensive immunization campaign for minimizing the decline in vaccination rates despite the pandemic. The campaign includes reminders, like fliers sent home to parents, as well as robocalls. District officials also personally contact the parents of students who need vaccines to encourage them to get their children vaccinated and to offer them resources. The district operates several free immunization clinics throughout the year.

Los Angeles Unified, the state’s largest school district, reports that 91% of kindergartners and 81% of seventh-graders have had their required immunizations. That’s down from 96% and 97%, respectively, last school year at this time.

Elk Grove Unified, the state’s fifth-largest district with 64,000 students, launches an annual campaign to get its students vaccinated each year, starting with letters to families at the end of the school year. Health assistants make calls to families almost weekly, urging them to make an appointment with their doctor or the district’s vaccination clinic.

It also promotes immunizations through messages from principals in school newsletters and through video updates on the district website.

District officials also asked Sacramento County Health Department officials to add a booth that would administer Tdap vaccines at one of its flu vaccination clinics. The immunization is required for seventh-grade students. Tdap is a booster shot generally given to children about age 11 to offer continued protection against tetanus, diphtheria and pertussis.

Elk Grove Unified compliance numbers on their first day of instruction this school year, Aug. 13, were up by 2% over last year at that time, with 94% of the students required to get immunizations doing so, according to Tami Elmatari, health services coordinator.

Lodi Unified, a district of about 27,500 students just north of Stockton, has held free Tdap clinics in both Lodi and South Stockton to encourage incoming seventh-graders to get the required shot. Outreach has also included sending messages encouraging immunizations to parents via email, across social media and on the district website, said Chelsea Vongehr, district spokeswoman.

District officials say it’s easier to get the message about immunizations to kindergarten families because they have to enroll in the schools in person, which allows staff an opportunity to talk to parents.

Once school campuses reopen for in-person instruction, any student not fully immunized must enroll in a homeschool or charter school program where students don’t attend on-campus classes. Districts, including West Contra Costa Unified will continue making it a top priority to get every student up to date on immunizations, even during distance learning.

“The worst thing that could happen is for kids to have been out of school for a year, and when we open school we tell them ‘you can’t come,’” Duffy said.