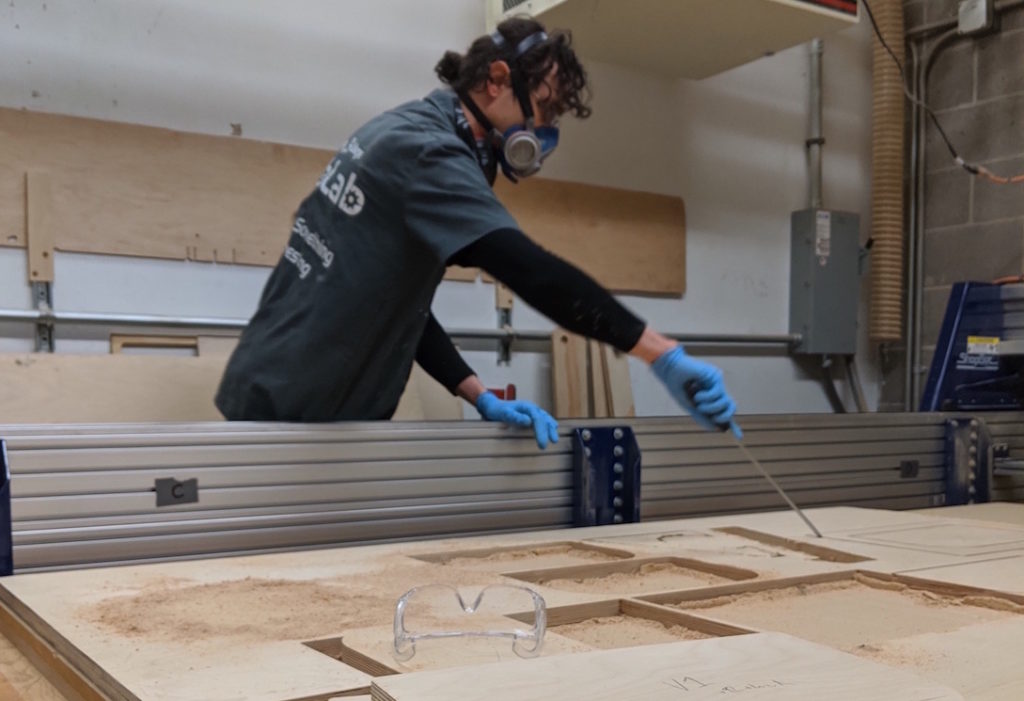 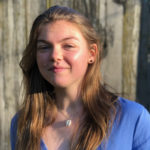 Photo courtesy of Rick Rothbart
Levi Stevenson makes die forms, which are used to shape the plastic part of the face shields, at the Laney College FabLab in Oakland.

Photo courtesy of Rick Rothbart
Levi Stevenson makes die forms, which are used to shape the plastic part of the face shields, at the Laney College FabLab in Oakland.

Career technical education programs at some community colleges around California are making practical contributions to combatting the coronavirus epidemic. Jacquelyn Opalach, a reporter with the Peralta Community College District online news platform The Citizen, writes about one such initiative at her college.

With help from students and staff, two Bay Area community colleges have mobilized to develop face shields and masks to buffer the threat of dwindling supplies as the coronavirus spreads.

“Digital fabrication is all about producing things as fast as possible,” said Rick Rothbart, lead technician of the Laney College Digital Fabrication Lab, known as a FabLab. “I can’t think of any more appropriate time in history for people with these kinds of skills to come together and create something life saving in as short amount of time as possible.”

Like others in the lab, Rothbart doesn’t teach classes but oversees the laboratories and provides help and resources to those who need assistance.

Prior to the coronavirus pandemic, the FabLabs at Laney and College of Alameda, which are part of the Peralta Community College District, invited students and community members to learn how to operate advanced manufacturing equipment and the software that accompanies it. The labs — equipped with laser cutters, 3D printers, computer numerical control routers and digital embroidery machines — are part of a global network known for education and innovation that typically serve the campuses as walk-in resource centers.

“The beauty about the FabLab is that you can take digital designs and rapidly prototype them,” said Mark Martin, a regional director of advanced manufacturing workforce development for Laney and other Bay Area community colleges.

In late March, Rothbart and fellow technicians at Laney and Alameda colleges focused on perfecting a prototype for a face shield at Laney’s FabLab.

Face shields are made of a wrap-around clear plastic barrier attached to a foam headpiece meant to protect wearers from airborne particles. They are currently in high demand at hospitals as they are used to protect health care workers from exposure to coronavirus.

Rothbart said the team tweaked an existing design, provided by a Wisconsin design firm called Delve, to accommodate adjustable straps. Next, he said, the prototype was critiqued by doctors and refined based on their feedback.

“We don’t want to create something that we think they’ll use,” Rothbart said. “We want to make sure that what we’re creating is something that they want to actually use.”

After viewing the prototype, Highland Hospital in Oakland, according to Rothbart, requested 10,000 of the face shields, dubbed the LaneyShield LS-01 design by the Peralta team.

The first 500 face shields were completed on April 3 at Oakland’s Port Workspaces, according to the Laney FabLab Instagram account. All of them were donated to the Alameda Health System, which consists of five hospitals, including Highland Hospital.

“We need the items, but also just the overall outpouring of support meant an incredible amount,” said Baljeet Sangha, vice president and chief of logistics of the Alameda Health System.

“Just to know that standing shoulder-to-shoulder, there’s our community coming in to help. That herd energy, that herd emotional support or physical support, to come in and say, ‘hey, we’re gonna try to help raise you up with this,’” Sangha said. “It’s so good. It makes people feel good and made us feel good.”

Rothbart reported that the production was a huge success. However, he also pointed out some challenges.

“We need to be able to make them even faster to keep up with demand here in the Bay Area,” he said in a video posted on YouTube. In addition, Rothbart worried that because of the foam headpiece, the shields cannot be sterilized and are, therefore, not reusable.

In the wake of these reflections, the team chose to pivot their design. The LaneyVisor, which is made of a plastic shield, plastic headband and common rubber band, is the new product. It’s modeled after a design created by Stratasys, a global 3D production manufacturer with a presence in California.

Unlike the original LaneyShield, the visor is injection molded, meaning that the headpiece is produced by pouring thermoplastic into a mold.

“The advantages here are that injection molded parts are super fast to make and they’re super cheap,” Rothbart said in the YouTube video.

In addition to producing the masks, Rothbart said that the designs for both the LaneyShield and the LaneyVisor are posted online for free public access.

While the team would have liked to mass produce face shields at the Peralta FabLabs, they faced barriers in the form of limited production capabilities and raw material shortages. They have limited access and significant time constraints because campuses are open to staff for essential purposes for only eight hours a week during shelter-in-place orders.

“Most of the machines that we have are not quite the industrial scale needed for doing mass production,” said Danny Beesley, a contractor affiliated with the Peralta FabLabs.

If they were to produce at the FabLabs, they would have to use laser cutters to manufacture the shields and a 3D printer to make the headpiece, and neither machine works quickly. So the team looked for other production venues.

“It would be pretty hard to keep up with any demand that a hospital would need,” Rothbart explained. “So that’s why we’re turning towards local partnerships with other companies that can do this for us.”

So far, one fruitful partnership has been with Oakland-based Automatic Art, which has die cutters, a machine that can stamp out dozens of face shield parts per minute.

Another partnership is with Wright Engineered Plastics, a Santa Rosa company that offered to produce and donate the injection mold needed for the headpiece of the visor. It took about three weeks to complete, and is now undergoing a testing period. In a video update posted to YouTube on April 22, Martin said that full production should get going in the first week of May. Rothbart said that the mold will have the capacity to produce 18,000 LaneyVisors per week.

Each mask, Rothbart reported, costs about two dollars and fifty cents to produce. To pay for the shield materials, the team is asking for $25,000 in donations via a GoFundMe account. As of this week, they have almost reached their goal, having raised $23,351. The money will be sent directly to Wright Engineered Plastics, where the LaneyVisors are being produced. All completed products will be donated to Highland Hospital and other hospitals that request supplies.

Students will have the opportunity to be involved, as well. Beesley said that they’ve reached out to students enrolled in the Peralta Apparel Design and Manufacturing (ADAM) program to see if they are willing and able to sew surgical masks and gowns from home. A number of students stepped up and have been producing from home since late March.

One of those students, Elaine Wu of the College of Alameda, said the process of producing and distributing masks is time-consuming — and collaborative.

Wu said that Bay Area volunteers, including those working with the Peralta College FabLabs, are affiliated with a Facebook group called Make Me PPE Bay Area.

For example, she said, mask materials are pre-cut with laser cutters and put into kits. At first, the kits were made by the College of Alameda FabLab, but with increased community volunteering, Wu said that the Facebook group coordinators have taken over making and distributing them.

The kits are distributed to volunteers — both students and community members — via contactless drop-off coordinated by the Facebook group. Once completed, masks are picked up with the same system. The masks are sanitized and then distributed to local hospitals and nursing homes, as well as to police officers and other essential workers.

“Here I am, just a student sewing masks, but I am like a speck of dust compared to everything else that is going on,” Wu said. “And it is just like, wow, such a show of humanity.”

“I just have to say I love my teachers. The quality of education that I’m getting is amazing,” Wu said. “I could not be sewing what I’m sewing without that education.”

Their contributions will be remembered, Alameda Health System’s Sangha said. “We’ll look back and realize that the Laney college team leaned in and stepped in with us in a way that we are very, very lucky and very humbled to have seen.”

Jacquelyn Opalach is a student at Laney College in Oakland and reporter for the campus newspaper, The Citizen.