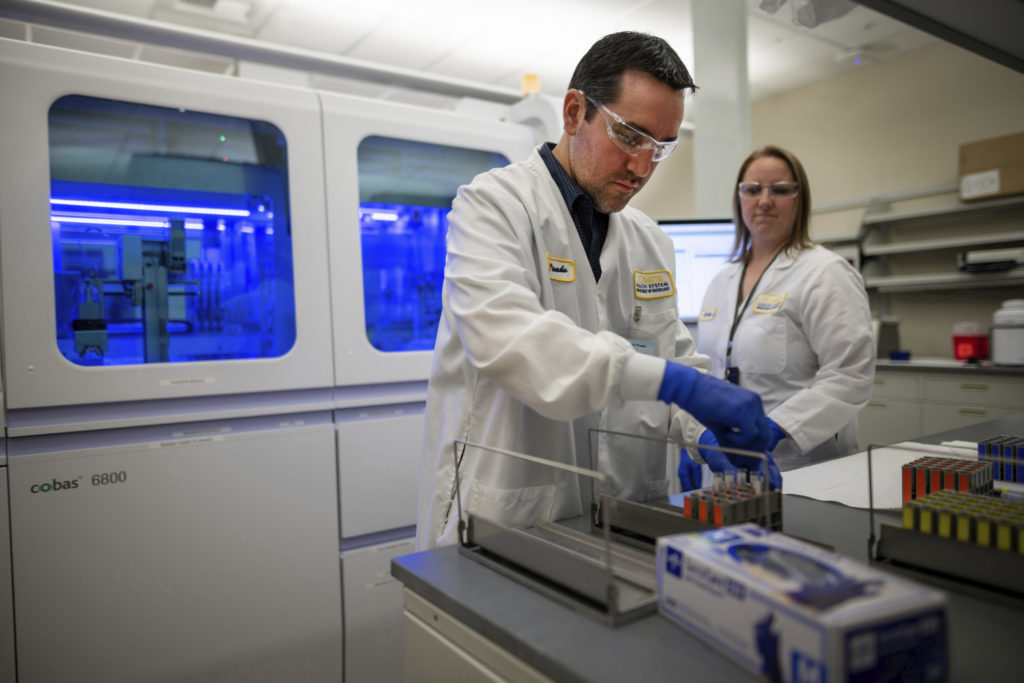 With non-essential research on hold, scientists at the University of California and private universities focus on COVID-19. 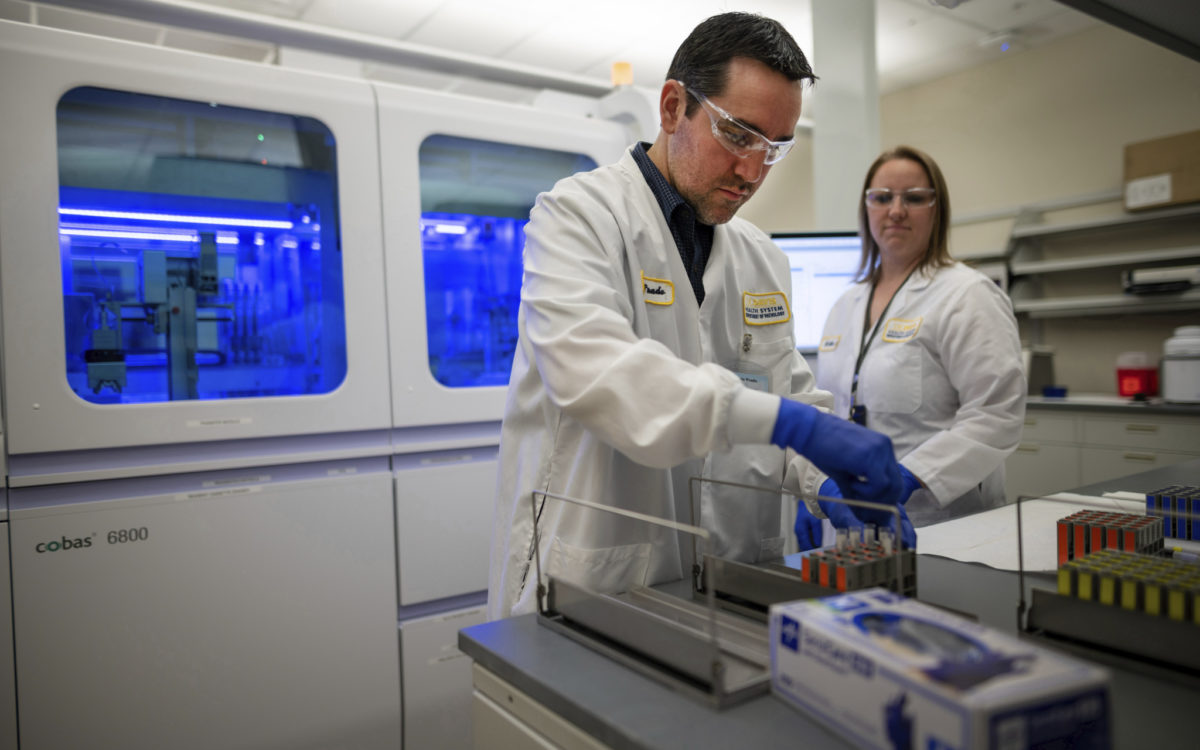 Courtesy of UC Davis Health
UC Davis scientists Marcelo Prado and Katie Zegarski load samples onto trays that will then be placed into a machine to test for coronavirus. It's one example of the vast research ongoing across the UC system to study the coronavirus.

Courtesy of UC Davis Health
UC Davis scientists Marcelo Prado and Katie Zegarski load samples onto trays that will then be placed into a machine to test for coronavirus. It's one example of the vast research ongoing across the UC system to study the coronavirus.

Researchers at universities across California are playing a major role in the global effort to find a cure and slow down the spread of the novel coronavirus.

The University of California, with five medical centers and major research capacity on its 10 campuses, is well-positioned to contribute to that effort, while private universities like Stanford University, with its own research departments and medical school, are also working to understand and treat the disease.

With non-essential research suspended, many scientists are focused almost exclusively on fighting the virus and are doing so in a variety of ways. Doctors are working to increase the capacity to test individuals for coronavirus while also evaluating drugs to determine if they can be used as effective treatments. Virologists are studying the genetics of the virus to learn more about how it spreads and attacks human cells. There are also more niche efforts, such as a project at UC Berkeley that intends to use artificial intelligence to combat the virus.

There is an urgent need for scientists to learn as much as possible about the virus and slow its spread. Globally, the toll from the coronavirus has surpassed 116,000 deaths, according to a Johns Hopkins University tracker. That includes more than 300 deaths in California.

One of the leading sites for coronavirus research in California is at UC Davis, where many researchers have been studying the virus nonstop since February. That’s when the university’s medical center treated the patient who had the first diagnosed case of community spread coronavirus in the United States, meaning the patient, who had not traveled to countries where the virus was common at that time, had been infected from someone in the community.

Researchers took samples from that patient and used them to investigate the virus and begin developing their own in-house test.

UC Davis began in-house testing March 19 and is now using an automated testing system that has the potential to produce more than 1,000 tests daily, Haczku said. There is a shortage of coronavirus testing nationally, and experts say that expanding testing would make it easier to slow the spread of the virus since doctors would have a better idea of who is infected.

The automated testing at UC Davis is made possible through a robot called the “Roche Diagnostics cobas 6800 System.” The machine, which is the size of an SUV, is already producing 400 tests a day for patients at UC Davis Health and that number could increase to up to 1,400 tests daily.

Haczku said she has dedicated almost all of her time over the past month to coronavirus-related research focused on expanding testing and on clinical trials, which involve testing drugs on patients to learn if they can work as effective treatments. UC Davis is currently conducting clinical trials of two drugs: remdesivir, an antiviral drug that was previously tested on patients with Ebola, and sarilumab, which treats arthritis.

Haczku’s days start with 7 a.m. meetings with other School of Medicine administrators and end around midnight after connecting with research collaborators in Asia.

“Seeing what this virus does to people, there is a motivation to work fast,” she said.

The other four University of California medical centers — at UCLA, UC San Diego, UCSF and UC Irvine — are also either doing their own in-house testing of the coronavirus or plan to soon. The five medical centers hope to combine resources, such as patient databases, to develop better testing and clinical trial capabilities, but they first need to get approval from a UC Institutional Review Board, Haczku said. Institutional Review Boards are regulatory committees that oversee research involving humans to make sure the research is ethical.

Globally, more than 200 clinical trials of different drugs are underway. One of those trials involves all five of the UC campuses with medical centers. They are among dozens of universities conducting a trial of remdesivir, an antiviral drug that scientists believe has potential to be a treatment for the virus. Stanford University is also participating in that trial. In clinical trials, drugs are administered to patients who give consent to participate in the trial after learning about any potential risks.

Dr. Bruce Aylward of the World Health Organization in February called remdesivir the “one drug right now that we think may have real efficacy.” President Donald Trump has also touted remdesivir, saying in March that the drug “seems to have a very good result having to do with this virus.”

However, remdesivir is not yet an approved treatment of COVID-19, the disease the virus causes. The Food and Drug Administration has authorized its use in emergency situations for some coronavirus patients, including the first United States patient who was diagnosed with coronavirus and the UC Davis patient who was diagnosed with the first community-acquired case of the virus in the U.S. UC Davis doctors in February gave the drug to that patient, who recovered after receiving remdesivir and has since been discharged, though doctors have warned against drawing conclusions about the drug based on a single patient’s experience.

Doctors will get a better sense of whether the drug is effective through the clinical trials. Patients will be eligible to be enrolled in the clinical trial if they test positive for COVID-19 and if they are being treated at one of the testing sites, such as one of the UC medical centers or Stanford.

Patients will be randomly assigned to receive either remdesivir or a placebo. The National Institutes of Health, the federal agency that is sponsoring the trial, will analyze results from the different testing sites and determine whether the drug is effective, said Dr. Neera Ahuja, who along with Dr. Kari Nadeau is one of two Stanford doctors conducting the trial.

A major advantage of the study, Ahuja said, is that if remdesivir proves to be ineffective, doctors can continue with the same trial infrastructure and easily switch to testing another drug. That’s because the study has an adaptive trial design, which is meant to make a trial more efficient by allowing changes to the study while it is ongoing.

“And so unlike some of the other industry-sponsored trials where it’s just one drug and that’s all they have, we can phase from one to the next to the next until we hopefully find something effective and then be able to hopefully fast track it to FDA approval,” Ahuja told EdSource.

Remdesivir is far from the only drug being studied to fight the coronavirus.

Researchers at UC San Francisco’s Quantitative Sciences Bioinstitute are looking into dozens of other drugs that could attack the virus in a different way.

While drugs like remdesivir seek to destroy the virus’s own proteins, researchers at the Quantitative Sciences Bioinstitute have identified drugs that could potentially treat the virus by blocking it from interacting with proteins in human cells that the virus relies on to survive.

“There’s a lot of work ongoing where people are trying to target the viral proteins, which is great. We’re taking a different track,” Nevan Krogan, the director of the institute, said at a virtual town hall in March.

So far, they have identified 69 drugs that could target the human proteins, including 27 that are FDA-approved.

The reason scientists are studying so many different drugs is because the current coronavirus is new to scientists and there is still much they don’t know about it.

Virologists like Mike Buchmeier at UC Irvine’s Center for Virus Research are attempting to address that dilemma by studying exactly how the virus is spreading.

Buchmeier, who specializes in researching coronaviruses, has been researching the virus since it was discovered in China in December. Officially called SARS-CoV-2, it is a new strain of coronavirus, which is part of a large family of viruses that commonly infect many animals, including cats, cattle and bats.

In rare cases, such as with the current virus, coronaviruses can spread from animals to humans and then spread to other people, according to the Centers for Disease Control and Prevention. Health experts believe the new strain of coronavirus likely originated in bats and first spread from animals to humans at a seafood and meat market in Wuhan, China, where the outbreak began.

“And then we can use that to think about what would be a suitable vaccine,” Buchmeier said.

Elsewhere across universities in California, other efforts are underway in response to the virus. For example, UC Berkeley is one of the hosts of a new artificial intelligence research consortium that is seeking research proposals that offer ways to fight the coronavirus.

The consortium, called the C3.ai Digital Transformation Institute, was created by California-based artificial intelligence company C3.ai and will be managed and hosted by UC Berkeley and the University of Illinois at Urbana-Champaign. One of the institute’s co-directors is Shankar Sastry, a professor of engineering and computer science at UC Berkeley.

Early results from the research won’t be available until June, but the work of other artificial intelligence companies internationally may provide a glimpse into how the technology can be used to fight the virus.

For example, the United Kingdom-based artificial intelligence company Exscientia has a collection of thousands of drugs and is using its technology to try to determine which ones can potentially treat COVID-19. Exscientia plans to use its drug-screening technology to quickly mine through the drugs and identify molecules that may be effective in fighting the coronavirus’s proteins and enzymes. The company then hopes to use that information to repurpose one of the existing drugs to treat coronavirus patients.

The Berkeley institute is calling for a wide range of proposals to combat the virus, such as using machine learning to design new drugs or incentivize behavior that mitigates the spread of the virus, like social distancing.

Given the urgency of the challenge, the institute accelerated its timeline by putting out the first call for research proposals in March and asked for the proposals to be submitted by May 1. Awards will be distributed by June, but researchers who submit their proposals by April 15 could be notified of awards earlier than that.

The institute also plans to use a peer-review process that is less rigorous than is customary so it can further expedite the project and share results with the public as soon as possible. The consortium plans to start disseminating results via public forums in June. “What we’d like to do here is to provide for a certain adventurousness. We won’t be afraid to have even a substantial fraction of the research projects fail,” he said.

Sastry added that he views the institute as something that could be an intermediary between the computer science world and the public health field. “I feel there’s a huge new subject of academic inquiry here. And so I think that to have an intermediary between information technologies and all these societal systems, I think that’s the intellectual turf of this institute. That’s really a prime excitement to me,” Sastry said.