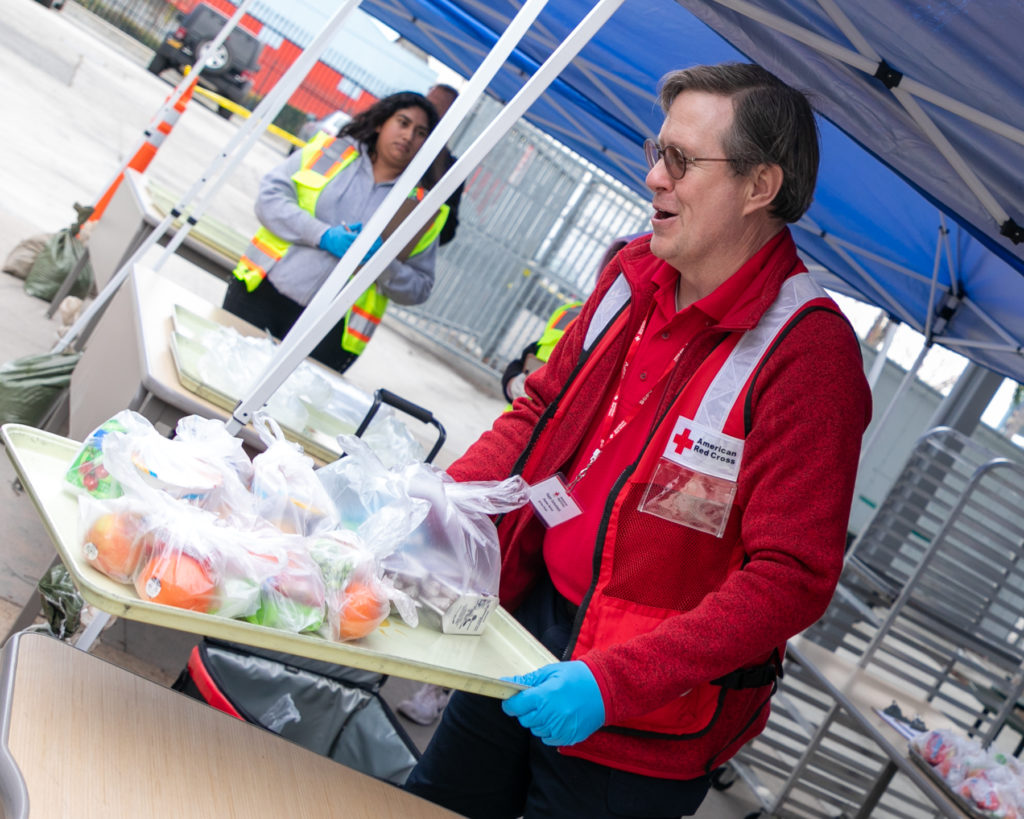 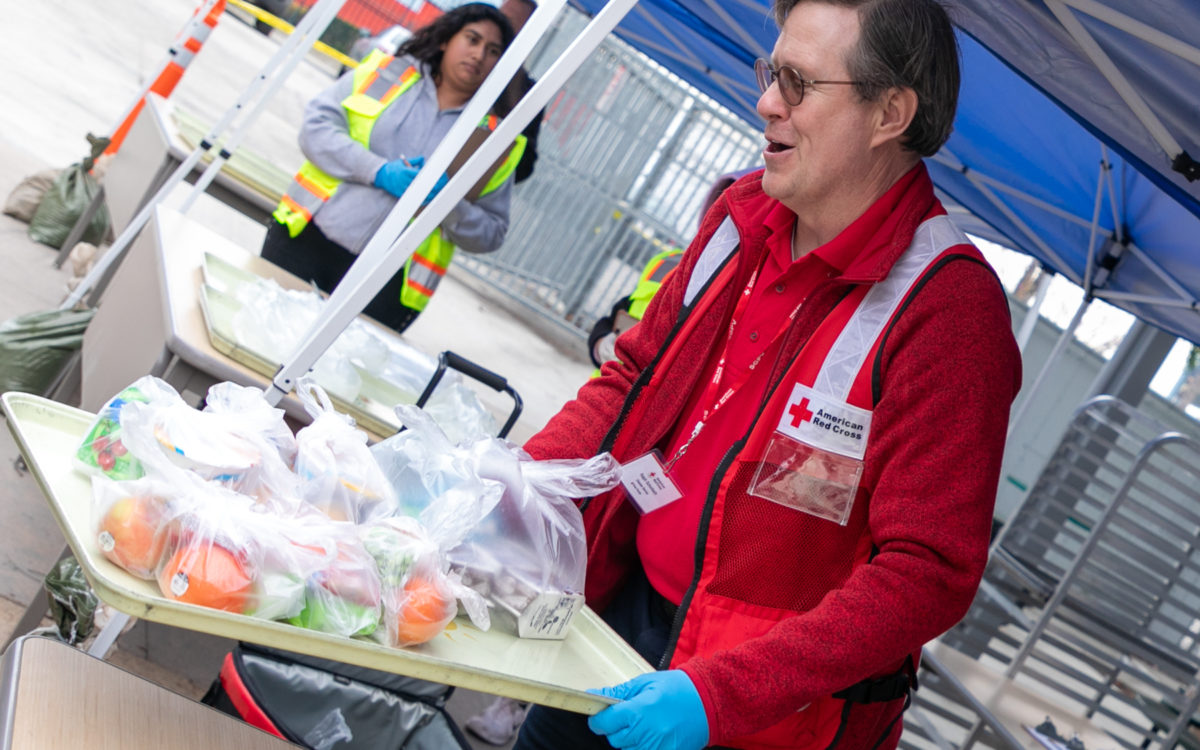 As thousands of parents struggle to put food on the table during the coronavirus pandemic, California food banks are partnering with schools to feed children, as well as their families.

With schools shut down across the state, districts are serving “grab and go” meals to students in an effort to stop the coronavirus spread. Many have also allowed food banks to distribute boxes of groceries at the school sites. The largest effort is underway at the Los Angeles Unified School District, which has partnered with star chef Jose Andres and other organizations to provide meals for both students and their parents.

“We know entire families are going hungry, so when families are going to the school district, there may be others in the household who need food as well,” said Andrew Cheyne, director of government affairs for the California Association of Food Banks. “Schools in this environment have become a bright spot — they are known, trusted, highly accessible locations that families are used to visiting.”

Food banks’ partnerships with school districts have been so effective that the California Association of Food Banks — which represents more than 40 food banks throughout the state — is recommending its members “co-locate” at school sites to deliver groceries and meals, Cheyne told EdSource.

Los Angeles Unified — the largest school district in the state — distributed more than 2.3 million meals to both students and their parents in its first week and a half of opening around 60 “Grab and Go Food Centers” between March 18 and March 27, district officials said. Recipients can grab a breakfast consisting of cereal, dried fruit, applesauce and milk and a lunch — a ham and cheese, turkey or PB & J sandwich, sunflower seeds, fresh fruit, juice and milk.

The district has added four more Grab and Go Food Centers, which are open from 7 a.m. to 11 a.m. and staffed by hundreds of volunteers coordinated through the American Red Cross.

To keep everyone safe… @WCKitchen @LASchools @RedCrossLA teams in LA are loading meals into back of cars! Smart! This is today at Roy Romer Middle School….5,000 meals served here! #ChefsForAmerica #AmericaEatsNow pic.twitter.com/NQtSOtwWaf

“Schools are the center of the communities we serve and provide an important part of the social safety net for many students and their families,” LA Unified superintendent Austin Beutner told EdSource via email. “On an ordinary school day, we serve more than 1 million meals to children. These are not ordinary days, and we must continue to support those most in need.”

Cheyne said Food Banks throughout the state have reported that the demand for food continues to dramatically increase as the coronavirus continues.

“Food is an early indicator of economic distress that’s happened in every recession, and we may be seeing it again,” Cheyne said.

The California Department of Education has created an app which will direct parents and students to emergency school meal sites throughout the state. And Stanford University students participating in the Big Local News data project have collected detailed information on food distributions in the Bay Area.

The SF-Marin Food Bank has set up “food pantries” at five schools in San Francisco, where volunteers are passing out boxes and bags to families consisting of fresh produce — such as carrots, onions, potatoes, pears, apples and bananas — a bag of rice, cans of soup, a carton of eggs and frozen meat such as pork loin or chicken, said Tina Gonzales, Director of Community Partnerships for the food bank.

“We’re bringing people into these hubs as a one-stop-shop, so it limits their exposure time outside of their homes,” said Irene Reynolds, Director of Nutritional Services for the Oakland Unified School District.

Grab-and-go stations are set up in 12 Oakland Unified schools, where students and families can pick up the district-provided meals as well as Food Bank grocery bags and supplies on Mondays and Thursdays. The district operates the sites from 8 a.m. to noon — Reynolds said that’s to leave a large enough window for people to come so a line doesn’t build up. Volunteers wear masks and gloves, and at some sites the food is set up so families can walk up and pick it up themselves and not come into contact with other people.

After two weeks, the district has served 253,000 meals, district spokesman John Sasaki said Friday. Reynolds said the demand continues to grow as word gets out about the free food. On the first day of distribution, the district served 25,000 meals to 4,100 students, and by the third day it served 100,000 meals to 11,000 students.

Schools in West Contra Costa Unified allow parents to drive up to distribution sites, so they can pick up meals for their children without having to leave their car.

According to information compiled by students in the Stanford University Big Local News project, there are more than 400 sites in 10 Bay Area counties where families can obtain food. The students created a map that is being continually updated with details on when food distributions are available and which sites are working with food banks. 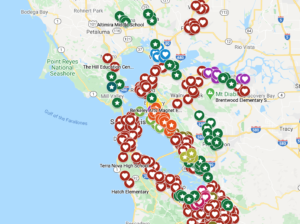 During the school closures, the Central California Food Bank is keeping up its “backpack program” — in which students are provided a backpack at the end of the week with enough groceries to last through the weekend. The food bank, on Thursdays, supplies 250 bags of groceries each to Calwa and Lane elementary schools in the Fresno Unified School District for families to pick up and 150 bags of groceries to Calvary Worship Center on Fridays for families from Centennial Elementary school, said Central California Food Bank spokesperson Robin Allen-Maddox. Cheyne said schools and food banks will likely lean on each other even more as the crisis continues.

The food supply is not a concern for food bank operators, he said. Tracy Weatherby, vice president of Second Harvest of Silicon Valley — a food bank hub that assists districts in Santa Clara County — said supply isn’t a concern for schools either.

One worry both Weatherby and Cheyne shared is that distribution may get harder as the demand for food grows. Weatherby said healthy practices among volunteers — such as frequently washing hands, wearing face masks and maintaining six feet of distance between each other and the public — are crucial, and could be harder to keep up with more and more customers.

Finding enough “low risk” volunteers — who are younger than 65 and who do not have underlying health conditions — could also be a challenge as coronavirus cases grow.

“Those partnerships are there and those relationships are there but it may be an open question if there’s enough resources and capacity to continue them,” Cheyne said.