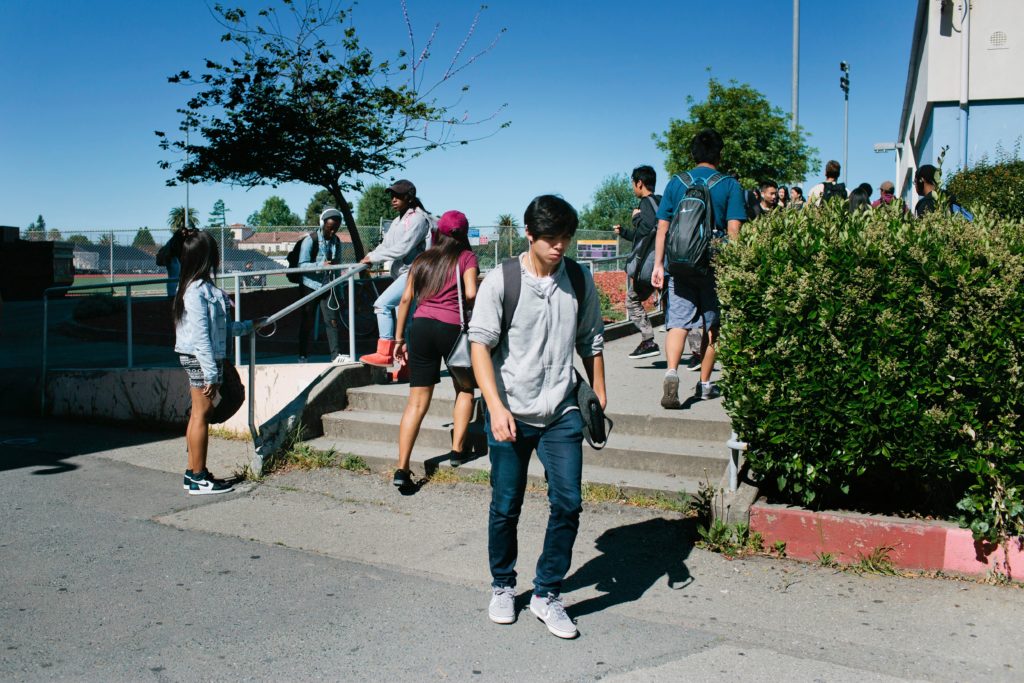 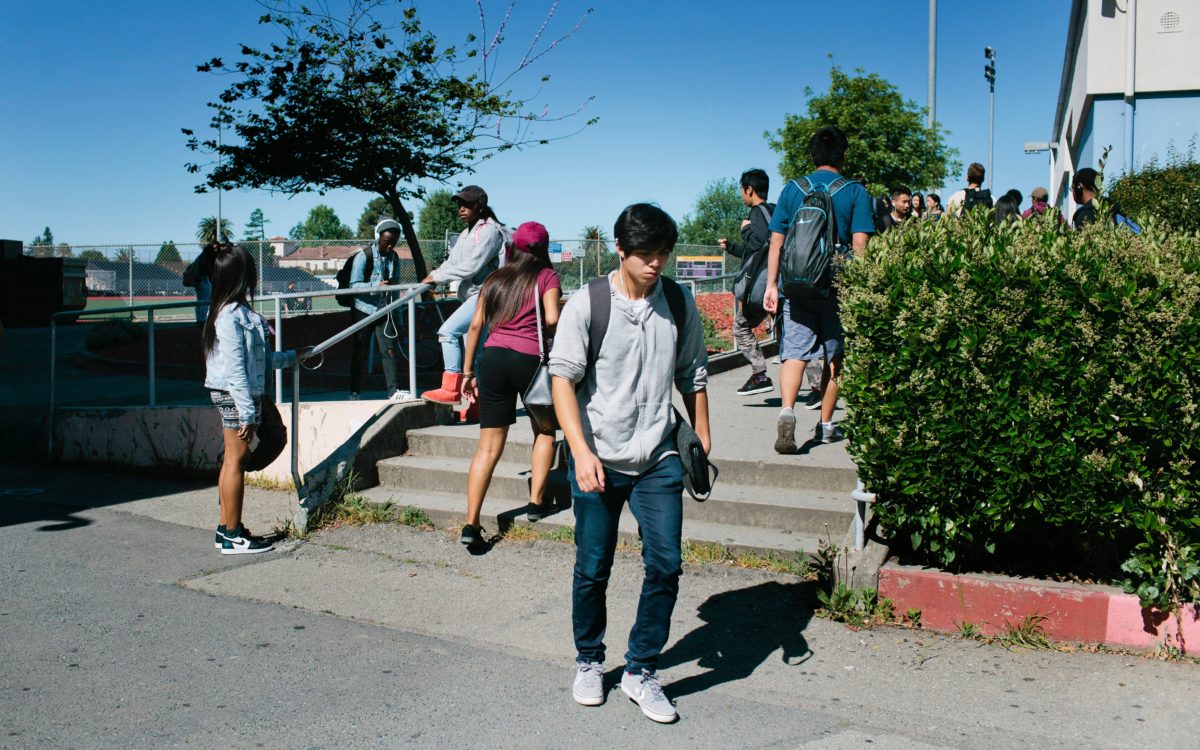 When Amistad continuation high school closed its campus in March due to the pandemic, the staff went into overdrive to stay in touch with students. They called all 205. If a student’s phone was disconnected, they went to the student’s house. If no one answered, they asked neighbors.

“The effort was relentless,” said David Gustafson, principal of the public school in Indio, near Palm Springs, that serves students who’ve been expelled or are at risk of dropping out of traditional schools. “Our staff was working seven days a week, 10 to 12 hours a day, to keep these kids connected to school.”

Amistad High is typical of California’s 430 alternative schools in its commitment to keeping track of students during the pandemic — students who are at especially high risk of dropping out, said Gerardo Abrica, president of the California Continuation Education Association and a math teacher at an alternative school in Tulare County.

In fall 2019, about 133,000 students in California attended alternative schools, which are public high schools for students who have been expelled or are at risk of dropping out of traditional schools, are pregnant or parenting, or need flexible schedules due to work. Alternative schools include continuation schools, independent study programs and community day schools, which serve students who’ve been referred by parole or attendance boards. Alternative schools vary in their approach, but typically have smaller classes, flexible schedules, counseling and mental health services, and a focus on student-teacher relationships. Some are run by districts and others are run by county offices of education.

Although they serve a small portion of California’s 6 million K-12 students, alternative schools play a crucial role in educating students who might not otherwise graduate from high school. And as campus closures continue into the new school year, that role is heightened, Abrica said.

“As educators at alternative schools, we work with some of the most at-risk youth, and we want to make sure our kids are not forgotten or marginalized,” Abrica said. “Our drive and sense of duty to our kids is revealing itself during these extraordinary times. … Our fear is without adequate support during this pandemic, we could see a large number of dropouts in the next few years.”

Teachers and administrators — even clerks and custodians — have been working almost nonstop to keep in contact with students, in hopes of preventing an especially vulnerable population from dropping out of school.

Dropout data related to campus closures in response to the coronavirus pandemic won’t be available until next spring, but some alternative school principals say their enrollment since campuses closed for in-person instruction has dropped significantly.

But more worrying, principals said, is that during the pandemic some students stopped logging in for class or responding to school inquiries, despite teachers’ best efforts to stay in contact.

Principals believe some students have left school to support their families or look after younger siblings, or have moved in with relatives because their parents have tested positive for Covid-19. A disproportionate number of students in alternative schools nationally are low-income, Black or Latino, and adults in those groups are more likely to contract the virus, according to the Kaiser Family Foundation.

Even before the pandemic, many students in alternative schools were at risk of dropping out, said Jorge Ruiz de Velasco, deputy director of John Gardner Center for Youth and Communities at Stanford University. Often it was students’ relationships with sympathetic teachers that kept them tethered to the education system at all, he said.

“These are students who aren’t just disconnected from school, they’re often disconnected from friends and families, as well,” he said. “The alternative school might be their center of gravity, and now, suddenly it’s gone.”

Some alternative schools have focused on technology, using apps that translate classwork and messages into multiple languages for students or parents who don’t speak English well, or apps that require low bandwidth so are easier to download for students who have unreliable internet access. Some schools have adapted all classwork and communications to mobile phones, because so many students lack tablets or laptops.

One school, Rudsdale Continuation School in Oakland, launched a donation drive for students and their families, most of whom are recent immigrants.

“What we’re seeing is that in a lot of communities, the school is a kind of first responder,” Ruiz de Velasco said.

“For a lot of our students, coming to school has been an escape from a stressful home environment,” Antonelli said. “But now they have no escape.”

At Antonelli’s school, staff has tried to check in every day with students during the pandemic. If a student doesn’t respond to texts, emails or phone calls, teachers will try to track down the student’s siblings or friends.

So far, the school has lost contact with about 20-25% of its students, Antonelli said. He expects that number to rise this fall, but anticipates an explosion in enrollment when campuses reopen as more students in traditional schools fall behind academically or have discipline problems related to trauma or stress.

“I find I don’t sleep very well,” he said. “I am really concerned about the well-being of the kids.”

At Daily continuation high school in Glendale, teacher Jamie Alarcon has tried hard to maintain the personal relationships she’d developed with students and their families before the pandemic. She has called every parent and regularly emails her 80 students and their families. When she realized some parents don’t know how to use email, she sent a video tutorial. She sends out class newsletters in English, Spanish and Armenian, a common language in her district just north of Los Angeles. And when the spring quarter started, and she had new students, she made a personal welcome video introducing herself.

“It’s a whatever-it-takes mindset,” Alarcon said. “We don’t see it as saving one student. We see it as helping an entire community, because when one of our students stays in school and graduates, it’s a win for the entire city.”

By the end of the 2019-20 school year, the dropout rate for Daily school was about what it’d be normally, around 7.5%, she said. And some students actually seemed to prefer online learning, because the school environment had been stressful for them.

She’s been gratified that so many students made the effort to finish the school year despite significant obstacles. But she’s not sure what to expect when school begins.

“Do I worry? I worry about my students all the time,” she said. “That’s something that hasn’t gone away.”

In the Orange County Department of Education alternative education division, principal Vern Burton and his staff are working up to 18 hours a day, visiting students’ homes and answering emails, with an eye out for signs of domestic violence or substance abuse in a student’s family. If they suspect anything, they bring in counselors or notify law enforcement if necessary.

In addition, the staff has been hosting Zoom meetings for parents, including a positive discipline class in Spanish that 25 families signed up for. Burton’s school has also partnered with a local food bank and hosted a drive-in graduation ceremony in a church parking lot.

He’s considering arranging outdoor classes this fall, so some students can attend school in person. Anything to keep students connected to school, he said.

“The struggle is getting kids engaged. Remember, these are kids who weren’t engaged in school to begin with,” he said.

He and his staff are exhausted and stressed, he said. But he knows it’s nothing compared to what his students and their families are experiencing.

“I may be working 18-hour days, but at least I have a job. There are a lot of people out there less fortunate than me,” he said. “The way I see it, I can’t cure coronavirus, but I can do something. I can get food to our families.”

At Amistad High where Gustafson works, enrollment has dropped from about 200 in March to between 75 and 100 in June, when the school year ended, he said. Many of those students graduated, but 15 to 25 have stopped responding and staff can’t locate them.

Staff tracked a few students all the way to Mexico and El Salvador, where students had moved in with relatives while their families in the U.S. look for jobs or battle Covid-19.

Even when living more than 2,000 miles from school, the students still tried to log in to class every day, he said. And when they ran into problems with their internet service, teachers sent their classwork in the mail.

“Every kid on our campus has a story,” Gustafson said. “If we want to help them, we need to listen to those stories and do what we can to help each student individually. That’s the key to all of this — flexibility and compassion.”

Gustafson and his staff have been working through their vacations to contact as many students as possible before school starts in mid-August. If all goes well, he’s hoping for 150 students in the fall.

“This is hard work. We have students who live and breathe trauma, and live in incredibly challenging situations,” he said. “But that’s what our commitment is. … We aren’t going to rest until we find all of them.”