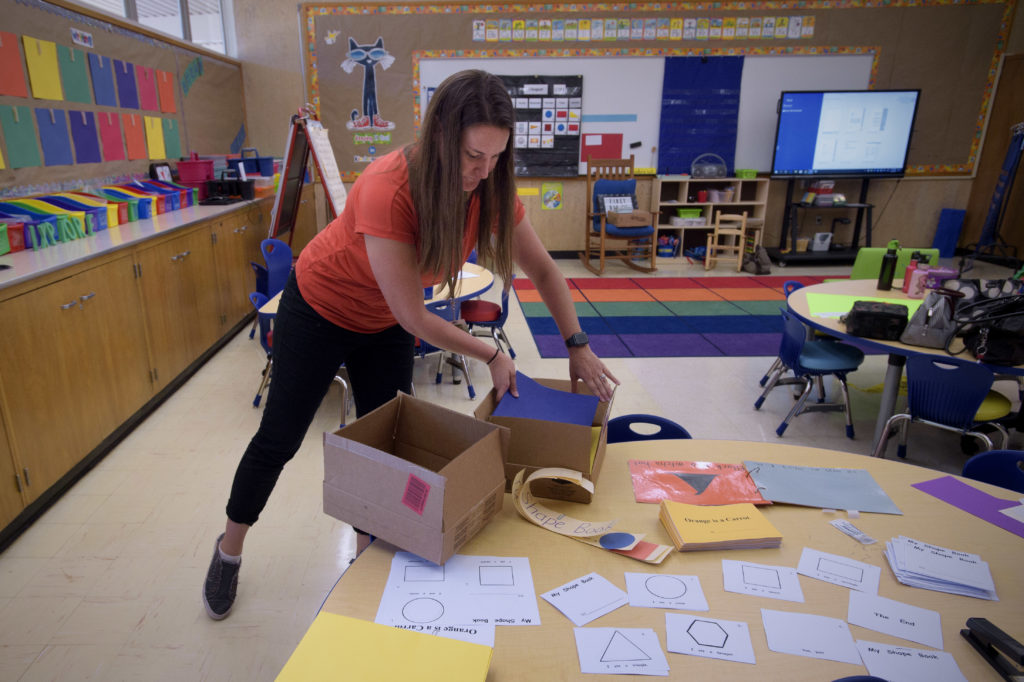 Teachers, administrators and volunteers worked all summer to prepare the schools for students 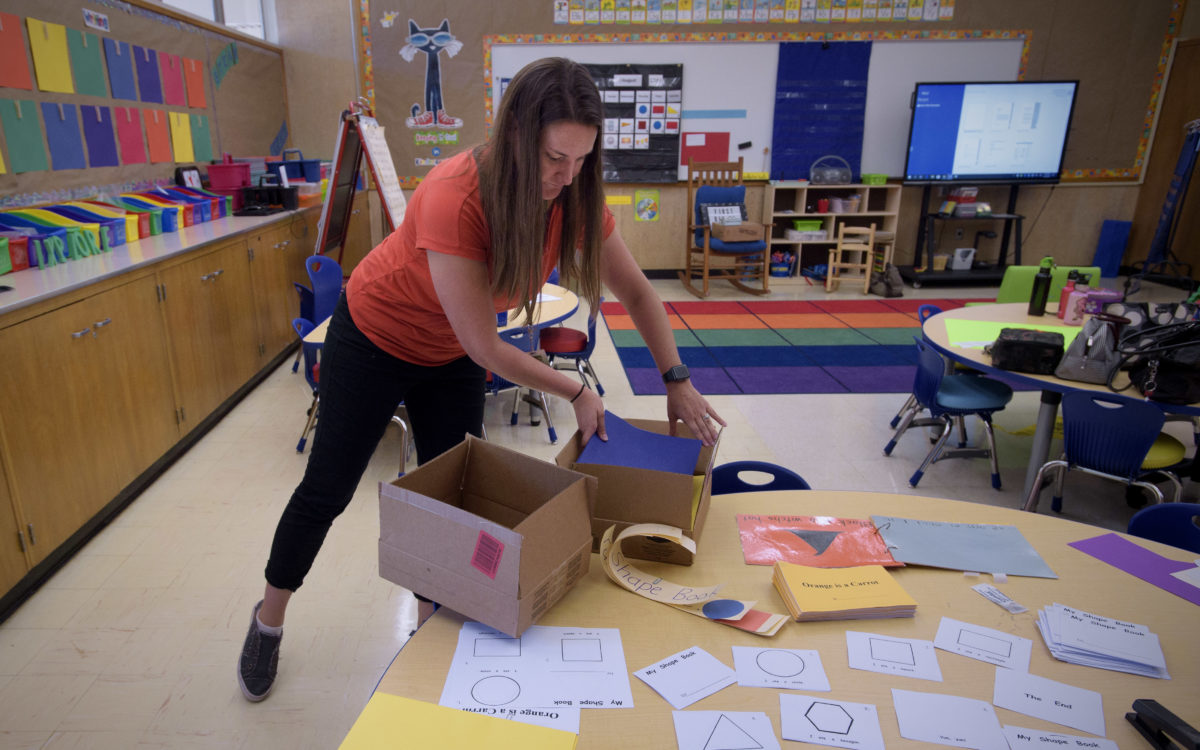 Schools reopen in Paradise today, but nothing is the same. The Camp Fire changed everything nine months ago when it roared through the town and neighboring communities, killing 86 people, destroying thousands of homes and four schools.

Many of the 1,000 students who are expected to return — about a third of the student population of a year ago — will be coming on buses from their new homes in Oroville, Chico and Durham. Many of their former classmates and teachers have moved away.

As she prepared for the new school year, Lisa McCreary was unpacking again. The kindergarten teacher has moved her classroom twice since she drove away from Ponderosa Elementary School, then ran through a tunnel of smoke and flames on Nov. 8 after being told to evacuate.

She and other teachers at the newly named Paradise Ridge Elementary School have spent much of the summer hanging posters, decorating bulletin boards and rearranging desks in an effort to convert Paradise Intermediate School into a welcoming environment for students from the former Paradise and Ponderosa elementary schools.

“I’ve never worked so hard to get a classroom set up,” said McCreary, who has been at the school every day since July 13 scrubbing it clean and transforming it into a kindergarten class.

With just three days to go until the students burst through the front door, the campus was filled with activity Monday. Outside, bulldozers moved dirt into piles, concrete was being poured and doorways and doors painted. Across the street a chain link fence surrounded a parking lot, a blacktopped playground and newly leveled soil that once was Paradise Elementary.

But there are a few new, shiny things as well. Insurance money and donations are allowing the district to get some badly needed technology upgrades that include electric buses and interactive televisions.

Administrators, school staff and volunteers have been working 12- to 15-hour days, seven days a week since the fire trying to bring the students — scattered from Gridley to Chico and beyond — back to the five remaining Paradise schools that weren’t destroyed in the fire, said Michelle John, district superintendent.

“We had so much help it wasn’t even funny,” John said. “Groups have been coming in to help paint and clean up and put furniture together and do yard work.”

John said that help has come from the community of Paradise and from communities throughout the region. “We couldn’t have done it without everybody’s help,” she said.

With four of the nine campuses in the district destroyed and others badly damaged, rearranging classrooms to accommodate the students and teachers who are left has been challenging. To make it work, district leaders combined Paradise Intermediate and Paradise High School and put the former students of Paradise Elementary and Ponderosa Elementary into the intermediate school.

There have been some snafus. Initially Ridgeview High School was set to move into the Ponderosa Elementary School site, which was damaged but not destroyed, but couldn’t when maintenance officials discovered the power box had been fried in the fire. They found space for the high school on a campus adjacent to Pine Ridge School, serving kindergarten through 8th grade, in Magalia, a little town to the north of Paradise that is part of Paradise Unified.

Because fires often leave behind toxins in water, air and soil, they were tested at all campuses and found safe before students were allowed back. This week workers were hooking up water filtration systems that John said were not needed, but were installed to assuage parent fears.

But the item that has garnered the most excitement from teachers are the large interactive televisions sitting at the front of each of their classrooms.

“The technology is amazing,” said McCreary, explaining that teachers can project worksheets onto the screen, draw or write on the touchscreen and use it to show students movies or YouTube videos.

“We are so new and improved,” John said. “We are a destination district. Come on up.”

But there may not be a need to entice more families to enroll students. There are signs that student attendance may surpass the 1,020 experts predicted for the district this school year. John was told to expect about 30 percent of her 3,401 students to return, but last week district schools reported a steady stream of parents showing up at schools to enroll their children.

John said she isn’t sure where the students are coming from, but suspects that some are new to the area, while others may be re-enrolling as families begin to rebuild their homes. Many of the students enrolling in the two elementary schools in Magalia are former Paradise residents who moved there after the fire destroyed their homes, she said.

Still, John doesn’t expect anywhere near the enrollment of previous years. “I know a lot of people had to move over the summer and get their kids some stability somewhere,” she said.

Nothing was left of the kindergarten wing of Ponderosa Elementary where McCreary was when the fire erupted. Monday the kindergarten teacher sat in a small blue chair in a room filled with toys, books and colorful bulletin boards ready to be filled with drawings, writing examples and math assignments.

The new furniture and many of the supplies were purchased by the school district. But some of the books and supplies, and the classroom carpet children sit on during story time, were courtesy of donations, including a Go Fund Me account set up for the five Ponderosa Elementary kindergarten teachers.

Donors also came through to replace football helmets and gear, as well as golf clubs, for high school athletes that lost them in the fire. “The fire broke out the night before a playoff game and the kids had all their gear at home,” John said.

This week David Smith, a teacher and president of the Teachers Association of Paradise, has been moving into his new classroom in Magalia. After the fire, Ridgeview High shared space with the Boys and Girls Club of Chico. “We basically had to unpack and pack up every day,” before the Boys and Girls club activities started after school, he said. “We ended up getting roller bins. I’m glad that is over.”

Monday, he stood on the recently cleared patch of land that once was Ridgeview High School in Magalia and talked about the loss. “It’s our second home as teachers, so it’s a little gut wrenching to see it completely wiped out,” he said tearfully. “I came before there was the fences here and I was able to walk through and try to find anything that was left and the only thing I could find was some ceramic things the students brought for me. It’s a little devastating.”

Smith says he takes time in his class to allow students to open up about loss. “When those tragedies happen and something as devastating as the whole town burning down, it just brings everybody together and creates a bond with people,” he said.

The school district is also providing resources to deal with trauma. It has hired an additional counselor for each school to help students and staff, many of whom lost homes, friends and families.

Smith and McCreary are two of 130 teachers left at the Paradise Unified School District. Before the fire the district had 200 teachers. District officials, fearful of having an overabundance of teachers because of declining student enrollment, offered teachers an early retirement incentive. Eighteen took the offer. Others, mostly newer teachers afraid of layoffs, left for other jobs, John said.

Five administrators, including Paradise High Principal Loren Lighthall, also left the district, as did 68 of the district’s 200 classified workers, including office clerks, custodians, yard supervisors and cafeteria workers. John said she will retire as superintendent after this school year.

“Unfortunately, they left because they lost both their school and house,” Smith said of the teachers who quit. “It’s hard. You just have to wish them the best and hope they find happiness and keep moving.”

The district has been able to avoid layoffs because the state has promised not to reduce its general fund of about $40 million through the 2020-21 school year. But because funding is based on student attendance, it could drop to as low as $15 million to $17 million in 2021-22, according to the district.

“We didn’t want to do any layoffs because we wanted to see if attrition would take care of it,” John said. “We didn’t want to hit people twice. We had so many people leave, we were right where we thought we would be. They lost homes and moved on.”

The moves forced the district to do some strategic hiring for a vice principal and six teachers who are credentialed to teach subjects that have teacher shortages, as well as a 6th-grade teacher.

But, Smith is concerned about the potential for layoffs when the district funding is cut in two years. “We know we are going to have to get down in numbers,” he said. “It’s painful to see people you have grown close to leaving when it’s no one‘s fault. The positive thing is that our budget is in place for this year and next, so we have the time to see what our enrollment looks like.”

Ed Grigorio, principal of Paradise Ridge, is confident of the district’s future. “It will happen. The community will rebuild,” he said Monday. “We will repopulate. We will have families with school-age children move up here. In the meantime, we will focus on today’s students.”