Reinventing a California school one teacher at a time

Above: Theresa Griffin, a sixth grade teacher, helps students solve real-life math problems on how to graph integers on a number line.

Richmond teachers take up the challenge

At a school that has seen many of its teachers leave every year, there’s one who for nearly two decades has been committed to staying and helping her students.

“I treat them like they’re my own,” said Theresa Griffin, a 6th-grade teacher at Stege Elementary School, whose students are sometimes the children of her former students. “I raised my kids in this community, and I’m connected to working with the children who live in this community and the parents.”

Griffin joined the faculty in 1997 to teach 4th through 6th grades and is now the school’s longest-serving teacher. She, like the school’s other teachers, is key to ending a downward spiral that saw the school ranked among the lowest-performing schools in California. Griffin has witnessed the school and the Richmond community change and she knows all too well that real change will only come with drastic action.

Editor’s note: This story is part of an occasional series on the challenges facing Stege Elementary in Richmond in the East Bay as it embarks on a plan to transform itself by the fall of 2020. Go here for other stories in this series. Please share your story about Stege Elementary with us.

Despite the wide range of challenges at the Richmond K-6 school — low academic performance, poor attendance, high suspension rates and teacher turnover — Griffin and the newer teachers are working together to turn it around. And they see a community rallying around them.

Over the years, Griffin said she’s seen several attempts to redesign or improve the school come and go.

“I don’t think it’s going to change if we don’t do something drastically different,” she said, adding that she doesn’t know exactly what that change should be.

What’s clear is that the pressure to bring real change falls mostly on the teachers.

This academic year was supposed to allow staff and the community to come up with a plan for the school to transform itself by the fall of 2020. To attract new teachers and keep others, the district is spending about $55,300 that goes directly to the teachers for 10 additional training days added to the school year. Those days give teachers more time to collaborate with one another. Every teacher is receiving a $10,000 stipend to work in the “hard-to-staff” school. The district received about $50,000 in federal funds that became available after the school was listed among the lowest-performing schools in California in 2018.

The district’s plan is to take the lessons learned from redesigning the school and apply them to other academically struggling schools.

District officials are not certain what impact these incentives and changes will have on the school. Those evaluations are expected to happen next year. 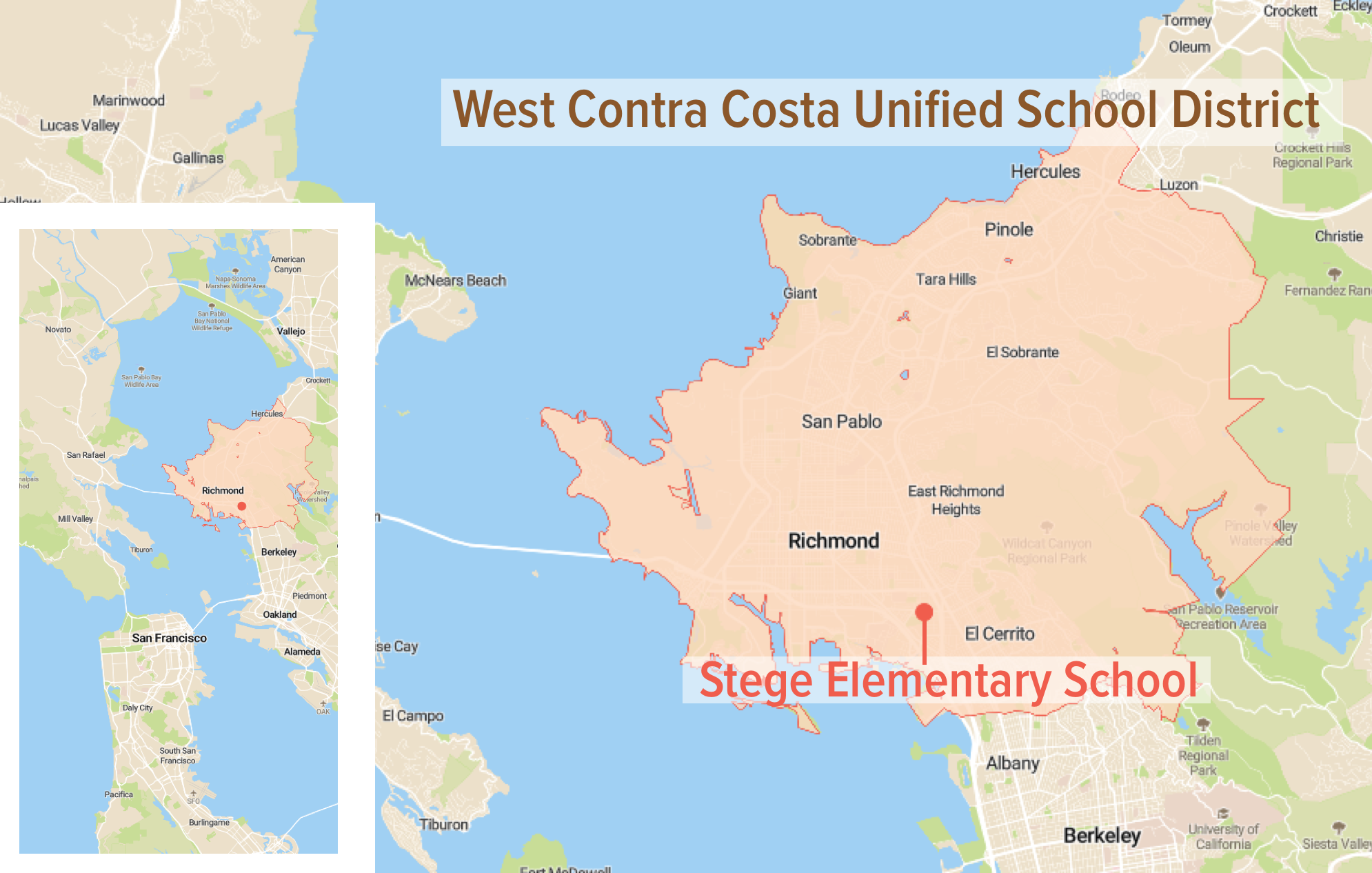 Understanding the culture of the students

Stege (pronounced Steej) is tucked between two freeways in a corner of Richmond, a diverse industrial city on the edge of San Francisco Bay and San Pablo Bay. The school operates out of a one-story building erected in 1943.

Griffin, who raised her own children in the Richmond community, said she remained at the school after all these years because of her community ties and the opportunity to work with black and Latino students from lower-income families.

“I care about their whole being and not just about their academics and think that’s part of why I have stayed,” she said. “I say from the very beginning, I teach life skills.”

Griffin said she’ll ask students about their experiences in her classroom and in others. And students have been honest about feeling a lack of support from their teachers or questioning why they’re learning something like percentages.

It’s been hard for students and the staff who have stayed with the school to see teachers frequently come and go, Griffin said.

“It takes a strong person to work here,” she said. “It takes a compassionate person to work here and you have to understand the culture of the students. You have to understand some of the things they’re going through and you have to try and reach them. Sometimes you do and sometimes you don’t. And you can’t beat yourself up about those that end up going down the wrong road because sometimes they get caught up in circumstances.”

Tanise Smith’s daughter, who is now a senior in high school, attended the school for one year as a 6th-grader. Before then, she had gone to school in Georgia, but the family moved to California. Smith was one of several parents interviewed by EdSource who praised Griffin for her teaching skills. Smith learned her daughter was academically ahead of the other students at the school and found the work unchallenging — until she worked with Griffin.

“Her experience there wasn’t a good one because she was so far ahead of the other kids in academics,” said Smith, who is also a member of the Stege Community Advisory Board. “It was a learning experience for us, but because she had Ms. Griffin, who is still there, and she’s a great teacher, she was able to help.”

Griffin gave her daughter more responsibility in supporting her classmates, which Smith said was the challenge her daughter needed to stay involved in the class and improve her own academics.

Two of the school’s newer teachers are sisters Juli and Robin Bryant, who joined the Stege Elementary faculty this year after working in the Oakland Unified School District, Juli to teach art and Robin to teach kindergarten. The sisters, third-generation educators, describe their careers as the “family business.”

Robin Bryant said she pursued job opportunities in West Contra Costa after leaving Oakland Unified. It was then that she learned about the position at Stege.

“I knew nothing about the school,” she said. “But they said they had a kindergarten opening and they’re trying to change things around.”

Juli Bryant was teaching high school-aged students but was encouraged by her sister to join Stege Elementary. She believes in the importance of art education and was eager to teach it at the school, she said.

Teachers burn out due to lack of substitute teachers

However, four months into the school year, many teachers are feeling burned out. Demetrio Gonzalez, president of the United Teachers of Richmond, which is the union representing teachers at the school, said it’s a typical feeling for teachers a week from winter break. But the problem may be worse at the Richmond school.

“The biggest complaint they have is the constant lack of a substitute teacher,” he said. Some teachers have been regularly absent from the school, which means it’s on other teachers to divvy up their missing colleagues’ students in their own classrooms, which can be a burden if a substitute teacher isn’t available.

“It’s been frustrating because we’ve had a lot of teachers out this year,” Griffin said. “It just puts more pressure on teachers who have to pick up extra students.”

The school was assigned an in-house substitute teacher at the beginning of the year, but that person has been filling in for another teacher who went on medical leave, Gonzalez said, adding that the teacher is expected to return next year.

“Substitutes in the district receive $135 a day which is an average for the area but honestly need to come up if you want to be competitive,” he said. “And in an area like Stege or Kennedy (High School), substitutes don’t go and unfortunately that has really affected them.”

In the meantime, the school will have a new teacher, that will fill-in for teachers who need time to prepare for their class, to help fill in starting the first week of January, he said. That person will help fill the need for a substitute.

“My hope is that that will really help them,” Gonzalez said.

Smith, who with family members lives in the neighborhood, said there is anxiety about just how the school’s turnaround will happen, but already she’s seen progress.

“There are teachers there who are willing, able and committed to trying innovative techniques,” Smith said, referring to her visits to the school when she’s witnessed students “completely engaged” in their technology class, for example. The teachers have worked with the community to give away donated books to students and recently took to the stage for a fun skit in the students’ winter holiday performance.

But, she acknowledged seeing a small number of students who disrupt classes and require extra attention. Smith said she would like to see a vice-principal assigned to the school to help teachers and Principal Nicole Ruiz with these students.

“When you have new teachers or younger teachers anywhere and this is their first time managing 20 to 30 little personalities with different traumas, sometimes they’re completely lost,” she said. “Ms. Ruiz needs someone there to support her with either coaching teachers or when she has to deal with disciplining students.”

This semester has been marked by frustration for many in the community over the lack of a clear plan and concerns that change is moving slowly for the school. The school began the year without all of the teachers that had been promised and no counselor that families had asked for.

However, district officials have said the actual redesign won’t begin until the 2020-21 school year and that this year has been for planning that redesign.

Also looming over any redesign plan — the nearly $40 million budget deficit the district is facing next year.

District faces its own deficit

“I’m getting a lot of questions from Stege,” Gonzalez said. The school is getting more money this year than is usual, but there are still questions around whether it will be cut as the district deals with a $38 million deficit next year, he said.

The district hasn’t decided if the additional benefits the school received this year, such as increasing teacher salaries, will persist beyond this year.

Although students at the school are making some academic progress, they remain well below state averages in math and English language arts, according to the state’s standardized Smarter Balanced tests. Chronic absenteeism also remains a problem for the school, with the number of students missing school for 10 days or more increasing by 4.6 percentage points to 39.9 percent this year, according to 2019 California School Dashboard.

“We’re pushing the district to continue its investment in Stege but also don’t hurt the other low-income schools,” Gonzalez said.

Any new ideas that emerge from the redesign may need to happen without additional funding, he said.

“We have the teachers. We’ve given them some training. But what is the next step? That’s what we have to figure out together,” he said.