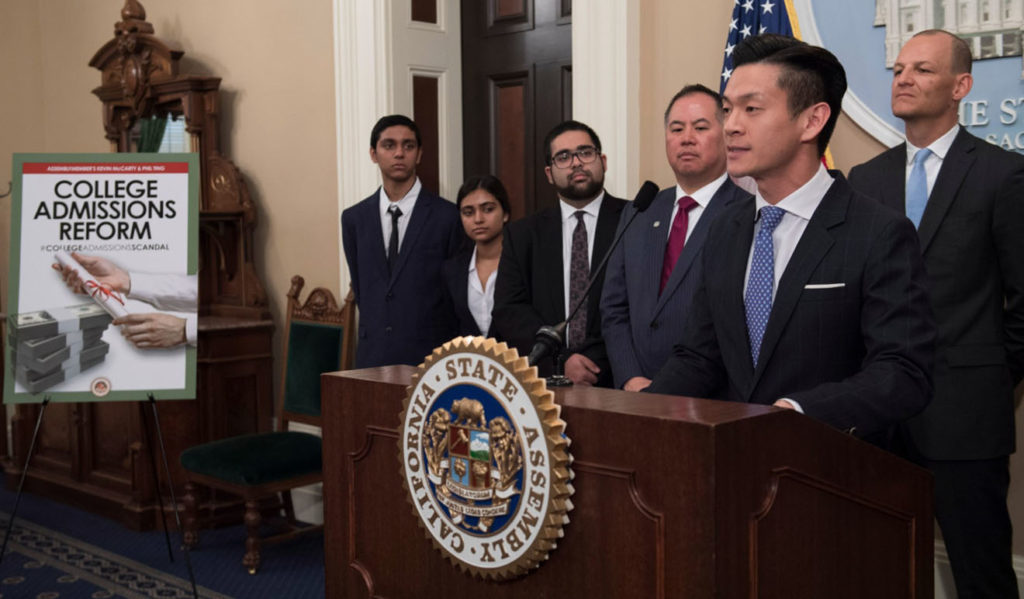 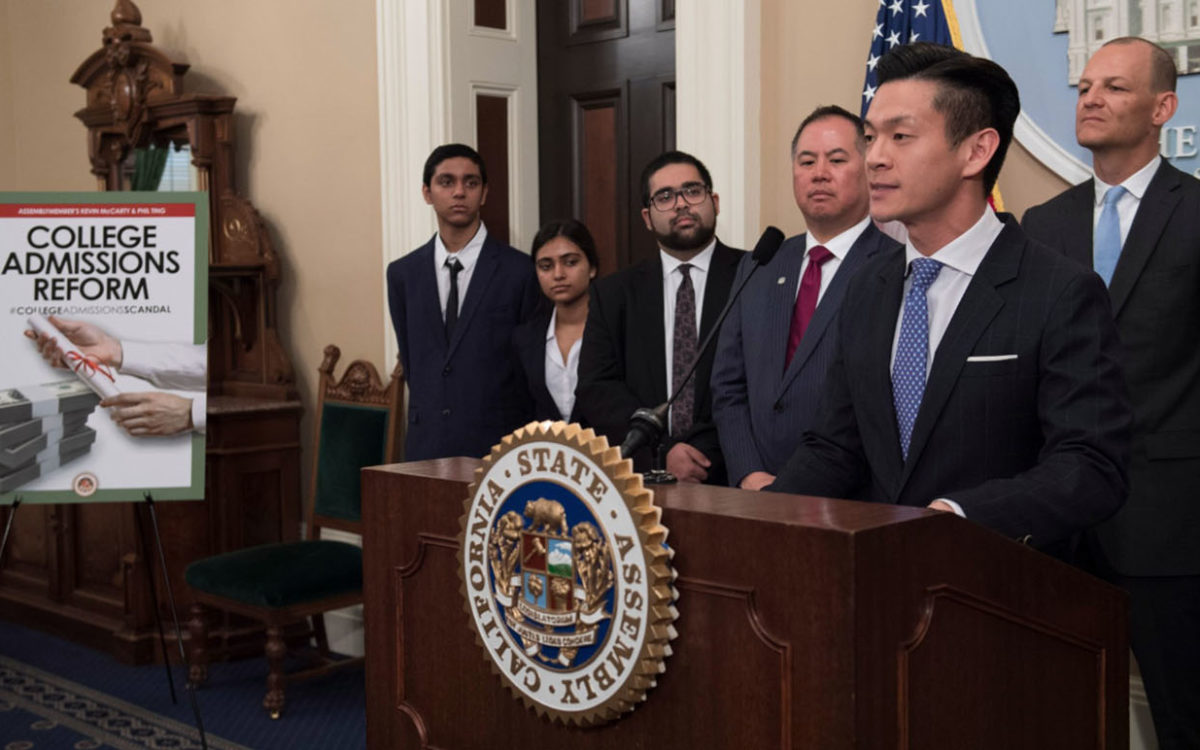 In the days following disclosure last March of the massive “Operation Varsity Blues” scandal, California lawmakers vowed to clamp down on the admissions process at state and private colleges and proposed a flurry of reforms to punish wrongdoers and regulate the admissions industry.

But by Friday, in the final hours of the legislative session and as a Boston federal judge sentenced celebrity defendant Felicity Huffman to 14 days in prison, state lawmakers had stripped some of the legislation of its teeth. One of the toughest proposals passed in a much milder form and another key reform plan appears dead for now. Huffman’s sentence also included a $30,000 fine, one year of supervised probation and 250 hours of community service.

Legislators originally had responded to public outrage over revelations that wealthy parents were buying spots for their children at highly competitive schools in California and elsewhere. But private colleges successfully lobbied against one bill while lawmakers pulled back on having the state oversee admissions consultants.

Several other bills responding to the scandal passed and have been sent to Gov. Gavin Newsom. One would require more scrutiny of special admissions cases for athletes and others at the state’s public universities. Lax oversight of such sports applications at UCLA contributed to cases of coaches being bribed and students being fraudulently admitted, prosecutors say.

The toughest and most controversial initial bill was aimed at private colleges and could have cost some schools hundreds of thousands of dollars a year in state aid to their students. But after intensive lobbying by private colleges, AB 697 emerged in a weaker version that now goes to the governor for approval or veto.

Another bill aimed at putting a clamp on crooked college admissions consultants is stalled in a Senate Committee. AB 1312, authored by Assemblyman Evan Low (D-Cupertino), sought to regulate the kind of business conducted by William “Rick” Singer, labelled the mastermind of the admissions scam, who worked out of Newport Beach offices offering wealthy parents an edge on getting their children admitted to some of California’s and the nation’s most prestigious colleges, documents show.

AB 1312 would have established a registration and oversight system for college admissions consultants. The bill proposed that college entrance consultants and firms generating annual income of at least $5,000 must register with the California Secretary of State, who would then develop regulations for the industry. It passed the Assembly in May but was stalled in the Senate Appropriations Committee, where some concerns about its potential cost were raised. Low’s staff did not return phone calls seeking comment about the bill.

Even in its softer form, AB 697’s requirement that colleges detail the numbers of legacy admissions is a “good first step” toward possible further reform, according to Nannette Miranda, a spokeswoman for its co-author Assemblyman Phil Ting (D-San Francisco). It will be important to see the data on such admissions “to see how bad the problem is before we do anything more,” Miranda said.

In the bill’s original form, colleges would have been banned from receiving state financial aid if they allowed any admissions preferences to children of alumni or donors. Instead, the final bill would require colleges only to disclose any so-called legacy admissions. The bill does not specify a use for that data but says the intent is to “bring more fairness and transparency to college admissions.”

The original bill was opposed by the Association of Independent California Colleges and Universities (AICCU) which includes 84 private, nonprofit schools. Among them are the University of Southern California and Stanford University, two schools whose former staffers were accused of taking bribes to arrange admissions. The group claimed that many low-income students would have been badly harmed by the initial bill’s intent to ban state Cal Grants scholarships at schools with legacies admissions.

Now that the bill requires disclosure only to maintain Cal Grants at those schools, the association is “neutral” on whether Newsom should sign it.

The association’s president Kristen Soares said its member colleges will work to uphold the new policy if the bill becomes law. She said she was happy that the required disclosures “can shed some light” on the admissions process and let families know that schools try to ensure fairness.

The state’s 10-campus University of California and 23-campus California State University systems say they don’t use such preferential legacy admissions. But many private schools do and say it is an important and legitimate part of their traditions if used properly.

The Legislature has until the end of Friday to pass bills in this session. On Friday afternoon, Huffman, a “Desperate Housewives” star, told the judge she was “deeply sorry” and told her daughter: “I was frightened, I was stupid and I was so wrong. I am deeply ashamed of what I have done.” Huffman has admitted to paying $15,000 to crooked college admissions consultant Singer to boost her daughter’s SAT scores.

In a three-page letter last week to the judge, Huffman tried to explain why she participated in the scheme. “In my desperation to be a good mother I talked myself into believing that all I was doing was giving my daughter a fair shot,” the letter said.

In court, U.S District Court Judge Indira Talwani told her: “Trying to be a good mother doesn’t excuse this.”

Huffman was the first defendant to be sentenced in the scandal. She is among the 15 parents who have pleaded guilty in the various cases while about 50 parents, coaches and college administrators have been indicted.

Prosecutors called for Huffman serve one month in prison and pay a $20,000 fine. Her lawyers asked for a sentence of one year of probation, 250 hours of community service and a $20,000 fine.

In some cases, Singer has admitted bribing coaches for schools to give spots on athletic teams to undeserving but wealthy students who had little or no experience in the sport and otherwise would not have been accepted to the college.

Also awaiting sentencing is Devin Sloane, a Los Angeles businessman, who pleaded guilty to paying Singer $250,000 to bribe a senior USC administrator to get his son admitted as a water polo player. Sloane concocted fake photos of his son as a player although he did not play water polo competitively.

Another bill passed by both houses and sent to the governor, AB 1383, would require at least three senior campus administrators at CSU or UC to approve so-called exception admissions. Those involve admitting students with special sports, artistic or other abilities, even if their high school grades or test scores fall short of usual standards. The bill would require that athletes admitted this way be required to be on the team for at least a year although no punishments are listed if that rule is not followed.

“With the recent college admissions scandal, we saw California schools, coaches and wealthy parents take advantage of the admission by exception rule,” Assembly member Kevin McCarty (D-Sacramento), who sponsored AB 1383, said in a statement this week. He said the plan “will strengthen transparency by implementing more checks on special admissions.”

He was among the group of legislators who held a press conference in March announcing their legislative response to the corruption charges.

UC has been implicated in the scandal with alleged bribery at UCLA. That campus’ men’s soccer coach, Jorge Salcedo, resigned in the wake of his indictment for allegedly accepting $200,000 in bribes to admit two players with fake sports resumes.

The UC system’s own audit last spring in response to the indictments found some weaknesses possibly allowing corruption in admissions systems and as a result UC is tightening up procedures, according to Han Mi Yoon-Wu, the UC system’s interim associate vice president and director of undergraduate admissions. AB 1383’s requirement of extra eyes on exception admissions “seems to be in line with our own audit recommendations and actions,” she said.

Another McCarty measure, ACR 64, a resolution now passed by both houses, asks UC and requires CSU to evaluate whether standardized tests such as the SAT and ACT still should be required in admissions. Critics long have contended such tests favor the wealthy and recent allegations of exam cheating in the scandal bolstered such complaints.

The university systems are looking into those issues but some educators say that possible elimination of those tests would increase pressure for grade inflation at high schools and possible corruption at that level. The measure does not need Newsom’s consent.

A bill authored by Assembly member Sharon Quirk-Silva (D-Fullerton) aims directly at the pocketbooks of people convicted in the admissions schemes. Approved by both houses, AB 136 would prohibit people convicted in the scandal from writing off as charity donations or business costs from their state income taxes any of the payments to Singer’s shell charity or campus sports funds that actually were bribes.

“This bill draws attention to the importance of taking the necessary steps to ensure that that the appropriate safeguards are in place and encourages a culture of fairness and equity on college campuses across the state,” according to a legislative analysis.