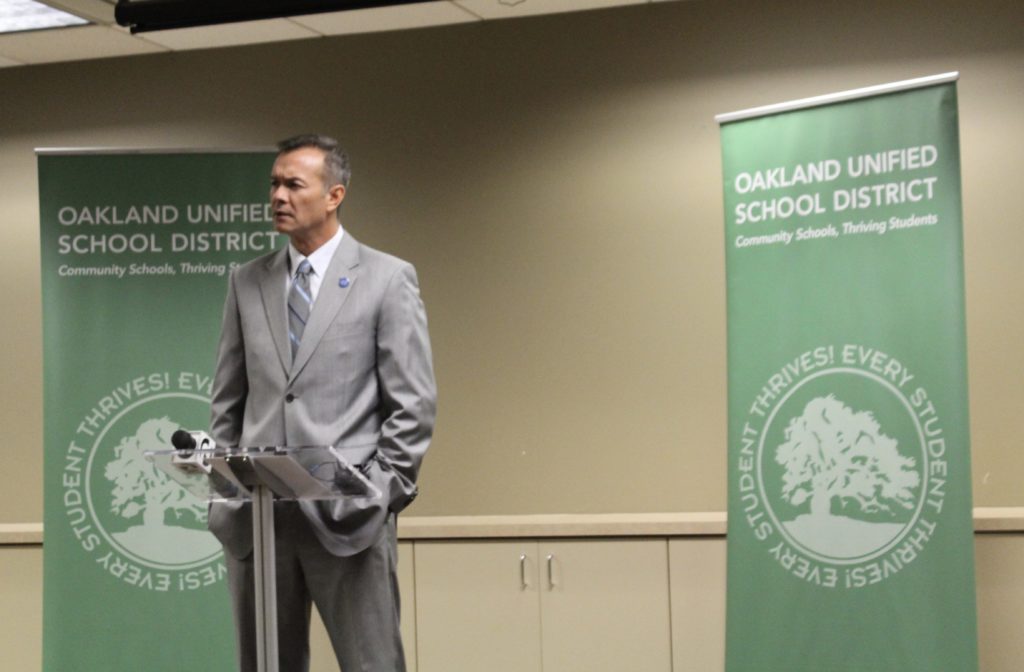 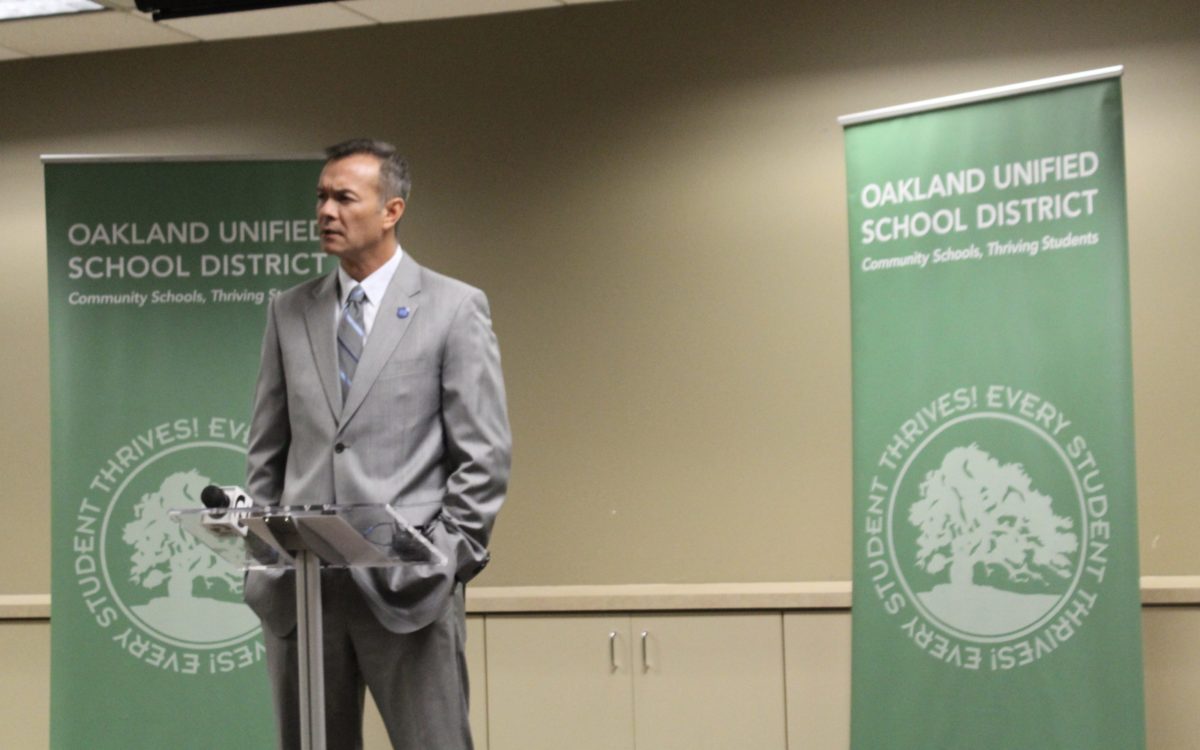 Theresa Harrington / EdSource
John Sasaki, spokesman for Oakland Unified, responds to questions during a press conference about allegations of grade changing at Castlemont High on Sept. 5, 2019.

Theresa Harrington / EdSource
John Sasaki, spokesman for Oakland Unified, responds to questions during a press conference about allegations of grade changing at Castlemont High on Sept. 5, 2019.

The Oakland Unified School District Thursday announced plans to hire an investigator to look into allegations by two former teachers that grades were changed for courses, including those taught online, to allow students to graduate.

The allegations focus on Castlemont High in East Oakland and its use of a district online credit recovery program that allows students to make up credits for failed courses.

Two teachers filed formal complaints with the district in June and July alleging that a teacher, two counselors and the school’s former principal were involved in falsifying district records, John Sasaki, district spokesman told EdSource. Each of the people named denied any wrongdoing, he said.

The teachers, who were not identified, said the grade changes were made with the knowledge of an administrator and other staff members, Sasaki said. He said the complaints alleged the grades of nine students were changed, but the district investigated each one and found no evidence that they occurred.

“Corrections to our system need to be made,” Sasaki said referring to the need for better staff training in how to use the online credit recovery system.  “But, as for the specific allegations, so far, we have found no evidence to support them.”

The grade-fixing allegations were first reported Wednesday by NBC Bay Area based on information provided by three teachers. The allegations involved both fixing of transcript grades and giving students credit for online courses that were not completed.

One former district teacher who filed a complaint told NBC the grades of at least eight students were changed so they could graduate in June. “I noticed that a lot of students were receiving credit for classes that they were never enrolled in or were receiving (passing) grades for online learning that they hadn’t actually completed,” she said. A second teacher said that another educator emailed answers to students before the tests. Both teachers said they discovered that records had been changed to show passing grades for students to whom they had given failing grades.

Sasaki said none of the allegations involve wrongdoing by the district’s credit recovery program provider, Apex Learning.  The Seattle, Washington-based company has been in business over 20 years and  provides online credit recovery courses to some 2,000 districts nationwide.

Cheryl Vedoe, CEO of Apex said the company provided Oakland Unified requested information on access and use of the system. She said the online credit recovery program is set up to allow teachers to override a score and while that is captured by the system, the district will have to determine why a change was made. “There may be very legitimate reasons why grades were changed.”

In an interview with EdSource, Vedoe said the Oakland allegations can cast a shadow on a program that gives students an opportunity to retake courses and succeed.  “I do think that’s unfortunate.  These programs, when implemented well, provide a real service to schools and districts and to the students that they serve.”

Both were significantly lower than statewide graduation rates, which grew from 86.7 percent to 87.3 percent over those two years. Graduation rates for previous years cannot be compared because the state changed the way it calculated the data.

Last year, about 835 students attended Castlemont, where most students were low-income and nearly half were English learners.