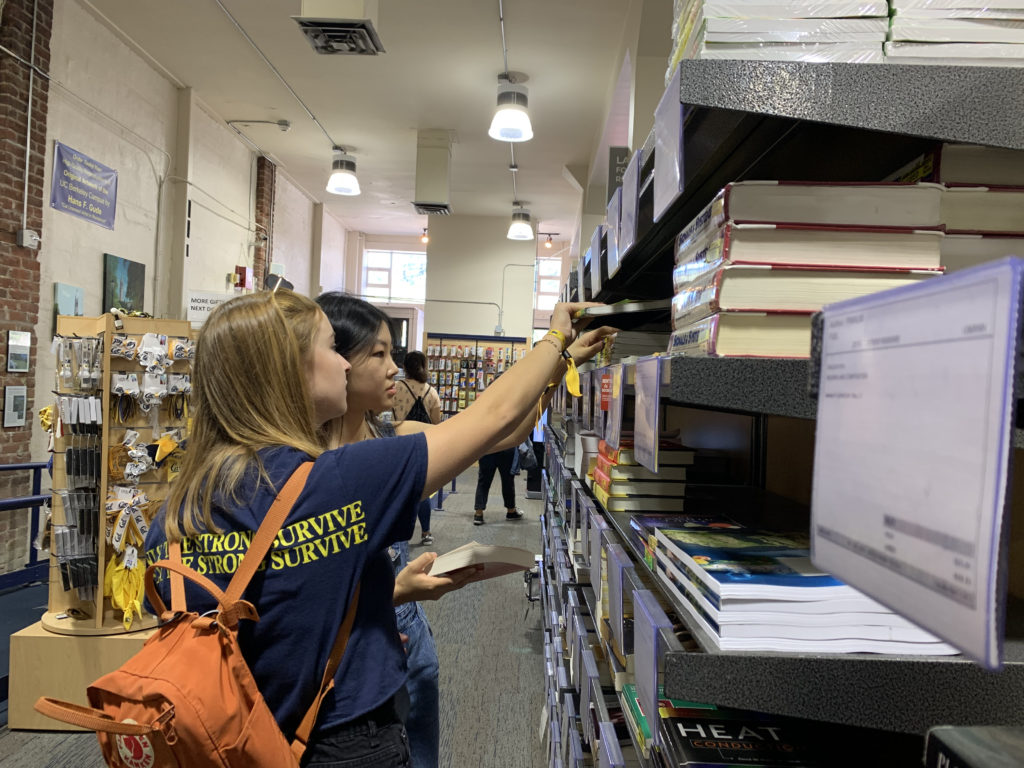 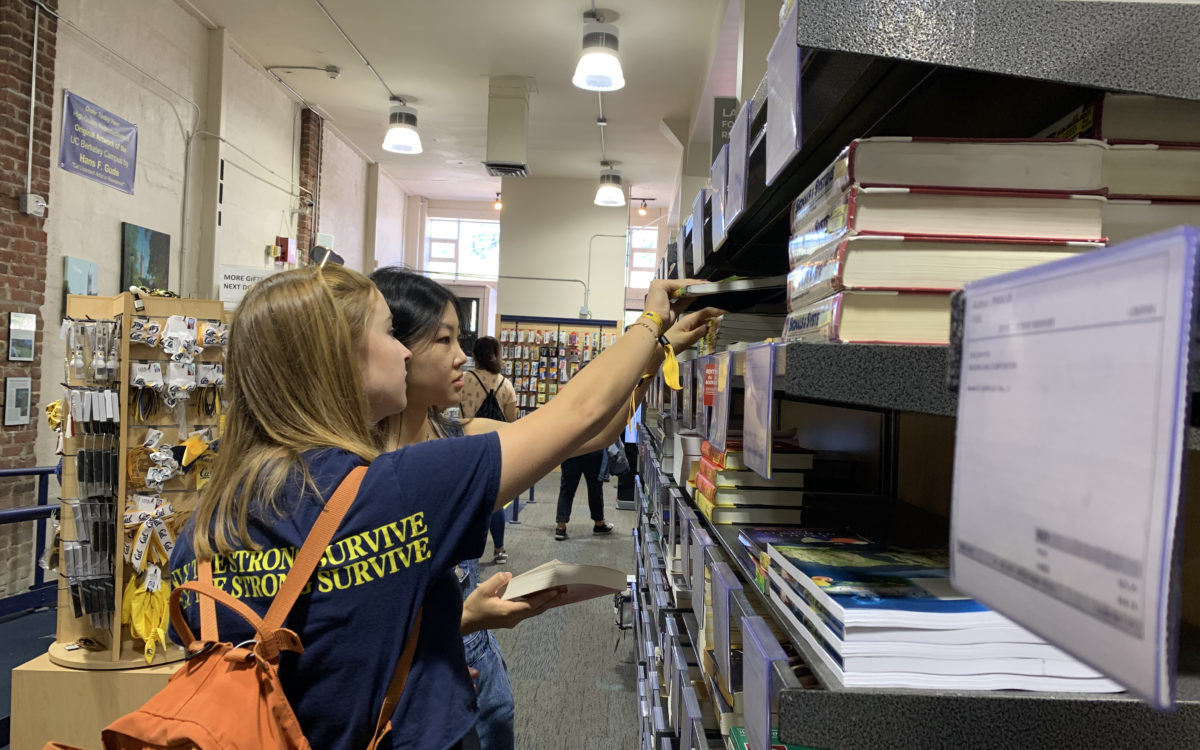 As they start a new school year, college students usually come to campus knowing their tuition and room and board costs. The big unknown is the often-hefty cost of textbooks.

Many students don’t know what textbooks they’ll need and how much the books will cost until they’ve enrolled in courses and checked their professors’ syllabi.

But universities across California, especially in the 23-campus California State University system, have become more transparent about textbooks and more proactive in assigning free, digital or low-cost books to students. And some institutions, such as the University of California at Davis, are working to revolutionize the textbook market and make it more affordable for all students.

“Some professors don’t require textbooks because they want you to save money,” said Mayra Solorzano, a senior studying criminal justice at Cal State East Bay. Solorzano said she has become thriftier about textbooks with each year at the college.

Solorzano said she was able to keep her costs under $150 because the campus bookstore sold out of one book and forced her to seek a solution on social media.

“I went on Twitter and found it for less on Slugbooks,” she said, referring to a website that sells and rents books to college students.

Students are more aware of textbook prices, especially as affordability plays a more significant role in their decision-making over which institutions to attend or even what career to pursue.

Whenever they have the option, students are opting not to spend money on textbooks. Student spending on course materials has declined by 31 percent over the past 10 years, according to the National Association of College Stores, or NACS.

The average college student spent $415 in 2018 on their course materials — $69 less than the previous year, according to the college stores association.

While most students choose to buy their books, more than half of students responding this spring to an association survey, said they are opting for less expensive options like renting or borrowing books.

“None of my classes this quarter have a physical textbook,” said Reva Agashe, an incoming bioengineering freshman at UC Berkeley. “The classes just require online materials, which is nice. Eventually, I’ll be in courses with physical textbooks and those cost more.”

Agashe said when the time comes for her to buy textbooks, she won’t get anything new but instead will opt for less costly used books.

Some of the declines in student textbook spending could be attributed to programs such as CSU’s Affordable Learning Solutions’ initiative.

Nearly 8,500 CSU course sections, of which the system has tens of thousands, were part of the initiative last year and saved students more than $50 million, said Leslie Kennedy, director of digital content and academic technology services for CSU.

“(The initiative) provides equitable access to all course materials, which impacts how students finish a program and sometimes impacts how many courses they take,” Kennedy said.

Last year, the state Legislature also moved to lower the costs of textbooks by requiring all California Community Colleges and the California State universities to indicate on college schedules what courses offer “zero-cost” textbooks or digital resources. The Legislature requested the ten campuses in the University of California system to do the same.

Publishers also are working with CSU professors and bookstores to participate in the system’s Immediate Access Program, which gives free course materials to students by the first day of class, Kennedy said.

Often students don’t have the money to buy a textbook at the start of term, so the Immediate Access Program gives them time to pay for the book until the course drop-date which is typically within the first couple of weeks of a semester, Kennedy said.

And digital textbooks in the program are discounted up to 80 percent, she said.

“More faculty are realizing we can teach with a zero-cost textbook,” she said, adding that 20 CSU campuses have adopted Faculty and Academic Senate resolutions saying they’ll support zero or low-cost textbook efforts on their campuses.

Nationally, only 36 percent of faculty selected printed course materials for students last year, which was a decrease from 50 percent the previous year, the college stores association survey found. On average, the book cost was $85.85.

The survey also found three-quarters of faculty considers the cost of textbooks to students when selecting the materials they assign.

Faculty at Cal State Channel Islands in Ventura County surveyed more than 700 undergraduate students last year and learned that 80 percent did not have a textbook on the first day of classes because of costs. Eighty-nine percent of students reported increased levels of stress over how to pay for their textbooks. A survey at San Francisco State University found similar results with 79 percent of students reporting that the cost of course materials caused them stress. The survey, which was conducted by SF State faculty and staff, also found that one in three students chose a class based on the price of course materials.

Ellen Harper and Chenxi Deng, both biology exchange students at UC Berkeley from the University of Edinburgh in Scotland, said they were unaware that students pay extra for textbooks in the U.S.

“Our students are not just college students, but they’re living their lives, working one or two jobs and raising families,” said Jill Leafstedt, associate vice provost for innovation and faculty development at CSU-Channel Islands. “Tuition is somewhat predictable, but textbooks are one of those costs that just show up and change semester to semester.”

The campus became one of the first in the country to offer majors that students could complete without having to buy a textbook in 2018. The “Z-majors,” as they are called because they have zero textbook costs, are offered in early childhood studies, communications and health sciences majors. Leafstedt said the campus will soon offer Z-majors in business. Instead of actual textbooks, students will use no-cost digital books, government reports or library materials.

The university estimates the majors have saved nearly $1.3 million for students since launching more than a year ago.

Faculty members at the university have been receptive to moving away from traditional textbooks, Leafstedt said.

“There are some pockets where faculty have a textbook and don’t have the time to look elsewhere or they’ve written the textbook or their friend has,” Leafstedt said. “For the most part there has been very little resistance. We never ask faculty to put quality aside.”

Instructors at UC Davis are optimistic that a new way of purchasing textbooks will further help to drive down costs for students.

Next year, the university will launch a pilot textbook subscription service.

The opt-in service would charge students a flat fee of about $200 each term for their course materials regardless of major or requirements. Lorgan said such a model could revolutionize the textbook industry in the way that the music industry changed how fans access and pay for music.

For example, instead of ordering 100 copies of a first-edition textbook for $300 each, the bookstores would purchase the same number of digital copies at $30 apiece every term. The cost to students would be the same regardless of how many books the student uses.

The digital content is cheaper for students because, like the music industry, students wouldn’t own the materials indefinitely but would only have access for the term or the year, Lorgan said.

University officials are optimistic publishers will sign up to participate in the subscription plan, which would also eliminate the need for the used book market.

Lorgan said the subscription service is optional for publishers and faculty can still require students use books that aren’t part of the service.

UC sees the service as a win for everyone: publishers would make more money over time, students would pay less and faculty can continue to choose the textbooks they prefer without fear of sacrificing quality in favor of price, Lorgan said. The pilot service will start with all undergraduates next year.

“We think this will make a real difference,” Lorgan said. “Some of the other national models dealing with textbook affordability promote (free content) but that is still optional. We’re trying to take another look at the model and totally reinvent it, so we get rid of the things driving the cost up.”