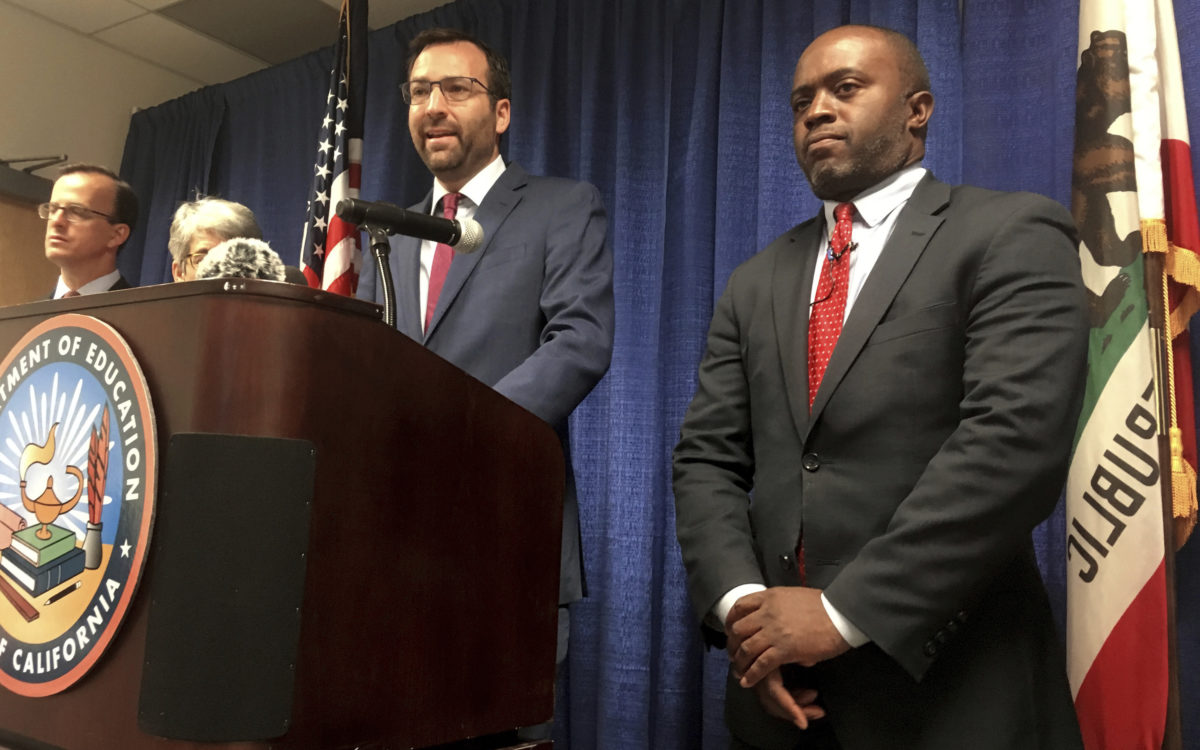 The question of how best to represent all Californians when teaching ethnic studies is back on the table.

Monday State Superintendent of Public Instruction Tony Thurmond announced a plan to revise the proposed ethnic studies curriculum and to bring it back to a vote of the State Board of Education in 2020.

That would give the California Department of Education time to consult with ethnic studies experts on what might go into the draft curriculum, meet with district officials who have successfully implemented ethnic studies curriculums and get feedback from ethnic studies teachers and others, according to a press release from the department.

Thurmond has asked Assemblywoman Shirley Weber, D-San Diego, a former teacher of Africana Studies who has helped establish ethnic studies curriculums in some California school districts, to be part of an ethnic studies panel of experts. The curriculum would be used as guidance and would not be mandatory.

Legislation that would require students to take ethnic studies courses as a requirement for high school graduation was delayed until next year after widespread criticism of the proposed curriculum, which was written by a 20-member committee of California high school ethnic studies teachers and college experts. Critics said the 350-page document was politically biased and omitted the American experiences of Jews, Koreans and other ethnic and religious groups.

Last month Thurmond and State Board of Education President Linda Darling-Hammond agreed with the criticism and said there would be significant changes to the curriculum, which would provide guidance to high schools and potentially middle schools.

“Ethnic studies can be an important tool to improve school climate and increase our understanding of one another,” Darling-Hammond wrote in a statement last month that was cosigned by board Vice President Ilene Straus and board member Feliza Ortiz-Licon. “A model curriculum should be accurate, free of bias, appropriate for all learners in our diverse state and align with Governor Newsom’s vision of a California for all. The current draft model curriculum falls short and needs to be substantially redesigned.”

Save CA Ethnic Studies, a coalition of educators, civil rights organizations and students, are defending the draft curriculum, which focuses on the history and struggles of communities of color in the U.S., although they are open to some revisions.

The group, which includes members of the Ethnic Studies Model Curriculum Advisory Committee appointed by State Board of Education, says changing the curriculum too much would dilute it and convert it from ethnic studies to a non-equivalent field like multicultural studies or diversity studies. They are also asking that the advisory committee continue to be involved in the process as the draft curriculum evolves.

“We look forward to working closely with the CDE on the project from here until its eventual ratification,” said R. Tolteka Cuauhtin, spokesman for Save CA Ethnic Studies in a statement. “In a sense, this SSPI statement is a win for our Save CA Ethnic Studies movement and a testament to the momentum we’ve built over the past few weeks, though there are still questions we have and clarifications needed. We know the journey is still in its early stages — which is unfortunate for our students who have waited long enough already. The 50+ year struggle for Ethnic Studies lives on. Due to these current circumstances, we are emerging more united and stronger than ever now and that is a beautiful thing, for past, present and future generations.”

Save CA Ethnic Studies, which formed a month ago, has started an online petition which has garnered over 6,000 signatures.

“There is a very strong rationale for a strong focus on communities of color that have been excluded quite often from the historical accounts that we have experienced and for whom the history of oppression continues today, whether that means all other groups will be excluded is a decision IQC (Instructional Quality Commission) needs to make,” Darling-Hammond said Tuesday.

The Instructional Quality Commission advises the state board on curriculum issues.

The broad themes of ethnic studies also can be adapted in local communities to acknowledge other groups of students, Darling-Hammond added.

Last week the California Legislature approved Assembly Bill 114, which extended the deadline to complete the ethnic studies curriculum draft until 2021. The bill is on the governor’s desk awaiting his approval.

Under the current timetable set by the Legislature, the Instructional Quality Commission is scheduled to revise the draft curriculum on Thursday and Friday. In November it is scheduled to send proposed changes to the board, which must adopt a model curriculum by March 31 unless the timeline is extended.

The California Department of Education is recommending that the Instructional Quality Commission not take any action on the draft curriculum and instead take more time to revise it, sending it back to the state board for action in 2020.

The Instructional Quality Commission will look at the 21,000 comments the California Department of Education received on the draft curriculum and decide what to do next, Darling-Hammond said. “Typically they will preserve things that can be preserved and change things that need to be changed,” she said.

Darling-Hammond said ethnic studies courses have positive outcomes for students, including increasing the likelihood they will stay in school, have better grades and acquire more credits. Schools often seem to teach things that are theoretical or remote to students and ethnic studies courses offer something that feels relevant to them, she said.

“It is an extremely important move forward,” Darling-Hammond said. “We will be the first state to develop a model curriculum. It has many questions and challenges to it, so we obviously want to get it right. I’m confident we will get it right.”

This story was updated to include comments from Save CA Ethnic Studies and Linda Darling-Hammond, president of the State Board of Education.