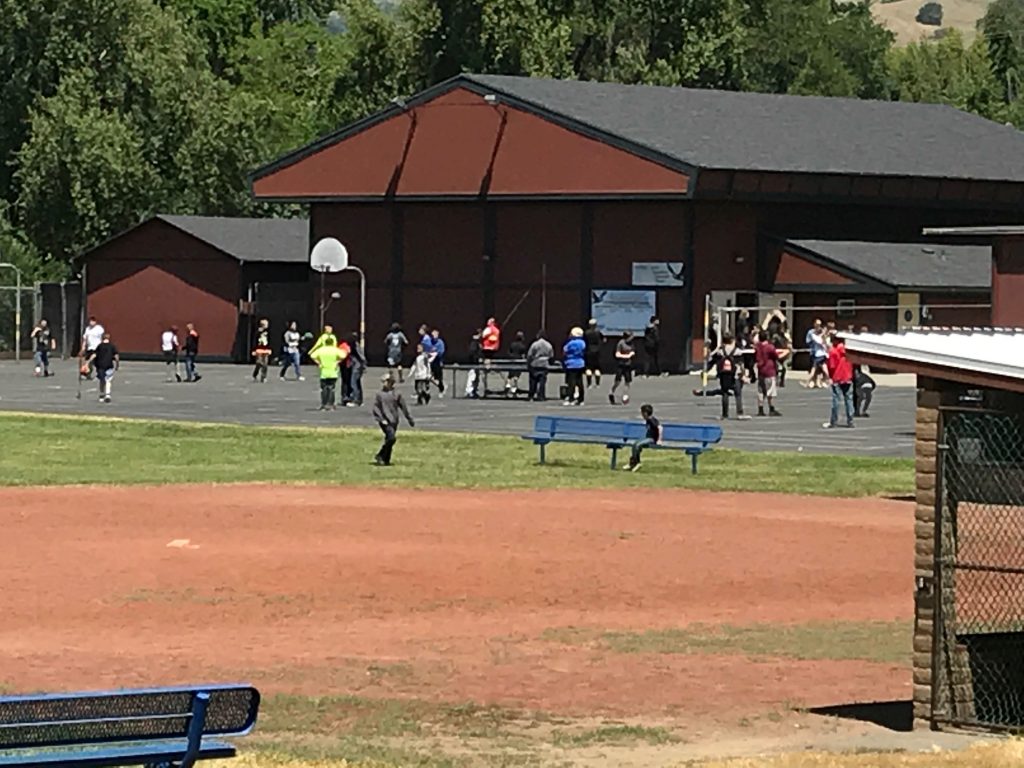 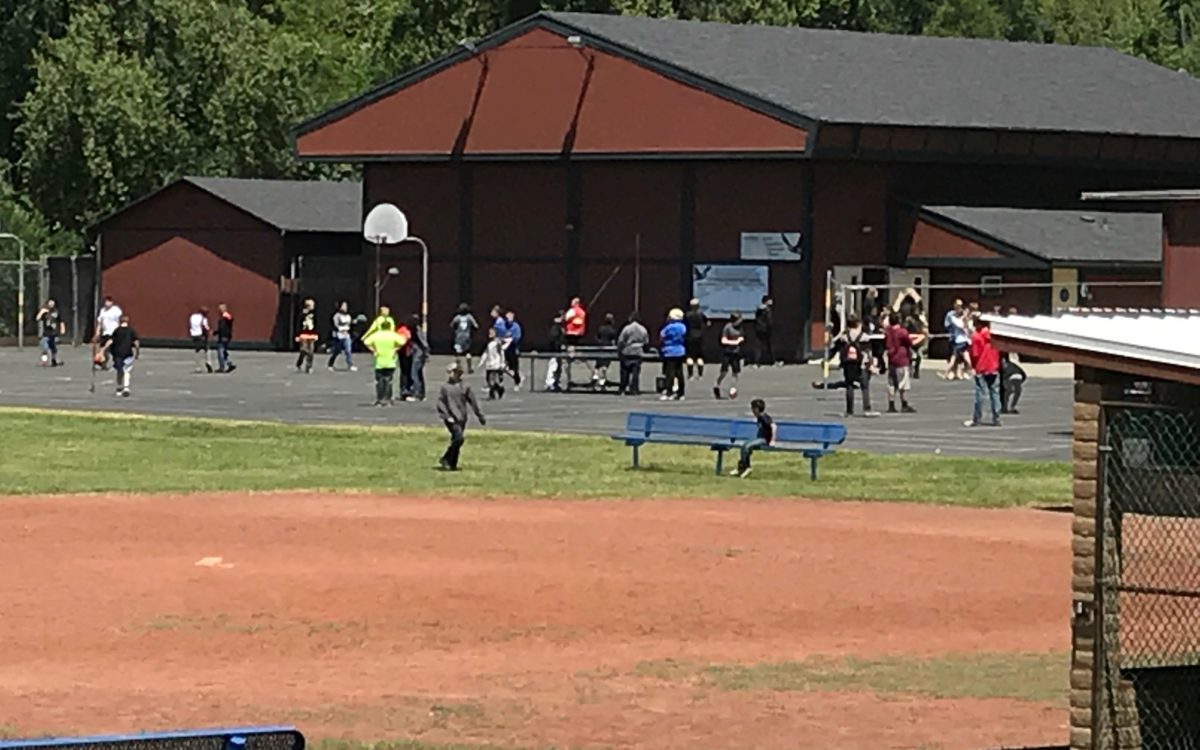 Carolyn Jones/EdSource
At Lucerne Elementary in Lake County, about half the school's students are transient.

Carolyn Jones/EdSource
At Lucerne Elementary in Lake County, about half the school's students are transient.

Crystal Willoughby, her five kids and two grandchildren have bounced around the hamlets and hillsides of Lake County for four years, always close to — but never quite — landing a permanent home. They’ve lived in motels, campgrounds, a minivan, shelters, trailer parks and, on some nights, the bathroom at a city park.

“It hasn’t been easy, but I try to make the best of it. When we’re sleeping outside, I say we’re on a camping trip and we roast marshmallows and stuff like that. I try to make it fun,” said Willoughby, who became homeless after a wildfire in 2014. “I try to help my kids with homework and projects, but it’s been hard on them. They’ve changed schools a lot and sometimes they’ve been bullied.”

Willoughby’s children and grandchildren, who range in age from 9 months to 20 years, are among a growing cohort in California: Rural homeless youth. While the number of homeless young people jumped 20 percent statewide from 2014 to 2016, the number of homeless young people in many rural counties areas rose even more significantly — in some cases more than doubling, according to information collected by the California Department of Education and analyzed by EdSource.

In Calaveras County, for example, in the Sierra foothills, the number of homeless public school students jumped from 4.7 percent of the overall student enrollment to nearly 20 percent in just two years — largely due to wildfires that left hundreds homeless. In all, 1,124 children were living in cars, motels, shelters, outdoors or doubled up with other families.

Several factors are contributing to the high numbers of rural youth homelessness. In some cases, the number of homeless students hasn’t changed but schools are getting better at counting them, thanks to guidance from the state. In other cases, wildfires and floods have displaced families from their homes and they’ve been unable to find new housing.

But the overriding cause is the same conundrum that’s bedeviled urban communities: the soaring cost of housing. In Lake County, for example, it’s hard to find a two-bedroom apartment for under $1,200 and even motel rooms can rent for more than $1,000 a month. Rents have increased as demand has grown. In 2008, by comparison, the fair-market rent for a two-bedroom apartment in Lake County was $821, according to the U.S. Department of Housing and Urban Development.

Those priced out of cities are moving further and further into rural areas in search of an affordable place to live, driving up rents and home prices. Willoughby, for example, initially wanted to live in the East Bay Area so she could be close to Children’s Hospital Oakland for her disabled son. But high rents drove her to the rugged hills north of the Napa Valley, to sparsely populated Lake County, where the median income is $36,000 annually — less than half what it is in Alameda County.

“In rural communities, the economic recovery is not really here yet,” he said. “There’s not a lot of employers. Young people end up working service jobs and many of them are one paycheck away from homelessness.”

The spate of destructive wildfires and floods in recent years hasn’t helped. Almost 500 homes were destroyed in Calaveras and Amador counties in the 2015 Butte fire. Siskiyou County lost 150 homes in the 2014 Boles fire north of Mt. Shasta. The Tubbs fire in Sonoma and Napa counties in 2017 destroyed 4,655 homes.

That’s how Willoughby lost her home. She had been renting a room in a motel with her children, but the motel owner asked them to leave so he could make way for fire victims. Suddenly, she was facing a housing market with hundreds fewer units available and hundreds more people looking for a place to live.

Calaveras Unified superintendent Mark Campbell said that after the Butte fire his district has seen increases in homeless youth, students qualifying for free and reduced-price lunch and the number of students living with grandparents. At the same time, attendance has declined, as students are absent more often or stop attending school altogether.

“There’s been an obvious academic impact,” he said, noting that students struggling with unstable housing are often tired, frustrated, hungry and “emotionally raw.” To help these students, his district has beefed up counseling services and works with county agencies and local nonprofits to provide food, clothing and other services.

“Is it hard? Absolutely,” he said. “It helps that we’re a small, rural district because we have a greater level of connectivity, awareness, trust. But on the flip side, we don’t have the adequate resources needed. We’re trying to spread a finite amount of resources among more and more students who need them.”

Lake County was scorched three years in a row by wildfires and floods, losing more than 1,500 homes from 2014 to 2016. Some of those families moved away, some found new lodging, but hundreds of others, like Willoughby and her children, were left to improvise.

This has been a challenge for Lake County schools. At Lucerne Elementary, for example, about half the school’s 260 students are transient, meaning they’re only at the school for a few weeks or months before moving away because their families don’t have a permanent place to live, said principal Mike Brown. Some are the children of migrant farmworkers, but most are simply poor — the parents might be working, but can’t afford a place to live.

For teachers and staff, that’s meant addressing children’s emotional and mental health problems while trying to get them on track academically. The school has a full-time counselor and a health worker, gives out free groceries to families on Fridays, offers rides for children whose families don’t have cars and provides clothes and school supplies when needed. New students are greeted by a “welcome wagon” to help them feel comfortable.

“I try to know every kid’s name and say hi every day, remember who plays soccer, who likes motorcycles, who wasn’t feeling well yesterday,” said Brown, who’s worked at Lucerne Elementary for 28 years. “You try to gain their trust and build respect, help them turn things around. But then they’ll move and you just hope that wherever they go, someone else will be there for them.”

Willoughby said most of the teachers and staff at her children’s schools have been helpful and understanding, but not all of them. Sometimes her children were unduly punished for missing school or homework assignments, even though the lapses weren’t the child’s fault. And even though her children are usually well-groomed and clean, sometimes they were bullied, Willoughby said.

“My kids switched schools a lot and I wish some of the schools could be more helpful with that, try to understand where we’re coming from, show more compassion,” she said. “It hasn’t been easy.”

Ana Santana, the Healthy Start program director for the Lake County Office of Education, works with schools to ensure homeless students receive the benefits they’re entitled to under the federal McKinney-Vento Act, such as transportation to school and the right to remain at a school even if the family moves out of the district.

She’s busy these days, as the number of homeless youth has jumped to almost 1,000, or 10 percent of the overall school enrollment — a number that’s almost certainly a low estimate, she said, noting that many parents are reluctant to tell authorities they’re homeless out of fear government officials might take their children away.

Santana scours the county looking for homeless families, finding them at motels and campgrounds and living among the pear and walnut orchards that skirt the southwestern side of Clear Lake.

“Some families do a fantastic job covering up their homelessness,” she said. “Especially immigrant families are scared that if people find out they’re homeless they’ll get deported or lose their kids. Our numbers are high, but we know we’re still missing a lot of people.”

Nicole Neils, a Lake County mother of two, was homeless for two years after her husband went to prison, leaving her and her children without a place to live. For a few months she slept on friends’ couches, but when their hospitality ran out she ended up camping in the hills. Her children, who were in elementary school, moved in with their grandparents, but the instability and separation from their parents was hard on them, Neils said. Her daughter fell behind academically and had to repeat a grade and her son started having behavior problems at school.

Neils was unable to hold a job because she had no car and no way to shower or do laundry. A friend eventually let Neils camp in her backyard and use the kitchen and bathroom, which allowed Neils to finally land work, as an Americorps school health worker for $800 a month.

Pooling their income, Neils and her sister, who also has two children, were able to rent a three-bedroom apartment where the two families now live. Neils’ children live with her again and she is expecting a baby in July.

“When you’re homeless, everything in life is so much harder,” she said. “It was really hard on my kids. At first, I tried to hide it, for their sake. I didn’t want people at the school to be judgmental. It was hard because I couldn’t be the mom I wanted to be. … But now that we have a place to live my kids are flourishing. My daughter has perfect attendance and my son is excelling in every subject. Things are just so much easier.”

Neils found the schools in Lake County to be very supportive during the family’s period of homelessness. Teachers were compassionate and tried to make her children feel comfortable and welcome.

“They wanted the kids to be OK and taken care of,” she said. “They weren’t judgmental. After all, I think they see this a lot.”