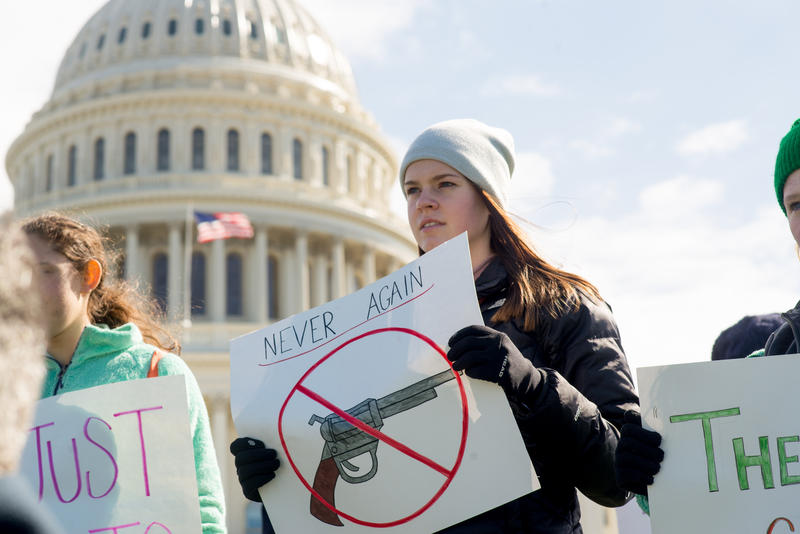 Fifty years ago this week, Latino students in Los Angeles shocked their teachers, their principals — and the world — by organizing massive school walkouts to protest their unequal education in the Los Angeles Unified School District.

School authorities were caught unawares. They stood by dumbfounded as high school kids — fed up with the poor conditions of their schools, the indifference of their teachers and the subjugation of their culture — streamed out of classrooms and into the streets of East L.A., their numbers reaching as high as 22,000.

The weeks of walkouts, called “blowouts” by their organizers, introduced California’s Chicano movement to the wider world and ushered in an era of school reform that is ongoing today.

It is in this spirit that students across the nation will be walking out of class for 17 minutes on March 14 to both honor the victims of February’s school massacre in Florida and urge lawmakers to pass stricter gun control laws. It remains to be seen whether 2018’s National School Walkout will have the impact or long-lasting legacy of the 1968 walkouts.

But what is clear is authorities will not be caught unawares. School administrators throughout California have for the past couple of weeks been holding staff meetings, drafting communiques to parents and connecting with police in preparation for the walkouts.

However, while just about every jurisdiction is making preparations, the character of the response varies depending on the district, according to EdSource interviews with superintendents and other district officials.

Many have decided on a largely hands-off approach focused on safety — informing students of their First Amendment rights, but reminding them that any time spent out of class during the walkout will be considered an unexcused absence and all of the rules and consequences still apply. Others are appealing to students to stay in class and asking them to protest during lunch and other scheduled breaks in class.

Then there are several districts that are embracing the protest as a teachable moment — encouraging students to hold on-campus rallies and flex their civic muscles.

The National School Walkout was announced in February, the week after Nikolas Cruz walked into Marjory Stoneman Douglas High School in Parkland, Florida and opened fire with an AR-15-style assault rifle, killing 17 people and injuring more than a dozen others. Following the attack, students at the school began a campaign for stronger gun control laws that has surpassed anything done by students in schools victimized by previous mass shootings.

The walkout is scheduled to take place at 10 a.m. in all time zones and last for 17 minutes — one minute for each person killed in the Parkland massacre. It is the brainchild of EMPOWER, the Women’s March youth group. The Women’s March debuted in 2017 after President Donald Trump’s inauguration and was held again this January. A related event, called the March for Our Lives, is planned for Saturday, March 24.

The price of civil disobedience

The ACLU posted a statement in recent weeks that laid out the rights of students and the institutions involved in the walkouts.

“Since the law in virtually all jurisdictions requires students to go to school, schools can typically discipline students for missing class, even if they’re doing so to participate in a protest or otherwise express themselves,” The ACLU wrote on its website. “But what the school can’t do is discipline students more harshly because they are walking out to express a political view or because the school administrators don’t support the views behind the protest.”

Districts nationwide are making preparations, with some going a lot further than others. Curtis Rhodes, superintendent of the Needville Independent School District in Texas, has threatened any student in his district who participates in the walkout with a three-day suspension.

No one in California appears to be taking things to that level.

“We have to maintain safety and be neutral with regard to positioning and politics,” said Dr. Todd Oto, superintendent of Visalia Unified in Tulare County. “We are getting ready for the possibility that students might assemble, and focusing on making it safe. We are making them aware of their rights, but also letting them know that with the rights come responsibilities.”

Responses like Oto’s were common and tended to be more prevalent among districts in places that lean conservative, including Kern and Riverside counties. Most districts are also making it clear that teachers and administrators are not permitted to take part in the protest or advocate a particular position to students.

Late last month the Fresno Bee reported that Fresno Unified Superintendent Bob Nelson is urging students to “identify alternatives” to the walkout, like reaching out to elected officials regarding gun control, discussing it in class or using their school’s free speech area between classes.

Meanwhile, school officials in cities like San Jose, Oakland and San Diego are taking a more welcoming approach toward the protests and letting students know they won’t be punished as long as they stay on campus. These districts, to varying degrees, are also allowing teachers and staff to participate.

“In our district, we talk about wanting to empower our students and encouraging them to be civic leaders,” said San Diego Unified spokeswoman Maureen Magee. “We see next week as an opportunity to make good on this.”

Students at Oakland Unified’s Edna Brewer Middle School will, as part of their lesson on March 12, create anti-violence posters. Then on the 14th, they will be put the posters on the school’s perimeter fence facing the street.

“This will be a great way for [students] to express themselves and inform their peers about what’s going on,” said Oakland Unified spokesman John Sasaki of the efforts planned at Edna Brewer and other campuses throughout the district.

The approach of officials at San Jose Unified is similar to those in Oakland and San Diego, but they’re making it a point to ask teachers and administrators to remain neutral.

“Teachers who are at a campus rally will be there just to monitor, not encourage students one way or another,” said San Jose Unified spokesman Peter Allen. “Teachers will also stay in classrooms with students who choose not to participate and listen to their opinions.”

Officials at L.A. Unified took flack last week for hosting celebrations of the 1968 walkouts, while at the same time sending out a statement from interim Superintendent Vivian Eckchian saying students should remain on their campuses.

“At what point was LAUSD given the right to tell kids how to use their civil rights?” John Ortiz, a leader of the 1968 walkouts, said in the Los Angeles Times.

For their part, the University of California and California State University systems will not take any actions against students who participate in the walkout. And officials at the various UC and CSU campuses, like many throughout the country, sent out statements assuring prospective students that any discipline they receive for walking out on March 14 won’t be held against them in the admissions process.

UC Berkeley sent out this tweet: “Dear prospective students: We fully support your right to peacefully protest, and would never refuse your admittance for doing so. Signed, the home of free speech.”