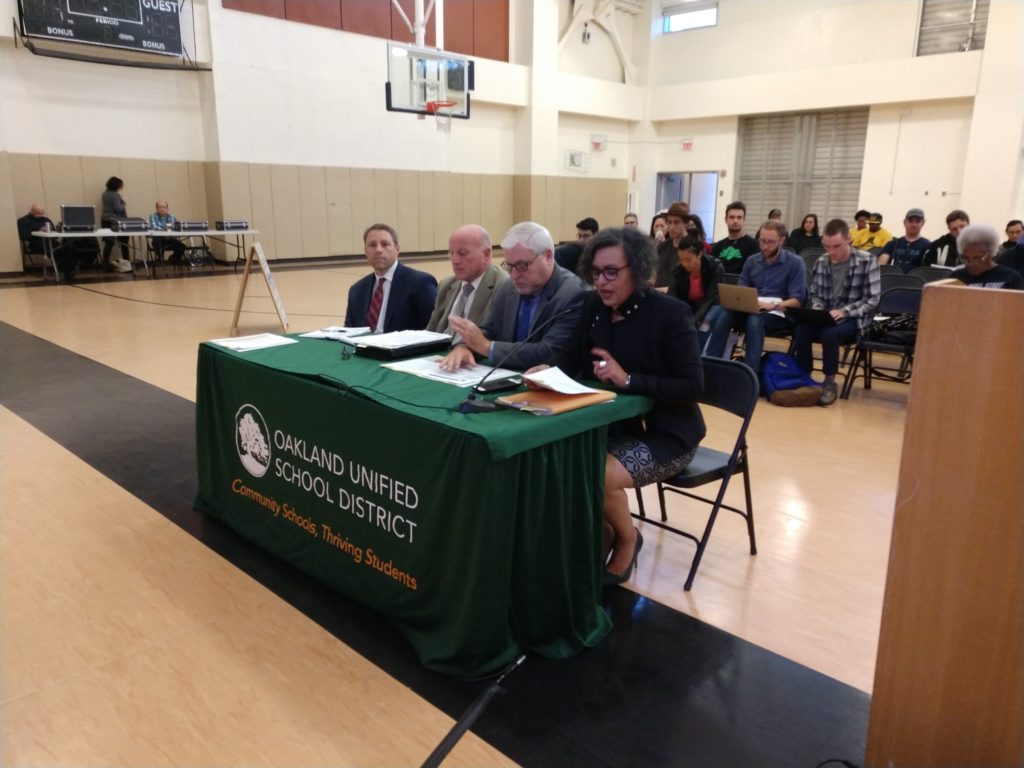 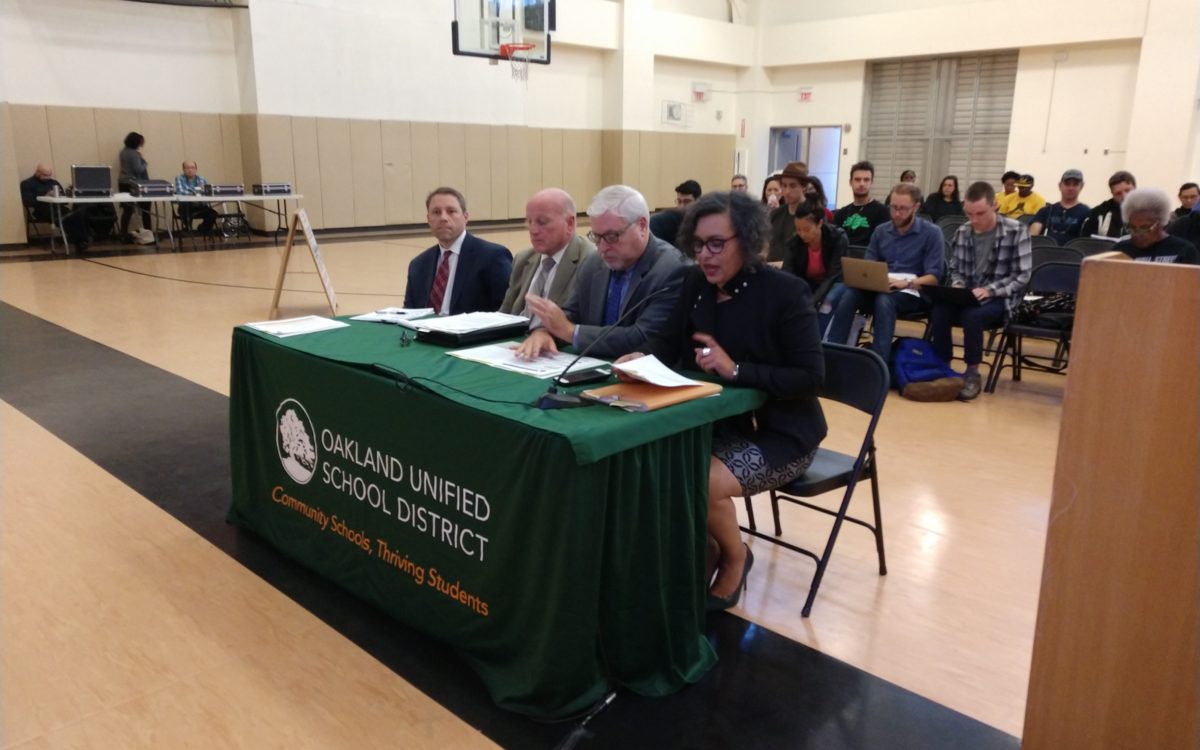 Courtesy of Oakland Unified/John Sasaki
State and county officials (l-r) Nicolas Schweitzer, Christopher Learned, Michael Fine and Alameda County Superintendent of Schools Karen Monroe address the Oakland Unified school board on Oct. 24, 2018 regarding the requirements of AB 1840, which could provide state money to the district to help cover its projected deficits for three years.

Courtesy of Oakland Unified/John Sasaki
State and county officials (l-r) Nicolas Schweitzer, Christopher Learned, Michael Fine and Alameda County Superintendent of Schools Karen Monroe address the Oakland Unified school board on Oct. 24, 2018 regarding the requirements of AB 1840, which could provide state money to the district to help cover its projected deficits for three years.

If Oakland Unified doesn’t make millions of dollars in budget cuts over the next four years, it could risk another state takeover, state and county officials said. 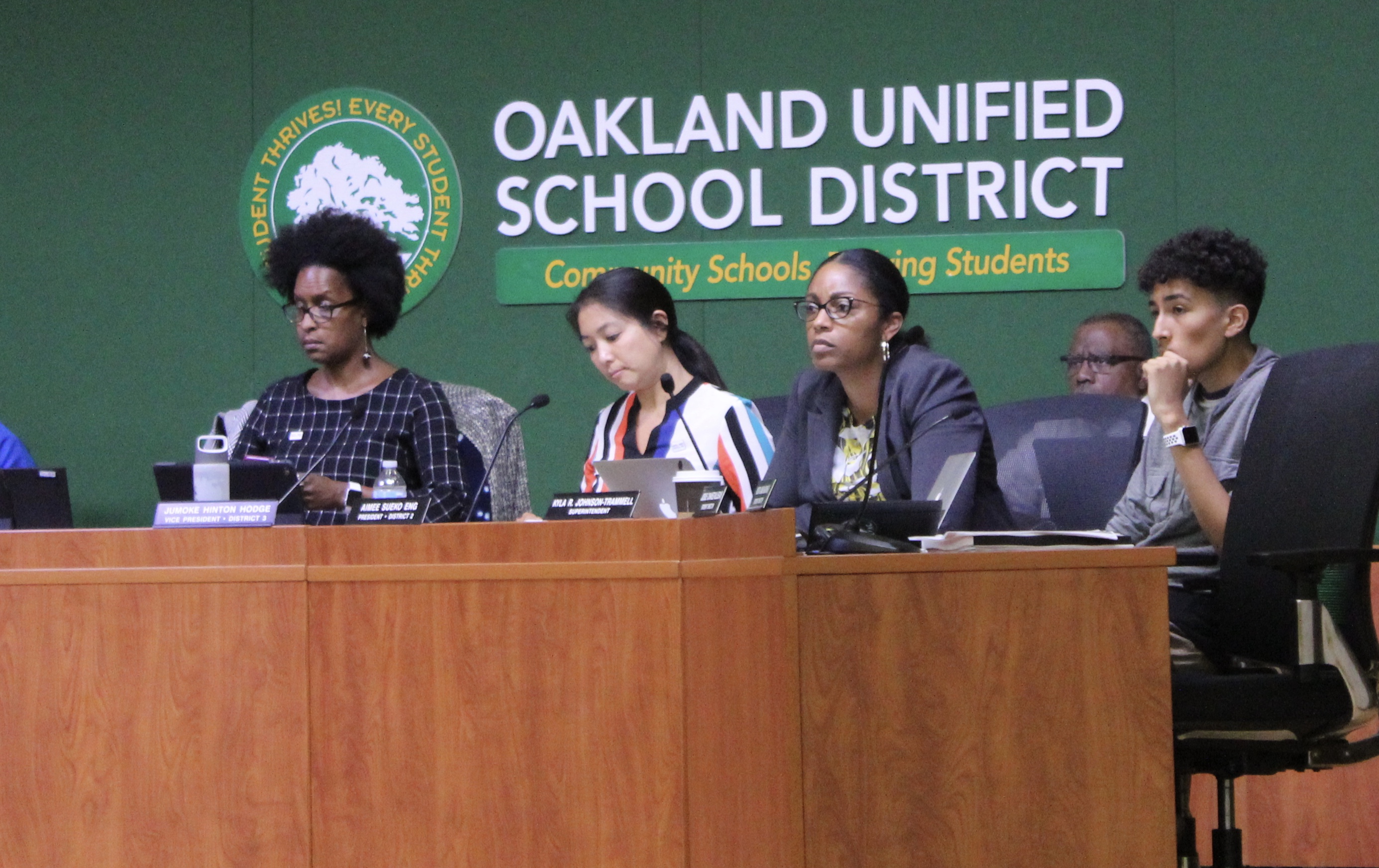 A bailout approved by the state Legislature in the AB1840 education finance bill could relax the timeline for those cuts, but also requires the school district board to follow through on its plans to close schools and eliminate staff positions. The state funding is expected to help the district close its budget deficit over the next four years, with the first allocation coming in 2019-20 if the district meets certain “benchmarks.”

The board, which has been criticized by the Fiscal Crisis and Management Assistance Team, or FCMAT, and the Alameda County Civil Grand Jury for not having the political will to make difficult decisions, recently got a dose of tough talk about the path it has to follow if it wants to get the money.

“If you choose not to make a decision, a decision will be made for you,” said Michael Fine, CEO of FCMAT.

If the district is successful in finalizing and implementing its plans, the state will give the district money to offset a portion of its deficit from 2019-20 through 2021-22, he said.

As the head of a nonprofit fiscal oversight agency established by the state that is monitoring Oakland Unified’s finances, Fine didn’t mince words during a meeting last week with the district’s leadership.

“Whether you accept this assistance or not,” he said, “you must get your financial house in order.”

He and Alameda County Superintendent of Schools Karen Monroe reminded the board that if the district fails to balance its budget, it could need another state loan or the county and state could impose cuts, which would put the district back under state control.

So far, the district is considering reductions of $16.5 million next year. These are expected to include:

The district is also hoping to generate about $2 million next year through facilities rentals to the public and is starting up a Saturday school for students who miss class during the week. The new weekend classes are expected to generate about $1 million next year, increasing by $500,000 each year. That would generate state funds based on the average daily attendance of students. 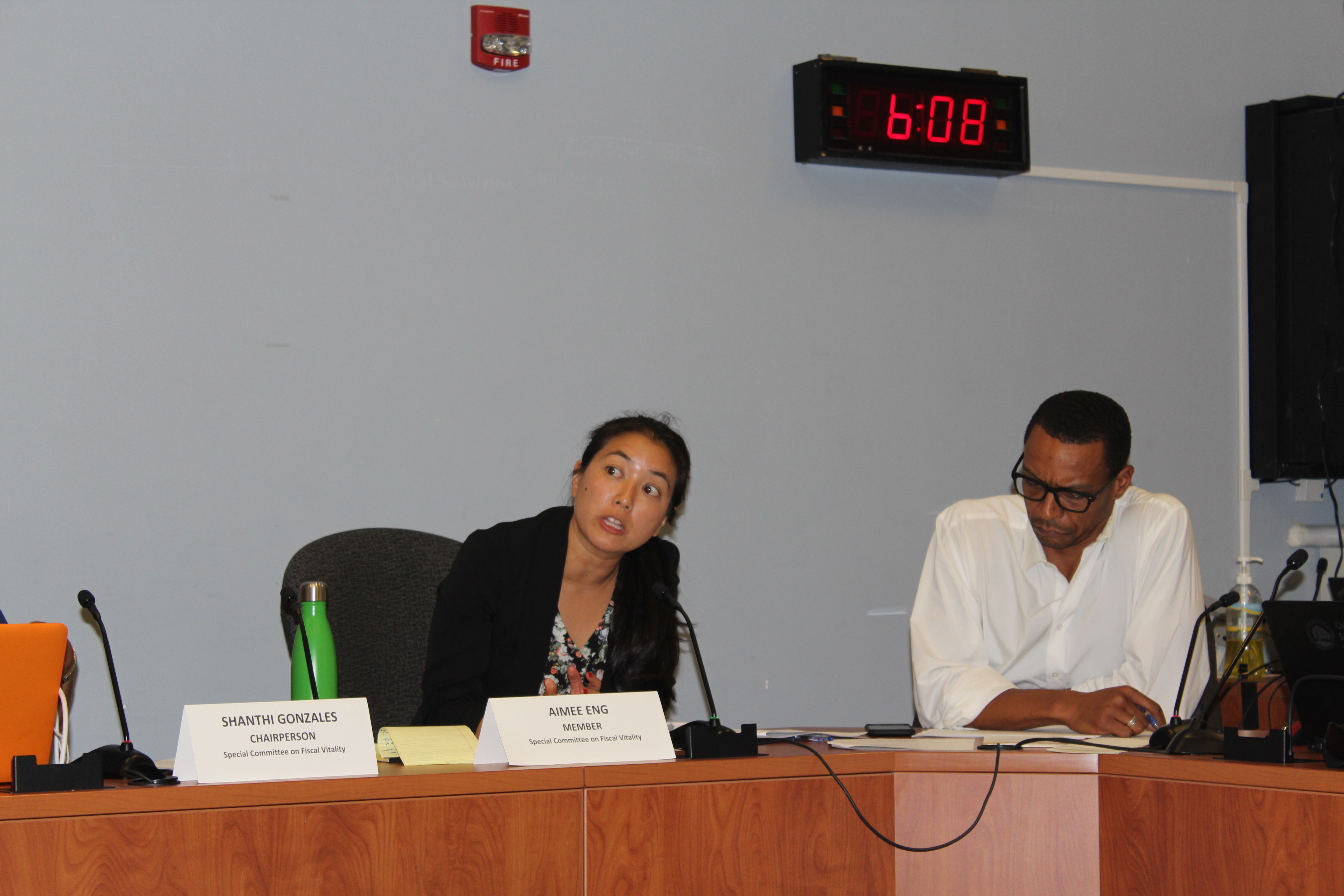 By the end of 2021-22, the district expects to save $56.8 million including $1.3 million through closing or consolidating schools, while generating about $8.6 million through facility rentals and Saturday school classes to help close its ongoing deficit.

These ideas will go before the public on Nov. 28, when the board plans to hold a community engagement meeting to discuss them. Parents, staff and other community members are being asked to complete a survey on budget priorities.

Kyla Johnson-Trammell, superintendent of Oakland Unified issued a message to the community signaling that the district must change.

“We cannot tinker around the edges and expect something great,” she said. “I want us all to lean in to this tough situation in order to build a better, bolder OUSD that serves all students.” She reminded the community that the district has already developed a Fiscal Vitality Plan to improve its budgeting process and is working to reduce the number of schools in the district, due to long-term declining enrollment, through its “Community of Schools” policy.

She described the district’s three main goals: to balance its budget by making cuts, give teachers a raise, and improve the quality of district schools.

“We may need to stop some current programs so that we can create better programs or drive more resources directly to students,” she said. “For example, we will be consolidating schools so we can concentrate our resources and improve programs. We will support students, families and staff going through those transitions.”

The board has already decided to consolidate Alliance Academy and Elmhurst Community Prep into one school and to consolidate Futures and Community United Elementary Schools into one school next year, while expanding MetWest High. District staff is currently considering additional schools to close or consolidate in the future and expects to update the board on potential sites Nov. 14, according to the superintendent’s Oct. 24 board report.

The state Legislature agreed to provide bailout funding to Oakland and Inglewood, which is still under state receivership, to help both districts make “thoughtful decisions” instead of “knee jerk decisions,” Fine said. The state expects both districts to finalize and implement budget-cutting plans already underway to achieve long-term financial stability, he added.

Although the board in August agreed to make $30 million in cuts next year to balance its budget, it is unclear now whether the district will be required to cut that deeply to balance next year’s budget since its ending balance in June was nearly $12.4 million higher than anticipated and the bailout will cover up to 75 percent of the district’s deficit in 2019-20.

However, Fine said the district may need to make deeper cuts than the $16.5 million currently proposed next year to stay on track toward meeting its original goal of slashing costs by $30 million next year and reaching a total of $60 million in cuts by 2020-21.

“That’s the very first benchmark,” he said. “If you stop at $15 (million), that will not achieve the benchmark.”

However, he said the numbers could change based on budget revisions that reflect actual revenues and expenditures. A 2018-19 budget revision presented later in the meeting increased district revenues by nearly $15.8 million to $582.3 million, but also showed $60.9 million in new expenditures that were not fully explained.

Johnson-Trammell said she would bring final recommendations for budget cuts to the board by February.

If the board decides not to accept the strings attached to the state bailout, it would be forced to make up to $30 million in cuts next year, Fine said.

While stressing that the state and county want to help Oakland achieve its goals, Monroe said it is “critically important” that the board follow through with its budget-cutting plans.

“If we see that those budget balancing strategies are not being implemented,” she said, “we will have to impose strategies.” The strategies imposed would likely follow the plans outlined by the board, but the county would ensure that they are “acted upon,” she said.

Board member Roseann Torres said she has heard that some districts throughout the state that are facing their own fiscal challenges due to declining enrollment and the proliferation of charter schools “are frustrated and upset” that Oakland is getting this special bailout. Monroe and Fine said they’ve heard the same thing.

Some other financially challenged districts, Fine said, are asking: “If I fail in my job, will I get state assistance as well?”

“We all worked very hard to avoid an additional loan,” Fine said, “because that’s the direction you were headed in.”

Even if the district doesn’t take the bailout money, the county superintendent could “impose a functioning budget on you,” Fine told the board, reminding them that the county still has not given its final approval for the district’s 2018-19 budget. If it ends up needing a loan because it hasn’t made the cuts necessary to balance its budget in the next few years, it could be taken over by the state again, officials said. That would mean the school board could lose its powers and become advisory only and a district oversight administrator would assume the powers of the board and superintendent.

But board member James Harris said the district could achieve its goals without taking the money by making the cuts necessary to balance its budget.

Torres said the district needs a state moratorium on charter schools to be able to plan effectively. The board will hold a retreat Nov. 26 to meet with a legislative adviser from School Services of California, an educational consulting company that advises districts on budget issues, to develop a legislative platform, board member Jody London said.