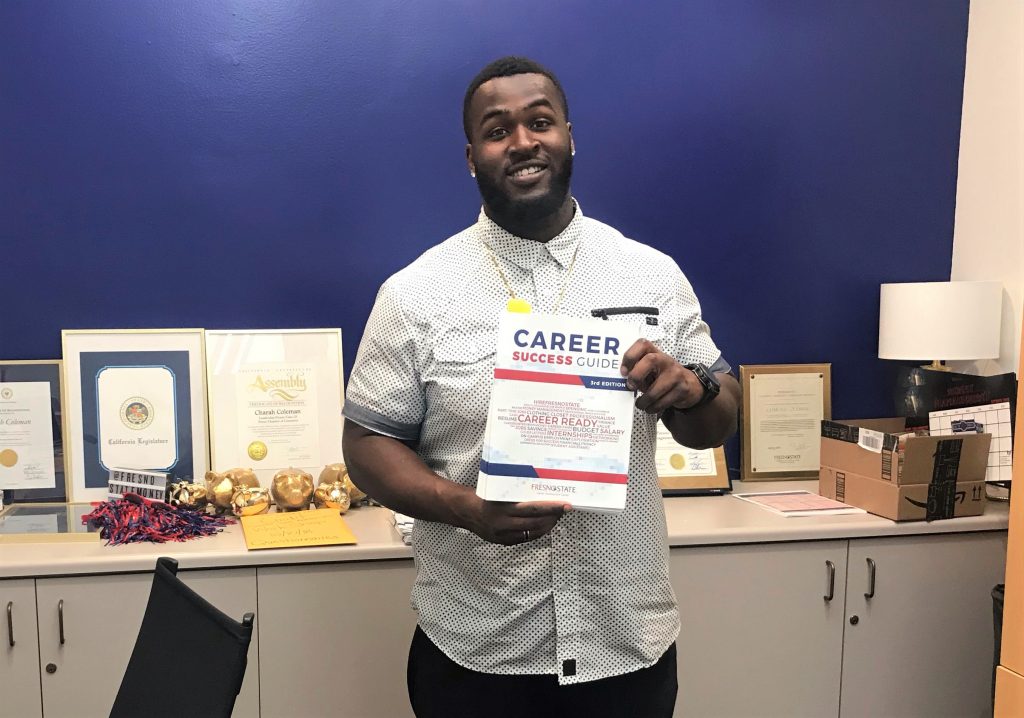 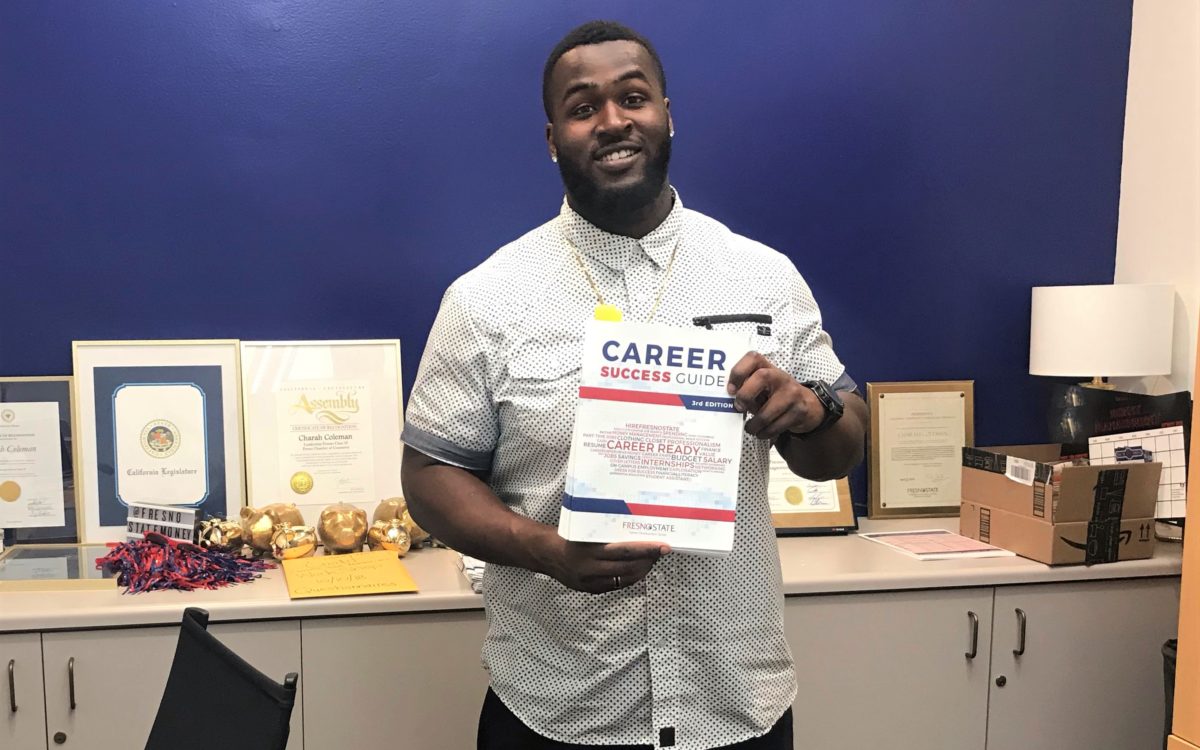 At the start of this semester, Brittney Mendez, a junior at the University of California at Merced, was working about 30 hours a week as a nighttime server at a sushi restaurant. Even though she receives financial aid to cover tuition, the political science major said she needed the job to pay off-campus rent, food and other expenses at the Central Valley campus.

“You just want to be able to concentrate on school but to be honest you also have to worry about paying bills,” said Mendez, who is 20 and from Garden Grove in Orange County. But juggling studies, job and student government activism proved too “exhausting” and she was worried her grades would suffer — and in turn jeopardize financial aid. So she recently quit the restaurant job and landed a ten-hour a week on-campus position as a library attendant. To make up the money difference, she is taking out extra student loans.

Her dilemma is shared by hundreds of thousands of college students in California and nationwide who balance school with substantial employment.

Now, their job schedules are receiving more scrutiny from educators who are increasingly worried that working more than 15 or 20 hours a week can harm students’ grades and academic progress. That is an important issue in California where the state’s public universities are trying to push more students to finish their bachelor’s degrees in four years rather than five or six. For example, across the California State University system, the most current four-year graduation rate among students who entered as full-time freshman averaged 23 percent last year; 59 percent finished within six years.

Even though tuition costs at the 23 Cal State universities and ten UC campuses have been relatively stable over recent years, financial aid has not kept up with rising housing costs, pushing more students to work more hours. As a result, state officials are considering ways to reform and expand financial aid to encourage students to work less and take more classes. Some schools are counseling students to borrow moderate amounts rather than work so much. But, that advice faces pushback from many families who are legitimately worried about debt.

“There is increasing awareness of the pressures students face in working and learning,” said Jim Larimore, chief officer of the ACT Center for Equity in Learning, an educational research group established by the organization that sponsors the ACT college entrance exam.

Larimore’s center last year published a report that found that working more than 15 hours a week appears to especially harm low-income students’ chances to graduate. The more work hours a student takes on beyond 12 or 15 a week, “the more risk you take on in jeopardizing academic achievement or time to degree,” Larimore said.

Among low-income students, 63 percent of those who worked less than 15 hours a week graduated within six years compared to 41 percent who worked more hours, according to the report. Low-income students tend to work off-campus, rather than or in addition to on-campus work-study jobs that accommodate their school schedules better, the study noted. Work-study usually limits students to 15 or so hours a week, which is not enough for students who need more funds or have to help support their families.

Federal statistics show that 27 percent of all full-time undergraduates worked more than 20 hours a week and 70 percent of part-timers did in 2015, the most recent numbers available. That dovetails with a recent survey of this year’s Cal State Fresno graduates, who attended full- or part-time: 47 percent said they worked 20 or more hours a week during college.

Warnings that working more than 15 hours per week can delay graduation rang true to Fresno State student Elijah Surall, a communication major who works between 30 and 50 hours a week on- and off-campus. His jobs included driving a shuttle for a car rental agency, installing home security systems and now, his own business, detailing and cleaning cars. In the past, his family income was too high to qualify him for most grants but his family could not support him because of medical emergencies, he said. Now 24 and a senior, he is considered independent of his family and was able to receive a $3,800 Pell grant. Yet he still feels he has to work a lot to pay his bills.

Surall, who grew up in the Central Valley community of Manteca, said he often feels “caught” between “making sure my bills are paid and keeping my grades up.” He said his grades suffered as a result.

Now, he will bring those experiences to a new position as a peer counselor at a recently established Money Management Center at Fresno State. Students will receive advice on spending, working hours and aid. Surall received extensive training for the counseling spot and said his own history makes him a better, sympathetic adviser: “I was a person who was looking for help and didn’t know where to find it.”

Fresno State’s new center aims in part to help students understand alternatives to long work hours without forcing them to change, said Charah Coleman, center coordinator. “We can only coach them to consider how their choices will impact them academically,” she said.

Working less than 15 hours a week “typically benefits students” by improving work ethics, time management and helping provide contacts, according to a more recent report, “Balancing Work and Learning: Implications for Low-income Students” by Georgetown University’s Center on Education and the Workforce. However, the study documented negative effects of working more than 15 hours a week among students of all income groups and most strongly on those from households reporting less than about $40,000 a year. Among those less affluent students who worked fewer than 15 more hours, 46 percent had a C, D or F grade average; but when low-income students worked more hours, the share who earned a C or lower rose to 59 percent, the study said.

Jobs related to students’ field of study are beneficial, but higher-income students are more likely to hold such part-time internships compared to lower-income students who need more work hours to cover basic expenses, the report noted.

“Richer kids are working to get a foot in the door in internships (for later careers). The poor kids are working for survival,” explained Nicole Smith, a co-author of the Georgetown study and chief economist at the center.

Low-income students feel pressure to work more in part because federal Pell Grants, have not kept up with rising college expenses, explained Smith. (Congress recently approved a $100 increase in the maximum Pell Grant to $6,195 for 2019-20.) In addition, low-income families are more “risk averse” to traditional education loans because many may have scarring experiences or fear of the process, she said. That backfires, her report emphasizes, if students rely on high-interest credit cards and then work such long hours that their grades drop. Moderate borrowing should be viewed “as an investment,” Smith said.

California housing costs make things worse. As a result, state officials are considering ways to expand the Cal Grant program to cover more costs beyond tuition for low- and moderate-income students. That could help reduce students’ work hours, according to Lande Ajose, chairwoman of the California Student Aid Commission.

In addition, she said, the commission is looking at the possibility of a state-funded work-study program. (Most work-study is federally funded and demand for those jobs far outstrips available funding.) Besides helping students’ pocketbooks, such on-campus jobs offer more reasonable hours and “potentially align better with their course of study,” said Ajose, who is also executive director of California Competes, an advocacy organization that researches ways to help more people earn college certificates and degrees.

Jose Rodriguez, a third-year biology pre-med major who helps support his parents and siblings in Porterville, said he may sign up for the money counseling. He receives aid to cover tuition and some housing costs and took out his first student loan this year. Still, he works more than 30 hours a week, on overnight shifts as a bedside medical transcriber at a hospital and extra hours at a yogurt shop.

“Sleep is limited,” he said. And so is social life. Rodriguez, who is 20 and the oldest of five children, said he “feels pretty stressed out a lot of the time” but is still able to keep a high GPA and volunteers as a mentor for younger students in science and math. His tight schedule forces him to focus sharply on his studies since “I don’t have time to waste on other things.”

Asked for advice to younger students considering long work hours, he said: “If you don’t have to do it, don’t do it. Focus on your studies. But if you have to support other people, you have to do what you need to do.”

Meanwhile at UC Merced, Brittney Mendez had reduced her academic credits from 16 to 12 this term to accommodate the job she just quit. She will return to 16 in future semesters to graduate four years after starting college. She also intends to enroll in study courses for law school admission tests, something her waitress job prevented.

“I want to take advantage of all the opportunities being given to me right now,” she said.