New science standards a boon for the littlest learners 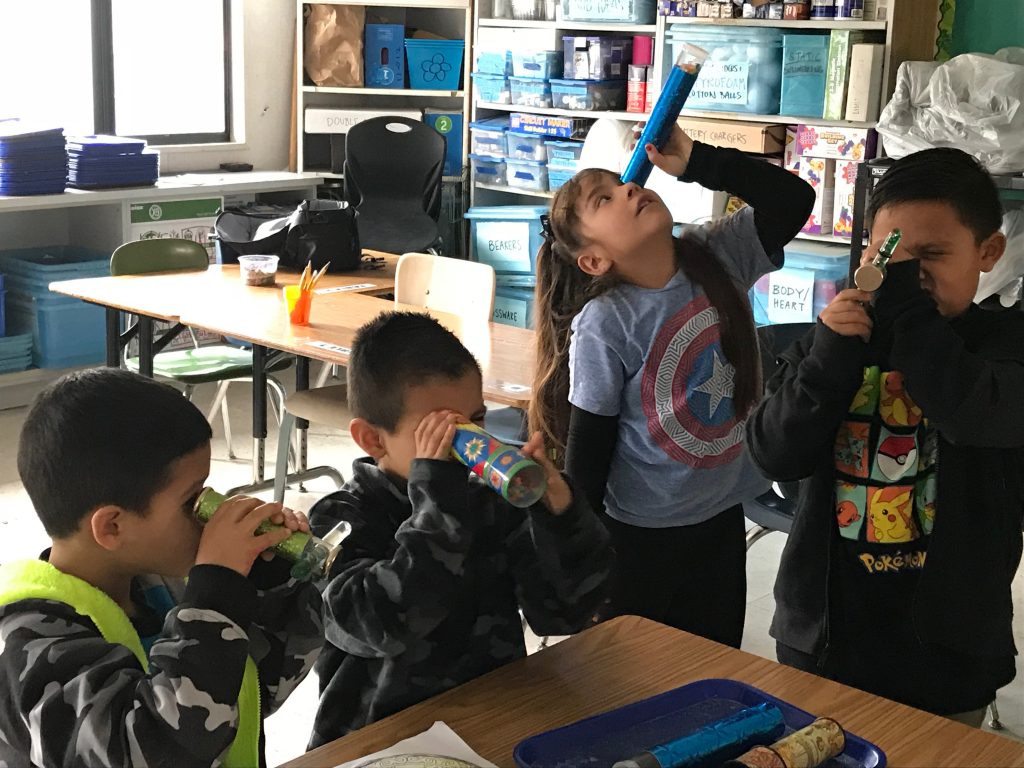 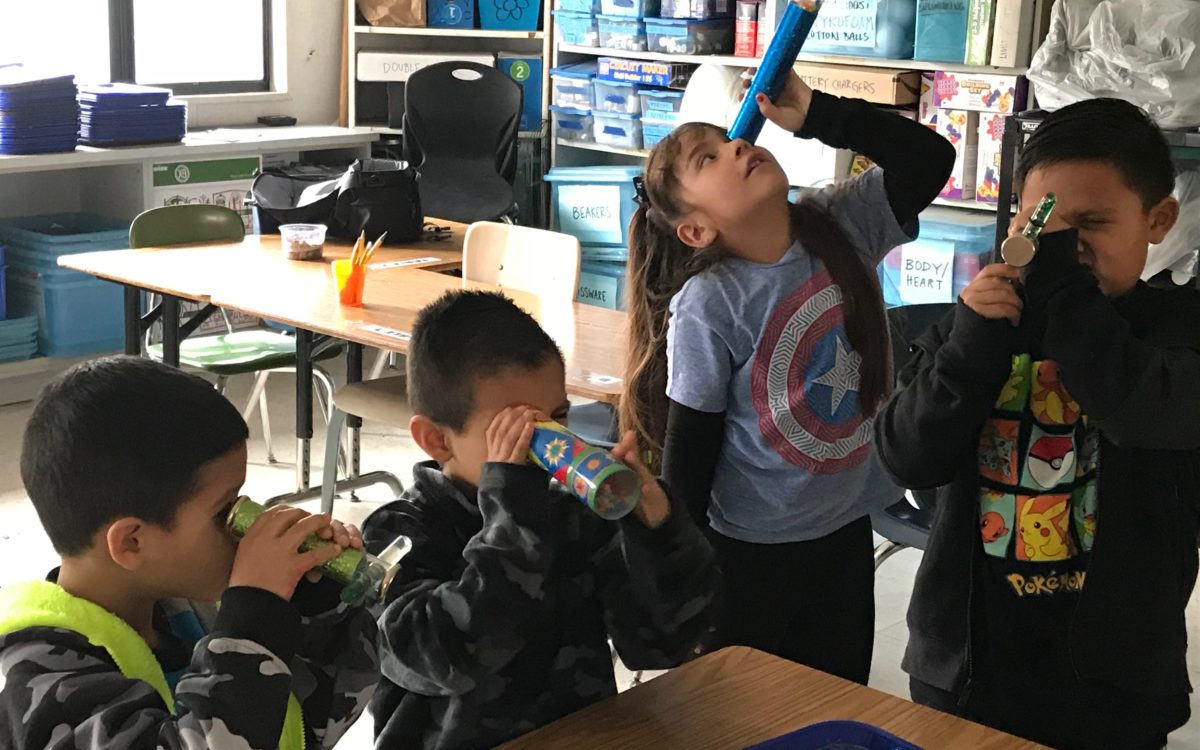 Science education has long been a weak spot at some elementary schools, but educators are hoping California’s new science standards — if implemented well — will entice teachers to expand and improve science lessons for the youngest students.

“Science education has been severely lacking, especially in K-2,” said Rena Dorph, interim director of the Lawrence Hall of Science at UC Berkeley. “I hope it will change, but it will depend on a lot of factors — policy, resources, local control, support for teachers and quality of curricular materials, and how it’s prioritized at the district level.”

According to a 2016 study by WestEd, SRI International and the Lawrence Hall of Science, more than half of kindergarten and 1st-grade teachers in California spend less than an hour per week on science. Science time increases as children reach 5th grade, when they take their first standardized science tests, but overall, 40 percent of K-5 teachers devote an hour or less per week to science, the study found.

The reason, teachers told the study researchers, is that schools face increased pressure to meet standards for math and English language arts, which leaves little time for science. Teachers also said they have limited money to pay for science supplies. Only 8 percent of teachers said lack of student interest was a reason.

The problem stems from the No Child Left Behind Act, the 2001 federal education law that required schools to assess students regularly in math and English language arts, with less emphasis on science and other subjects, said Jessica Sawko, executive director of the California Science Teachers Association.

But the recent shift to local control, the replacement of No Child Left Behind with the Every Student Succeeds Act, and the implementation of new science standards should make it easier for elementary teachers to devote more time to science, especially in the younger grades, Sawko said. Giving more funding control to districts allows them to invest in teacher training, field trips, supplies and other endeavors that can improve science education. The Every Student Succeeds Act puts less emphasis on math and English language arts test scores than No Child Left Behind, which allows schools more leeway to teach other subjects, especially in the younger grades.

“Science is central to how we understand and make sense of the world around us,” Sawko said. “All of our students need and deserve a strong science education that starts in the earliest years that prepares them for productive futures, no matter what their future educational and career path will be.”

The new science standards, called the Next Generation Science Standards, focus on hands-on classroom projects and broad scientific concepts, and begin in kindergarten. Some elementary teachers say that once they learned the new standards, science became easy and more rewarding to teach, especially to younger children.

Ali Orsi-Davis, an elementary science teacher at Longwood Elementary in Hayward Unified, has seen the results firsthand. When she arrived at the school seven years ago, before the new science standards were adopted, a typical entry in the school’s science fair would be a do-it-yourself volcano with baking soda and vinegar. A great science project for 2nd-graders, she said, but these were 6th-graders.

But last year, after the current crop of 6th-graders had been learning the new science standards for several years, a typical science fair project involved finding the filthiest place in a student’s house. The student had a hypothesis (that the bathroom doorknob was the dirtiest), a method to test the hypothesis (collecting germs from various locations around the house and growing them in a petri dish), recorded his observations and drew up a conclusion. The dirtiest place in the house, it turned out, was the TV remote control.

“I saw exponential growth in students’ understanding of the scientific method, and what’s expected of them,” Orsi-Davis said. “I had been drilling the scientific method into them for years. It was so rewarding to see them really get it. Now they come to me with their own ideas for the science fair. They get really excited about it.”

Orsi-Davis spends 50 minutes once a week with about 600 students at Longwood, a K-6 school in a residential neighborhood of Hayward in the east Bay Area. Eighty-eight percent of the students are English learners, foster youth or receive free or reduced-price lunch.

Using grant money from foundations, Orsi-Davis has purchased telescopes, human body models and other supplies so her students can do science experiments several times a week. She also works with the students’ regular classroom teachers to ensure the students get at least some science every day, and their lessons complement what she covers in her classroom. She also helps them combine science with other subjects, such as reading and math.

On a recent afternoon, Orsi-Davis was leading a class of 1st-graders in a lesson about light. Using kaleidoscopes, mirrors and flashlights, the students scurried excitedly around the classroom experimenting with shadows, reflections and prisms. Orsi-Davis introduced them to a few vocabulary words — “opaque” and “transparent” — but otherwise let them discover the wonders of light themselves.

“The less I talk, the better the lesson,” she said.

Lorraine Slattery-Farrell, chair of the child development and education department at Mt. San Jacinto College in Riverside County, said the best way to teach science to young children is to allow them to play, socialize and experience the scientific concepts themselves, much like what happens in Orsi-Davis’ classes.

“Activities should be both achievable and challenging enough to promote curiosity and learning,” Slattery-Farrell said. “Effective curriculum at this age integrates play and socialization into all areas, providing opportunities to work in groups where children learn from each other as well as from the teacher who guides the work.”

A strong science education in the early years can make science easier later on, she said.

That’s what Rachelle Fabionar, a science teacher at Foothill Elementary in Pittsburg Unified, in Contra Costa County, has observed as well. She teaches the new science standards for an hour or two per week to 550 1st-through-5th-graders, and charts the students’ progress over time.

“Exposing them to science vocabulary and concepts in 1st grade makes it less scary. If I can get them used to things like force and cause and effect when they’re young, by the time they’re in 5th grade they’re ready to rock and roll,” she said. “And then when they’re in middle school none of it is foreign to them. They can dive right in.”

Keeping students busy also makes classroom management easier, she said. Six-year-olds can be wiggly and not keen on sitting still for long periods, and science projects allow them to work out their physical energy while still learning.

Young children are innately curious about the natural world, she said, so it’s not difficult to engage them with science. As they’re experimenting, she encourages them to ask questions, predict outcomes, test their ideas and collect evidence and data.

“I love watching their progress, seeing them grow,” she said. “I love that moment when they get it on their own. … And when they teach me something, that’s the best.”