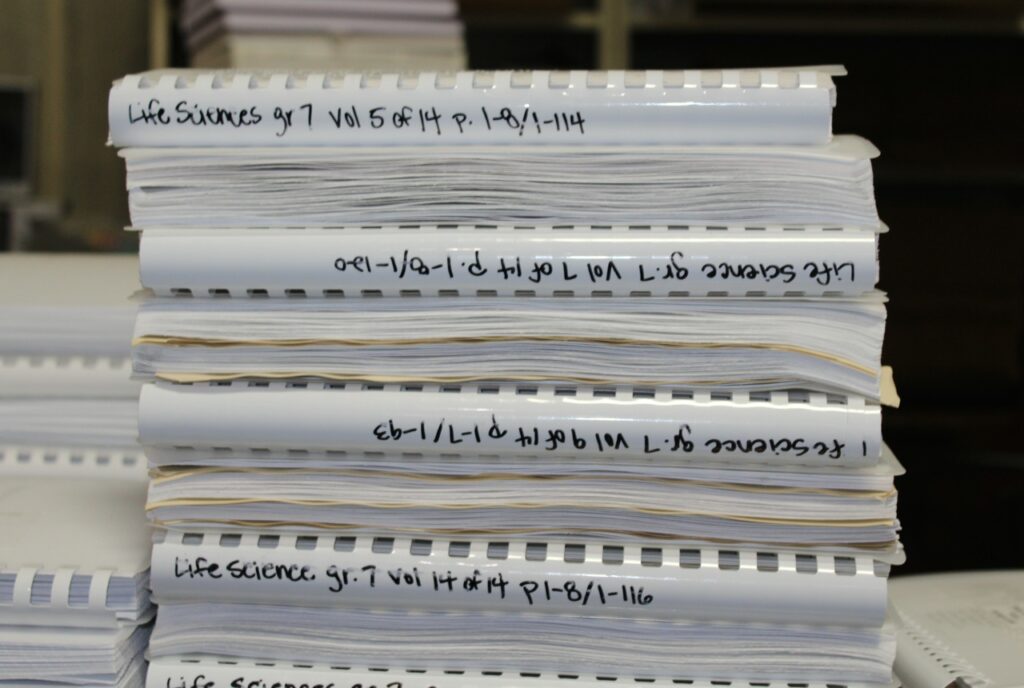 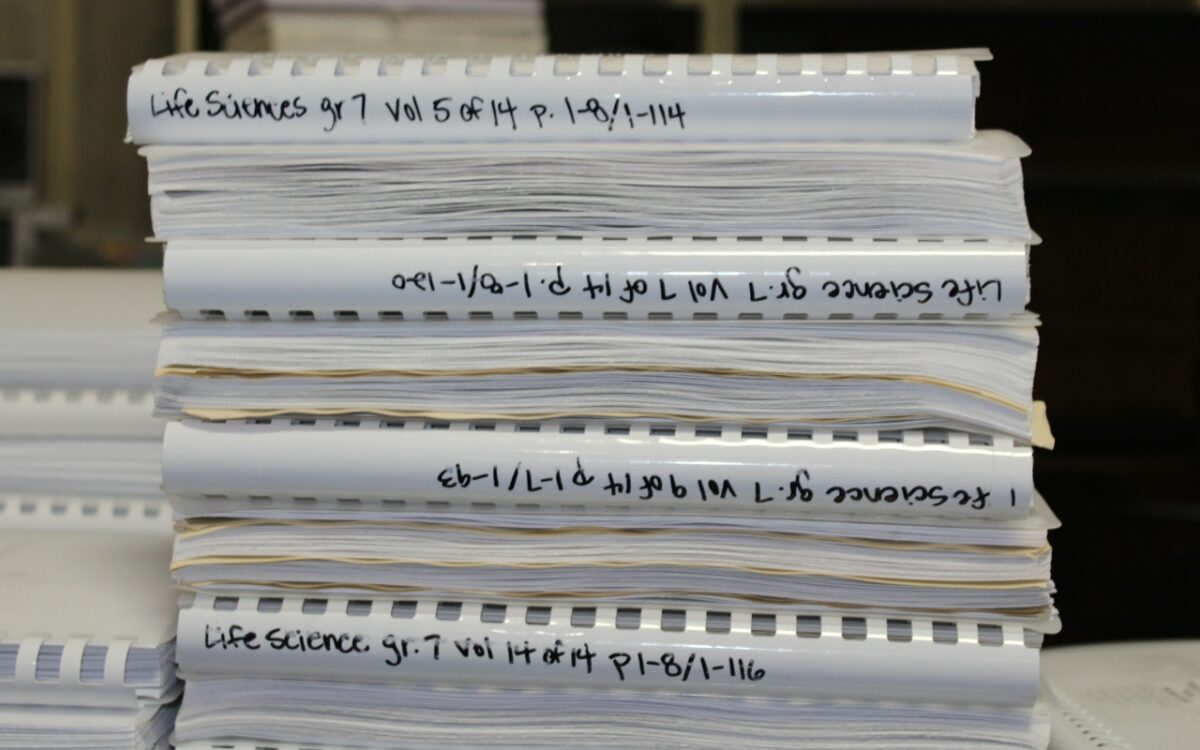 As high school student in Los Angeles, Ann Wai-Yee Kwong, who is visually impaired, remembers what it was like when her classmates did a science project. They mixed chemicals and watched them change color, checked liquid temperatures using a thermometer and measured speed and velocity by racing toy cars down a ramp.

Kwong couldn’t do much besides sit quietly and “robotically copy data from my non-disabled peers. … I definitely did not feel included. I felt like a second-class citizen.”

But in her senior year at Valley Academy of Arts and Sciences in Los Angeles Unified, an explosion of new technology made it much easier for blind students to study science the way some educators say it’s best learned: by doing hands-on projects, not listening to someone else talk about it.

Using digital Braille readers, “smart” pens affixed with thermometers, 3-D printers, audio textbooks and other innovations, Kwong and other blind and visually impaired students can now conduct their own science experiments and even pursue scientific careers that might have been exceedingly difficult before.

These innovations, which first started appearing about a decade ago, have revolutionized science education for California’s 45,691 blind and visually impaired K-12 students. One of the most important inventions has been the digital Braille reader, a laptop with voice software and a plastic Braille keyboard in which small round pegs raise and lower to form Braille letters, enabling a blind person to read and create text.

Thanks in part to Braille readers and other advances, Kwong developed a love of science and went on to earn a bachelor’s degree in psychology from UC Berkeley and is now pursuing a doctorate in education from UC Santa Barbara.

“It always felt like blind people couldn’t do anything as visual as science. Chemistry, especially,” Kwong said. “But now we have an equalizing of the playing field. I feel like I’m finally empowered to be part of my own education.”

Another popular technological innovation for blind students is Bookshare, an audio book service that includes more than 600,000 textbooks, novels and other materials. Books are read aloud by a computer-generated voice and are also available in large print and Braille directly from an Internet browser.

Designed by engineers at Benetech, a Silicon Valley nonprofit, Bookshare is used by half a million people worldwide. It’s available for free to blind, visually impaired and dyslexic students, funded through a $42.5 million, five-year award from the U.S. Department of Education. The award, which is contingent on budget approval every year, has been renewed twice since it was first awarded in 2007.

Audio books have been available for decades, but titles are limited due to copyright laws and can be expensive to produce because the books are read by actors or the author. Benetech has copyright arrangements with publishers to provide books online to blind and visually impaired students — a relatively limited market — that are read by a computer-generated voice, so production costs are minimal. Bookshare users must be blind or visually impaired. The service is free for students but non-students can use Bookshare services for a fee.

In addition to expanding Bookshare, Benetech is also developing software to enable blind students to show their work while deciphering math problems and encouraging book publishers, distributors and schools to increase their technological offerings for those with limited vision.

“I’ve had very intelligent — exceptional, even — students who were totally blind, who were deterred from the science field because of how difficult it was,” said Michael Cheverie, teacher at Los Angeles Unified.

The software also benefits students with learning disabilities, not just those who are visually impaired, said Betsy Beaumon, Benetech president. Students with dyslexia, for example, use reading software to help decipher words and enhance comprehension. The potential market for such software is so large, she said, that engineers should consider broader markets when designing all educational programs, she said.

“You have a lot of students who could benefit from accessible technology who have no diagnosis at all, just like curb cuts have benefits for people who don’t use wheelchairs,” she said. “Making these products just for blind people is generally not seen as a big enough market, but it doesn’t have to be that way.”

Benetech also develops software to promote human rights, alleviate poverty and protect the environment. But programs for blind students are a priority, she said.

“Our goal is that every blind or visually impaired student gets a full education and have the chance to be an astronaut, if they want to,” she said. “You shouldn’t have to be Stephen Hawking to get to the highest levels of science. It should be available to everyone, and it shouldn’t be hard or expensive to do.”

But for blind student Karen Arcos, digital Braille readers and Bookshare have helped but ultimately it wasn’t technology that enabled her to succeed in science. It was great teachers, she said.

Arcos’ parents, both of whom are teachers, often took her to museums and on scientific excursions and helped her with school work when she was a child. To explain volume and surface area, for example, her mother gave her a cardboard box to feel, then cut it open and laid it flat so Arcos could understand how three dimensions can become two.

In high school, Arcos had an AP biology teacher who took extra time to describe visual concepts like photosynthesis so Arcos could understand without relying on images. A blind chemistry professor at Cal Poly San Luis Obispo hosts an annual summer chemistry camp for blind high school students that has inspired Arcos and hundreds of others. And while Arcos was an undergraduate at USC, a biology professor gave her a plastic brain to take apart and feel the different parts so she could understand how they connect.

“The quality of the teaching is the No. 1 thing that helped me,” said Arcos, who’s been blind since infancy. “In the area I’m studying, technology is helpful but it’s the teachers who make the difference.”

It was those teachers who inspired her to pursue science. After earning her undergraduate degree in psychology, Arcos is now pursuing a doctorate in cognitive neuroscience at UC Irvine. She plans to research topics related to blindness, such as Braille literacy.

Too many high school science teachers have low expectations of their students, whether the students are blind or not, Arcos said. Having motivated, inspired and knowledgeable teachers is the best way to help students of all ability levels, she said.

“Sometimes it seems like the teachers themselves are a little intimidated by the material,” she said. “If they have that kind of self-doubt, how are they going to teach someone who’s visually impaired?”

One of those inspirational teachers is Michael Cheverie, who assists blind students in Los Angeles Unified and taught both Arcos and Kwong. He accompanies blind high school students to class and helps them with lessons that are challenging for students who can’t see, such as music or Advanced Placement chemistry.

Technology such as Bookshare, 3-D printers and digital Braille readers — computer tablets with movable Braille keyboards — have had a significant impact on the education of blind students, he said.

“When I started doing this, 14 years ago, students had to use old Braille readers that were like manual typewriters. They worked but they were very slow,” he said. “I’ve had very intelligent — exceptional, even — students who were totally blind, who were deterred from the science field because of how difficult it was. But with the new technology, I feel like we’re closer to leveling the playing field than we’ve ever been.”

Newton Nguyen, who’s been blind since middle school and is now studying for a doctorate in environmental science and engineering from California Institute of Technology, has relied on 3-D printers, plastic models and software that reads text on a computer screen. He also hires people to read for him and describe images and graphics, and has become an expert at Unix, a computer operating system in which the coding language is in black and white and uses simple numbers and letters, making it easy for computerized voice software to read back to him. Using Unix, he can read and write codes for his doctoral research.

All of this enabled him to earn an undergraduate degree in geophysics from UC Berkeley and work as a researcher for NASA and the U.S. Department of Energy. Before the technology became available, he was “pretty much flying by the seat of my pants, just figuring it out on my own.”

“Why do I subject myself to this torture? Good question,” he laughed. “I do it because science is fun. I always felt science would help me with rational thinking, with analyzing real problems in life. It’s not always easy, but that’s life. There’s not always pretty solutions for everything. You have to learn to figure things out on your own.”