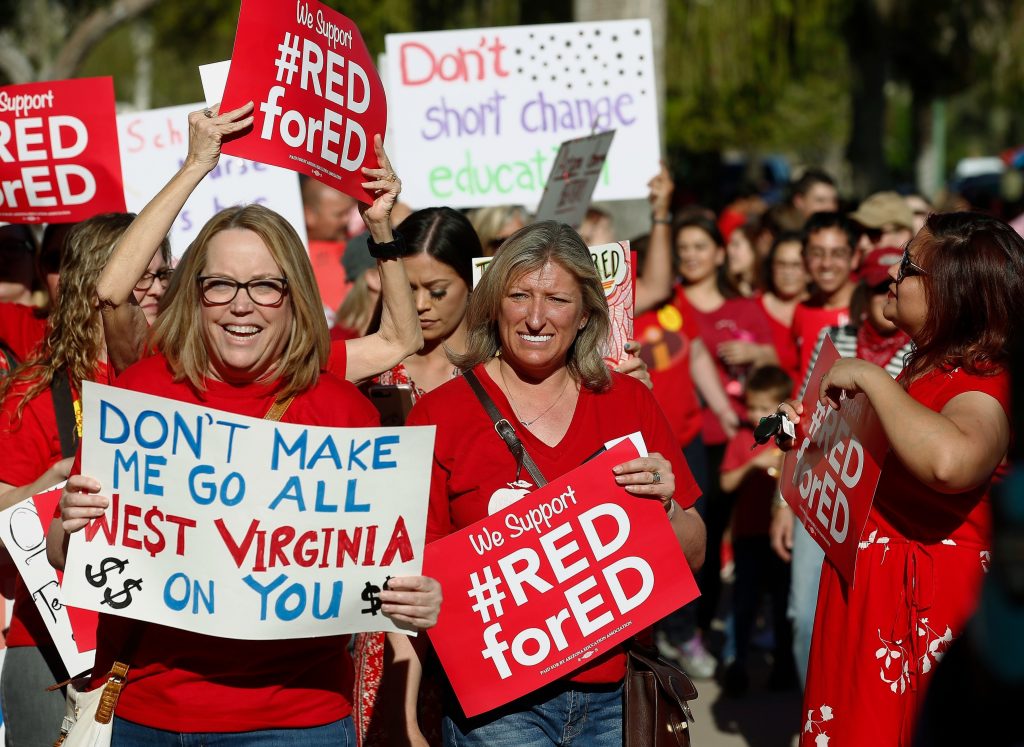 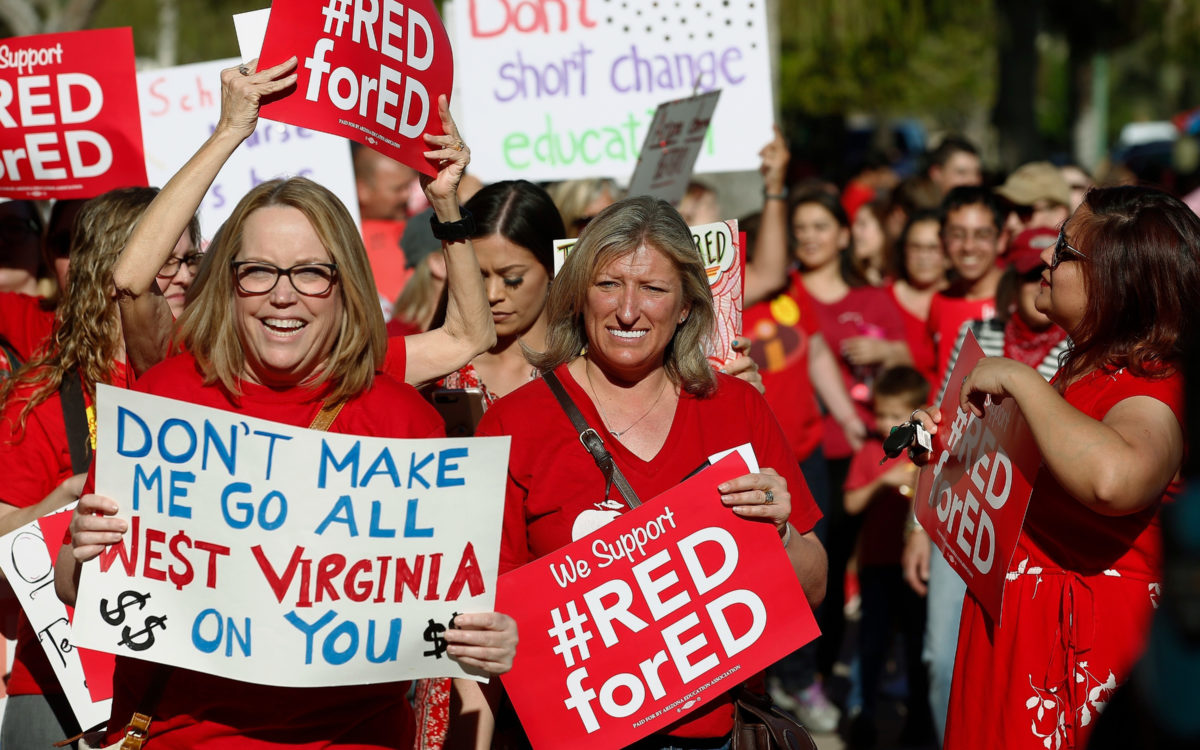 Teachers are on the march.

Lashing out against low pay and what they see as paltry state spending on education, teachers in West Virginia, Kentucky, Oklahoma — and recently Arizona and Colorado — have made national headlines by walking off the job in unprecedented displays of statewide solidarity.

And while there’s no telling when and where the wave of teacher strikes will crest, don’t expect grassroots, Facebook-driven walkouts to wash over California. 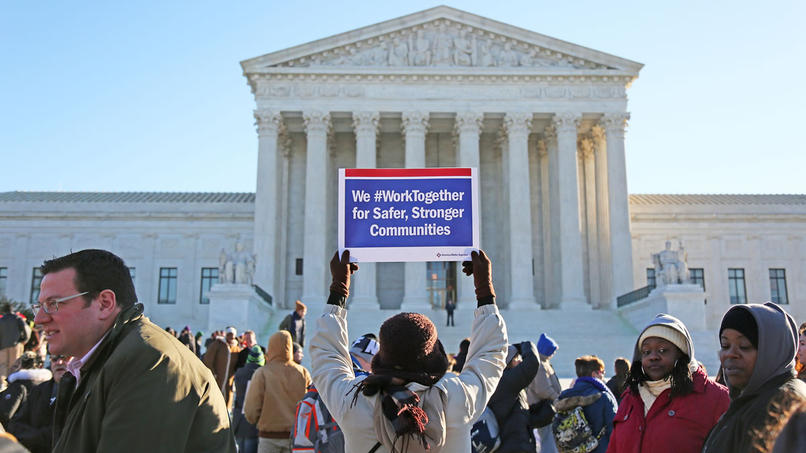 The reasons for this are simple: the states where teachers are striking are almost all “right-to-work” states, where workers don’t have to join or contribute to a union in their workplace. As a result, teachers in these places generally have less bargaining power and lower wages and benefits. And in two of the striking states — Oklahoma and West Virginia — state legislatures set teacher salaries.

Meanwhile, in California, long-established teachers unions continue to have support from a solidly Democratic Legislature. And, in recent years, California voters passed and renewed a sizable tax increase, targeted for schools, when other states were cutting school funding. Also, contracts negotiated independently in nearly 1,000 school districts would make statewide strikes difficult to pull off in any way.

Yet, with the U.S. Supreme Court poised to render a decision next month that could significantly weaken public employee unions, labor unrest in other states is resonating in California. It is serving as a harbinger of what could happen if unions here lost their clout and gains made over the years in teacher pay and benefits were rolled back.

If the court’s conservative majority rules as most expect it to in Janus v. American Federation of State County and Municipal Employees, public sector workers in California and 21 other states will no longer be required to pay what are known as “agency fees,” which fund the unions’ costs of bargaining and representing them.

Currently, unions receive these fees thanks to a 1977 Supreme Court decision (Abood v. City of Detroit Board of Education) which holds public-sector employees don’t have to join the union and pay dues to support its political activities; but they do have to pay for services unions provide employees like collective bargaining and the filing of grievances.

If Janus prevails, Abood would be overturned and a guaranteed revenue stream that unions have long taken for granted would be in jeopardy. This likely outcome is forcing California teachers’ unions to do something they haven’t had to do for more than a half century — hustle to get teachers to voluntarily sign up as dues-paying members.

Capitalizing on the news cycle, for now

As fate would have it, all the news footage of desperate teachers from other states walking picket lines has served as a compelling sales pitch, at least for the short term.

“The first question I ask when I go around to school site meetings is: ‘Who is paying attention to what is going on in West Virginia and Kentucky?’” said Alex Caputo-Pearl, president of United Teachers of Los Angeles [UTLA]. “Members who were disengaged are more engaged now.”

Teachers in those states are “at the fire’s edge of pushing back against austerity,” said Eric Heins, president of the California Teachers Association.

“California is not in the same place,” with a pro-union Legislature and governor, he said, but still, class sizes are large and the state is near the bottom in per-pupil spending. And in places like the Bay Area and parts of Southern California, teachers can’t afford to rent or buy a house.

The implicit message to teachers: Sticking together will protect union members from the fate of states with weak unions, because “together we are strong; individually, we are vulnerable,” Heins said.

Unions, however, won’t be able to thrive in the post-Janus world on sales pitches alone. They also need a wide member base that values the contracts they’ve won and trusts both state and local union leaders to represent their interests.

Currently, about 90 percent of California’s 325,000 teachers pay full union dues, which average $1,009 a year statewide, according to the CTA. Of that amount, $656 goes to the CTA to pay for a combination serving local unions and politicking: lobbying in Sacramento and contributing to candidates that the CTA’s State Council endorses.

An additional $187, on average, goes to the National Education Association, the parent union in Washington, D.C. On top of that, an average of $166 stays with the local union.

Roughly 10 percent of the state’s teachers pay only the required agency fees, an amount that’s about two-thirds of full union dues. It’s those teachers, who right now only pay the required fees, that the CTA anticipates will stop paying entirely if Janus prevails. But the CTA is warning local unions to anticipate losing another 10 percent of their members should the Supreme Court rule in favor of Janus.

The Fresno Teachers Association is one of the few locals that plan to seek an increase in dues this spring as a precaution. Jon Bath, lead contract negotiator for the union, said union leaders are confident members will agree that “we have done a lot for our folks” with a new contract giving an 8.5 percent raise over three years.

But some warn the membership losses could be greater and point to Wisconsin, where the Legislature stripped public unions of most collective bargaining rights in 2011; and then in 2014 abolished mandatory union fees. Two years later, fewer than half of the state’s school districts had certified teachers’ unions.

The chances that will happen in Democratically dominant California are remote, says Charles Taylor Kerchner, professor emeritus at the School of Educational Studies at Claremont Graduate University. “Janus will not be the death knell of unions,” Kerchner said. “Far from it. [But] that doesn’t mean it will not be a problem.”

Janus has the potential to splinter teachers’ unions along generational and political lines, with looming concerns over rising pensions costs and the CTA’s progressive positions on issues like immigration becoming flashpoints.

Interviews with union leaders across the state revealed that while there is widespread agreement on the challenges they face, the strategies for meeting those challenges are varied.

Consider the contrasting models of unionism in San Jose and Los Angeles. For the San Jose Teachers Association, the emphasis is on collaboration, while UTLA thrives on confrontation with LA Unified’s superintendent and school board.

Two decades ago, San Jose teachers and the administration reached a deal to set aside two-thirds of general state revenue the district receives for teacher pay and benefits, and that ratio has remained in successive contracts. Taking that key issue off the bargaining table cleared the way to focus on other issues. San Jose Teachers Association President Patrick Bernhardt said that all but two of 1,700 teachers are currently members.

“We have a productive partnership, with labor peace. We can solve little problems that would result in grievances in other places,” Bernhardt said.

But Bernhardt acknowledges he’s anxious about life after Janus. “In a world where every local constantly has to be prospecting for membership, it’s easier to organize around a crisis and fear — against a villain,” he said. “I think about how can we organize around the positive work we do. But it’s a harder argument to make.”

Caputo-Pearl and UTLA, whose members are working without a contract, are taking a hard-ball approach, which includes a boycott of faculty meetings and a strike authorization vote later this month.

“We’re building a fighting union, and that’s the kind of union that will attract and retain members post-Janus,” Caputo-Pearl said. “Educators in West Virginia organized and took risks. We will have to do the same.”

Tuned in or out of touch?

Manuel Yvellez, a teacher in the Chula Vista Elementary School District and past president of Chula Vista Educators, the district’s local union, agrees that strong unions are needed — but is highly critical of the CTA. He said its leadership isn’t adequately prepared for the post-Janus realities and has in the past failed to deliver on promises to effectively lead negotiations at contract time.

“Many people say CTA is an expert in bargaining — I didn’t see that expertise,” said Yvellez, who describes himself as a “disrupter.” “They not only didn’t provide the expertise they advertised, they fumbled the ball.”

Yvellez also faults the union for not focusing enough on bread-and-butter issues like threats to teacher pensions, and for taking sides on polarizing topics like immigration that could alienate teachers with more conservative views.

“When you focus on [the Deferred Action for Childhood Arrivals program] you just alienated 20 to 30 percent of teachers,” Yvellez said. “They ask: ‘Why am I paying $100 a month to support a political cause I don’t believe in?’ I’ve heard that from a lot of teachers.”

Ed Sibby, a communications consultant for the CTA’s southern region, said the union’s stances on such issues reflect the view of its younger members, which he says will be more important than ever if Janus prevails.

“Change is tough, and CTA has had blinders about some big issues” like teacher tenure and creative union-district collaborations, said Julia Koppich, a consultant who has researched union reforms in California. “It hasn’t been willing to consider some locals moving in different directions.”

One alternative voice is Teach Plus, a national nonprofit, with a chapter in Los Angeles, that provides training and research opportunities to teachers for future leadership roles, whether in districts, charter schools or unions. Members, like Josh Brown, a Los Angeles Unified special education teacher who wrote a recent commentary on tenure for EdSource, have challenged union orthodoxy.

But Brown and Bootsie Battle-Holt, another Teach Plus fellow who also serves in UTLA’s House of Delegates, said that what unites teachers with the union is stronger than what divides them.

“No matter what happens with Janus, we will really want to have a strong union,” Battle-Holt, the 2016-2017 LAUSD and LA County Teacher of the Year, said. “There is mass job insecurity.”