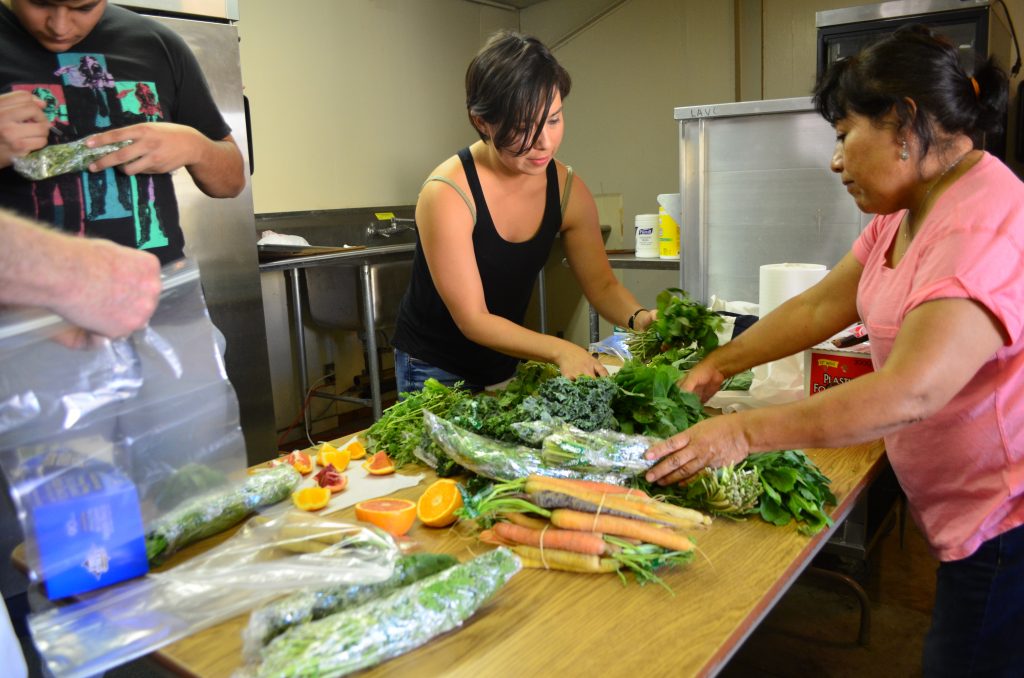 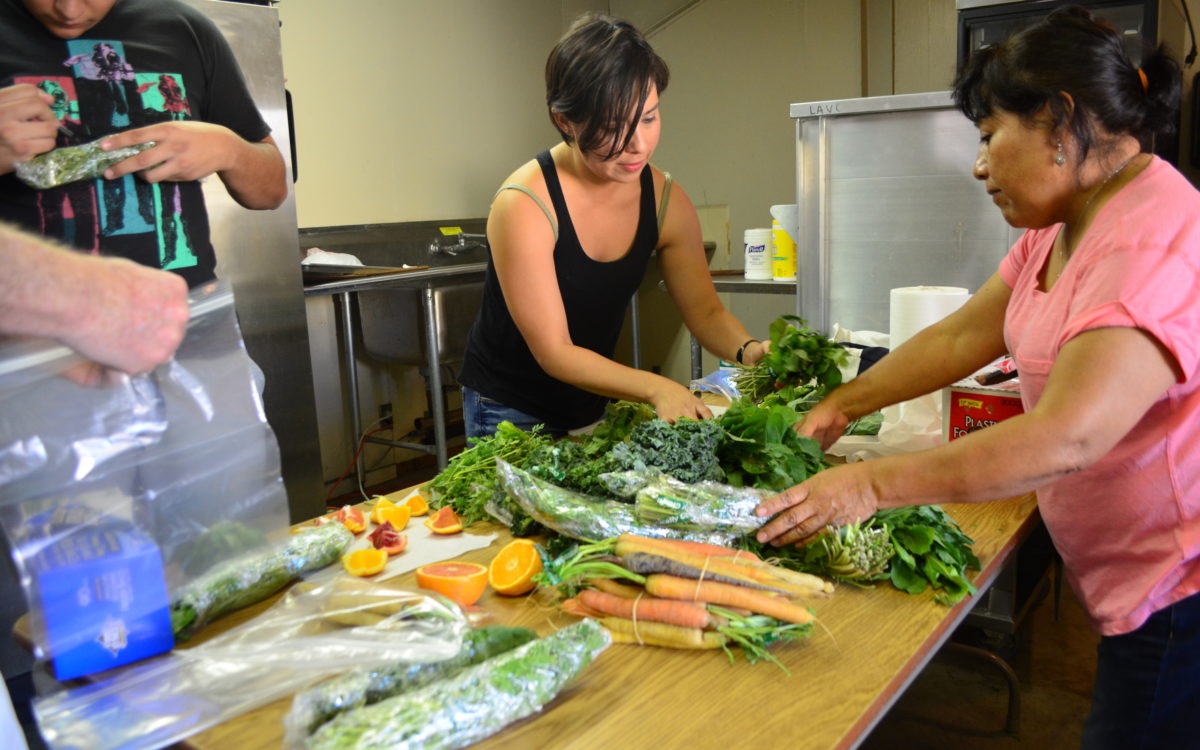 A year after graduating from North Hollywood High School in 2013, family disputes pushed Michael Jaramillo to living on the streets.

Sometimes he’d find relief, like when his friend invited him to stay with his parents for two weeks. Odd jobs in construction, moving services and retail netted him just shy of $800 a month and enough to swing hot meals and the occasional night at a hotel.

During several episodes of homelessness totaling nine months he slept in laundromats, hospital waiting rooms, other people’s cars and on the rooftops of apartment buildings. While other 19-year-olds crammed all night for college exams, he “would bust an all-nighter and just walk around” on evenings he couldn’t find a place to rest.

Thanks to a series of breaks Jaramillo is now a student at Los Angeles Valley College and, with his work-study job, is part of a growing effort to help students struggling with hunger or homelessness.

And last fall, nearly half a decade after finishing high school, he completed his first semester as a community college student. His transcript: Three A’s, one B.

Valley College is one of more than 100 community colleges that are beefing up their services for students who lack adequate food or shelter. The effort gained urgency after Chancellor Eloy Ortiz Oakley proposed a “Vision for Success” that was embraced by the system’s board of governors last July. The plan, among other academic priorities, called on campuses to assist students with food, tutoring, childcare, transportation or other support, and to pair with county and social service agencies to help students access the services they need.

“What do you do to keep and retain the students that we have?” said Doug Marriott, who supervises these programs at Valley College as dean of adult/community education and workforce development. “If it’s one staff member that connects them with the resource that keeps them here, that helps the whole system.”

Similarly, the California State University has launched what it is calling a “ basic needs initiative” to address food and housing insecurity among its students.  Last week in Sacramento it hosted what Chancellor Timothy White said was the first CSU
conference of its kind to focus on the issue.

“Getting this right is simply something that we need to do,” White said.  And UC campuses are in the midst of a Global Food Initiative that is focusing resources on student housing and food insecurity.

California Community Colleges, which is the nation’s largest system of higher education, consists of 72 districts and 114 colleges serving 2.1 million students per year. Fourteen months ago, Colleen Ganley was hired to help the system’s colleges do more to assist students facing food and housing problems. “Students need to make hard choices between ‘Do I buy my books or do I have three nutritious meals a day,’” she said.

Recognizing the large number of students struggling to afford adequate food, the Legislature last year allocated $2.5 million through a Hunger Free Campuses program to the California Community College system to develop food pantries and designate staff to connect students with government food subsidies. Funds were allocated to all the campuses including nearly $29,000 to Valley College.

Not all the cases of student need are as dire as Jaramillo’s, but the college, like virtually all community colleges in the state, enrolls many poor students.

In 2016-17, 61 percent of Valley College’s 28,000 students received tuition waivers because their household incomes were below $36,375 for a family of four. (Students also qualify for help if they are eligible through a federal formula or through the California Dream Act grant for undocumented and nonresident documented students.) Systemwide, 41 percent of students received tuition waivers in 2016-17.

California community colleges have recently begun asking students whether they are homeless on enrollment applications. There’s no study that captures a nationally representative sample of community college students experiencing homelessness but there are clues to the extent of the need. The college serves a metro area that in recent years has seen a surge in homelessness. Los Angeles County ranks second only to New York City in the number of homeless, according to a 2017 federal housing report. A 2017 Survey on Food and Housing Insecurity gives a glimpse of the problem.

Completed by almost 6,000 of the 238,000 students in the Los Angeles Community College District during 2016, the survey showed that 59 percent said they had gone hungry in the last month because they lacked the money to buy food. The same survey reported that 19 percent of students surveyed had some experience with being without a place to sleep over the prior 12 months. The largest group – 11 percent responded yes to  “…Did not know where you were going to sleep, even for one night.”

The social service programs at Valley College range in size and funding — from textbook borrowing and tutoring programs for parents with young children to helping students sign up for CalFRESH, California’s food stamps program. There’s also help for students with children who qualify for state aid under the CalWORKS program.

Some of the campus programs have been around for decades. But it’s only recently that school leaders have been linking them together so that the college’s staff can share resources and knowledge about the region’s patchwork of government and nonprofit groups aiming to chip away at poverty’s pervasive effects on student learning.

“What Doug [Marriott] is doing is he’s making sure that when a student is identified as needing support services that they’re not bounced between 16 different offices, that they have a unified experience,” said Ryan Cornner, vice chancellor of educational programs and institutional effectiveness at the Los Angeles Community College District, where nearly a third of the students are ages 30 and older.

Like at Valley College, Ganley has been encouraging more partnerships between county and nonprofit groups that work in these areas.

To that end, the system is due to release a survey in the next two months detailing the largely voluntary programs colleges are creating to ease the burdens of hunger and homelessness, from creating food pantries to offering emergency financial aid. It’s also working on a primer for how community colleges can better serve homeless students, which should go out to campuses in about a month, Ganley said.

This survey was prompted by a 2017 report the community college system conducted that found while almost all faculty and staff at the state’s community colleges agreed or strongly agreed that some students are dealing with homelessness, just 15 percent said their campuses are prepared to offer aid to students experiencing unstable housing and lack of food.

For his campus job, Jaramillo calls local homeless service nonprofits and food pantries on behalf of the college’s students, compiling data on which shelters provide meals, showers and laundry services, among other basics.

One of the campus centers helping students cross the academic finish line is the Family Resource Center. Funded with outside grants but run by Valley College, the center provides a suite of services to students who are parents and juggling school and the responsibilities of raising children.

Amber Angel, a coordinator at the center and a former Valley College student herself, said 29 percent of the students are parents and most of the children are 18 and younger. The center, which serves about 1,100 of the student-parents, keeps a wardrobe of free baby clothes organized in drawers by age. It runs a textbook loan program for students who can’t afford to buy them. And it also has play areas near the computer labs so that student-parents can work on assignments while center interns supervise their children.

Without help from the Family Resource Center, “I wouldn’t be able to concentrate on studying,” said Charmaine Cram, a nursing student, in between dropping off her son and writing a paper with her tutor for an English class at the adjacent lab.

There’s also a lactation room for mothers, including a refrigerator for breast milk, something Angel wishes she knew about sooner as a student there. “I had been pumping in the bathroom and I had been carrying a cooler with me to keep my breast milk cold while going to classes,” said Angel, who earned an associate degree in child development before transferring to CSU Northridge for her bachelor’s in science and family studies.

The center also partners with the campus Helping Hands volunteer program, which enlists faculty and staff to raise money for student supplies and collects produce every week from a nearby farmers market to distribute at several campus locations that about 100 to 150 students take advantage of, said Marriott.

On a recent Sunday Hector Salazar, who works in the college’s receiving department, returned to campus in his pickup truck with seven boxes of cilantro, sage, blood-red oranges, butter lettuce, heirloom carrots and more.

A volunteer squad of college employees, including Jaramillo, met Salazar at a campus kitchen to wash, cut, wrap and store the food in industrial fridges so it’s ready to be distributed to the pantries the next day.

Much of that food makes its way to the Family Resource Center, where the colorful leaves, fruits and root vegetables sit in clear plastic trays against a backdrop of children’s toys and a play area.

“They have a good selection. They basically don’t limit us to what we can get, so I can grab like a week’s worth of vegetables here,” said Lilly Huerta, 38, who’s earning an associate’s degree in respiratory therapy at the college, works part time and is a parent to a 3-year-old daughter.

She estimates the pantry saves her up to $30 a week, which stretches her food supply because she only receives $90 a month in CalFRESH food assistance.

The center can’t promise to solve all of the students’ problems but even veteran staffers can be surprised.

After picking up some produce, Huerta asked a center staffer if the center had an algebra book for her Math 125 class. She asked before for another book, but came up empty. This time, however, the staffer offered Huerta a used textbook. After a minute of paperwork, the tome was Huerta’s for the rest of the term.

As she exited the building clutching the book and vegetables, Huerta beamed, “Oh, I’m so excited for my book, thanks.”