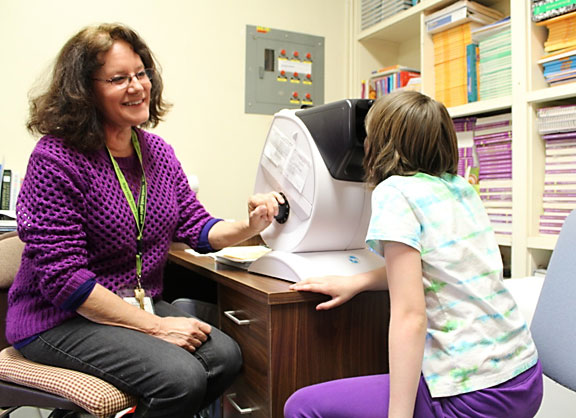 California ranks at or near the bottom of all states when it comes to the percentage of students with access to health and mental health care at schools. Yet, with $90 in added annual spending per student — which would total about $600 million — the state could provide basic care at all public schools, according to a new report.

Currently, California has approximately one school nurse for every 2,240 students and ranks 39th on that measure compared to other states. California has one school counselor for every 1,000 students, ranking it last nationally, according to the study, which is part of the “Getting Down to Facts II” report series released this week.

Reback made a point of saying that schools might be the best place to tackle this problem. “Public schools may be a relatively desirable location for efficient and widespread distribution of health and mental health services to children,” the report said.

At latest count, there are 257 school based health care centers in California serving more than 270,000 students, according to the California School-Based Health Alliance. But this is just a small fraction of the state’s 6.2 million K-12 students.

“Schools are a logical place to provide health care for young people — whether through school nurses, school-based health centers, or school mental health providers,” said Lisa Eisenberg, policy director for the alliance. “There is a lot of incredible work happening in schools to address health barriers to learning and, still, we’re just scratching the surface.”

Leaving resources on the table

He estimates it would take approximately $31 per student to provide enough counselors to provide basic mental health services at all K-12 schools and $59 per student to expand mobile health clinic coverage to schools without existing health care programs. These increases would amount to less than 1 percent of the approximately $70 billion that is spent each year on California’s public schools.

However, Reback acknowledged that adding these resources would require significant action from the state Legislature and governor.

“There are currently no requirements at all for counselor coverage in California and little incentive in the education policy sector for health coverage,” Reback said in an interview with EdSource. “It would take a new policy to incentivize school districts to provide at least some coverage for the general school population.”

Another key reason why the state’s resources for health and mental health care in schools are lower than most states, the report said, is districts often don’t take advantage of federal dollars that can be spent on in-school services for low-income and disabled students.

Medi-Cal — which is California’s version of the federal Medicaid program — will reimburse school districts for 50 percent of allowable services they provide to eligible students. But districts don’t bill for these services, which can include mental health screenings, at near the rates they could be, the report said.

“It’s fair to say that school districts in California are leaving substantial federal dollars on the table,” Reback said.

Part of the blame for this can be placed on the state’s system for how Medi-Cal money is accessed. For example, on its own, a school district can only access federal dollars for mental health screenings of special education students.

The responsibility for all other children lies with the county departments of behavioral health, which provide mental health services. This means that districts have to work with those departments in order to get screenings in schools paid for by Medi-Cal. That’s not always happening, Reback said.

For other health services, districts can directly bill Medi-Cal for half the costs. But the process is cumbersome and has led to disputes between districts and the California Department of Healthcare Services, the report said.

While all districts face significant challenges, the report found that students in rural areas and large suburban districts suffer more from a lack of access to health services than their counterparts in urban and smaller suburban districts.

For example, 13 percent of elementary schools in rural areas have in-school health services compared to nearly 30 percent in small and mid-sized suburban districts. This is largely due to smaller suburban districts doing a better job of accessing Medi-Cal funding, the report said.

When it comes to actual availability of mental health services the reality is worse than the numbers indicate, Reback found, because the data does not accurately distinguish the time counselors spend assisting students with course selection, college applications and career decisions rather than on mental health issues.

“National estimates of high school counselors’ weekly time-use reveal that the majority of counselors focus on academic advising rather than on mental health,” the report said. “61 percent spend no more than a few hours on students’ personal development.”

The geographic differences notwithstanding, Reback was surprised to find that unlike many other aspects of school quality, a community’s affluence was a not a clear predictor of health and mental health service levels. In fact, he found that schools serving higher poverty students will often have more mental health services than schools in wealthier neighborhoods.

He said a school could have services that others don’t have because its principal has made it a priority to develop a partnership with the county health department, or because a local nonprofit receives grant funding to provide services to a particular school.

“A lot of it has to do with luck and happenstance,” Reback said. “It’s not necessarily based on a school’s demographics.”