What California can learn from universal preschool in other states 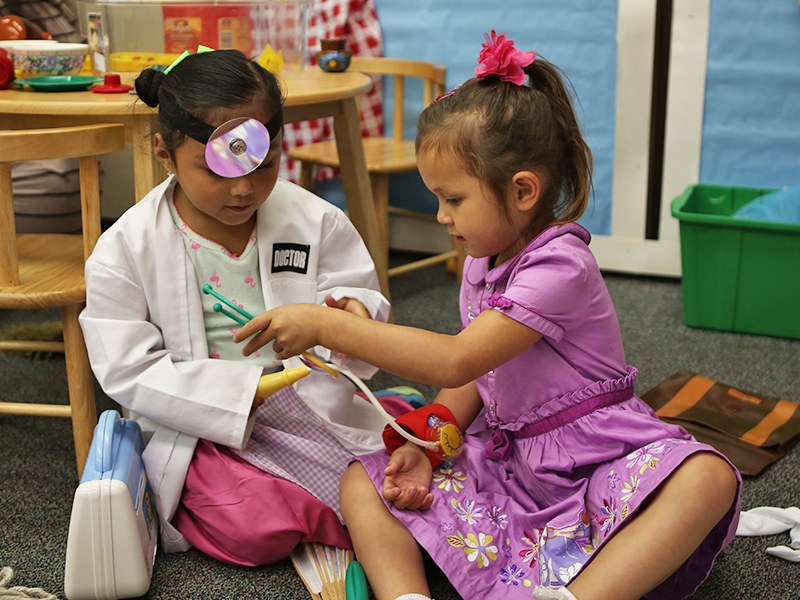 As momentum builds in California to expand early childhood education programs, the state has the opportunity to look outside its borders and learn from other states and cities that have moved in the direction of offering universal preschool.

During his campaign, Governor-elect Gavin Newsom said he was “committed to universal preschool, equipping all of California’s children with the tools to succeed when they start kindergarten.” He also emphasized the need for expanding services to children 0-3 years old.

Advocates are now eagerly awaiting what Newsom will propose when he is sworn in as the state’s chief executive on Jan. 7.

Here are some of the lessons California could learn from efforts in other states that offer high-quality preschool to a large number of 4-year-olds:

Lesson # 1: Emphasize quality even if it slows down implementation

California must ensure that it does not sacrifice quality in a rush to expand preschool programs.

“If you don’t set quality high from the start, thinking you’re just going to roll it out first and then raise quality, the experience is that raising quality doesn’t happen,” said Steven Barnett, senior co-director of the National Institute for Early Education Research (NIEER), a private research institute funded by numerous foundations based at Rutgers University in New Jersey. Each year it issues a report that rates state-subsidized preschool programs in all 50 states.

Some Universal or Expanded Pre-K Programs

The institute measures quality by looking at programs’ curriculum and learning standards, teacher training and classroom size. To meet the benchmarks, a program must require lead teachers to have a bachelor’s degree and additional specialized training in teaching young children, have no more than 20 children in each class and a staff-to-child ratio of 1-to-10 or better.

Those standards might seem like a high bar, but the institute sets them based on research, which shows that high-quality preschool — in Oklahoma, New Jersey and Alabama, for example — helps children do better on reading and math tests. Even in middle school, students in Tulsa, Oklahoma, who attended pre-K were less likely to be retained a grade and more likely to be enrolled in honors classes. In New York City, a study found that the pre-kindergarten program has increased early diagnoses of asthma, vision problems and other health issues.

California has a long way to go to meet many of these standards, but early education administrators in other states say it doesn’t have to be done overnight.

Placing a priority on quality sometimes means programs take a long time to expand. Other states have taken years to roll out their programs. West Virginia’s state Legislature passed a bill in 2002 committing to offering preschool to all 4-year-olds, but phased it in gradually over 10 years. Alabama, which meets all of NIEER’s quality standards, has gradually expanded over 12 years from serving 1.7% of 4-year-olds in 2005-06 to 29% of 4-year-olds in 2017-18.

Part of the reason for the success of the preschool programs in states such as Oklahoma, West Virginia and New Jersey is that the states have provided pathways for existing preschool teachers to get bachelor’s degrees or early childhood credentials.

“If you do that and you promise adequate pay at the end of that, they will be highly motivated,” Barnett said. “This is a job they want to do well. If you give them a path to professionalize, they will take it.”

“I think that’s something we really need to take to heart in California as we work on expansion,” said Samantha Tran of Children Now, a nonprofit organization that advocates for children in the state. “We have about 200,000 caregivers with varying degrees of credentialing and permitting, but we don’t have a strong infrastructure in place that’s coherent and looks at how we are going to build this workforce.”

Many states have had to work with colleges to improve preparation programs for preschool teachers. When the New Jersey Supreme Court ordered the state in 1998 in the landmark Abbott case to offer high-quality programs in school districts with high numbers of low-income students, Barnett said a certification in early childhood education did not even exist in New Jersey. So New Jersey officials had to work with colleges to create the programs.

The state also helped provide substitutes so that teachers could take time off to take the classes necessary to get their new degrees.

West Virginia grandfathered in those teachers who had 2-year-degrees before 2013, then required new teachers after 2013 to have a 4-year-degree.

Alabama officials worked with colleges to make sure early childhood degree programs were offering internships where potential teachers could get hands-on experience with preschool-age children, because previously many students were getting practical experience only in elementary school classrooms.

Ongoing coaching is a crucial part of programs in New York City, Alabama and New Jersey, with “master teachers” or social workers making monthly visits to preschool classrooms to work with teachers to improve their practice.

It’s crucial to incorporate all the different kinds of programs already serving children.

In West Virginia, for example, after the Legislature passed a universal preschool bill, school districts were required to develop their own programs in collaboration with existing Head Start programs, child care centers and state preschools. Each of those programs had their own regulations.

“You couldn’t just develop a program and run everyone else out of town because you already had experts working in the field,” said Janet Bock-Hager, pre-K Coordinator for the West Virginia Office of Early & Elementary Learning. In the end, she said, collaboration among programs has made the state’s preschool program much richer and, in some cases, more efficient. She said some districts have 3-year-olds served by Head Start and 4-year-olds served by universal pre-kindergarten in the same classrooms.

In Alabama, the state offers grants to a wide variety of programs, including Head Start, YMCA, faith-based organizations and private child care centers. To qualify, they have to agree to the state standards.

In some states and cities, the funding for preschools flows mostly through the K-12 system, even when many of the services are provided through private child care centers.

In Oklahoma, preschool teachers are all employees of school districts, even when they work in a private child care center. That ensures they are also paid salaries equal to elementary school teachers.

One of the challenges, especially when preschool classrooms are on an elementary school site, is to make sure they don’t lose the rich play, class size and ratios that are ideal for small children.

Bock-Hager said sometimes the West Virginia early education team has to mentor principals of elementary schools about what a pre-K classroom should look like.

“Worksheets and flash cards are prohibited,” she said. “That seems really basic to early childhood folks, but sometimes principals are like, ‘What do you mean? I expect them to be quiet and sitting,’” referring to preschool children.

Lesson #4: Place an emphasis on research, data and tracking progress from the outset

It’s essential to track what’s working and what isn’t working from the very beginning.

Gathering data has been essential to programs’ ability both to improve and to convince legislatures that programs are working and they should continue to fund them.

When New Jersey began collecting data, Barnett said, it was clear preschool children were making great progress in language and literacy, but not as much in math. He said state officials responded by focusing professional development for the next three years on math and they saw results.

Alabama has researched outcomes from the beginning and managed to get increases in state funding every year.

“I would say the number one way we were able to get the increases in the budget to expand this program is that we had that strong research component so we could say these dollars are getting results,” said Alabama secretary of early education Jeana Ross.

William Gormley, professor of public policy and co-director of the Center for Research on Children in the U.S. at Georgetown University, has spent years researching the effects of Oklahoma’s preschool program on Tulsa students. When he thinks back to when the universal preschool program in Oklahoma began, he remembers some people being concerned that “a universal pre-K program might be wasteful, because some of the resources would be devoted to middle class students who otherwise would probably be able to attend pre-K anyway.”

There are two weaknesses with that argument, Gormley said. First, if a state does not yet have universal preschool, middle-class students may be attending preschool but they may not be attending a high-quality program. Second, he said, research shows that bringing students from a variety of income levels into one classroom has a secondary benefit of helping low-income students.

Still, Gormley emphasizes there are many ways to go about expanding preschool and no one size fits all.

“I think the best solutions are home-grown and they reflect the state’s philosophy and the state’s infrastructure,” said Gormley. “It’s going to be up to Californians to make those logistical and structural decisions.”