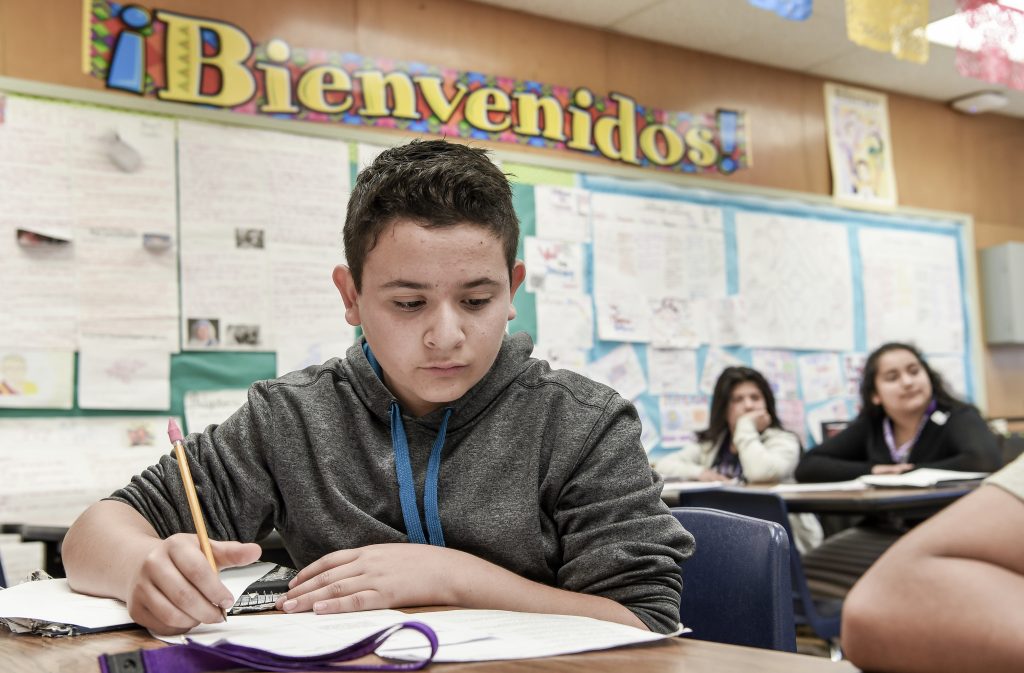 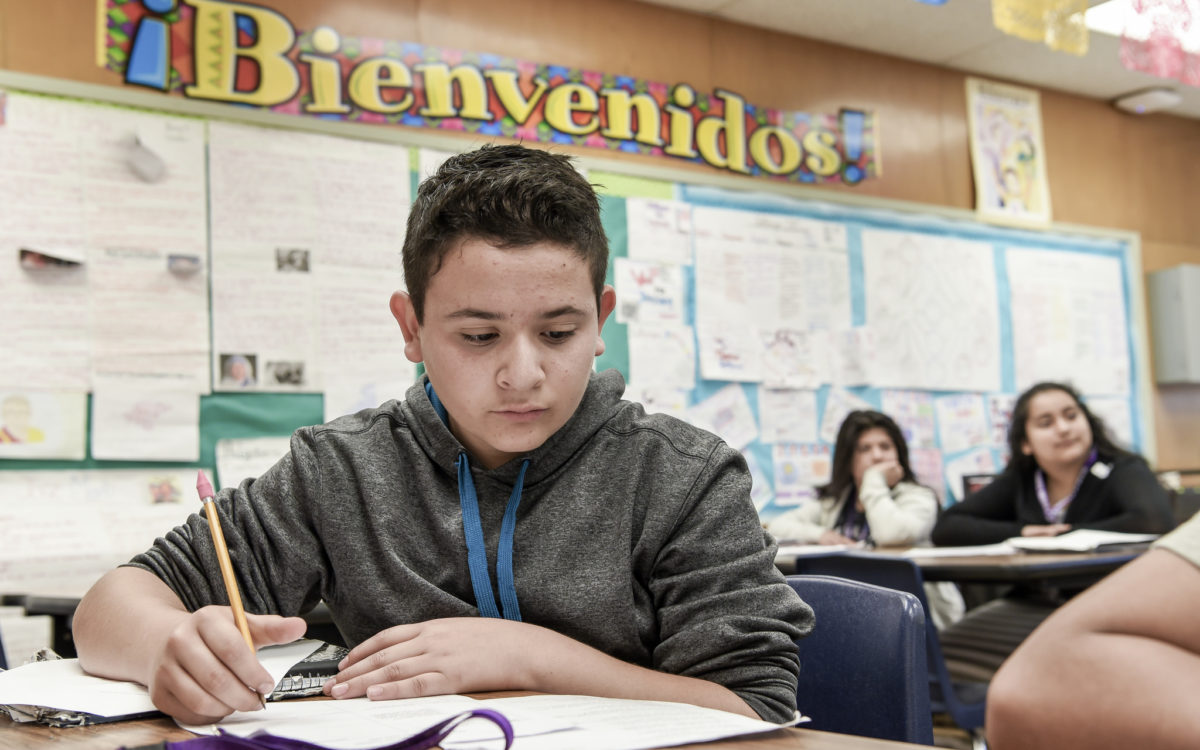 As an initiative approved by California voters last November clears the path for districts to increase opportunities for students to become fluent in more than one language, the Fresno Unified School District is creating an educational track that will provide dual language instruction from preschool through 12th grade.

The goal of the program is for English learners and native English speakers to start mastering two languages earlier in their school careers, and to maintain those skills through classes at every grade level.

Longtime bilingual education advocates say under Proposition 58 — the initiative that repeals the mandate that students learning English must be taught in English — more school districts are likely to add similar programs offering pre-K-12 language instruction for the state’s nearly 1.4 million English learners. English learners are defined as students who do not speak, read or write English and whose first language is not English.

Under the previous law, established when voters passed Proposition 227 in 1998, parents were required to sign a waiver if they wanted to enroll their children in bilingual classes. The new law eliminates that requirement and allows district officials to talk to parents about their options, and to establish a range of bilingual or dual language programs in response to local requests.

While in high demand, dual language immersion programs have typically not been available to students all the way through 12th grade but instead have been offered mainly in the elementary grades, or in some cases through middle school as well.

Maria Maldonado, assistant superintendent of English learner services for the Fresno Unified School District, called Proposition 58 a “game changer.” “This gives us the opportunity to not only inform, but to encourage” students to enroll in the new dual language immersion classes Fresno Unified is offering, Maldonado said.

In a dual language immersion program, also referred to as two-way immersion, students who speak English as their native language are in the same classroom with students for whom English is a second language. The goal for both groups is biliteracy: reading, writing and speaking two languages. There are several types of dual language immersion programs, but in one model used at Fresno Unified, students spend half of their day learning in English from one teacher and the other half learning in a second language, like Spanish, from another teacher. While both teachers are bilingual, one language is exclusively spoken in each dual immersion classroom to encourage students to build vocabulary in that language.

Of the 15,343 English learners in Fresno Unified, 85 percent speak Spanish as their home language. This fall the district is adding three programs — all in Spanish and English — at two elementary schools and one high school. Each of the schools’ programs has varying numbers of classes. The district’s new additions bring the total offered to seven programs, up from four programs offered during the last school year.

Researchers and longtime bilingual teachers have said dual language immersion programs are one of the most effective ways to help students whose native language is not English develop a strong foundation in the language they already speak at home and that the classes help students use those language skills to more successfully learn English and understand other subjects.

Fresno Unified will follow the example of several larger districts, including Los Angeles Unified and San Francisco Unified, that already established what are known as “dual language immersion pathways” from kindergarten to high school. While launching more programs will increase access for all students, it also helps ensure that English learners maintain strong language skills as they advance to higher grades and don’t fall behind in core subjects such as history, science, math and social studies, Maldonado said.

“There is a big gap (between) being fully bilingual and fully understanding the academics,” she said. English learners often struggle academically in core subjects because they don’t have strong enough language skills to fully grasp the material, Maldonado said. Dual language immersion classes teach students two languages and core subjects in those languages. “The dual immersion track allows them to get an understanding of the concepts and the language and helps them to avoid the academic gap,” she said.

It is a process that begins as early as kindergarten when students who are just beginning to speak full sentences in Spanish, for example, also need to develop vocabulary that is more academic, said Leticia Chavez, a dual language teacher at Leavenworth Elementary in Fresno.

Chavez, who has taught in dual language immersion classrooms for 17 years, said the difference in casual Spanish and academic Spanish is evident in the first vocabulary words her kindergartners speak. Chavez said in her classroom she emphasizes interaction between English learners and native English speakers so they develop a strong vocabulary to become successful readers and speakers of both languages.

“Literature is on a different level than the language that is used in the home,” Chavez said. “For example, there are two different words for truck, they say ‘troca’ when it’s called ‘camioneta’ and they say ‘bika’ and I say, ‘no it’s bicicleta.’ I try to find the words that will challenge them to read at a higher level because the books use those words.”

Some parents of English learners are hesitant to enroll in dual language immersion programs because they don’t want to limit their child’s opportunity to learn English and are confident they can “preserve the (home) language by speaking it at home,” Piedra said. However, the goal of a dual language immersion program is not just to preserve one language but to develop skills in two languages by teaching high levels of academic English and Spanish, she said.

“It’s not one language over the other, it is one in service to another,” she said. “It’s not just that students can speak and understand English and Spanish but that they understand it at a high level and are able to read, speak and write in both languages,” Piedra said.

Before the district decided to expand the dual language immersion programs, Piedra said there were not enough spaces for new students to begin these programs in elementary school, specifically in kindergarten. And for some elementary and middle school students in dual language immersion programs, there weren’t enough classes for them to continue through 12th grade. Although high school students can maintain language skills through Fresno’s World Language programs, where typically students focus on learning a language as a second language, those classes are often too easy for them, Piedra said.

“We always felt that our dual immersion program kids were not really challenged and met at the level they came in with because they were mixed in classes with students who were maybe native speakers but not formally educated in Spanish,” Piedra said, referring to high school foreign language classes. Sometimes parents would remark that their child was the “tutor in the class” because the high school classes were not customized to teach students who spent several years in dual language immersion programs and who were more advanced than their peers in reading, writing and speaking academic Spanish, she said.

The new dual language immersion program at the high school level will help students become stronger speakers and writers in two languages, Piedra said. “I’m really excited to see the level our students will be able to attain by continuing to learn Spanish in middle school and high school,” she said.

In the district, there are more applicants for dual language immersion programs than there are spots available. In previous years, some parents have driven across town so their child can have access to one of the few programs in the district. “There hasn’t been a time where we haven’t turned families away,” Piedra said. “And we shouldn’t be doing that, we should have it for anybody that wants it.”