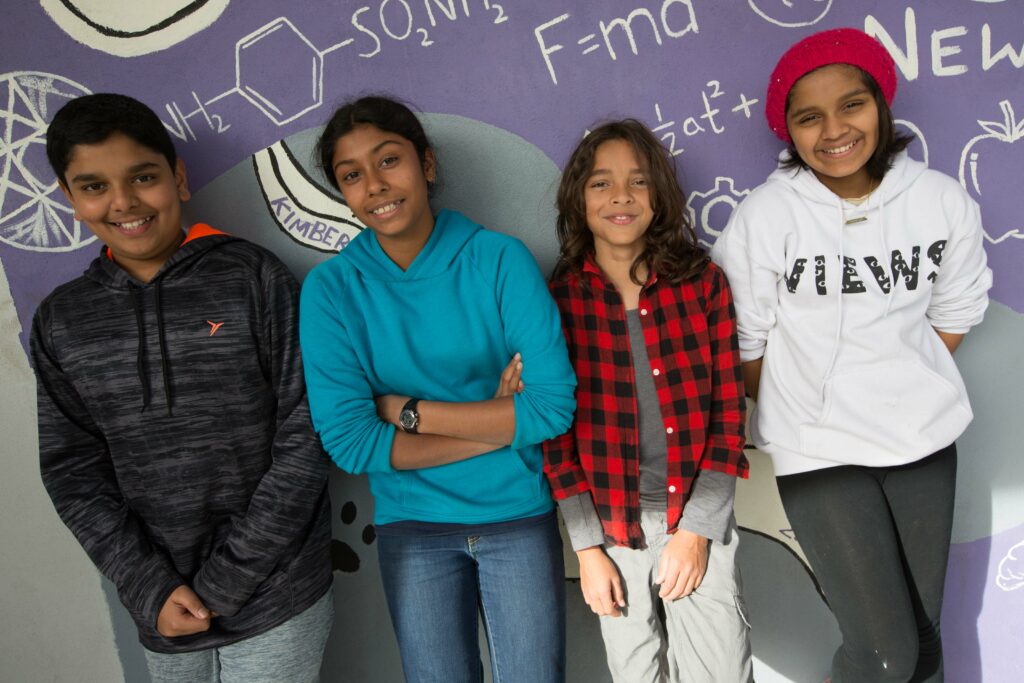 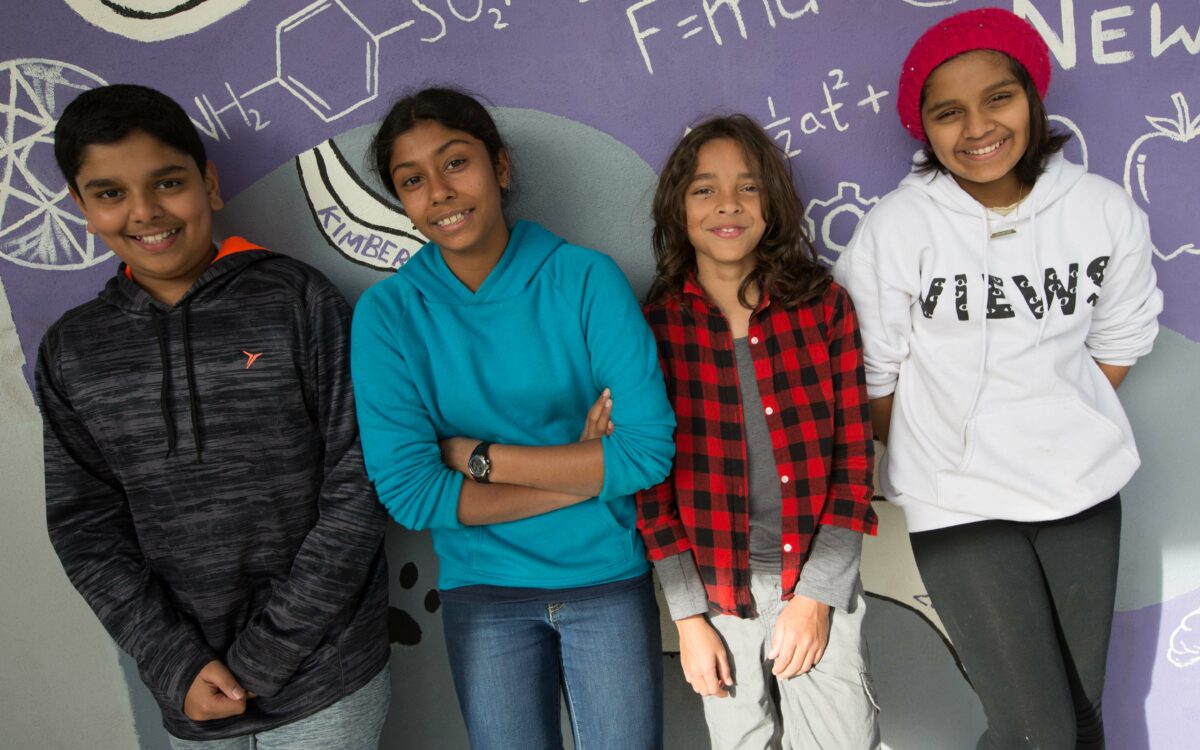 Courtesy of BASIS Silicon Valley/Mitch Aidelbaum
BASIS Independent School of Silicon Valley students stand in front of a science-themed mural designed by high school student Kimberly Hou. The school is one of hundreds around the world participating in an international test of 15-year-olds in math, science and reading.

Courtesy of BASIS Silicon Valley/Mitch Aidelbaum
BASIS Independent School of Silicon Valley students stand in front of a science-themed mural designed by high school student Kimberly Hou. The school is one of hundreds around the world participating in an international test of 15-year-olds in math, science and reading.

In today’s global society, American students may choose to attend universities outside the United States or find themselves competing for jobs with candidates from other countries.

To ensure their students are receiving the education they will need to succeed in a global economy, two California schools joined some 475 schools nationwide to see how their students measure up academically compared with their peers internationally. To do that, they are relying on a little–known test for schools created by the Organization for Economic Cooperation and Development, or OECD.

The test, called the OECD Test for Schools, is based on the much better known Programme for International Student Assessment, or PISA, which is currently mainly used to compare how students from different countries are doing academically.

One of the schools administering the OECD Test for Schools is the BASIS Independent Silicon Valley School, a private school in San Jose. Like many high-performing campuses around the world, it has found that the keys to success include a rigorous curriculum, strong relationships between teachers and students, and a solid support network. Students at the school can choose from a wide variety of courses to pursue their interests, including many post-Advanced Placement classes such as multivariable calculus.

Teacher Matthew Linhares, who holds a master’s degree in Nuclear Engineering from UC Berkeley, tailored the course to his nine students, whom he leads in discussions about complex formulas and the principles behind them.

“What we are doing is taking calculus and reducing it to algebra,” he recently told his class. “Also, we’re going to cover fractional derivatives, just for fun.”

Student Kimberly Hou, 16, said she took the class because she enjoyed Advanced Placement calculus and was eager to dig deeper.

“Basically, you get your mind blown every day and then you realize why it’s blown,” she said. “It’s very logical mind-blowing. It’s fun.”

Hou is one of about 85 students randomly selected at the school last spring to take the OECD Test for Schools in math, reading and science that includes the same kinds of questions that are found on the PISA, given every three years to students throughout the world.

The PISA was also created by the OECD – a group of 35 countries that promotes policies intended to improve the economic and social well-being of people around the globe.

The organization developed the Test for Schools to help schools understand their strengths and weaknesses compared to others internationally, said Richard Li, education policy analyst for the OECD. Schools are also using the test to identify areas for improvement, he added.

The school tests are benchmarked to the 2012 PISA. On a 1,000-point scale in each subject area, students in the Silicon Valley school scored 641 in math, 616 in science and 609 in reading. These scores are higher than those posted by students in Shanghai, China – the highest-scoring country in 2012 – which posted 613, 580 and 570, respectively.

The school’s scores were also significantly higher than average scores for U.S. private and public school students in 2012.

U.S. scores stagnant, other nations pass us by in latest international test

But BASIS Silicon Valley is far from a typical U.S. public or private school. It enrolls about 800 students in grades 5-12, and tuition is $26,000 a year. Many of the students’ parents work in venture capital companies, high tech or medical fields, said Sean Mclain Brown, communications director.

“PISA has become the gold standard for international benchmarks,” said Toby Walker, head of the Silicon Valley school. “We like it because you’re not able to ‘game’ this test by picking up a prep book and studying for it. It requires critical thinking – applying knowledge and reasoning skills. Our curriculum is designed to foster those skills. We look to it to see external validation for our curriculum.”

Since the school test was developed in 2012, nearly 2,000 schools in five countries have participated, Li said.

In the United States, about 475 schools in 32 states and Washington D.C. have given the test since it was developed in 2012, including 31 in California. But since the test transitioned to an online computer-based assessment last year, BASIS Silicon Valley and Granada Hills Charter High in the Los Angeles area were the only two schools in the state that administered it.

About 100 schools nationwide have signed up so far for the 2016-17 online version of the test, which is administered by the Northwest Evaluation Association, or NWEA, and can be given at any time.

“We expect that number to grow,” said NWEA spokeswoman Jean Fleming, “because many paper users are showing great interest in moving online.”

The test costs $6,500 per site – about half the cost of the paper-and-pencil test – and includes a 150-page report that details test and student survey results.

Officials at both BASIS and Granada Hills said they value the student survey results they get from the school test as much as the scores because they help them understand students’ perceptions of their learning environment.

Hou said she values her teachers and the school’s willingness to accommodate students’ ideas and goals. For example, when Hou asked if she could create a mural highlighting science across the ages on campus, administrators gave her the green light after she showed them her design.

The mural now adorns a wall where children play outside and bears the names of Hou and two of her friends who helped paint it.

The surveys ask students about their teachers, curriculum, feelings about their own abilities, motivation and reading habits.

BASIS and Granada Hills have also joined a Global Learning Network that allows test users to meet once a year and share ideas. The network now includes more than 800 campuses around the world.

In addition, the OECD is launching a new pisa4u program next month that will offer free, intensive teacher training and mentoring to any campus, including those that don’t administer the test. Participants will identify challenges and formulate solutions that will be compiled in a database of best practices, Li said.

To help educators around the world understand what it takes to prepare students for 21st century careers, the OECD has partnered with organizations like America Achieves and the Alliance for Excellent Education to showcase some schools that have used the test.

The Global Learning Network profiled the BASIS network of schools, along with two California public schools that took the test between 2012 and 2015, Arroyo Grande High in Lucia Mar Unified near San Luis Obispo and the California Academy of Math and Science in Long Beach Unified. 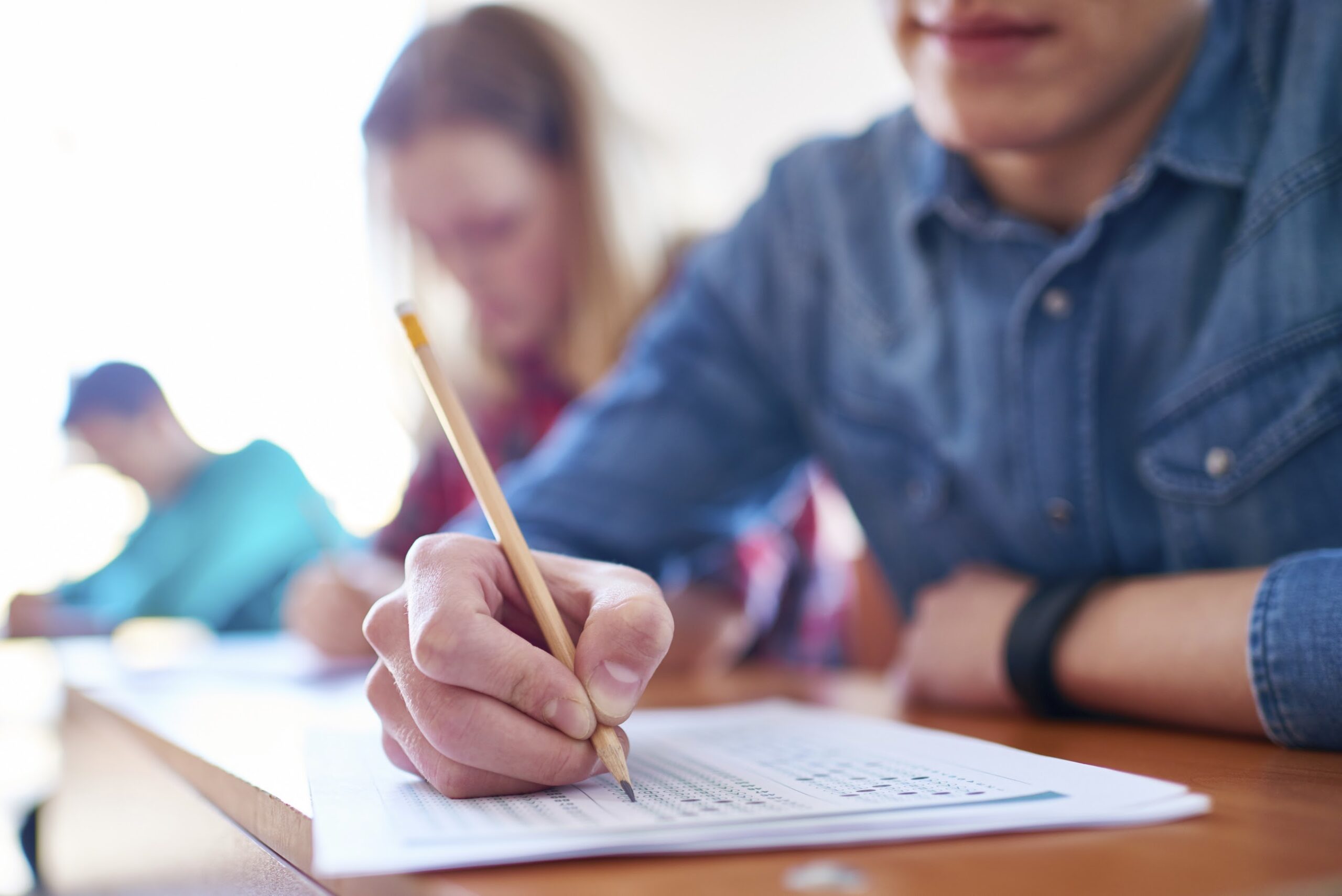 Although PISA has gotten a lot of attention around the globe as a way for countries to compare their academic achievements, critics say comparisons between countries can be problematic because test results may vary due to differences among students and teachers such as socioeconomic status, the value placed on teachers and out-of-school tutoring.

In 2015, the most recent year that PISA was given, Singapore scored the highest in all three subjects on the test, followed by Hong Kong, Shanghai and other parts of China, and several other countries. The United States scored in the middle of the pack, with its average math scores declining to 470, while its science and reading scores remained flat.