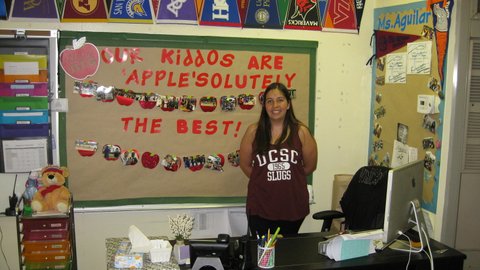 Los Angeles middle school teacher Miriam Gonzalez is among many educators who have been helping undocumented students cope with anxieties about recent news reports that they or their families may be at greater risk of deportation. However, Gonzalez has special insight on those anxieties and strong connections with those students because she — like them — was brought to this country by undocumented parents.

Her need to connect with those students has grown in the wake of the Trump administration’s Sept. 5 announcement that it is phasing out Deferred Action for Childhood Arrivals (DACA), a program that has protected nearly 800,000 foreign-born sons and daughters of undocumented parents from deportation.  That announcement prompted Gonzalez — a DACA recipient — to lead classrooms discussions about immigration issues.

“I want my students to be critical thinkers when it comes to complex immigration issues,” Gonzalez said. “I want students to know our story.”

Gonzalez, in her second year as a Teach for America teacher at Crown Preparatory Academy, a charter middle school in Los Angeles, is one of thousands of teachers nationally who are DACA recipients. DACA, authorized by President Barack Obama in 2012, allowed certain undocumented young people who were brought to this country under the age of 16 to apply for two-year work permits and be protected from deportation during that time. The permits were designed to be renewed indefinitely but did not provide a path to citizenship.

About 20,000 teachers nationwide are DACA-eligible according to a study by the Migration Policy Institute (MPI). The MPI study, conducted on behalf of Univision in 2016, is based on an analysis of an annual census survey that contains data including country of origin, English proficiency and length of residency in the United States. The institute says it uses the term “DACA-eligible” because some of those teachers may have found other ways to obtain work permits.

The 23-year-old Gonzalez is among the teachers, sometimes referred to as “DACAmented,” who are now sharing their status and experiences with the public as well as their students.

Gonzalez’s story in the U.S. began in 2000 when — at the age of 6 — her mother moved her and a younger sister from a farming community in Mexico to Los Angeles. Gonzalez said she did not know that she was undocumented until the 7th grade, when she learned that she did not have a Social Security number.

She was attending a Los Angeles rally on behalf of undocumented residents in 2012 on the day Obama established the DACA program.

Since the program began, 242,339 California residents have applied for DACA status, according to the most recent data recorded by U.S. Citizenship and Immigration Services. Of that total, 222,795 DACA applications have been approved, more than in any other state.

Source: US Citizenship and Immigration Services

With state financial aid made possible by a provision of the 2011 California Dream Act, Gonzalez enrolled at UCLA and worked part-time as a volunteer to help other undocumented students apply for state grants and scholarships.

About midway in her college studies, Gonzalez decided to pursue a teaching career.

“I wanted to give back to my community,” she said. “There’s a need for more teachers of color and I can relate to many students because I also speak Spanish.”

Shortly before her June 2016 college graduation, Gonzalez joined Teach For America  — becoming one of 40 “DACAmented” California teachers involved with the organization.

“She looks like the kids we serve, our kids can see themselves in her and we need to encourage more female students to pursue a STEM profession,” Pack said. “When I learned she had DACA status, that inspired me even more to hire her.”

Pack hired Gonzalez to teach reading and math at Crown, which has a student population that is 85 percent Latino and 14 percent African-American.

Gonzalez has talked openly about her undocumented status since she was in high school. She noted that some Congress members are saying border security should be bolstered in exchange for retaining the DACA program.

“It’s sad that people are being used as a bargaining chip,” she said. “Supporters of DACA should push for a law that makes our protected status permanent. This (phase-out) announcement is putting a lot of stress on people.”

Gonzalez said she has counseled two of her students who disclosed their undocumented status to her well before the current DACA repeal controversy. She believes she has other undocumented students in her classes. But some may not know they are undocumented and others don’t want to discuss the issue, she said.

At Helms Middle School in Richmond, in the east Bay Area, 8th-grade English teacher Dilan Pedraza is also a DACA recipient. On the day the Trump administration announced it was phasing out the program, two of his students confided in him in an after-school conversation that they were undocumented.

“They wanted to know what was going to happen and they asked what they should do,” the 23-year-old Pedraza said. “I told them that no one knows what will happen, but I encouraged them to be hopeful.”

Pedraza’s parents arranged for him to be brought from Mexico to California when he was two months old. His father, a construction worker, moved back to Mexico when Pedraza was 11. After that, he was raised in California by his mother, who cleaned homes for a living. Pedraza, who obtained DACA status at age 20 when he was a junior at Chico State University, grew up in the city where he now teaches.

“I decided to come back and help my community by providing the kind of education that would create opportunities for our children,” he said.

Pedraza said he hopes for reforms that will grant Dreamers like him full legal status in the United States. If that happens, he said he might eventually run for elected office on a social justice platform.

“I’m saddened by the administration’s decision but I also see this as an opportunity,” Padraza said. “This is bringing this issue to light nationwide. Few talked about DACA before this happened. This is the proper time to put pressure on Congress to do the right thing — provide protective legislation for the 11 million undocumented. Many of the Dreamers will have to organize again.”

Simon Tech is one of 28 charter schools managed by the Los Angeles-based Alliance College-Ready Schools. She has been active in an Alliance-wide Immigrant Rights Working Group comprised of educators, students and families. She recently helped organize a fair that provided information on immigrants’ rights.

Morelos, who has been teaching since fall 2015, said two of her students disclosed their undocumented status to her before the announced phase-out of DACA. She also believes she has additional students in that situation.

“I was very sad to hear the news,” said Morelos, who obtained DACA status in 2012. “I think about the students who may not get work authorization.”

Morelos’ family moved from Mexico to Orange County in 1993 when she was 2 years old. Her father is a gardener.

Morelos said her class discussed DACA on the day of the administration’s repeal announcement. The class also read poetry about undocumented people, she said.

“I want to empower my students and help them be more aware of human needs,” Morelos said. “As an undocumented teacher, I bring a different perspective to the classroom.” 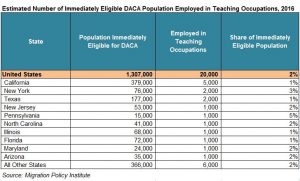