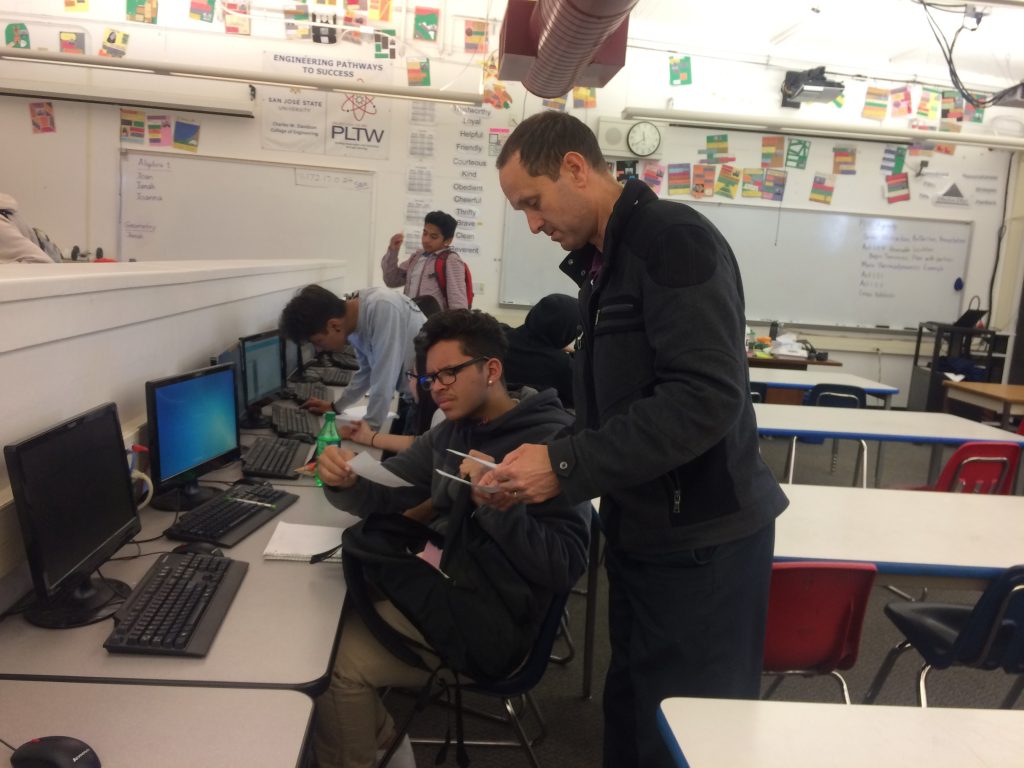 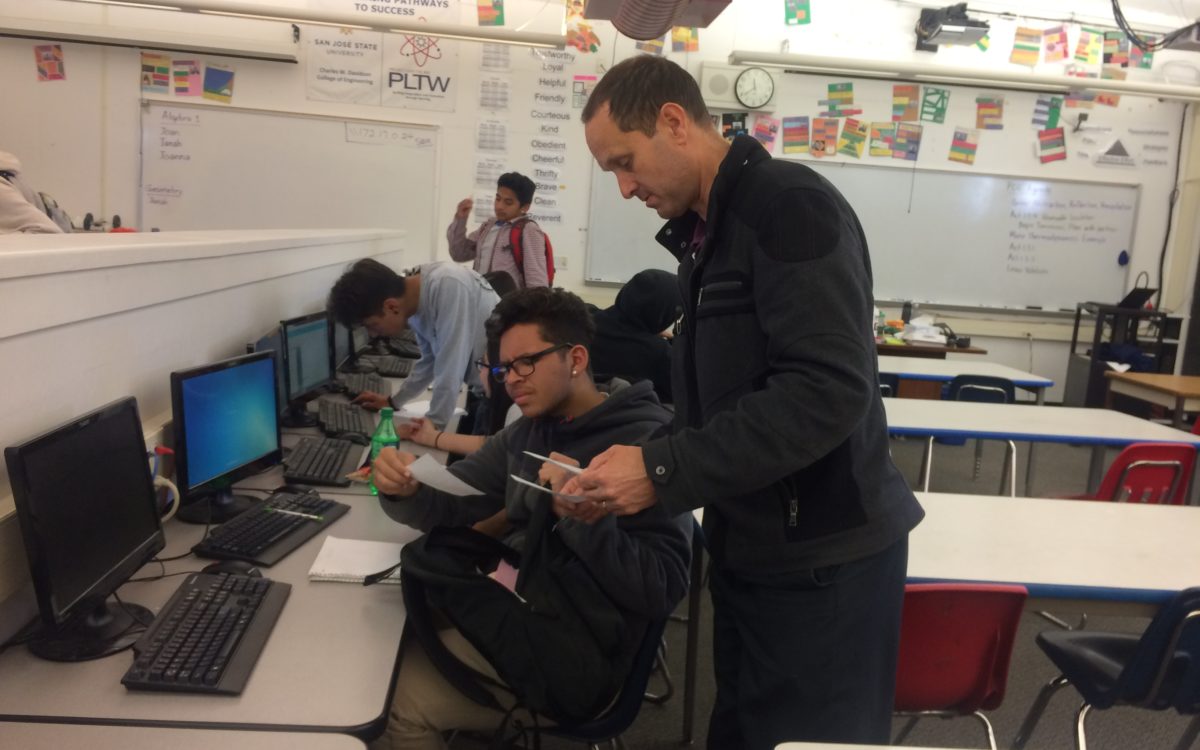 Carolyn Jones/EdSource
Bob Capriles, who was a STEM teaching award, teaches math and engineering at Fremont High in Sunnyvale.

Carolyn Jones/EdSource
Bob Capriles, who was a STEM teaching award, teaches math and engineering at Fremont High in Sunnyvale.

Bob Capriles, a math and engineering teacher at Fremont High in Sunnyvale, gave up a good salary and solid position in a booming industry.

Capriles, 52, worked for more than 20 years as a computer engineer and project manager at Hewlett Packard, Yahoo and other Silicon Valley technology companies. Then, in 2010, when he was laid off from NetSuite after eight months on the job, “I walked out the door and at that moment, I knew I’d never work in tech again.”

Partly that was because he saw the technology sector as notoriously youth-oriented and he feared he’d never be hired again. But mostly it was because he finally felt liberated to pursue his dream of becoming a teacher.

Capriles, a former Eagle Scout and father of three sons, had always loved coaching his kids in after-school sports and volunteering at local schools. With guidance from EnCorps, a nonprofit that helps math, science and engineering professionals become teachers by connecting them with volunteer jobs and teacher training programs, he enrolled in an intern credential program at San Jose State University in June, 2011.  About six months later he  was hired at Fremont High School in Sunnyvale as a math teacher. Capriles didn’t receive his teaching credential for another year and a half, attending classes at San Jose State nights, weekends and summers while working as a full-time teacher.

Once in the classroom, he got help from mentor teachers and had plenty of support from San Jose State, EnCorps and his principal and rarely felt unprepared, he said. He took a pay cut of more than 50 percent when he started teaching, and to make ends meet in pricey Silicon Valley his wife returned to work.

Now he teaches five math and engineering classes a day with a total of 135 students, and in 2014 won a Texas Instruments STEM teacher award. His goal: to train the next generation of Silicon Valley tech workers, who will hopefully bring more diversity and humanity to a field Capriles says is lacking in both.

Workers in the technology industry are predominantly white or Asian and male, according to the U.S. Equal Opportunity Employment Commission, and layoffs are commonplace.

‘My favorite day is Monday

Fremont High, in the heart of Silicon Valley, is a bastion of diversity by comparison: nearly 57 percent of the student body is Latino, Filipino, Pacific Islander or African American. More than 16 percent are English learners and a third are poor.

“These students have the opportunity to change the way technology – and the tech industry – works. They can make it different,” Capriles said. “I want to see kids who are under-represented in engineering become engineers. Here, we find them, we get them excited about math and engineering, and we let them fly.”

Sophomore Rohan Rodrigues, who’s in an extra-curricular programming club that Capriles oversees, said he wants to be a computer engineer in part because of Capriles. He was among a dozen or so students who’d gathered in Capriles’ classroom at lunchtime to tinker with computers.

“He’s good at explaining the information. He has us do activities independently – I just like his teaching style,” Rohan said. “He brings his engineering background, which is really helpful.”

Despite the steep pay cut and lack of perks compared to a big tech company, Capriles said he has no regrets.

“I don’t know if I’ll ever be able to retire, but I don’t care. This is my retirement job, and I hope to do it the rest of my life,” he said. “I leap out of bed every morning to come to work. My favorite day of the week is Monday. And trust me, I never ever felt that way in tech. Never. Ever.”