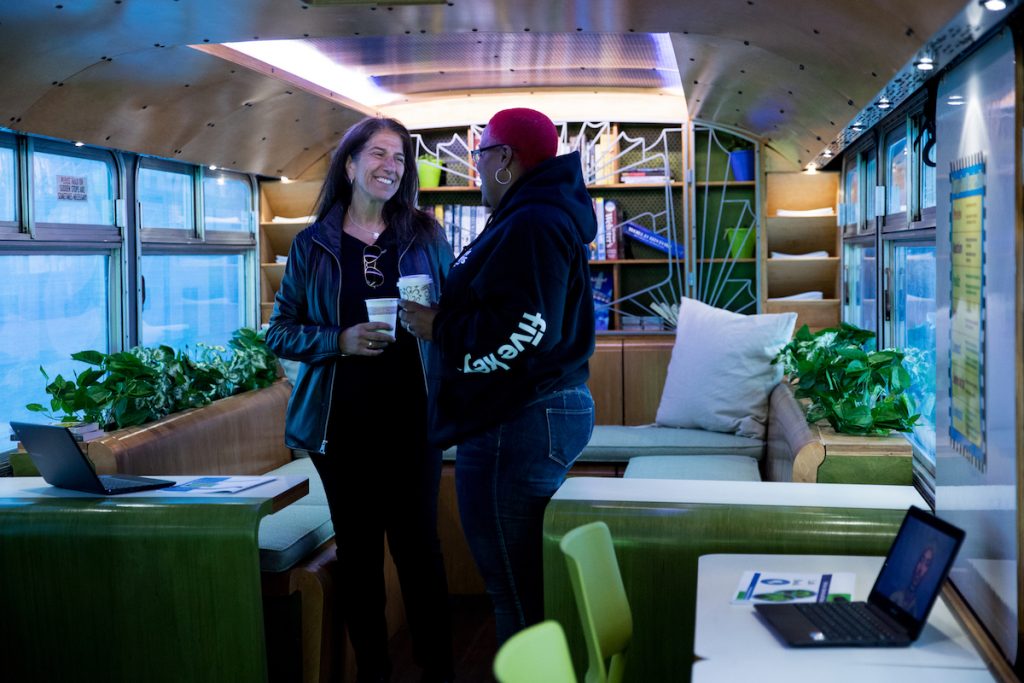 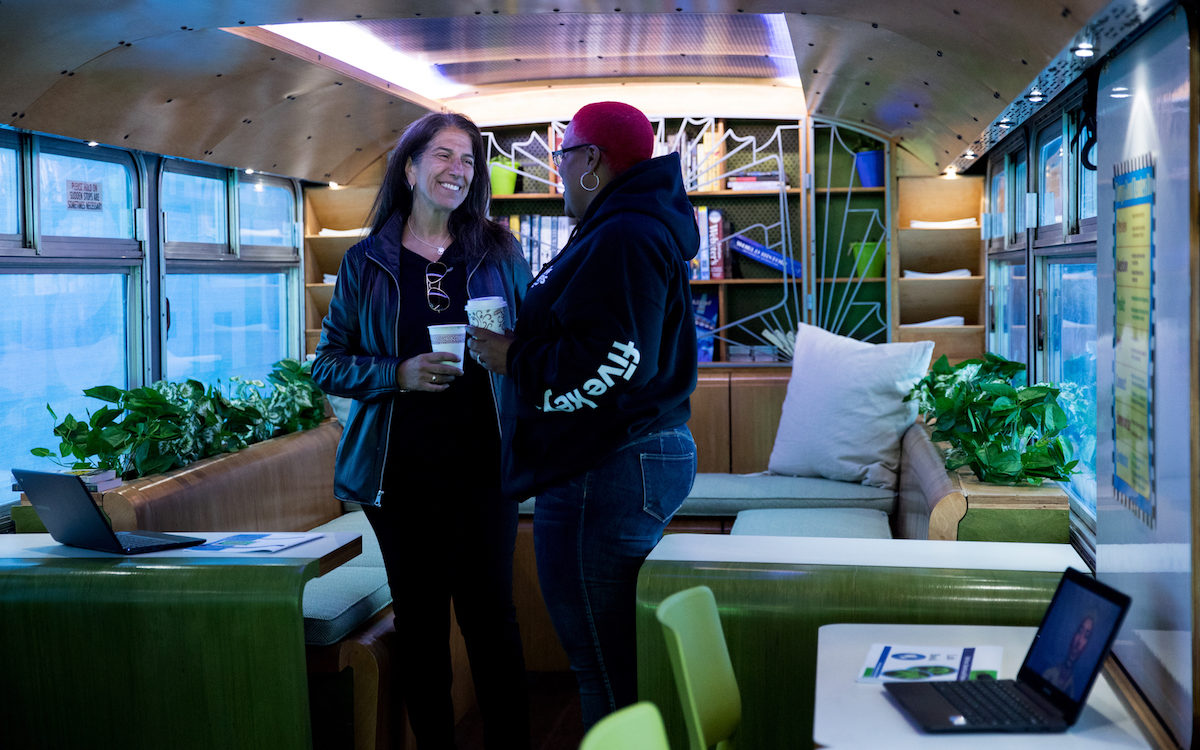 Tiaira Breaux spent much of her childhood in foster care, served time in the juvenile justice system and had to fight for sole custody of her three sons. But nothing, she said, nothing was tougher than learning high school algebra.

“I could not do it. My mind could just not process it. I was so irritated, I tried to quit,” said the 26-year-old Oakland resident. “Learning how to graph slopes was the hardest thing I’ve ever done in my life.”

With the help of her teachers at the Five Keys Charter School, Breaux eventually mastered algebra and earned her high school equivalency degree. In September, she’s headed to the Academy of Art University in San Francisco with hopes of becoming a photography teacher.

She credits Five Keys with changing the course of her life.

“I was a broken person,” she said. “I had no confidence. If it wasn’t for Five Keys, I’d probably be crying somewhere, clubbing, getting drunk, I don’t know what. I wouldn’t be the confident woman I am now. They stuck by me. They were always in my corner.”

Five Keys is a San Francisco-based charter organization that helps students earn their high school diplomas or pass the general education development (GED) exam, after they’ve dropped out of traditional high schools. Many of the students are incarcerated or formerly incarcerated.

This month, Five Keys is adding a new feature to its network of 70 classrooms in the Bay Area and Los Angeles: a mobile classroom in San Francisco, intended to serve students who can’t make it to regular classrooms because they can’t afford the transportation costs or, in some cases, fear crossing into enemy gang territory.

The Five Keys mobile classroom is a refurbished bus from San Francisco’s Municipal Railway transit system that has been outfitted with laptops, desks, chairs and sofas, a small library, wi-fi and posters of the periodic table of elements and genres of literature. It can accommodate 15 students at a time, and will make four stops a week in neighborhoods with higher-than-average crime and poverty rates, such as Bayview-Hunter’s Point and the Sunnydale public housing project.

The mobile classroom was funded mostly through a $100,000 Google Impact Challenge grant. Google awards 25 such grants annually, based in part on a public voting process, to Bay Area nonprofits that demonstrate a strong positive impact on life in the Bay Area.

“The need is there,” he said. “With this bus, we can take education directly to our hardest-hit communities. Our hope is that it will be filled with students every place it goes.”

Five Keys was founded in 2003 through the San Francisco Sheriff’s Department to educate inmates in the county jail. In 2007 the nonprofit expanded beyond the jail to educate anyone in the community who wanted to earn their high school diploma or pass the equivalency test. It later expanded beyond San Francisco, offering classes throughout the Bay Area and Los Angeles.

Working closely with other nonprofits and government agencies, such as probation and social services, Five Keys provides classrooms and teachers in housing projects, community centers, churches, homeless shelters, the YMCA and other sites. Students can enroll at any time, typically attending class for a few hours once or twice a week and completing independent-study packets on their own.

The standards match the state’s requirements for traditional high schools, and the school is fully accredited. But teachers have tweaked the curriculum to be more appealing to its student population — adults who’ve felt disconnected from traditional schools. For example, for students who need remedial reading material the teachers use books written in simple language for an older audience, instead of Dr. Seuss or easy-reader books. For a lesson in world history, civics and economics, teachers might focus on immigration. A topic for an English essay might be how different countries use restorative justice.

At First Place for Youth, an Oakland-based nonprofit that helps California foster youth find jobs and housing and enroll in school, Five Keys has helped 20 young people earn their high school diplomas or the equivalent since it opened classrooms at its Oakland and Los Angeles facilities two years ago, said education director Erica Stowers.

Some of the graduates have gone on to community college, gotten higher-paying jobs, earned nursing certificates or otherwise advanced their careers, she said.

“These students sometimes haven’t done well in traditional schools. But Five Keys creates an atmosphere where the kids can learn at their own pace, with lots of support, removing barriers they might face otherwise,” Stowers said. “They really go above and beyond.”

Enrollment in Five Keys is voluntary, although some students attend as a requirement of probation or public assistance and Five Keys offers incentives such as pizza, Starbucks cards, bus tokens and free backpacks. About 3,000 students are enrolled statewide, with 2,400 actively attending classes, Good said. Since 2003, about 2,000 students have graduated.

But the real success stories might be graduates like Breaux, who said the school provided her more than just a high school degree.

“The teachers stuck with me and really cared,” she said. “I’d never had that before. I’d text my teacher at 10 p.m. and ask for help with a math problem, and she got right back to me and stayed with me until I got it. The teachers never gave up on me, even though I’m sure I drove them crazy.”

Breaux began getting into trouble when she was a kid growing up in Stockton, and stopped attending school almost entirely after 8th grade. She had been arrested several times for fighting and shoplifting. By age 23, she had three sons but had to fight for sole custody of them after she and her husband divorced.

At age 23, once she had relocated to Oakland, her mother encouraged her to try Five Keys.

“My goal was to show my kids that no matter what your circumstances are, you can always try again,” she said. “Never give up.”

After three attempts, she finally passed the GED in January, 2016. She got a job at an Oakland-based environmental group, Clean Water Action, and won a scholarship to art college.

“At Five Keys, we all came from different backgrounds but left it at the door when we got to the classroom,” she said. “We were all friends, supporting each other. Your hardships, your heartaches, they were always there for you. It really is like a family.”

Leave a Reply to Regina Lane