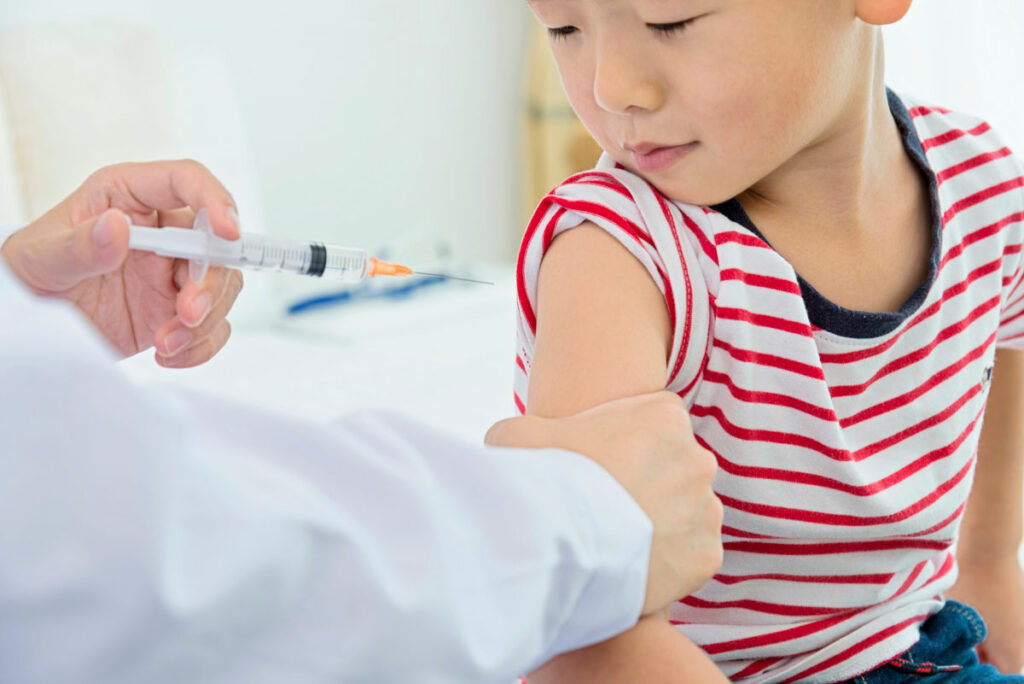 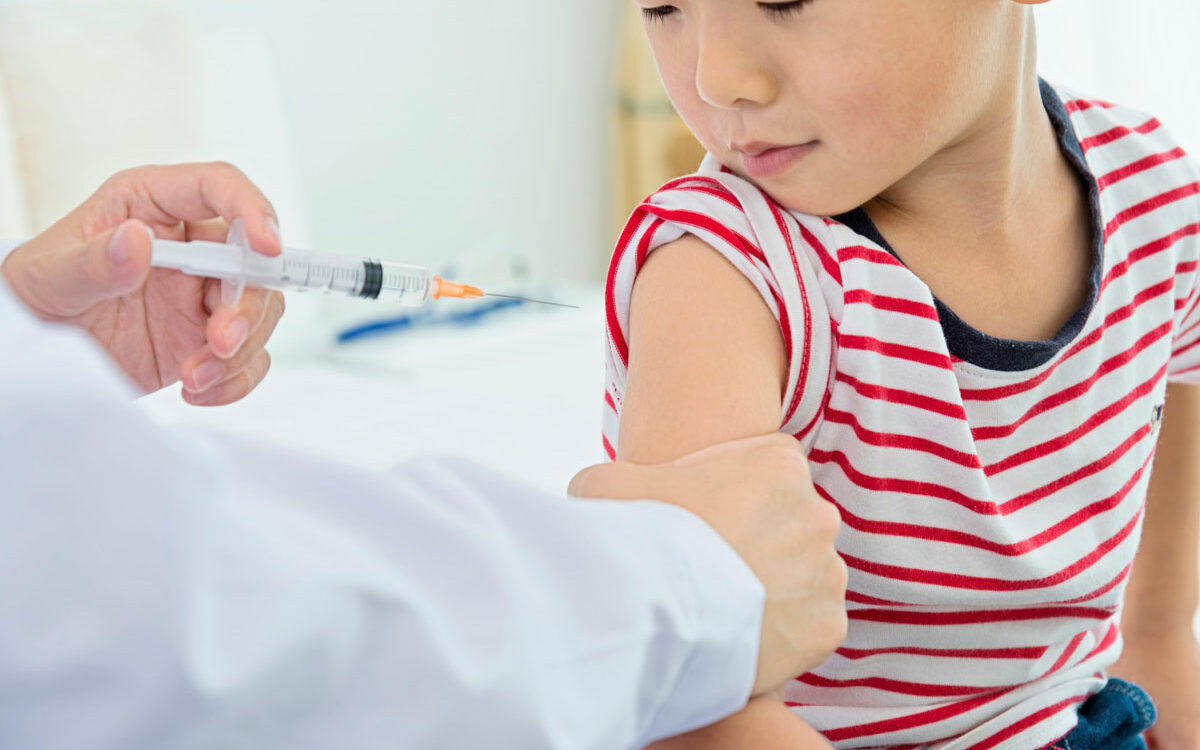 Partly proud, partly mortified, Principal José Macias of the Sixty-First Street Elementary School in Los Angeles said that yes, it was true – his school had reported the biggest increase in the rate of fully vaccinated kindergarten students in the state. The number of kindergartners who met all vaccination requirements this year jumped by 82 percentage points at the school, according to data released this week.

Parents at Sixty-First Street Elementary support vaccinations for their children, Macias said, but follow-up is sketchy. That’s how the school ended up in 2015-16 with just 12 percent of its kindergartners up-to-date for all vaccinations. The remaining kindergartners – 88 percent of them – were admitted “conditionally” in 2015-16, meaning they had some but not all of the 10 immunizations required by the state, and promised to complete the rest. In 2016-17, the up-to-date vaccination rate for kindergartners at Sixty-First Street Elementary climbed to nearly 95 percent.

While Macias’ school reported the most dramatic upturn, new data from the California Department of Public Health show for the first time how individual schools contributed to a statewide increase in kindergarten vaccination rates to 95.6 percent.

The new vaccination law, Senate Bill 277, took effect at the start of this school year, eliminating the ability of a parent to obtain a “personal belief exemption” to opt out of vaccinating their children attending public and private schools. But the removal of the personal belief exemption doesn’t account for the overall rise in vaccination rates, according to a summary report from the California Department of Public Health. Instead, schools and parents started to take immunization far more seriously, health officials say.

International publicity about the Disneyland measles outbreak of 2014-15 brought the risk of contracting measles, which had been declared eradicated in the United States in 2000, back as a public health threat. As Senate Bill 277, authored by Sen. Richard Pan, D-Sacramento, wound its way through the Capitol, news reports highlighted testimony from parents who vowed never to vaccinate their children and testimony from parents who had seen the ravages of polio. A 6-year-old Marin County boy with leukemia, Rhett Krawitt, became the public face of the debate.

And state finance auditors announced they would be looking more closely at schools with high rates of kindergartners who were not fully immunized – who were “conditionally” enrolled – to evaluate whether these students were properly enrolled and legitimately eligible for state per-pupil funding, according to the California Department of Public Health summary report. Students who are not fully vaccinated run the risk of not being allowed to attend school.

When the law passed in 2015, staff at many schools launched a full court press to get every eligible incoming kindergartner vaccinated. Collecting immunization paperwork from parents rose to the top of the to-do list. Kimberly Wright, principal of Los Angeles’ Cienega Elementary School, said she made immunizations a permanent agenda item for her meetings with office staff. At the front counter, conversations with parents about vaccinations shifted in tone from a low-key reminder – “well, when you can do it,” Wright said, to “this is really important.” Staff made reminder calls to parents, and Wright kept a list of those with incomplete immunizations on her desk. Vaccination rates at Cienega Elementary rose from 15 percent in 2015-16 to nearly 88 percent up-to-date in 2016-17.

“The vocabulary of the personal belief exemption seemed to imply it was a personal choice with only personal implications, when actually the effect on a community could be profound,” said Matt Willis, public health officer for Marin County.

Matt Willis, public health officer for Marin County, which had some of the highest rates of personal belief exemptions in the state, said that the debate about vaccinations shifted in Marin in part because of Rhett and his story. Chemotherapy had compromised Rhett’s immune system, making him unable to be vaccinated against certain diseases, and leaving him at risk for catching a disease from unvaccinated classmates. He stood on a wooden chair at a March 2015 meeting of the Marin County Board of Supervisors and urged supervisors to support Senate Bill 277 “so kids like me don’t get sick at school.”

“One key was reframing vaccinations entirely as a matter of community responsibility,” Willis said. “The vocabulary of the personal belief exemption seemed to imply it was a personal choice with only personal implications, when actually the effect on a community could be profound.”

In addition, Willis surveyed Marin parents in 2013 about their beliefs about vaccinations, and found that most were choosing to vaccinate their children against some but not all of the 10 diseases. “We weren’t necessarily dealing with a community that was frankly against vaccinations,” Willis said. “That offered hope.”

At Reed Elementary School, Rhett’s school, the percentage of kindergarten students who are up-to-date with vaccinations went from 92.5 percent in 2015-16 to 97 percent in 2016-17. “It was the education of the community,” said Nancy Lynch, superintendent of Reed Union School District in Marin County. “People stepped up.”

Vaccination rates remained low, unsurprisingly, at schools that offer independent study programs or oversee home-schooled students. Students in those programs are not required to be vaccinated, nor are students who receive special education services. Aside from those types of schools, Walnut Avenue Elementary School in Chino Valley Unified had one of the lowest rates of immunizations, with 33 percent of kindergarten students up-to-date on vaccinations in 2016-17. Sixty-seven percent were overdue for vaccinations, meaning they were late getting a scheduled vaccination. According to the California Department of Education, children overdue for one or more required immunizations are subject to exclusion from school until they meet the  requirements.

Brenda Dunkle, a spokeswoman for Chino Valley Unified, said the district could not comment on vaccination rates because its director of health services is out of the office until early May.

In Orange County, Pamela Kahn, coordinator of health and wellness at the Orange County Department of Education, said that education about immunizations unfolded with every news cycle in 2015 as dozens of children and adults, most of whom were unvaccinated, contracted measles after visiting two Disney theme parks in Anaheim.

“No. 1 was the Disneyland measles outbreak,” she said. “This brought people’s attention to the fact that this does still happen.”

An exodus of students from schools to home schools to avoid vaccinations didn’t occur, Kahn said. “We knew there would be some,” she said, and there were.

Along with the statewide increase in the vaccination rate, the rate of medical exemptions also rose, from 0.2 percent to 0.5 percent. A medical exemption requires a letter from a doctor stating the health reasons why a child cannot be vaccinated against certain diseases; there is no official form.

“From a medical point of view, there are some letters that are kind of suspicious,” Kahn said. “For example, we get the same exemption letter, with the same language, for different kids, from the same doctor. It could be ‘a familial history of reactions to immunization.’ That could be a cousin, a third cousin. One person wrote that this child was exempt until a date that correlates to high school graduation. That’s odd.”

But the schools don’t question the exemption letters, she said. “We were advised that we are not the medical experts,” she said.

“I think people are still looking for avenues not to be vaccinated,” said Dr. Kenneth Cutler, public health officer for Nevada County, which also has had pockets of unvaccinated students. Kindergarten vaccination rates for the county reached 81 percent, up from 69 percent about five years ago, he said.

But Sharyn Turner, school health services coordinator at the office of the Nevada County Superintendent of Schools, said she did see signs of change in what has been a strong anti-vaccination culture at some schools. In those schools, she said, parents who opposed vaccinations shunned some pro-vaccination parents. But Turner’s vaccinated grandson now attends School of the Arts, which has a history of being popular with vaccine opponents, and she said the family has been welcomed. “You are no longer excluded because you vaccinate your child,” she said.

Others remain outliers in the vaccination landscape.

At the Mountain Oaks School in Calaveras County, where all students are in independent study or home-school programs, supplemented by on-site classes for those who are vaccinated, 39 percent of kindergartners were up-to-date on vaccinations. Fifty-seven percent did not have to be immunized because they are not receiving classroom instruction or they are receiving special education services. An additional 4.5 percent had a medical exemption.

“Despite that, the percentage of parents who don’t care that their kids can’t take classes at school is really high,” Colman said.

Unvaccinated students had to stay home from a recent outdoor adventure school trip, she said. “We’re trying very hard to err on the side of caution,” she said. “I do not want to be the administrator on the 11 o’clock news – ‘Plague outbreak after unvaccinated kids are let in.'”

“Our parents are nothing if they’re not rebels, and they have been for a gazillion years,” she said.

At Sixty-First Street Elementary, planning for next year’s kindergarten immunization checks is well underway. At school drop-off in the morning, Macias sticks his head into parents’ cars and tells them he wants their younger children as kindergartners next year, but they need to be vaccinated. School staff photocopy flyers with the locations of health care clinics, translate forms into Spanish, and offer, time and again, to help parents get the job done.

“The only thing we haven’t done is bring the doctor here,” Macias said.