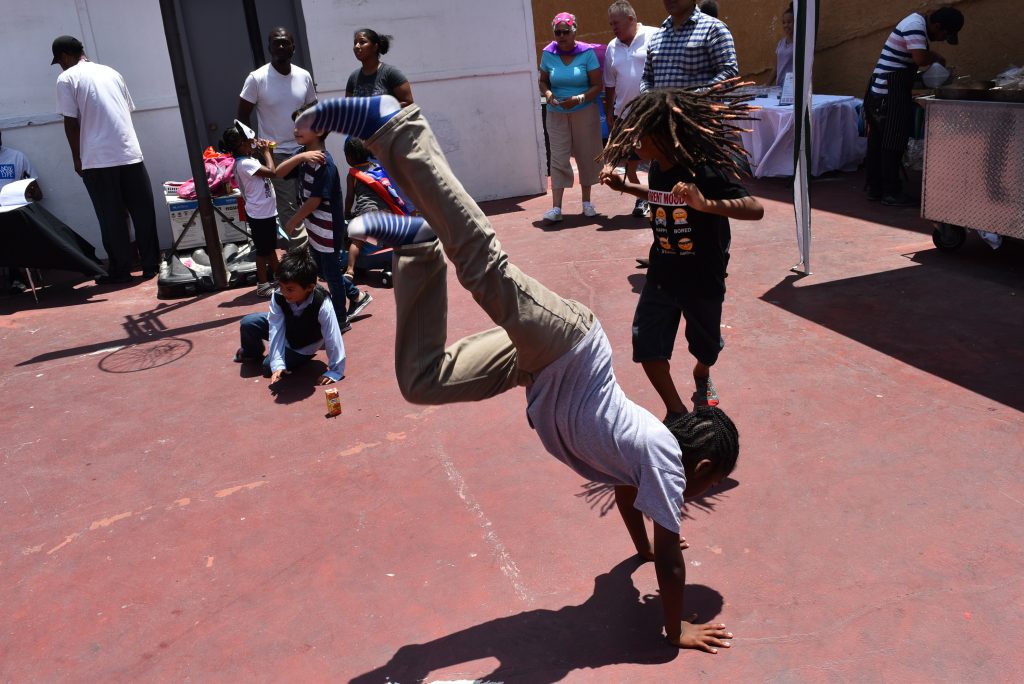 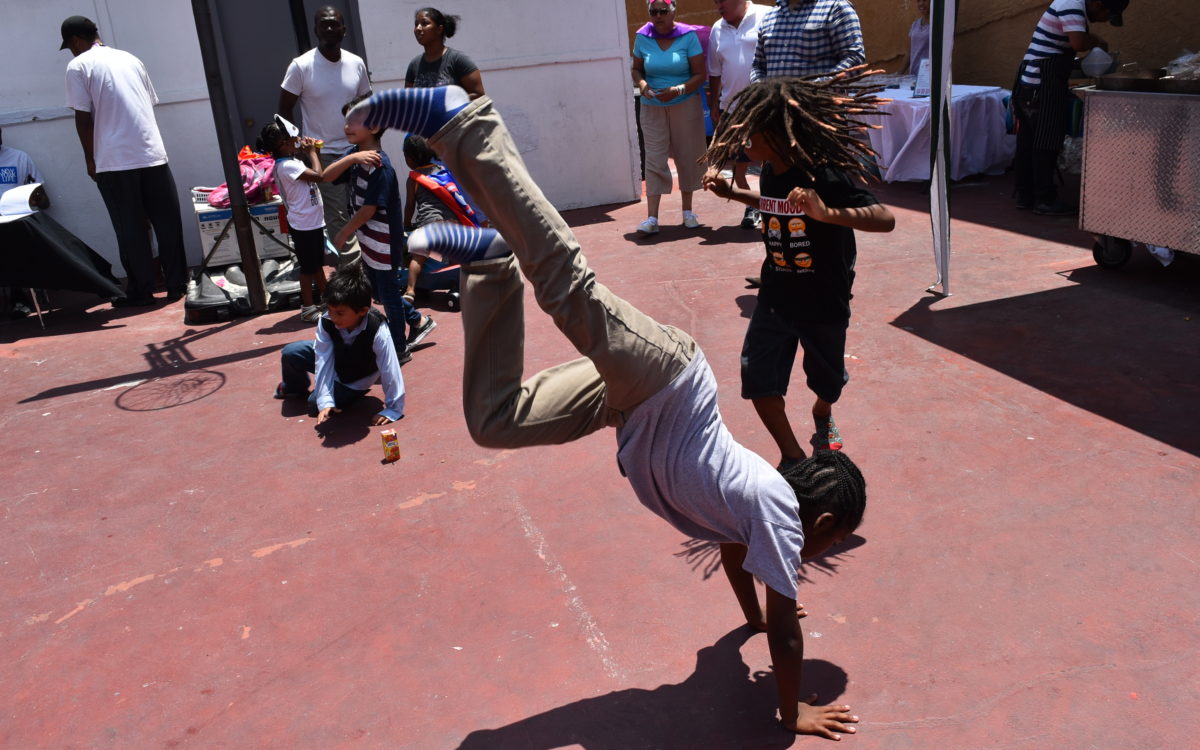 As a college freshman, Hattie Mitchell visited L.A.’s notorious Skid Row neighborhood as part of a choir group and spotted a six-month old baby on the ground surrounded by trash and signs of prostitution and drug use.

“And I just thought…this little girl has no idea…she may aspire to be something and the chances of that happening are slim to none just given her circumstances.”

Mitchell soon found her life’s work: “The changing factor in my life was education, what will change her trajectory? Education.”

Thirteen years later, with a doctorate in educational leadership from USC in hand, Mitchell on Monday will officially open a charter school she founded that seeks to help homeless families.

It’s one of nine new independent charters opening within Los Angeles Unified School District this year, and the only one dedicated to fighting homelessness with an arsenal of social services to assist families ease into the workforce and away from the streets.

The school, called Crete Academy near South L.A.’s Leimert Park neighborhood, has enrolled 140 students in grades transitional-kindergarten to 6th. Officials won’t know until after Crete opens how many students meet the state’s definition of homeless — which ranges from living in shelters, temporary housing, motels, parks, cars or sharing housing with friends or relatives.

Mitchell estimates that among the 140 enrolled students, 10 percent are or have experienced homelessness. She expects that nearly all students will qualify for free-and-reduced price meals — based on parent surveys and rates at nearby schools.

While the school can just put a dent in L.A.’s homeless crisis — where even working adults are finding it impossible to find affordable housing — if it succeeds it could become a model for other districts to aid students and their families.

Crete is serving some of the poorest communities in Los Angeles, and its location in South L.A is strategic. According to a 2015 analysis in Crete’s charter application conducted by the nonprofit research group The Economic Roundtable, the nearby zip code of 90044 was home to more than 7,000 children in 2010 who had experienced homelessness at some point in their lives — about a third of the zip code’s child population. Mitchell said a majority of the students enrolled at Crete live in 90044.

“The housing scarcity is not only real in general, it’s very real for families,” said Mitchell.

“We want to keep families together as much as we can. To do that we have to provide services not just at the school for the kids, but services that extend beyond the school day to our parents and our families.”

Key to Crete’s whole-family strategy is the set of social-service partnerships Mitchell and her team have spent the past 18 months establishing. The school will have a wellness director and three AmeriCorps staffers who will connect students and families to health, housing and other care.

Crete is partnering with the L.A. County-funded social-services hotline 211 to conduct initial reviews of the services for which each family is eligible. Those reviews will occur during the families’ meetings with Crete’s wellness team in the first month of school. Crete’s wellness director will use the information to plot an individual action plan and check in regularly on families to see how they’re faring.

For families in need of housing, Mitchell said that the school is partnering with several landlords who specialize in low-income housing, including developer Thomas Safran & Associates. So that families requiring housing can afford it, Crete’s wellness team will assist them in securing government vouchers for subsidized housing known as Section 8. The idea is to have the partnering landlords settle them in stable homes — expediting the typical process for families who otherwise may have to wait years for an affordable apartment. In the meantime, Crete staff will work to place those with nowhere to go in temporary housing, like at Union Rescue Mission — the county’s largest with more than 1,300 beds and where most of the occupants come from South L.A. The hotline 211 will also assist in pointing families toward short-term housing options.

“Hattie’s incredibly smart and her mission is inspirational,” said Andrew David Gross, president at Thomas Safran & Associates, in an interview. “And we look forward to working with her.” 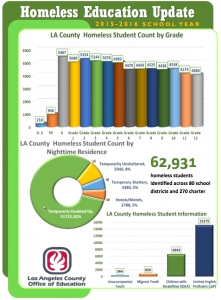 According to 2015-2016 data from the Los Angeles County Office of Education, there were 62,931 homeless students across 80 districts and 270 charter schools in the county — including about 11,500 in L.A. Unified. The county office counts anyone ages 0-22 who took part in the school system to be a student. Nor is youth homelessness defined as living just on the streets. While 8 percent of the nearly 63,000 homeless students were unsheltered and 10 percent lived in temporary housing or motels, 82 percent lived with other families. Given the numbers, many schools in the county enroll students with housing insecurities.

To address the health needs of students, Crete is pairing with UMMA Community Clinic to provide families with Medi‐Cal enrollment, medical exams and referrals for dental and mental health support. USC’s school of dentistry is another partner. Medical staff from the school will come onto the Crete campus to provide students and interested family members screenings. Crete employees will then help book dental appointments for students and parents in need of care. By connecting students and their parents or guardians with government insurance plans for low-income residents, Crete’s plan is to steer families toward services that cost them little or nothing at all.

Crete is also about to sign agreements with USC and Cal State University Dominguez Hills to secure the services of a few graduate students studying to become social workers. Overseen by a licensed clinical social worker, the graduate students will offer mental and emotional support to Crete students, and will start in a few weeks, Mitchell said.

Because many students and their families cannot pay for transportation, Mitchell said Crete purchased two 15-seat vans that will make multiple runs each morning to pick up the roughly 50 students who would otherwise be unable to get to school.

Los Angeles City Councilmember Marqueece Harris-Dawson, whose district includes Crete, said the school’s emphasis on homeless youth “makes sure that all of our kids can have an opportunity to live up to their fullest potential.”

As a charter, Crete has received $575,000 in federal charter school start-up grants, various private donations and the standard state allotment for charter schools that’s based on the school’s enrollment.

Beyond the social supports, Crete’s curriculum includes life skills such as patience and mindfulness. Through an instructional program called ThinkLaw, students will discover learning strategies used by lawyers, such as quizzing themselves to gauge how much they actually know, considering alternative endings to stories and thinking about the sequence of events in their lesson plans. In addition to core subjects like math, English and science, students will attend rotating classes on horticulture, Mandarin and culinary arts during school hours, and have the option of taking those electives after school, too.

Though Crete is officially opening next week, it has already generated buzz. While the school’s original charter petition to the district proposed grades transitional-kindergarten to second, community demand led approval to enroll through the 6th grade and enroll 140 students instead of the original 111 students.

One of those students will be Mitchell’s own son. She and her husband moved out of the affluent city of Pasadena and into Inglewood this spring to live closer to the school.