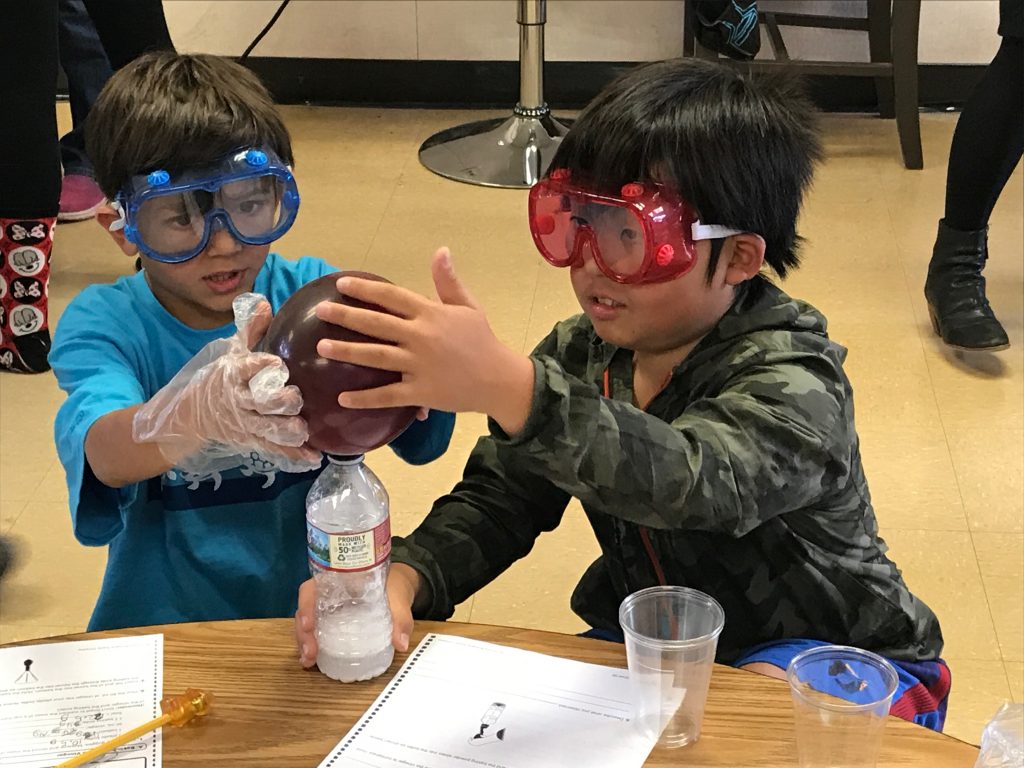 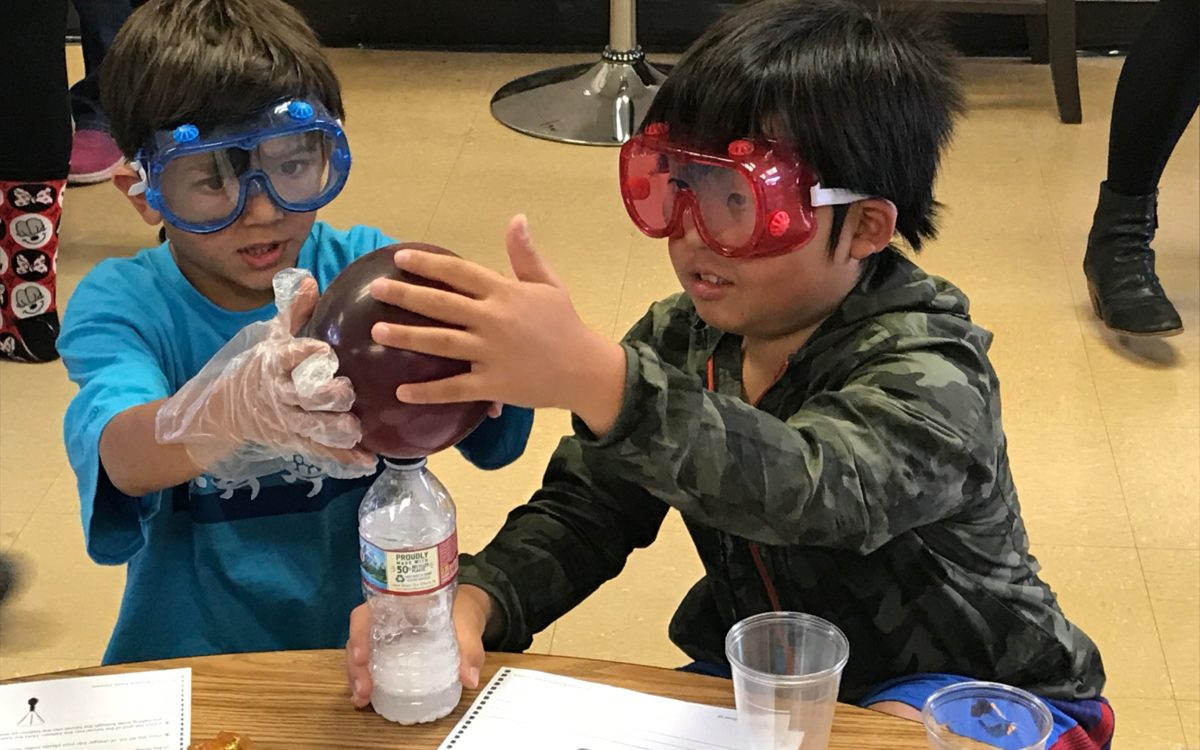 As schools nationwide take on the most comprehensive overhaul of science standards in 20 years, a school district in a quiet suburb of Los Angeles has become a pace-setter.  Without relying on outside funding, or major grant money, Torrance Unified has trained more than 500 teachers and has unveiled the new standards to all 24,000 students in the district.

By devoting thousands of hours to teacher training, the district has shown teachers from kindergarten through 12th grade how to explain a scientific phenomenon in a new way to their students — by letting the students discover the answers on their own, instead of memorizing facts from a textbook.

“We feel science is the center of a good education, so this has been a priority for us from the beginning. But there are fundamental things we’ve done that all districts can do,” said Amy Argento, one of three classroom science teachers the district assigned to train their colleagues. “What we’ve done is replicable anywhere. Any district can do this.”

Torrance is an ethnically mixed, middle class city of 145,000 a little over 20 miles south of Los Angeles. Twenty-five percent of the students in its public schools qualify for free or reduced-price lunch, and 16 percent are English learners.   About 29 percent are Latino, 29 percent are Asian,  22 percent are white, 8 percent are Filipino and 4 percent are African American.

The new standards, called Next Generation Science Standards, were introduced nationally in 2013, in response to concerns among science educators, political leaders and many others that K-12 science instruction in the United States trails behind many other industrialized countries.

So far, 19 states and the District of Columbia have adopted the standards, California was among the first. Stressing hands-on projects and critical thinking, the new standards represent a significant shift for most teachers — not just a change in subject matter, but to a new way of teaching, with less emphasis on textbooks and classroom lectures and more on open-ended scientific inquiry.

That shift has required additional professional learning for even the most veteran teachers. Districts across California are preparing teachers now, either by sending them to off-site seminars, sitting in on colleagues’ classrooms or going to multi-day workshops over summer or school breaks.

At the trainings, teachers learn the standards’ core ideas, such as “cause and effect” or “relationships in ecosystems,” which are incorporated into all grade levels, as well as practical tips such as how to make lesson plans and oversee regular science experiments in class. The goal is for students to understand the broad scientific concepts that link all scientific disciplines and to learn those concepts through hands-on classroom projects.

In California, all students are expected to be taught using the new standards by spring 2019, when schools will administer standardized tests based on the new standards.    Students in some grades have already begun taking a pilot version of the test.

Torrance’s jumpstart began with a handful of science teachers, who were impressed with how the new standards focused on “doing science, not just listening to a teacher talk about it,” said Marissa Stillittano, a former classroom teacher who’s now one of the district’s Next Generation Science Standards trainers.

California had not updated its science standards since 1998, and some states hadn’t revised theirs since the 1980s. The new standards include recent scientific research breakthroughs as well as technology and engineering components, which were lacking in the previous standards.

“There hadn’t been a lot of attention given to science education until Next Generation came along,” Stillittano said. “To see this national focus on science education and everything it could be was just very exciting, a chance to clean the slate. It was like, ‘OK, we can get this right.’ ”

Stillittano, Argento, colleague Tera Black and other science teachers pushed the district to get an early start on training. The district agreed to fund two new positions to oversee the training and pay for substitutes so teachers could attend training throughout the year.

Stillittano, Argento and Black started by learning the new standards themselves, then began organizing trainings in the district. They hold several trainings a week for small groups of teachers, divided by grade or subject matter.

They try to keep the trainings focused and practical, encouraging teachers to collaborate, share curriculum ideas and resources, such as beakers, scales and microscopes for classroom science projects.

They also give teachers materials they’ll need for classroom projects, such as balloons or baking soda, and give teachers tips on how to share supplies and where to buy materials at the lowest prices.

But the most important aspect, they said, is the element of fun — the same thing that makes the new standards so popular with students. To help colleagues feel welcome and relaxed, Argento, Stillittano and Black wear matching outfits (during one recent training, all three wore black dresses and yellow sweaters), bring baked goods and lead the teachers in the same science experiments they’ll be overseeing in their classrooms during the school year.

That means teachers make their own topographical maps of California using homemade play dough, or go outside to learn about energy transference by tossing dried pinto beans at each other.

“You don’t learn swimming by reading a book. You jump in the pool. So we jumped in the pool,” said Katie Schenkelberg, a former science teacher and current principal at Carr Elementary, who was among the original teachers who championed the new standards.

There are also evening sessions for parents to learn about the new standards, and trainings for other districts as well.

In a 5th grade classroom at Towers Elementary, the new standards were in full swing on a recent Wednesday afternoon. Students were learning about properties of matter by dragging Q-tips soaked in iodine across Russet potato slices.

One student, Gavin Ashley, dropped his jaw and gasped when his potato turned from creamy white to ashy gray.

“I was not expecting that!” he said, scribbling his observations in a notebook. “I thought it would turn orange, the same color as the iodine. … I like how in science there’s so many different things you can try. It’s not boring.”

Torrance Unified has drawn the attention of the nation’s science education leaders, who praised the district’s efforts to fully implement Next Generation Science Standards ahead of schedule and on a limited budget.

“I haven’t heard of another district of that size that has completed multiple trainings for all of their teachers,” said Chad Colby, spokesperson for Achieve, an education research nonprofit that helped craft the standards. “Torrance Unified — the educators, school leaders, the superintendent and school board — should be commended for making science education a priority.”

Torrance is not the only district to get a jumpstart on the new standards. Elsewhere in California, eight other districts and two charter organizations are part of an “early implementer” program overseen by WestEd, the research and consulting firm headquartered in San Francisco, but Torrance has made its advances on its own.

“What sets Torrance apart is that, I far as I know, they did it without major grants or outside funding,” said Kathy DiRanna, statewide director of WestEd’s K-12 Alliance, which provides professional development workshops to  science teachers. “I know they have a dedicated group of science leaders that have helped pave the way. They are to be commended for the advancements that they have made.”

Although all students are now learning the new standards and nearly all teachers have undergone multiple trainings, the process is not complete, said Ramona Chang, the district’s curriculum director. Because science is always changing and teaching techniques constantly evolve, professional development — especially related to something as nuanced as the Next Generation Science Standards — should be ongoing, she said.

“In a perfect world, this would never terminate,” she said. Over the next few years, the district plans to pay for continued teacher training using state funds designated for this purpose in its Local Control Accountability Plan and small grants to teachers from the Torrance Education Foundation, as well as bond money to build science laboratories in its elementary schools. “We have been fortunate to have the support of our community.”

West High School biology teacher Nikki Chambers, who was on the science expert panel that helped California adopt the new standards, said switching to Next Generation Science Standards is not a simple or fast shift. Extensive teacher training, patience and administrative support is crucial for a rollout to be successful.

“These standards are not what we were taught as children, and the teaching style is not the way we were taught to teach. It is a monumental change,” she said. “But what validates it for me is the buy-in from kids. The sense of wonder I see in my kids’ faces makes it worth every moment. I am convinced that this is the right way to teach science, and for districts, it’s the right thing to do.”

What are the Next Generation Science Standards?

California’s Next Generation Science Standards describe a new set of learning goals based on research on how students learn best. Teachers are expected to support more student-centered learning that helps students to think on their own, problem solve, communicate and collaborate. The new standards emphasize critical thinking over rote memorization, more hands-on science projects, and common scientific concepts present in all scientific disciplines such as “cause and effect” and “structure and function.” The standards also require students to investigate, collect and use data, and give evidence-based explanations for what they discover.

The California standards require science to be taught in every grade from kindergarten through 12th grade to build understanding and skills systematically year by year. Beginning in the spring of 2019.students in grades 5 and 8 and in one high-school grade will be tested on a new California Science Test, or CAST, which the state is currently developing. It will be up to each high school to decide in which grade they administer the test.