A new policy from the California State University system will soon allow some students to take math classes with pre-requisites other than intermediate algebra to satisfy the math requirements they need for graduation.

The new rules go into effect starting in the fall of 2018 and will apply to both CSU freshmen and community college students transferring into the 23-university system. The changes will permit students who are not pursuing math or science majors to take non-algebra-based math courses to meet “general education” requirements, such as statistics, personal finance or even game theory and computer science.

Mastery of intermediate algebra is currently a pre-requisite to take these courses.

“We’re not eliminating the math requirements in the CSU,” said Christine Mallon, assistant vice chancellor of academic programs and faculty development at CSU. “We are removing the explicit intermediate algebra pre-requisite from CSU (general education) math.”

General education requirements are a set of courses students must take in order to earn a bachelor’s degree.

“What this does is gives students more flexibility, more choices about a particular GE course they want to take so that they can take a course that fits their major and their career aspirations,” Mallon added.

Admissions requirements for CSU will still include three years of Common Core math, which include two years of Algebra. The change has to do with whether admitted students must repeat their intermediate algebra as a remedial course.

Mallon said that between winter and spring 2018, Californians should expect the state’s community colleges to submit non-algebra math courses for CSU approval in order to count toward CSU general education requirements in fall 2018 and beyond.

In the fall of 2016, 49,737 community college students transferred to the CSU campuses.

The new rules don’t change which majors at CSU require math courses with algebra as a pre-requisite, however. The policy change applies only to how students can satisfy general education requirements. Students seeking careers in math, science, engineering or other math-heavy work would still need to pursue algebra and other higher level math courses.

The new rules on algebra will particularly affect students historically in need of remedial math. Twenty-eight percent of regularly admitted Cal State freshmen are placed in remedial math, according to data from CSU, meaning that they’re so behind in math that they need to learn skills usually mastered in high school. 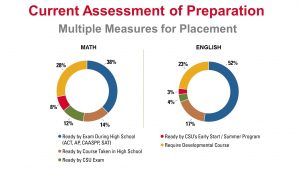 Students have to pass a math course in high school that covers intermediate algebra for admission to CSU. But freshmen who didn’t score high enough on a CSU placement test or tests such as the SAT, ACT or The Smarter Balanced tests then have to take remedial math at their Cal State campus.

The chancellor of the California Community College system, Eloy Ortiz Oakley, said last month that he’d like to see intermediate algebra dropped as a requirement for earning an associate’s degree because it has become a barrier especially for first generation students and students of color who often place into remedial classes.  CSU’s policy change is likely a major step in that direction.

With few exceptions, most transfer students currently seeking entry into CSU have to satisfy the system’s general education requirement by taking a college-level math course that includes algebra in its sequence. The new policy will change that.

Allowing students to satisfy the college math requirement with courses other than those that require intermediate algebra as a prerequisite is meant to give more students an opportunity to take classes that best fit their career ambitions. The change was inspired by a 2016 faculty report presented to CSU leaders that questioned the need for intermediate algebra as a requirement for all students. It noted that in the past 20 years math courses that don’t rely on intermediate algebra knowledge “have greatly expanded in enrollment and content…and the curriculum tends to be less algebraically intensive but in many respects significantly more conceptually challenging than intermediate or college algebra.”

Katherine Stevenson, a CSU professor who co-chaired the task force behind the report said they concluded that today’s workers should have a solid grasp of the math taught up to 9th grade to succeed. First-year algebra falls into that spectrum but not intermediate algebra. But, the task force recommended that students take math beyond 9th grade algebra as specified in the Common Core state standards, she said.

The higher education community has been debating the need for intermediate algebra with greater gusto the past several years. A 2014 policy statement from the American Mathematical Association of Two-Year Colleges declared that “Prerequisite courses other than intermediate algebra can adequately prepare students for courses of study that do not lead to calculus.”

Chris Edley, former dean of the UC Berkeley School of Law, called removing the intermediate algebra requirement a civil rights issue because a disproportionate number of black and Latino students failed to pass remedial courses based on algebra. Most of the students were pursuing careers outside of the sciences and math. “The test of being successful in first-year law school has to do with logic, with being analytical. It doesn’t have to do at all with quantitative skills,” he said in an interview.

Beyond the question of which math course is appropriate for meeting the “general education” requirements, CSU faculty are also debating which majors that are in the recently created “Associate Degree for Transfer” program will require math courses with intermediate algebra as a prerequisite. CSU officials expect to answer that question sometime in the fall. The transfer program, which includes 36 majors ranging from art and philosophy to business administration, allows community college students who take a prescribed list of courses to enter the CSU system as juniors after taking 60 units.

A recent report from the California Community Colleges system found that the typical transfer student actually accumulated 87 units — nearly a year’s worth more than needed,  increasing students’ frustration and their risk of dropping out.

“I think the conversation we’re having now is somewhere in the middle — that is to say, are the requirements entirely necessary depending on major, depending on field of study?” said James T. Minor, senior strategist for academic success for the California State University system, and who is playing a central role in shaping the system’s policy on math requirements.

“The other is, even for the majors where it is required and necessary, could we do a much better job at teaching students algebra, calculus, with much better success rates?” he asked.

Pamela Burdman, an independent researcher who has written about remedial education and math competency in California, said math or computationally heavy courses have been used to filter out students, even if those courses aren’t needed for the major. “UCLA was requiring physics as a pre-requisite to becoming a psychology major. I don’t think anyone can make the case that it’s necessary to do physics in order to be a psychologist,” she said.

This story was updated at 1:41 p.m. and 5:29 p.m. on Aug. 2, 2017, to clarify that the change in CSU math prerequisites does not affect admissions requirements to CSU and why high school students who passed an intermediate algebra course may still have to take a remedial course covering that material at CSU.