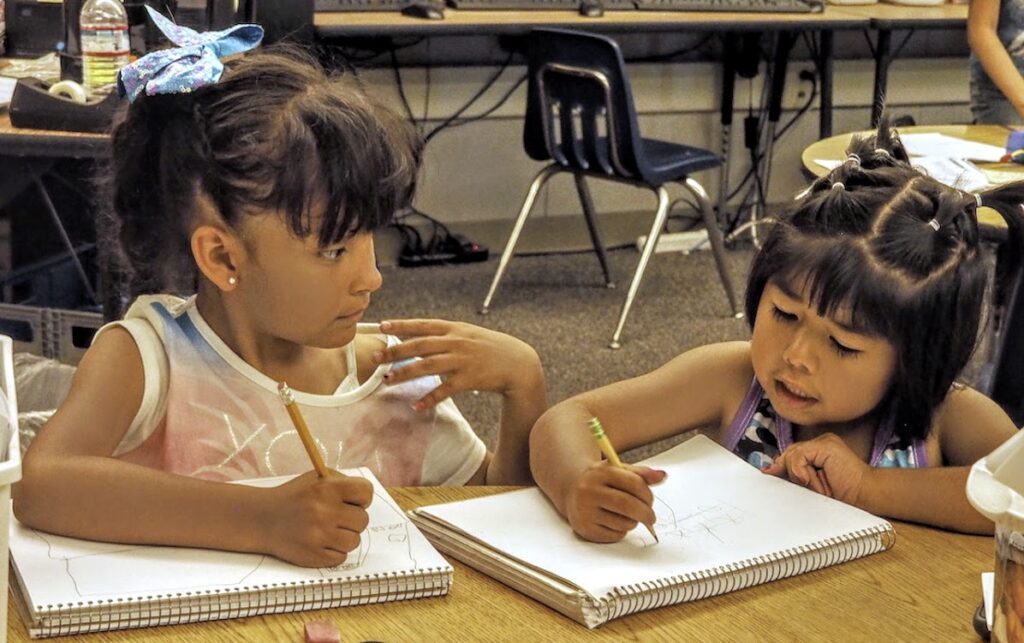 Liv Ames for EdSource
Jocelyn Andrade-Prado and Brianna De La Trinidad work together on a lesson at their school in Lindsay Unified.

Liv Ames for EdSource
Jocelyn Andrade-Prado and Brianna De La Trinidad work together on a lesson at their school in Lindsay Unified.

The walls tell the story at Lindsay Unified. In every classroom – from kindergarten through 12th grade – each student’s name is on a list on the wall that shows what students have learned and what they need to do next for every topic they are studying. After checking the list each day, students get to work, with no need for prompting from their teachers.

This small rural district in Tulare County has embraced “performance-based learning,” which breaks down the way classrooms are traditionally structured so that students can work independently, with teachers providing individualized support. Lindsay is part of a growing national movement, with more schools promoting the concept of students working at their own pace, being in charge of their own learning and advancing only when they can show they understand the material.

“We have to teach kids to not be passive in their learning,” said Lindsay Unified Superintendent Thomas Rooney.

The teachers at Lindsay are called “learning facilitators” because they are less of a focal point than in a traditional classroom. In these classrooms, they answer questions and work with small groups of students who need help or are ready for the next topic. Students, called “learners,” set their own pace and monitor their own progress using the lists on the wall.

“We have to teach kids to not be passive in their learning,” said School Superintendent Thomas Rooney. “We make the learning transparent. This is what you need to do to demonstrate mastery. This is where you are. You are going to track your own progress.”

Teachers are typically familiar with material the grade level below and above the grade they teach. But they also collaborate with each other to meet student needs. If a 6th-grader is ready to learn a 7th-grade topic, he might be sent to a 7th-grade classroom when that teacher is presenting the topic.

Being able to collaborate with other teachers and share their students with each other “takes a lot of trust among adults,” said Cinnamon Scheufele, the principal at the district’s Washington Elementary and a former teacher there.

Kristy Caesar, a kindergarten teacher at Kennedy Elementary, said kindergartners mostly stay in their own classroom, except when students are academically far ahead of their peers. “This one little boy was such a high flier, I sent him next door to a 2nd-grade classroom” for certain lessons, she said.

More schools across the nation are adopting performance-based learning. In California, a few – including those in Vista Unified in San Diego County and Summit Public Schools, a charter organization in the San Francisco Bay Area – have fully embraced it. Other schools have adopted some aspects of the approach, such as using computers to individualize learning.

Computers typically play a key role in performance-based learning, making it easier for students to work at their own pace. But Lindsay made the shift in 2009 without the benefit of computers for every student.

Since then, the district has used grant funds, including a portion of the $10 million federal Race To The Top grant it received in 2012, to provide computers for every student and free internet access to the small farming community in the Central Valley.

The district made the change because students were not thriving under the traditional system, Rooney said. Dropout rates were high, and those who did graduate rarely went to college. More than 80 percent of the 4,237 students at Lindsay are low-income and almost half are English learners, according to 2015-16 data from the California Department of Education. About 30 percent have parents who are migrant workers, Rooney said.

Now seven years into the performance-based learning transformation, the district is fully committed to the approach. The district’s graduation rate has risen from below 70 percent in 2010-11 to about 82 percent in 2013-14, the latest data available for the district. The number of students who have completed A-G requirements for entrance to state universities has doubled – from 17 percent in 2008-09 to 34 percent in 2014-15.

Students have also made substantial gains in district tests of reading proficiency, Rooney said. However, results on the state Smarter Balanced tests in 2016 showed that 42 percent of students scored “standard not met,” the lowest category, in English. High school students did better than elementary school students, partly due to demographics, Rooney said, with two-thirds of 3rd-graders identified as English learners compared with one-third of 11th-graders.

Educators from California and across the nation visit Lindsay to see what performance-based learning looks like. They find that most classrooms are quiet – the students absorbed in their work. Students work together on topics, talking softly, while others study on their own. Sometimes a group of students will present a project for feedback from their classmates. Even in kindergarten, students edit each other’s work before turning it in to a teacher.

“We had to create a culture in which adults gave some ownership to the learners,” Rooney said.

Marla Ernest, who teaches English language development at Lindsay High, said: “You never hear a kid say, ‘I’m failing a class.’ They always feel they are working toward proficiency. If they’re not on pace, they figure out what to do to catch up.”

Students must pass district assessments for each topic in English, math, science and social studies. Student achievement is rated from level 1 to 4 based on these assessments. When students reach level 3, they are considered proficient and can move on to the next topic.

Students can reach level 4 by doing a project that combines more than one standard or by helping a classmate reach level 3. Level 4 is equivalent to earning an A and would be counted as 4 points in a grade point average.

All students are aware of their progress, even kindergartners and 1st-graders such as Jose Herrera-Vasquez, who pointed to his classroom’s wall where it showed how far he had progressed – to level 3 – in reading and writing in kindergarten. To reach that level, he pulled out the set of short words, such as “red,” “blue” and “very,” he had to be able to read and write.

“Kids can see what they need to learn, where they are going and whether they are on pace,” said Caesar, the kindergarten teacher. “It inspires them and lets them help one another and learn from each other.”

All students can also easily see how their classmates are doing, but there is no shame about being at level 1 or 2 in a topic.

“Everybody is good at something,” Caesar said. “It’s all about the culture you create.”

Marla Ernest, who teaches English language development at Lindsay High, said: “You never hear a kid say, ‘I’m failing a class.’ They always feel they are working toward proficiency. If they’re not on pace, they figure out what to do to catch up.”

“We were held back sometimes and at other times pushed forward when we didn’t understand the content,” she said.

Some teachers say the new approach requires more work because they have to be prepared with multiple lesson plans each day.

The theory “sounds great until you have 30 kids and no one is in the same spot at the same time,” said Tammy Hellwig, who has taught science at Lindsay High for the past 28 years. “You try regrouping them. You stay after school with the kids if you have to.”

Scheufele said the teachers at her school like the requirement that every student needs to reach proficiency in every subject, partly because a lot of them grew up in neighborhoods with poor quality schools.

“It’s not just a cool idea,” Scheufele said. “It becomes an equity issue.”

Whether students succeed, Hellwig said, has a lot to do with how much effort they put in. “If they work at home, they can study at a deeper level.”

But not all students have that luxury. Some have parents who are migrant farmworkers and need their older children to help support the family by working in the cherry and apricot orchards that surround Lindsay.

High school student Jesus Ceballos said that he has had trouble studying at home because of family obligations, such as working in the cherry fields during summers and helping his father repair houses on weekends.

But Ceballos said the school has motivated him to continue with his studies, graduate and go to college.

“My teachers have always been here during tough times,” he said. “They don’t just help me academically.”