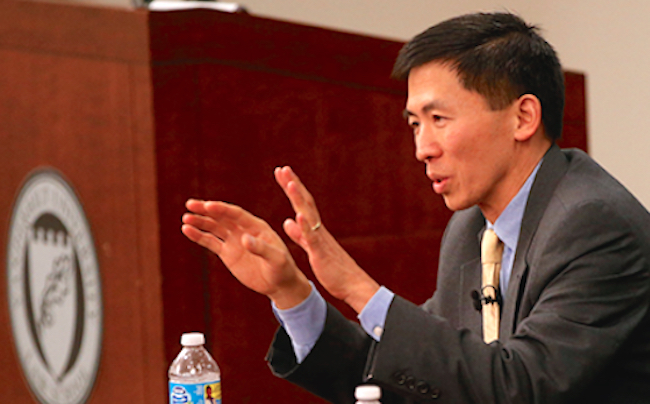 California Supreme Court Justice Goodwin Liu made it clear in his long dissenting opinion last week that he hasn’t given up hope that there’ll be another lawsuit asserting students’ right to adequate school funding, and that next time, one more justice will switch sides and agree to hear the case.

In turn, plaintiffs behind the failed attempt say they’re open to the idea of trying again but are not ready to recommit. Their effort, after all, took six years, cost more than $1 million in legal fees — and, in the end, never even made it to trial. In April, a three-judge panel of the 1st District Court of Appeal ruled 2-1 that the courts lack the authority to tell the Legislature how much to fund education. On Aug. 22, the state Supreme Court declined to hear the appeal.

John Affeldt, managing attorney of Public Advocates, which brought Campaign for Quality Education v. California, a companion lawsuit that the courts combined with Robles-Wong, said there are two options: another lawsuit or a ballot initiative to strengthen the broadly worded sections of the state Constitution that courts have interpreted as creating children’s fundamental right to an education. “It would clarify that ‘fundamental’ requires a minimum level of quality; it would define what a student needs to get a decent education,” he said.

In his dissent, Liu argued that California’s children deserve to know whether their fundamental right to education was a “paper promise or a real guarantee” and that the justices may have occasion to reconsider their ruling “if our education system further stagnates or worsens.”

Liu was one of three justices who dissented in the school finance case. The other dissenters — one shy of a four-justice majority — were Mariano-Florentino Cuéllar, like Liu, an appointee of Gov. Jerry Brown, and Ming Chin, appointed by Gov. Pete Wilson.

As is custom in decisions on whether to take a case on appeal, the majority didn’t explain their decision. What was unusual, legal scholars agreed, were the lengthy and strong dissents by Cuéllar and, particularly in Robles-Wong/Campaign for Quality Education, by Liu. Both were law professors — Liu, at UC Berkeley School of Law and Cuéllar at Stanford Law School — with expertise in K-12 education.

Liu’s 11-page dissent was a point-by-point refutation of the 2-1 decision by a panel of judges of the 1st District Court of Appeal in San Francisco that concluded the courts lack the authority to tell the Legislature that school funding was inadequate. The dissent “was written to get a fourth vote with an eye toward the future,” said Erwin Chemerinsky, dean of the UC Irvine School of Law. “It’s clear that Liu and Cuéllar really like to deal with issues of schools and education in California. They are young and will be there (on the court) a long time.” Liu is 45 and Cuéllar is 44.

In 2008, Liu co-authored a paper proposing a weighted student funding formula for distributing more money to low-income students and English language learners. It became the basis for the Local Control Funding Formula that Brown championed and lawmakers passed in 2013.

Another co-author was Michael Kirst, an emeritus education professor at Stanford University. In a small-world coincidence, Kirst became Brown’s choice as president of the State Board of Education and a defendant, by name, in the Robles Wong/Campaign for Quality Education lawsuits.

Kirst has said he’s prohibited from talking about the case but, in his dissent, Liu credited the funding formula for replacing “what many believed to be an outdated and arbitrary funding scheme with a more rational and equitable distribution.” But he also acknowledged that while the funding formula distributes money more equitably, “it does not purport to prescribe adequate funding levels.”

“Meanwhile,” he wrote, “student achievement remains low” for all student subgroups, compared with the performance of students in other states on national tests. And even before funding cuts following the recession, California’s student-to-staff ratios were among the highest in the nation. “The schoolchildren who brought these actions do not claim they are entitled to a world-class education. They ask only whether the California Constitution protects them from being deprived of a minimally adequate education,” Liu wrote.

Mixed record in other states

Chemerinsky wrote a letter to the state Supreme Court, urging it to take the case, as did Michael Rebell, a professor of law and educational practice at Teachers College at Columbia University and Columbia Law School who litigated a New York State school financing lawsuit. Both said they were disappointed and surprised that the state’s highest court declined to hear the funding lawsuit.

“We should not leave the schoolchildren of California to wonder whether their fundamental right to education under our state Constitution has real content or is simply hortatory.”

“The schoolchildren who brought these actions do not claim they are entitled to a world-class education. They ask only whether the California Constitution protects them from being deprived of a minimally adequate education. They are asking the judiciary, as the ultimate guarantor of constitutional rights, to define and safeguard their fundamental right to education.”

“This decline of California’s K-12 education system, as the student population has become more diverse, is well-documented.”

“As these efforts suggest, educational policymaking in California has not been a tale of intransigence. At the state and local levels, many educational leaders have labored mightily to provide all children with access to a decent education, and we should not ignore their successes. However, as the complaints allege, the past two decades have not produced a tale of overall efficacy either.”

“Here you had a divided court of appeal, and the Supreme Court let it stand,” Rebell said. “It’s strange especially since California is the granddaddy” of school financing litigation; in the 1971 Serrano v. Priest decision, California’s Supreme Court became the first to declare education a fundamental right demanding equal protection under a state Constitution.

Since then there have been school funding lawsuits in all but a handful of states, with courts deciding about 40 percent of the time that they’d be overstepping their bounds in determining funding levels, Rebell said. In almost all of the remaining cases, he said, courts sided with the plaintiffs, after reviewing evidence, and found that the school systems were inadequate.

Eric Hanushek, an economist at the Hoover Institution at Stanford University and author of the 2009 book on school litigation, “Schoolhouses, Courthouses and Statehouses,” said that the experience of states over the decades should serve as a warning to the California Supreme Court not to immerse itself in school adequacy litigation.

“All sides agree that California schools have to be improved; the question is how,” he said. “My view always has been that courts are a bad place to make education policy. Adequacy cases have not been well argued and thought through.”

In states like New Jersey, he said, adequacy litigation has lasted 40 years and resulted in much higher levels of school spending without marked improvement. In continuing litigation in Washington and Kansas, legislatures refused court orders to spend more. In states like Massachusetts and Kentucky, where legislatures approved higher spending levels and schools improved, it’s not clear that more money was the cause, Hanushek said.

Liu cited Kentucky and Massachusetts as examples of litigation in which the courts and legislatures worked together to produce “important reform,” while acknowledging justices’ concern that a dispute over separation of powers could potentially lead to a “collision course with the Legislature.” He wrote that before evidence is laid out in a full trial, it’s “far from clear” that justices would determine they must order the state to spend more money. He said he hasn’t yet reached that conclusion.

But, he wrote, justices should “proceed in this case, as we do in all constitutional cases, with a strong presumption” that the governor and legislators would work “in good faith” with the court.

Leave a Reply to ELLEN WHEELER