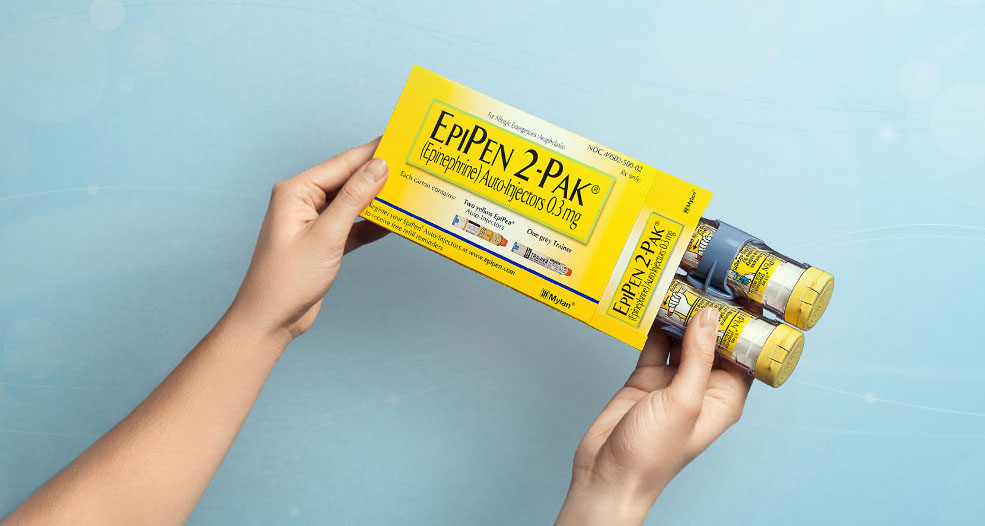 Credit: Courtesy of Mylan
A two-pack of EpiPen epinephrine auto-injectors.

Credit: Courtesy of Mylan
A two-pack of EpiPen epinephrine auto-injectors.

Gov. Jerry Brown berated the manufacturer of a life-saving emergency allergy treatment on Friday for price gouging, even as he signed legislation to make it easier for afterschool programs, daycare centers, colleges and businesses to obtain the treatment.

The pharmaceutical company Mylan raised the price of a two-pack of Epi-Pen epinephrine auto-injectors from $100 in 2008 to more than $600 today, Brown wrote in his signing message. Epi-Pens, which reportedly face little competition in the market, deliver a dose of epinephrine to counteract anaphylaxis, a potentially life-threatening allergic reaction that includes difficulty breathing.

“It is difficult to imagine how they can justify the 500 percent increase in the price of Epi-Pens,” wrote Gov. Jerry Brown.

Declaring his “strong objection” to the price increases, Brown noted that they occurred as Mylan was expanding sales by promoting the stockpiling of Epi-Pens as a matter of public health in schools, scout troops, colleges and businesses in California and across the country. Mylan is listed as the sponsor of the new law, Assembly Bill 1386, by Assemblyman Evan Low, D-San Jose, and as a supporter of Senate Bill 1266, by Sen. Bob Huff, R-San Dimas, which passed in 2014 and requires schools to stock epinephrine auto-injectors.

While he was at it, Brown sent a letter Friday to Congressional leaders Mitch McConnell, Paul Ryan, Harry Reid and Nancy Pelosi in support of a bipartisan oversight hearing set for next week concerning Mylan’s pricing of Epi-Pens. “It is difficult to imagine how they can justify the 500 percent increase in the price of Epi-Pens, the 600 percent increase in executive pay and the tax move of their corporate offices to the Netherlands, as recently reported in numerous publications,” Brown wrote.

The new California law will make it easier for summer camps, restaurants and sports leagues to obtain prescriptions for pre-loaded epinephrine auto-injectors by allowing doctors to write prescriptions in the name of an organization, rather than an individual. Someone in the organization must be trained to use the disposable device; a provision to limit the liability for prescription-writing physicians is part of the law.

Epi-Pens often are carried in lunchboxes, backpacks or briefcases by children and adults who know they have serious allergies to a food, drug, bee sting or other matter. Through its “EpiPen4Schools” program started in 2012, Mylan provides eligible public and private schools two free twin-packs of Epi-Pens a year. Last year, a program manager said it appeared that 766 public and private schools in California had placed orders for the free devices from January through mid-May 2015. The EpiPen4Schools program allegedly required schools to agree they would not buy or obtain another brand of injector.

Parents who fear that their child will be caught without an injector or suffer a severe first-time allergic reaction have called for epinephrine auto-injectors to be widely available as a first-aid provision. During legislative debate, Low noted that “schools are not the only place where children can come into contact with allergens capable of causing anaphylaxis.”

On Friday, Low applauded the signing of the bill into law but called Mylan’s increases in Epi-Pen prices and executive salaries “simply unconscionable.” While Mylan sponsored Assembly Bill 1386, Low’s office said Mylan has not made a contribution to the assemblyman.

In response to the outcry in recent weeks over the rising cost of Epi-Pens, Mylan announced it will create a generic Epi-Pen to be sold in a pack of two for $300. The company also is asking that the federal government add the Epi-Pen to its list of preventive medications that are made available to patients with no insurance co-pay. The cost would be born by insurance companies, the government or employers.