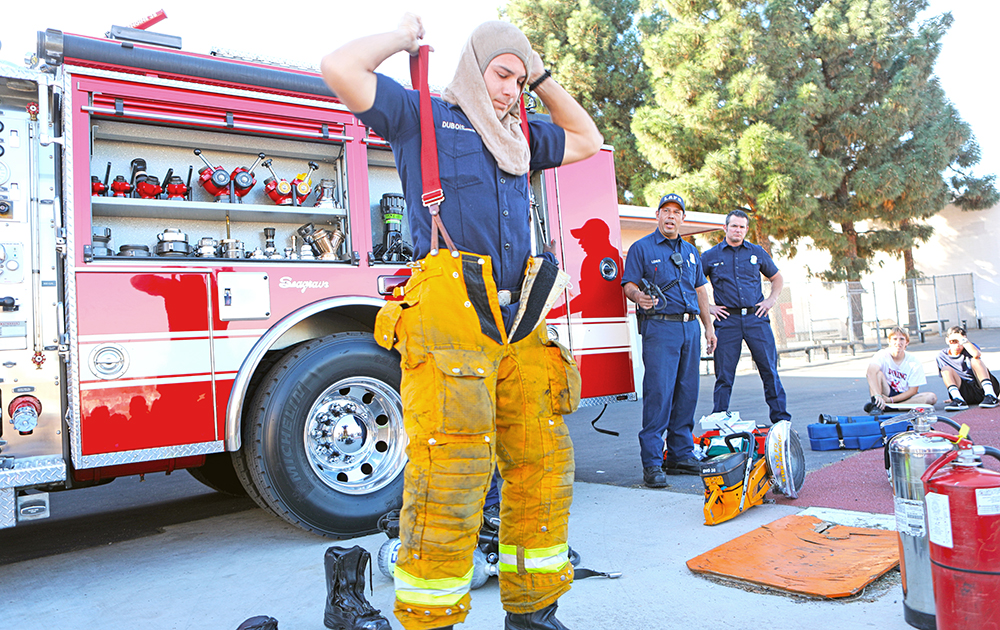 FERMIN LEAL/EDSOURCE TODAY
A firefighter with the Los Angeles Fire Department demonstrates how fast crews must put on their fire gear while responding to a call during a demonstration at Banning High in Los Angeles.

FERMIN LEAL/EDSOURCE TODAY
A firefighter with the Los Angeles Fire Department demonstrates how fast crews must put on their fire gear while responding to a call during a demonstration at Banning High in Los Angeles.

Daniel Chambers’ classes at Banning High School in Los Angeles include hoisting a heavy water hose around his shoulders and running around the track, lifting a 20-foot ladder to climb up the sides of buildings, and dressing in heavy fire coats and other gear within one minute.

Chambers, a sophomore, is one of 70 students from Banning High enrolled in the campus’ first-ever Fire Academy, a four-year career pathway that will prepare them for jobs as firefighters, paramedics and emergency medical technicians.

“I’m receiving training I wouldn’t be able to get almost anywhere else,” Chambers said.

The Fire Academy is also part of a new wave of career training pathways that school districts are creating to prepare students for very specific jobs. For example, Los Angeles Unified students can now enroll in pathways such as coding, which was previously under the computer sciences umbrella; radiology, formerly part of the healthcare program; or filmmaking, which was part of the broad multimedia pathway.

“We found students become more invested in pathways that are dedicated to very specific jobs,” said Keith Abrahams, director of student integration services at L.A. Unified. “There’s more of a connection to an actual career goal.”

L.A. Unified launched the program this year, along with a similar program at Wilson High, in partnership with the Los Angeles Fire Department.

Through the program, students participate in training sessions with firefighters from nearby fire stations. Students also learn CPR, first aid and fire science and technology in classrooms.

By the time they graduate from high school, students will have completed enough coursework and training to apply for an emergency medical technician, or EMT, license and enroll in more advanced fire technology coursework required to become a firefighter or paramedic. These students would also be placed ahead of other candidates who are just starting their training in college.

In a recent exercise, firefighters from the Wilmington Fire Station taught students how to fight fires, starting with using the proper hose size. A one-inch hose works best on small blazes, such as brush fires. For car fires, a 1.5-inch hose will do the job. When battling a building blaze, it’s best to bring out the 1.75-inch hose.

For fire departments, the fire academies have the potential to help agencies recruit a more diverse group of candidates, said Stephen Gutierrez, a battalion chief with the L.A. Fire Department.

“It’s part of a recruitment effort to target the communities we serve,” said Gutierrez, who also graduated from Banning High. “It makes our jobs easier when our first responders know the neighborhoods and the people living there.”

Currently, about half of Los Angeles’ 3,200 uniformed firefighters are white, and more than 97 percent are men, according to a recent L.A. Times report. Gutierrez said new initiatives that target recruitment efforts in local communities will help create a firefighting force that reflects the city’s population.

The 70-student cohort at Banning includes 20 girls. Sophomore Lauren Gutierrez (no relation to the battalion chief) said she never considered becoming a firefighter until she heard about the program at her campus.

“Honestly, it wasn’t anything I ever thought about,” she said. “Now I think this could be a job in my future. It’s a job where you get to save lives. It’s very empowering.”

For students in the academy who eventually decide to pursue careers unrelated to firefighting, the program also teaches important life skills students can take with them to any job, said Rudy Mendoza, Banning’s principal.

“They learn teamwork, self-confidence, communications skills and work ethic,” he said. “We don’t expect every student here to become a firefighter. But we expect them to learn these skills they can use in all aspects of their lives.”