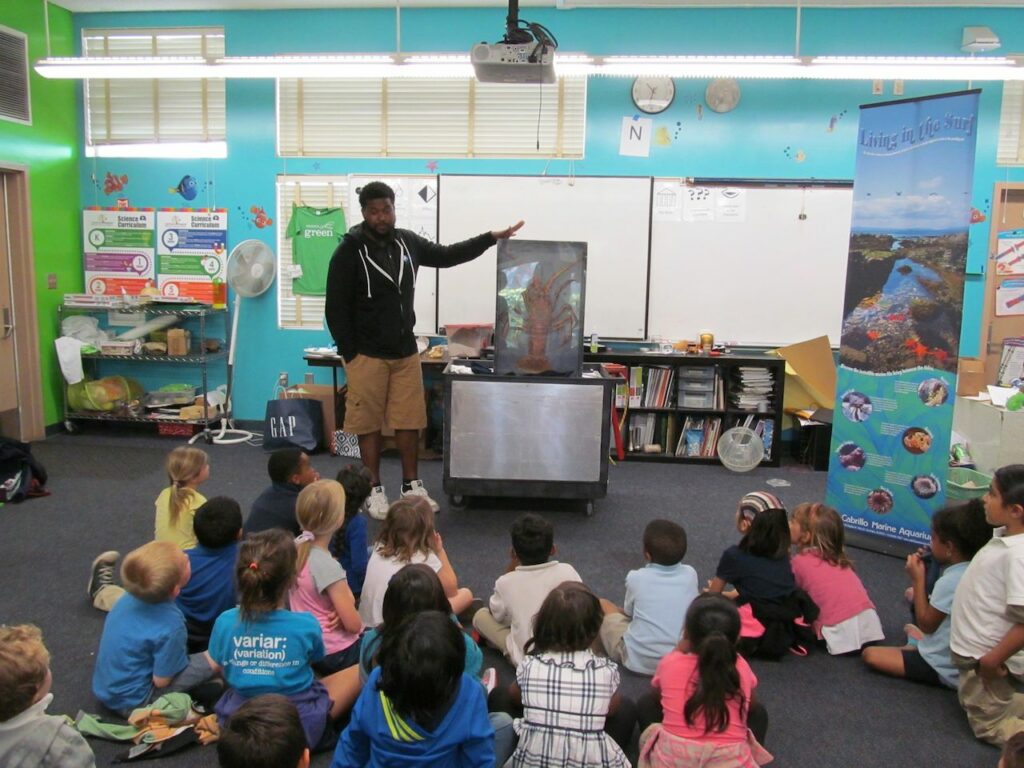 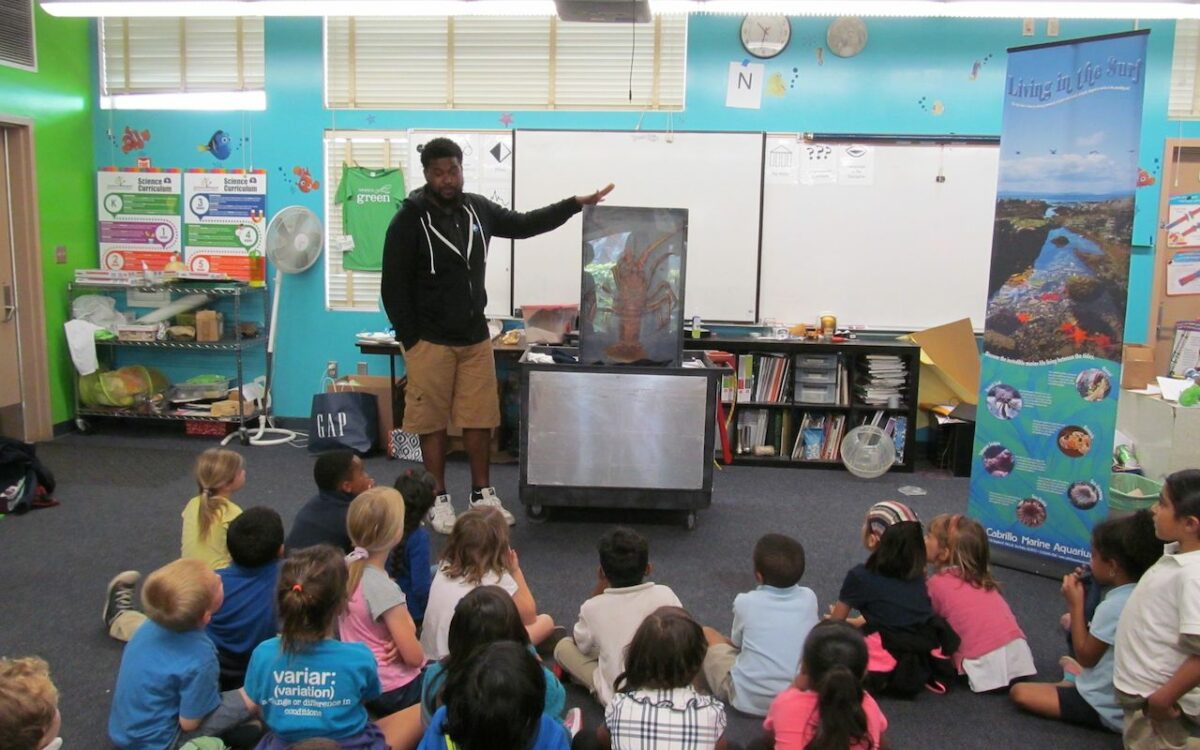 The average grade-schooler learns about water pollution by opening a textbook, but at one elementary school near Pasadena students studied the problem by visiting Catalina Island, where they dissected fish and examined their stomach contents under microscopes. In this unusual 5th grade class setting, they discovered firsthand the dangers of microplastics – toxic particles that contaminate the sea and enter the food chain after fish ingest them.

Scientific investigation plays a key role in the curriculum at the Jackson STEM Academy, a science, technology, engineering and math (STEM) magnet school in the Pasadena Unified School District.  At the school, students complete final projects before graduating, devise solutions to real-world problems and choose how they will present the subject matter they’ve mastered. Whether students are studying art, literature or social studies, teachers integrate science and math into coursework.

The program is in line with the methods teachers are encouraged to use as California schools begin to to implement the Next Generation Science Standards, ushering in a major overhaul of how science is taught in kindergarten through 12th grade. Through an interdisciplinary approach to learning, student projects and collaboration, the goal of the Jackson Elementary program is to turn children into critical thinkers and give them the skill sets scientists use. Those are all elements the Common Core and Next Generation Science standards say should be included in a quality STEM program.

“We’re bringing in real scientists, and for our students to be able to see that makes science more real to them,” said Hoori Chalian, Pasadena Unified’s director of innovative programs.

But Pasadena Unified is able to elevate that learning approach because of its location in the same city that houses both the California Institute of Technology and Jet Propulsion Laboratory, allowing Jackson students to routinely hobnob with some of the nation’s leading researchers.

“We’re the home turf for a lot of these big organizations that are working on these major national initiatives like the Thirty Meter Telescope,” said Hoori Chalian, Pasadena Unified’s director of innovative programs. “We’re bringing in real scientists, and for our students to be able to see that makes science more real to them. It’s a wonderful advantage.” 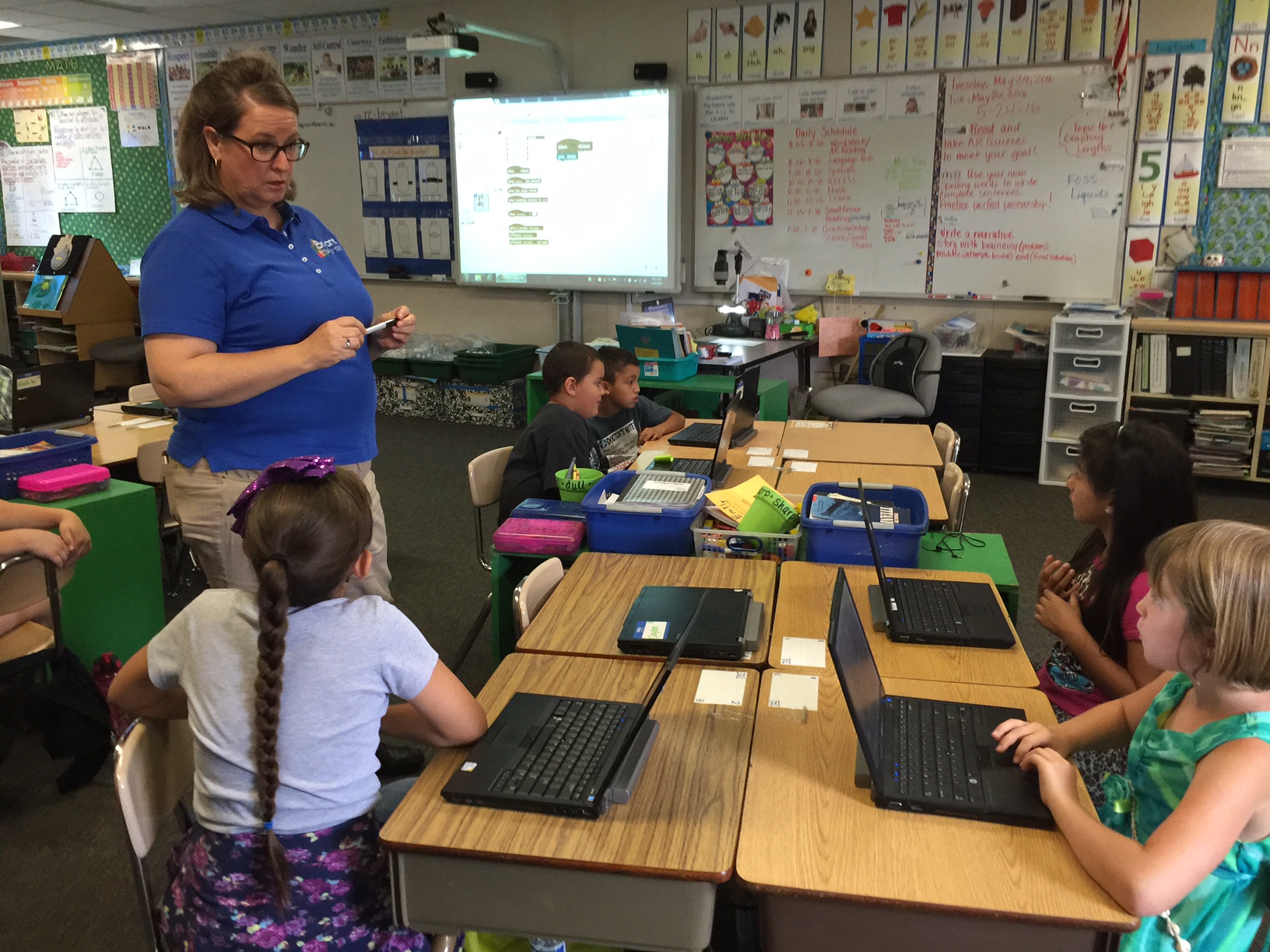 Three years ago the district won a $7.9 million Magnet School Assistance Program federal grant to launch magnet programs at Jackson and three other schools. But Chalian said even schools without grant money or Caltech nearby can develop top STEM programs.

“Everybody does it their own way, but I think a lot of what we do is replicable,” she said.

At Jackson Elementary, students are not only exposed to industry players and hands-on learning; they also take charge of presenting what they’ve learned. When the 5th-graders returned from Catalina, they used different approaches to present their findings about microplastics. One group of students created a video game, while two girls used iMovie to document the crisis.

“We learned that there are millions of tons of plastics and microplastics in the ocean,” said Celeste Sharp, half of the duo. “Fish think it’s plankton, and if their stomachs have too much, there’s no room for real food and they die.”

Celeste suggested a potential remedy to the toxins – “upcycling” or reusing waste in a manner that enhances its value. She wore a crudely made dress of plastic bags to demonstrate one way to prevent manmade waste from ending up in the ocean. In recent years, retailers such as Patagonia have debuted apparel made from recycled plastics.

Jim Brodie Brazell, a technology consultant and author, said STEM aims to get students to think analytically. He’s unaffiliated with Jackson Elementary but has presented workshops and speeches to the President’s Council of Advisors on Science and Technology, the National School Boards Association and schools throughout the country about best STEM practices.

He said quality programs give students the opportunity “to learn through feedback, to get it wrong and to make an adjustment and to learn from that.”

Around the Jackson campus, STEM’s imprint is everywhere. A maze of mathematical multiples is painted on the ground and bulletin boards with perfectly symmetrical student artwork fill the hallways. There’s a garden, computer lab and science classroom that contains research projects, sea creatures in tanks and a tortoise on the patio. These features serve to keep students curious about their surroundings.

“I think what makes a model [STEM] program is true integration in instruction,” Chalian said. “Being able to provide real world experiences, to have face time in the field, being able to engage in learning, whether it’s units of study that just train students to be problem-solvers and critical thinkers to being able to work together to solve problems. All of that has the potential for future career success.”

The lure of STEM

Before it became a STEM magnet school, Jackson Elementary’s future was uncertain. Enrollment dropped, prompting talk of closing the school six years ago, staffers said. But as the 2015-16 school year ended, it was at capacity with 508 students and a waiting list of children vying for spots in its STEM program and popular dual language immersion program.

Jackson still faces challenges, though. According to statewide education data, nearly 88 percent of students qualify for free and reduced-price meals and nearly 43 percent are English language learners. Parents flock to the school in hopes that the STEM program puts their children on the path to a high-paying career, said Mitchel J. Aiken, associate director for educational outreach at Caltech’s Center for Teaching, Learning & Outreach.

“They think if the child is prepared in STEM, they will have a better shot of moving into a rewarding career,” he said.

Caltech representatives periodically drop by Pasadena schools. They make presentations and reach out to youth who are underrepresented in fields such as robotics or coding. Caltech also hosts a summer science program for students, and three times a year volunteers help teachers try out innovative lessons to use in class.

Corporations with a direct interest in effective STEM education are peppered throughout California – be it JPL in Pasadena, SpaceX in Hawthorne, Amgen and Baxter Bioscience in the Conejo Valley or other  trailblazers in Silicon Valley. But for school districts without these industry giants nearby, there are other potential sources of support, such as community college faculty who can help them implement a comprehensive STEM curriculum.

“I would encourage schools to not be afraid and not be shy about reaching out to local experts,” Aiken said. “Most people, even though they’re very busy, are excited about helping schools.”

According to AdvancED, a nonprofit that conducts on-site external reviews of schools, establishing a quality STEM program also requires engagement from community groups. Pasadena Unified has long had the support of the Pasadena Educational Foundation, a nonprofit that fundraises on behalf of the school district and operates as a separate organization. The 45-year-old organization has funded a robotics program in the district, technology for students to use in class and $1,000 grants for teachers.

“The STEM teachers have come to use those funds, and they have played a part in helping transform their classroom instruction,” said Patrick Conyers, the foundation’s executive director.

Funding from the foundation has also paid for teacher training, technology maintenance and an app academy, a program in which students learn how to create computer software. In Pasadena, people expect children to receive superior training in math and science, Conyers said.

School districts not located in math and science hubs can enter students in environmental science competitions to design alternative fuel vehicles, enroll them in virtual science fairs or use Web-based tools to program robots, Brazell said.

But, above all, schools should understand the value of STEM, he said.

“It’s a transformational force through which the school can engage and change the world, the community and the school,” he said. “We’re trying to teach kids to save the world where there are no prescribed answers and figure it out, which is to innovate.”