A dozen California school districts are joining more than two dozen states and a fast-increasing number of districts that are making the SAT or its rival, the ACT, available to all high school juniors for free in an effort to encourage more students to apply to college.

Beginning this month, the students are taking the new SAT, which debuted last week. The College Board, the nonprofit that developed and administers the test, says the latest version better measures the core skills that students learn in high school, such as citing evidence from lengthy reading passages to back up their answers. The test also aims to reflect what students learn under the Common Core standards. Among the changes, it eliminated the vocabulary quiz of arcane words that students would rarely see outside of SAT prep courses.

Last week, San Jose, Alvord, Chino Valley and Lynwood unified school districts gave the SAT college entrance exam for free. Next month, Long Beach Unified and Fresno, the state’s third- and fourth-largest unified districts, will give the SAT free of charge to their juniors, as will Oakland Unified, according to the SAT. An additional five districts gave the old SAT for free in October.**

About three of four graduates in San Jose and Long Beach attend college soon or immediately after graduation, but “every student should take the SAT, because who knows when one will need it or not?” said Christopher Steinhauser, Long Beach’s superintendent.

The SAT is integral to the district’s strategy of preparing students for college and careers – its top priority – so it is covering the $54-per-student cost of the SAT for those of the district’s 6,000 juniors who don’t qualify for a low-income fee waiver. And it’s fitting the test into an already crowded schedule of Advanced Placement Tests and 11th-grade Smarter Balanced tests on the Common Core standards in English language arts and math.

About 60 percent of California high school graduates statewide took the SAT last year, about twice as many as took the ACT. Statewide, approximately 40 percent of high school students qualify for the federal free or reduced lunch program, which is also the low-income eligibility standard for SAT and ACT to have their fees waived. 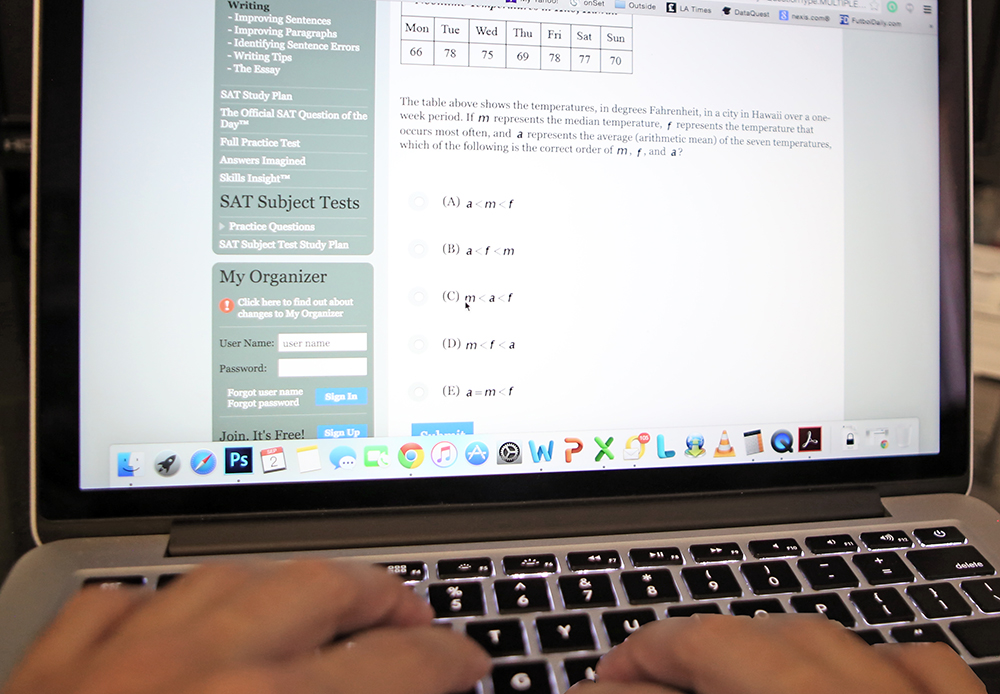 Steinhauser is hoping that the State Board of Education agrees to reduce the heavy test load by permitting districts to substitute the SAT or ACT for the 11th-grade Smarter Balanced tests, which the state board will include in the state’s new school accountability system it is designing. The idea of an SAT or ACT option hasn’t been brought to the state board, which would need to approve the change.

The new federal Every Student Succeeds Act, the successor to the No Child Left Behind law, does permit states to use the SAT and ACT for high school accountability purposes, and some states already have made the swap. Four of the 15 Smarter Balanced states will instead give the SAT to 11th-graders this spring: New Hampshire, Delaware, Michigan and Connecticut. And two states – Montana and Nevada – will give the ACT instead of the 11th-grade Smarter Balanced test, according to Smarter Balanced’s deputy executive director, Luci Willits.

More states are requiring all juniors to take the SAT or ACT at the same time that more colleges – at least 200 to date – no longer are requiring students to submit the scores in their applications, relying instead on grades and other factors. But most colleges, including the University of California, still do.

Steinhauser and Jason Willis, assistant superintendent of San Jose Unified, said that providing the SAT to all students is just one element of their districts’ strategies for raising college expectations and leveling the field to get more students into top colleges. Both districts give the Preliminary SAT (the PSAT) to all students, and cover the $15 fee.

Both districts are also encouraging more students to take Advanced Placement classes  – rigorous courses that can offer college credit, raise a student’s GPA and, Steinhauser said, build students’ confidence that they can handle college work. Long Beach and San Jose are underwriting nearly the full cost of AP tests. The average cost is $92 for each test; students will pay $5 per test.

Long Beach had been giving the PSAT to all 10th graders. But now that it too has been redesigned and its scoring aligned to the SAT, the district this year started giving it to 8th graders, so that student weaknesses can be spotted earlier. Middle schools are using data from the PSAT and dollars from their Local Control and Accountability Plans to get students on track for college, Steinhauser said.

San Jose gives the PSAT to all 9th graders. It’s one of the “exposure points” for students that get them thinking early about college, Willis said.

Acknowledging that private tutoring has always given wealthy students an advantage on the SAT, David Coleman, president of the College Board and an architect of the Common Core standards, has partnered with Khan Academy, the free online tutorial service, for a personalized SAT prep program. Steinhauser and Willis say they’ve gotten good feedback on it.

All Long Beach students who are taking the SAT have signed up for the program, and the district is encouraging parents to permit the district to track their child’s progress. Coleman told reporters in Los Angeles last month that 900,000 students have enrolled in the Khan program – more than three times the number of students who are paying for private test prep services. How effective it is won’t be known until the results are in from this year’s tests.

Last fall, Long Beach also offered a free 33-hour structured AP prep course for juniors – who took the class on Saturday mornings – at a cost of $125,000 to the district, said Robert Tagorda, Long Beach’s director of Equity, Access, and College and Career Readiness. About 15 percent of juniors – 850 students – took it. He said results from past years showed that students who took the course raised their SAT score between 100 and 150 points.

“This is an evolving process,” Tagorda said. “We realized a few years ago that it was not sufficient just to offer the PSAT and encourage students to take the SAT. We need to help prepare students for the SAT.”

Willis said that his district will spend about $500,000 this year to pay for AP and SAT tests for the district’s 2,500 juniors. Sen. Jim Beall, D-San Jose, a member of the Senate Appropriations Committee, said he is interested in having the state pay the costs, either as a voucher for “for all students who want it” or to reimburse districts.

“We’ll start there and scale down,” said Beall, who may introduce a bill “if not this year then next.”

**Those districts are Covina Valley, Hemet, Norwalk-La Mirada, Val Verde and West Contra Costa, which was the first district to offer the SAT Suite of Assessments  for free to students.