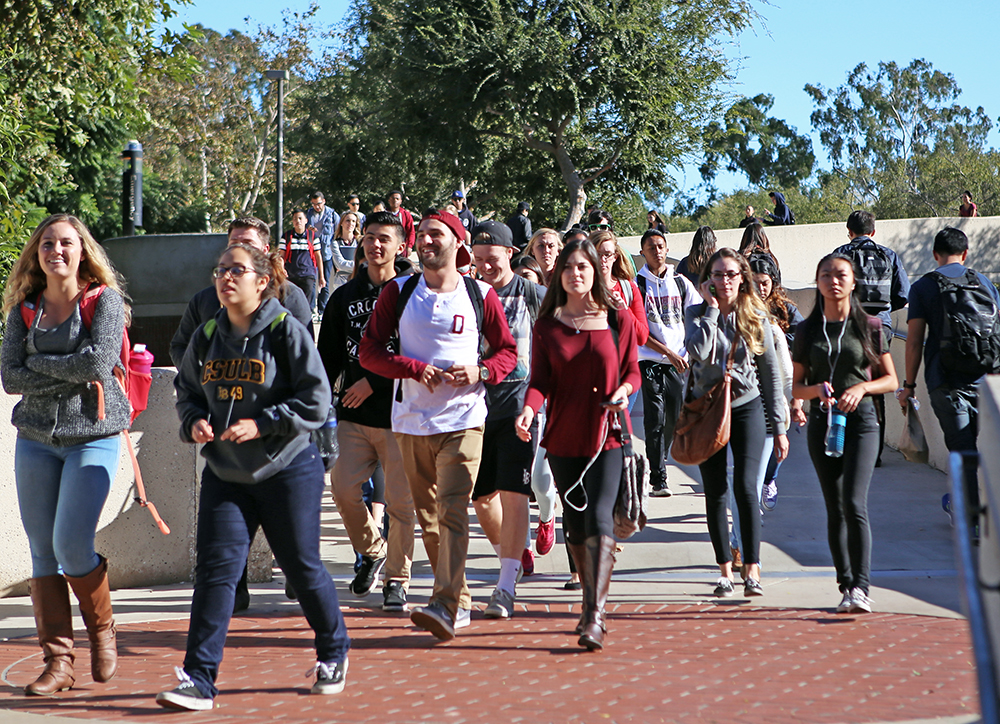 California State University trustees on Wednesday approved a budget proposal to fund a modest enrollment increase and an ambitious initiative to improve graduation rates, which would clear a path for the system’s 23 campuses to admit more students.

The trustees are seeking nearly $40 million from the state in next year’s budget to add just over 3,600 full-time students next fall, and another $75 million to launch CSU’s Graduation Initiative 2025.

Both the enrollment increase and the graduation initiative approved by CSU trustees are key components of the system’s ongoing efforts to increase access to what are called “impacted” majors and campuses. These are majors and campuses that are now at capacity, forcing the schools to raise admissions requirements for students they do admit and to turn away thousands of other students who would in the past have qualified for admission.

Officials warned that a failure by the state to meet the request for increased funding could lead to an increase of $270 in CSU’s tuition, above its current rate of $5,472. It would be the first such increase in six years.

“The goal is for CSU to be known for who we graduate, and not for who we admit or who we exclude along the way,” CSU Chancellor Timothy White said.

University of California students may also face a tuition increase of at least $300 next year, the first such increase in a half dozen years, UC officials said Wednesday.

For the 2017-18 school year, Cal State campuses in Fullerton, Fresno, Long Beach, San Diego, San Jose and San Luis Obispo are listed as at capacity or “impacted” across all majors they offer, while an additional eight universities have five or more majors with more applicants than they can accommodate, according to CSU figures. Cal State Dominguez Hills is the only campus in the 23-campus system without any “impacted” majors.

To be considered for admission to “impacted” campuses or majors, students generally need grade point averages and college entrance exam scores well above the minimum requirements. For example, this year’s admitted freshman class at Cal Poly San Luis Obispo had an average GPA of close to 4.0.

For this fall semester, CSU received applications for freshman admission from a record 215,000 students. About 33 percent of applicants were turned away from each campus they applied to. CSU officials expect more than 220,000 freshman applications for fall 2017.

“The goal is for CSU to be known for who we graduate, and not for who we admit or who we exclude along the way,” CSU Chancellor Timothy White said.

The proposed enrollment increase is a short-term solution to address “impaction,” while the graduation initiative could serve as a long-term fix, said Eric Forbes, CSU’s assistant vice chancellor for Student Academic Services.

“The movement of more students to graduation quicker is key,” Forbes said.

At CSU, far too many students spend too much time completing degrees, officials said. These students take up seats that otherwise could go to qualified applicants.

Additionally, the initiative includes improving the six-year graduation rate for freshmen to 70 percent from 57 percent, and improving the four-year rate for transfer students to 85 percent from 73 percent. Reaching these targets could produce 500,000 more graduates systemwide by 2025, allowing campuses to admit the same number of new students.

The $75 million requested by trustees would help campuses begin implementing in 2017-18 programs and services that include:

CSU officials have said the cost to operate these programs and services during the next decade could cost a combined $500 million, funding the lawmakers would need to approve.

But for Maggie White, the student representative on the Board of Trustees, it’s “heartbreaking” to deny any qualified student the opportunity to attend CSU.

White, a graduate student from Cal State Stanislaus, said she would likely have not been admitted as a freshman under today’s more stringent admissions standards.

“We as a system are turning away thousands of eligible students each year,” she said. “This is absolutely shocking to me, thinking about students being turned away before they even get to the door.”