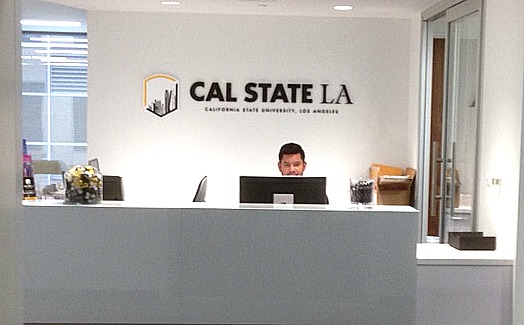 Carlos Moreno was among the first to show up for a recruitment and orientation session recently at Cal State Los Angeles’ new satellite campus in a downtown L.A. high-rise. As it turns out, he was exactly the type of person the new facility hopes to attract.

Moreno, 28, earned his associate degree at a community college — East Los Angeles — and now is eager to finish a bachelor’s in business administration. The new Cal State Los Angeles facility offers an evening schedule that fits with his job and impending parenthood. As an extra bonus, the classrooms are in a rapidly gentrifying portion of downtown, just a few blocks from his job as a law firm records manager.

“This is actually perfect. It takes me seven minutes to walk here,” Moreno said after listening to counselors and professors describe the new programs. “To be at the first Cal State in downtown is a big deal, especially for individuals like myself who are working downtown.”

Moreno and a growing number of students like him are playing a part in a back-to-the-city movement in California higher education. The trend is helping older and nontraditional students fulfill their education aspirations while extending the rejuvenation of urban centers in Los Angeles, Sacramento, Merced and Oakland as places to live, work, play — and, increasingly, learn. It is also happening around the country, in cities such as Orlando, Florida; Greensboro, North Carolina; and Phoenix, Arizona, among others.

The urban satellite campuses enable these students to save drive time and commuting expenses as they strive to complete their bachelor’s degrees or pursue graduate studies and occupational certificates. It also gives schools a new tuition-paying pool of students to tap.

Even with all the online education available for adult learners, many of them prefer in-person contact, particularly those who have not been in school for a while, officials say. And the students appreciate a learning atmosphere that is not focused on 19-year-olds.

He added: “We are seeing the full-time working professional or working parent who really needs access to affordable higher education.”

Cal State L.A.’s main campus is only eight miles away, east of downtown, but rush-hour traffic can discourage busy adults juggling school, work and family from making the drive there, he said.

After a small trial run this spring, Cal State L.A. expects to enroll about 350 students in the fall at the new facility at Eighth Street and Grand Avenue, where it leases the entire sixth floor. With impressive views of the downtown skyline, the classrooms and computer labs were recently decorated in a contemporary style, in shades of black, white and grey. The building is convenient to bus and subway lines, and nearby garage parking is discounted at $6 a day.

Bachelor’s degree completion programs for transfer students are being offered this fall in multidisciplinary liberal studies, business administration, psychology and rehabilitation services. A social work master’s is beginning this fall and an MBA and other degree programs are in the works.

The opening in downtown Los Angeles mirrors a trend playing out elsewhere in California and beyond.

Sacramento State recently purchased a downtown office building for $5.4 million on S Street, about a mile from the state Capitol. Graduate degree programs in public policy and urban planning programs are to start there this fall, and some undergraduate classes could follow later, according to Orn Bodvarsson, dean of the College of Social Sciences and Interdisciplinary Studies.

A downtown center, he said, “makes complete sense to provide maximum access for students and faculty and staff to the policy community.” And he predicted the location would appeal to downtown workers who don’t want to drive in traffic the six miles to the main campus.

Cal State East Bay recently expanded by about 40 percent its classroom space in a downtown Oakland office building on Broadway, just across from a BART station and 17 miles north of its main campus in Hayward. The Oakland center, established 15 years ago, enrolls about 1,500 students in master’s studies in business and social work and in certificate programs such as paralegal studies and medical billing.

However, it has shied away from undergraduate classes there since it does not have the counseling or libraries that younger students typically need, said Kate White, director of continuing education, who oversees the Oakland facility.

For many years, Cal State East Bay also has run a substantial satellite campus in Concord, about 30 miles north of Hayward. Bachelor’s completion studies are available for transfer students as well as full nursing programs, according to Robert Phelps, Concord campus director. Many of the 1,300 students there are “place bound” by work and family and would find it “very hard” to commute to the main campus, he said.

In the Central Valley, UC Merced recently broke ground for a downtown office and classroom facility, about seven miles from its rural main campus. University officials have not decided what types of classes to house there, according to a spokeswoman.

Satellite campuses are nothing new. CSU San Bernardino has a Palm Desert campus, CSU Bakersfield has an Antelope Valley campus and San Diego State has one in Imperial Valley; Cal State San Marcos was once a satellite of San Diego State, while Cal State Channel Islands began as an auxiliary of CSU Northridge.

But those satellites tend to be in suburban or even exurban settings, with an emphasis on freeway visibility. The new ones are distinctly urban and transit-oriented.

Downtowns and universities see mutual advantages, according to Don Bryson, a transportation consultant affiliated with the International Town & Gown Association, an organization that works to improve relations between campuses and host cities. Bryson said cities see universities as anchors to attract businesses and the arts, while schools see a big market of potential students.

One challenge is that some satellite programs are expected to be self-supporting, without the state funds that subsidize traditional programs. That is true for Cal State L.A.’s downtown campus, where undergraduates this year will pay $425 per academic unit — each course usually can be three or four units.

At the main campus, students pay a flat rate, one rate for up to six units a term, another for more than six. The downtown charges could wind up about the same as for part-timers on the main campus but become substantially higher if a downtown student takes a large course load.

Still, officials say it is a bargain compared with many for-profit institutions.

For Ana Juarez, 25 and the mother of a young child, the main attraction of the downtown Cal State Los Angeles campus is its adult and professional flavor, she said.

A special education assistant, Juarez wants to transfer from Los Angeles Mission College into the new liberal studies program at the Cal State downtown campus. At the orientation session, she said liked the idea of being with other mature students even though she would have a lengthy commute home to the San Fernando Valley.

Hoping to earn her bachelor’s and later a teaching certificate, Juarez said she wants to avoid all the “goofing around in class” she has seen younger students do at other campuses.

“Once you are a parent,” she said, “you stop all that and just do what you need to do to get your education.”