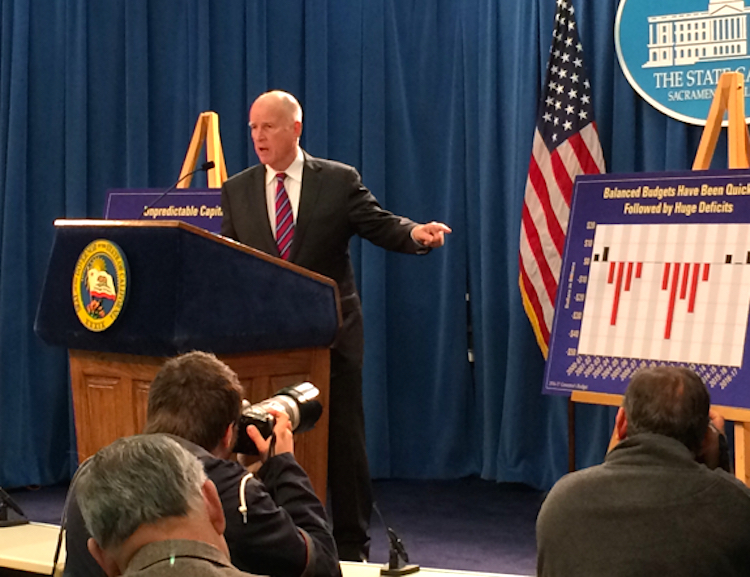 Update: The story was updated Jan. 10 to elaborate on the Department of Finance’s per student spending projections.

Brown made the comments at a press conference in which he presented a state budget proposal that includes a 5.6 percent increase in ongoing K-12 per-student spending for 2016-17. A summary of the budget can be found here.

Brown called the proposal for a 12-year extension of Proposition 30, a temporary tax that expires in two years “fatally flawed” because it would prohibit diverting any of the money into the state’s rainy day fund for general state spending. Building up that reserve to cushion the impact of the next economic recession is one of Brown’s priorities, and Brown spent much of the press conference warning of the likelihood of another downturn. “If you don’t remember anything else, just remember, everything that goes up comes down,” Brown said. His proposed $122.6 billion general fund budget would add $2 billion to the rainy day fund, bringing the total to $8 billion.

The California Teachers Association, the California Federation of Teachers, the Service Employees International Union and the California Hospital Association have drafted the Prop. 30 extension, which is now awaiting approval from the state Attorney General’s office to begin collecting signatures. By continuing the surcharge on couples making over $500,000 and individuals making more than $250,000, it would yield an estimated average of $7.5 billion in annual revenue, which would go primarily toward funding K-12 schools and community colleges, with money left over split between health care for children and the General Fund. Without the additional money, school revenues are expected to flatten in two years, at the same time that school districts face an additional $2 billion per year in added pension costs for teachers and administrators within the next four years.

But, to Brown’s displeasure, the proposed language says, “None of these revenues can be spent on state bureaucracy or administrative costs or be diverted to budget reserves.” Brown said that excluding money from the rainy day fund would add to instability in revenues that are already too dependent on capital gains taxes on the top 1 percent of wage earners. “You would put more weight on capital gains revenue without protections in debt repayment and the rainy day fund,” he said.

The sponsors of the initiative could amend it to satisfy Brown’s objections, but they’d have to do so by Monday to meet the deadline for changing wording of initiatives under review, said Becky Zoglman, associate executive director of the California Teachers Association. In a statement Thursday, the groups that submitted the initiative said, “An extension of Prop. 30 revenues is a critical component to keeping our state on track and not letting us slide back into years of deficits and cuts. We look forward to more conversations with the governor and are hopeful we can address his concerns.”

The Coalition for Adequate School Housing, or CASH, a coalition of school districts and school builders and architects, already have gathered enough signatures to place a $9 billion school bond on the November ballot, the first school bond in California since 2006. But for the last two years, Brown has called for changing the first-come, first-served process in which the state matches local districts’ contributions for new construction and renovation. He said the system enables wealthier and larger districts with staff to prepare construction projects to rush to the front of the line. Brown also indicated he wants a smaller bond. Brown said he’d work with the Legislature on an alternative plan; one option, needing a two-thirds vote in the Assembly and Senate, would be to put a bond on the June ballot.

With Prop. 30 still feeding revenue to the General Fund, K-12 schools would do well again in 2016-17 under the proposed budget. Districts will see  an  average increase of $512 in Prop. 98 per-student spending or 5.6 percent – roughly half of the unusually large $1,011 per-student increase in the current year, according to the Legislative Analyst’s Office. (The state Department of Finance cites a lower number: $368 more per student next year, which reflects a revision upward of the 2015-16 Prop. 98 entitlement.)

Most of the new money – an average of  $470 per student – would go to the Local Control Funding Formula, the new school financing system that steers extra dollars to English learners and low-income, foster and homeless youths. Districts with large percentages of those students would see an increase of more than $470 per student, and those with few high-needs students would get less.

Brown includes no additional spending for preschool, but is proposing to give more flexibility in current state funding for transitional kindergarten, preschool and a preschool quality system. Funding from those three programs would be combined into a new $1.6 billion Early Education Block Grant that can be targeted to low-income children. 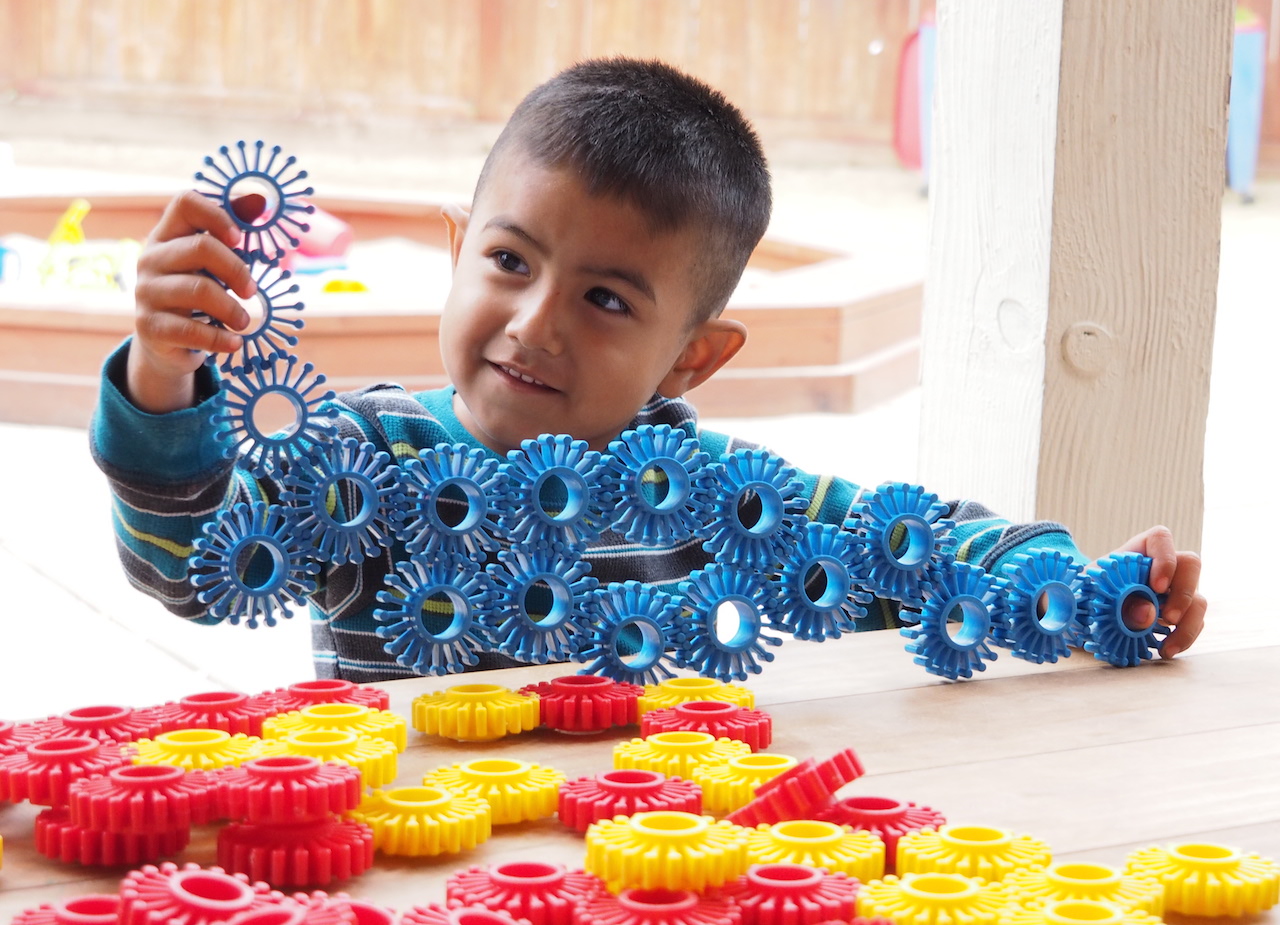 Under current state law, districts are required to provide transitional kindergarten to children who turn 5 between Sept. 2 and Dec. 2 if their families request it, regardless of how much money the family makes. The governor plans to introduce language that would change that requirement, so each district could decide whether to allocate the funds only for low-income children. The proposal also would give districts funds that currently are allocated directly to nonprofit and private organizations that provide preschools.

Total funding for Proposition 98, the primary source of money for K-12 schools and community colleges, would increase $3.2 billion from the 2015-16 budget to a record $71.6 billion. Total K-12 spending, including one-time additional revenues, would increase nearly $4.7 billion. Of that increase, $2.8 billion would go to the Local Control Funding Formula. There would also be $1.2 billion in one-time spending, split evenly per student. Districts could spend it however they want.

The higher education budget would also include $171 million in one-time funds for UC to pay down the unfunded liability of the system’s retirement plan, under a deal the governor made last year with UC President Janet Napolitano. In exchange for the added funding, the system would keep tuition frozen through 2016-17. UC and CSU would also receive $35 million each in one-time funds for deferred maintenance.

We thank Gov. Brown for once again proposing a big investment in the Local Control Funding Formula, accelerating implementation of a formula designed to provide more to those with the greatest needs. While we appreciate the Governor noting that the proposed $1.2 billion in one-time discretionary funding for schools can be used to implement new content standards, this approach doesn’t ensure that these dollars make it to teachers and students for this purpose. We hope that the final budget includes funds dedicated solely to implementing California’s new content standards to be certain that all students have fully prepared teachers and adequate materials. – The Education Trust-West

This budget confirms that the Governor’s priorities are in the right place with regard to education and continues the progress we’ve made in recent years to provide more of the resources necessary to prepare all of our students for college, career and community success. Prioritizing investment in schools is critical since California continues to rank near the bottom of all states in terms of school funding, staffing, and the resources we provide our students. – Mike Walsh, vice president of the California School Boards Association

We are moving in the right direction now, but with Prop. 30 set to sunset this year, it’s critical that we continue our investment in all California students by extending Prop. 30. Otherwise, beginning in 2019, we could create a $5 billion sinkhole in annual funding for schools and colleges. That’s $5 billion less each year for lowering class sizes, providing a well-rounded education, supporting teacher development, and keeping libraries open. – Eric Heins, president, California Teachers Association

We applaud Governor Brown for proposing more money for California colleges and universities with the expectation that they maintain affordability, significantly improve student success, and close persistent gaps by race and ethnicity.  What we need now is a bold, visionary statewide plan for higher education that can guide investment and align our colleges and universities around goals over time. – Jessie Ryan, executive vice president of the Campaign for College Opportunity.

It’s not a terrible plan and contains elements that I like and some things that I don’t agree with. I do support the Governor’s plan to add more money than necessary to the state’s Rainy Day Fund because it’s always a prudent move to plan for the next economic downturn. I’m also pleased that the Governor has largely resisted the urge to increase spending on many social programs or create new programs that demand ongoing funding. These are the priorities shared by Senate Republicans. – Senate Minority Leader emeritus Bob Huff, R-San Dimas

Gov. Brown’s proposal to shift early education funding to a block grant system is a departure from the way the state has traditionally funded these programs. In the coming days, I will be fully analyzing the proposal and hearing feedback from providers about how children in their programs will be impacted. – Incoming Assembly Speak Anthony Rendon, D-Paramount

We thank Gov. Jerry Brown for continuing to provide stability and financial support for our children, our schools and our community. We appreciate the Governor’s continued commitment to paying off the “wall of debt,” accelerating funding for the Local Control Funding Formula and the streamlining of education programs with greater local flexibility. – Los Angeles School Board President Steve Zimmer and Chief Deputy Superintendent Michelle King

California State PTA has been speaking with the Governor’s Office during the past months about the importance of specific one-time funding for family engagement – the number-one predictor of student success. The governor’s proposed budget does not currently include dedicated funding to support meaningful parent and family engagement in schools. This window of opportunity is short, and this is the year to support and strengthen what is now in state law – engaging parents and families. We look forward to continuing our conversation with the governor, the Legislature and other stakeholders on the importance of parent and family engagement in the months ahead. – Justine Fischer, president of the California State PTA