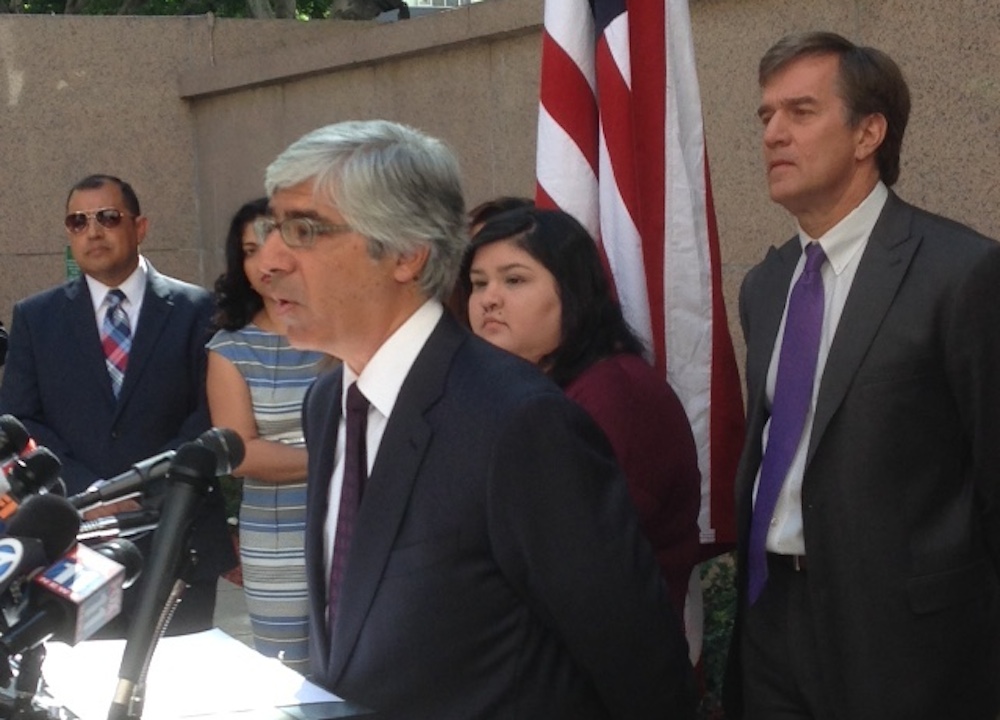 The one-hour hearing in downtown Los Angeles involved an appeal by teachers unions and the state government to reverse a 2014 ruling by a lower court judge who struck down laws that he said help keep bad teachers in classrooms. The impact on students’ lives “shocks the conscience,” Los Angeles County Superior Court Judge Rolf Treu declared in his August 2014 decision in Vergara v. California.

The three appellate judges on Thursday gave no overwhelming sense of how they might rule over the next 90 days, a decision with powerful implications for California’s 6 million public school students. But two of them expressed skepticism about some of the legal reasoning in Treu’s decision.

In their presentation Thursday in a full courtroom, attorneys for the California Teachers Association and the California Federation of Teachers, along with the state Attorney General’s office, sharply criticized Treu’s ruling.

Deputy Attorney General Nimrod Elias said the teacher employment rules – which include rights to tenure after two years, mandate that layoffs be based on seniority and set up complex dismissal procedures – have only a “highly indirect” influence on allowing ineffective teachers to stay and certainly not enough to merit “the extreme remedy” of throwing out the statutes.

Michael Rubin, attorney for the unions, emphasized that the statutes aid education statewide by providing some job protection to teachers. “They improve the overall quality of the teaching pool because they make the teaching profession more attractive,” he told the three-judge panel in the Court of Appeal’s Second Appellate District.

Rubin contended that Treu’s decision wrongly exaggerated the impact of the statutes and did not prove that a large, clearly identifiable group of students is being harmed. “Exposure to a single teacher in the bottom 5 percent (of teacher ratings) is not enough” to overturn the statutes, he said.

“There will always be some teachers who perform better than others,” Rubin said. The way to improve the process is for parents to complain about weak instructors and for principals to enforce standards but “not by blowing up the entire system,” he said.

Rubin insisted that school districts regularly remove grossly incompetent teachers. He argued that it is administrators’ fault, not the result of the laws, if a small number of underperforming instructors remain in their jobs.

In contrast, Theodore J. Boutrous Jr., attorney for the Students Matter organization that first filed the lawsuit on behalf of nine California schoolchildren, urged the judges to uphold the previous decision.

Judge strikes down all 5 teacher protection laws in Vergara lawsuit

The employment laws, he declared “are absurd, they are irrational.” Boutrous noted that many educational experts in the original trial testified that the laws encourage dumping grossly incompetent teachers in the schools with the most faculty vacancies. And having teachers who are unable to properly move students through grade-level studies or control their classrooms costs low-income and minority students up to a year’s worth of lost education and harms their lifelong earning power, he said.

“This isn’t some complicated physics formula. It’s a simple equation of two plus two is four,” Boutrous said, describing what he said is a direct link between the laws and violations of the “fundamental right to educational quality.”

In his statements to the court, Boutrous said the laws result in a “dance of the lemons”– a term for not dismissing incompetent teachers but instead transferring them to other schools, usually those serving minority and poor children. “The statutes are harmful; they are injuring students,” he said.

Students Matter was founded by David Welch, a Silicon Valley businessman who is involved in school reform efforts that have antagonized teachers unions. Welch attended the hearing and later spoke at a press conference expressing confidence that the Vergara ruling would stand, even if it had to go to the state Supreme Court.

While both sides in the case later said they were pleased with how the hearing went, the Students Matter side clearly faced tougher questioning from the judicial panel.

Treu’s decision repeatedly referred to the historic Serrano v. Priest cases in the 1970s, which struck down the financing of schools based on local property taxes, a system that had hurt students in poor communities. The employment laws have similar effects, he wrote.

However, appellate judge Judith Ashmann-Gerst said that the Serrano cases correctly showed that unequal tax bases had a concrete and measurable impact on school funding and that the method discriminated against children in poor communities. “Here it’s not so clear,” she said of the employment laws’ supposed effect on students. She also questioned whether principals and administrators should be blamed rather than the laws. “Don’t administrators have the ultimate decision?” she asked.

Judge Brian Hoffstadt raised questions about whether there is a statewide impact as a result of clustering incompetent teachers and whether groups of students being harmed can be clearly identified. He asked how a small school district with only one elementary school can be depicted as dumping bad teachers. He also said that it appeared difficult to pinpoint a class of students harmed by the laws since the group “may change year to year.”

Boutrous countered that the Serrano cases did not show that every student in California was getting a bad education but it proved that enough of them suffered educational inequities to merit judicial action. The Superior Court testimony in the Vergara case, he said Thursday, clearly supports Treu’s decision, and he urged the appeals judges to concur. “Are rights being violated (by the employment statutes)?” he asked. “The record is clear: absolutely yes. I don’t think this is a close call.”

“I don’t know how the state can defend these statutes,” he added.

The case clearly has prompted strong political passions. And on Thursday, the two sides both held press conferences outside the state office building on Spring Street that contains the courtroom, and held phone conferences as well.

After the hearing, Boutrous said he “felt very good about how the arguments went today.” He said the judges asked “a lot of good questions” and would ultimately decide to strike down statutes that he said “are hurting our state, are hurting our kids.”

Welch said that the Vergara case already has had a positive impact by changing the public conversation about teacher employment. While some of the original student plaintiffs have already graduated from high school, he said many other youngsters around the state will be aided if the appeals court upholds Treu’s ruling.

“Californians deserve an appellate court ruling that puts politics aside and does what is right for the children of our state,” Welch said.

Just before the hearing, civil rights activist and farm worker organizer Dolores Huerta spoke on behalf of the California Teachers Association and the California Federation of Teachers. She described the Student Matters lawsuit as an attack on teachers and their rights.

She said she had been deceived at first in lending some support to the Students Matter organization but came to realize that its lawsuit will not improve education in California.

Attorney Rubin, in a press call after the hearing, said he was “delighted” with the way the arguments went. “Three engaged justices asked the right questions” and identified the flaws in Treu’s decision, he said. “We are confident we will prevail,” Rubin said.

Earlier, at a press conference before the court session, Rubin alleged that the original lawsuit was filed to help establish an “ideological political agenda” at the expense of the carefully refined laws passed by the Legislature. If the Vergara decision is upheld, he predicted that teachers will become “at-will employees who can be fired for any reason or no reason at all.” The result, he said, would “destroy the system of education to the detriment of schoolchildren.”

Treu issued his 16-page decision in 2014 following a two-month trial with 60 witnesses. He concluded that the plaintiffs had presented abundant evidence that the five statutes in question protected “grossly ineffective teachers” whose poor instruction interfered with students’ fundamental right of equal access to a quality education.

Lawyers for Students Matter and the state both agreed that the number of those awful teachers was small, between 1 and 3 percent, equal to 2,750 to 8,250 teachers in California. But for students assigned to those teachers, Treu said there is “a direct, real, appreciable and negative impact on a significant number of students now and well into the future as long as the teachers hold their positions.”

Rather than go through the expensive process of firing the worst-performing teachers, districts transferred them to the most challenging schools, Treu said. Treu called layoffs strictly based on length of service “a lose-lose situation,” in which ineffective veteran teachers stay on the job while effective, newer teachers are let go. The state’s defense of the status quo “is unfathomable,” he wrote.

He wrote that granting tenure or permanent status after two years hurts students and potentially some teachers by not allowing enough time to make “an informed decision” on teacher competence.

Treu dismissed the unions’ arguments that the current dismissal statutes are needed to project teachers’ due-process rights. There would be sufficient protections without the laws, which he said are “so complex, time-consuming and expensive, as to make effective, efficient yet fair dismissal of a grossly ineffective teacher illusory.”