Regents with the University of California will consider a plan next week to enroll 10,000 more in-state freshmen and transfer students over the next three years.

The move follows years of enrollment cuts and freezes for in-state students as the system added a higher number of out-of-state and international students, who paid more in tuition to help offset state budget cuts. Politicians, educators, students and others had staunchly criticized the system in recent years for reducing access to California students in favor of higher-paying nonresident peers.

“The University of California is meeting the challenge of educating as many students as it possibly can to meet, and solve, the challenges of the future,” Napolitano said in a statement regarding the plan for more California students. “We are committed to sustaining increased access to our campuses and the world-class education they offer.”

Regents will vote on the proposal at their meeting Nov. 19 in San Francisco.

The plan would be funded through $25 million allocated to boost enrollment under last year’s state budget agreement, an additional $25 million provided by UC, an expected increase in state revenues in coming years, and by phasing out financial aid the system provides for low-income student from outside California, Napolitano said. Under the plan, the number of nonresident students would also steadily decline each year.

“We are committed to sustaining increased access to our campuses and the world-class education they offer,” said UC President Janet Napolitano.

If the plan is approved, the university system will also request an additional $6 million in state funding to enroll 600 more graduate students in 2016-17.

The plan would allow for regents to consider a future tuition increase “pegged generally to inflation” to help offset some costs. The tuition increase would not happen until at least the 2017-18 school year, according to the proposal. No specific figures for a potential tuition increase have been revealed. 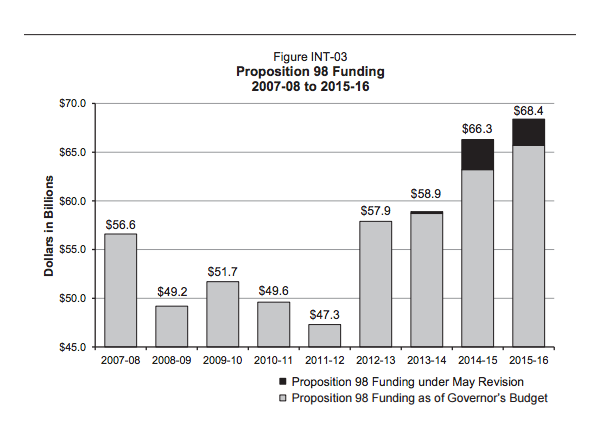 This fall, the UC admitted 61,824 freshman students from California and 20,921 transfer students from state community colleges. That amounts to a 2 percent decrease compared to two years ago.

By comparison, the system admitted 30,490 out-of-state and international students this fall, up 26 percent from 2013-14.

If approved, all nine undergraduate campuses – including high-demand schools such as Berkeley and UCLA – will be able to increase the number of admitted undergraduate students, said UC spokeswoman Rebecca Trounson.

The number of additional students admitted by each campus would be determined by the number of applications schools receive, their overall capacity and other factors, Trounson said.