Report calls for more support for black students in California 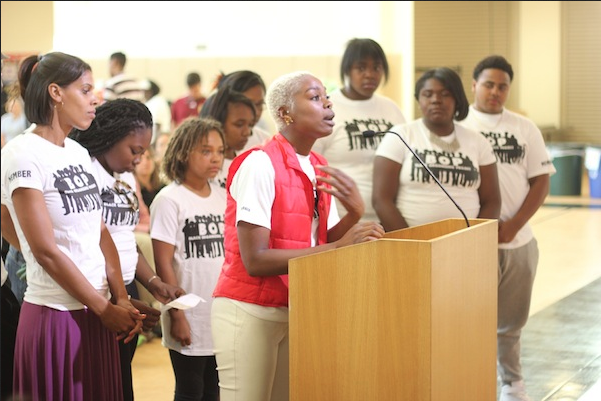 Called “Black Minds Matter: Supporting the Educational Success of Black Children in California,” the 32­-page report highlights disparities in academic achievement and discipline between black students and their non­-black peers from preschool through college. It also lists several programs throughout the state that could serve as models to others hoping to close achievement and “opportunity gaps,” and includes 36 recommendations for state policymakers and education leaders aimed at remedying inequities.

“Although we’ve made some progress, black students continue to face an education system that squanders their talent,” said Ryan Smith, executive director of Ed Trust–West, in a prepared statement. “The deaths of unarmed youth by law enforcement across the country tell black youth that their lives matter less than other lives. Similarly the decisions made within our education systems tell black students that their minds and futures matter less as well.”

California has the fifth­-largest black population in the nation, including about 900,000 African­-American youth under 25. About 6 percent of California students are African-American, according to the state Department of Education. The highest percentages of black students are concentrated in five Northern California counties: San Francisco, Contra Costa, Alameda, Sacramento and Solano, where 10 to 16 percent of students are black, the report says.

“Often we make assumptions about why outcomes are lower for students of color, assumptions that place the blame on students and their families,” Smith said in an e­ mail. “However the data reveals that students of color and low­-income youth suffer because of specific decisions made within the education system. Black students have less access to the GATE (Gifted and Talented Education) program, college preparatory courses and effective teachers and are more likely to be suspended, expelled and pushed into remedial classes. These are policies and decisions that we have the power to change.”

In addition, the report found that black students were least likely to complete high school in four years and to get college degrees. It urged state and education leaders to swiftly address the problems listed, in part by replicating successful initiatives throughout California.

The report praised the state’s Transitional Kindergarten program as a “step in the right direction” in expanding early learning opportunities, but said it “doesn’t replace the need for traditional preschool, which offers greater adult support and much smaller adult­-to­-child ratios.”