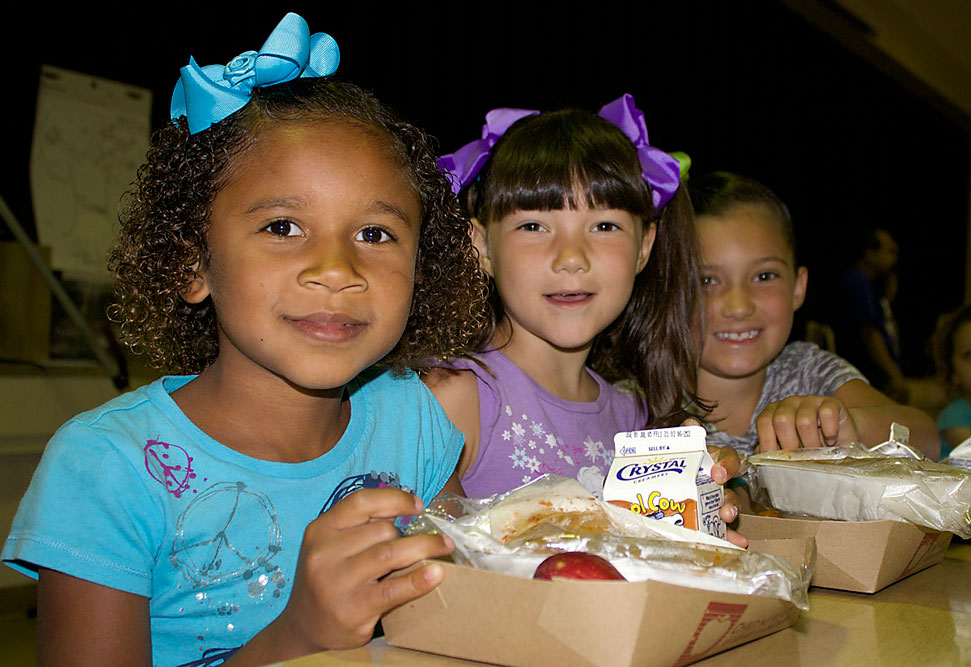 A half a cup of a fruit or vegetable is required in every school lunch served in America, under federal regulations now up for review in Congress, and as far as the California School Nutrition Association is concerned, that requirement needs to go.

In a turn of events that belies California’s position as a national leader in mandating healthier school lunches – as well as the state’s role in growing nearly half of the nation’s fruits and vegetables – the California School Nutrition Association is pressing Congress to weaken the requirement that school lunches include fruits and vegetables, reduced amounts of sodium and more whole grains.

The association is lobbying to make a half cup serving of a fruit or vegetable optional, rather than required. It is also lobbying to stop any further reduction in sodium levels and to halt the increase in “whole grain rich” products, which would require that all breads, tortillas and rice be made with 50 percent whole grain. “We’re looking for flexibility,” said Dena England, president of the California School Nutrition Association, a nonprofit association of 2,000 members from school food service departments and additional food industry members.

“I am really surprised that they would take that position,” said Shirley Watkins, a former U.S. Department of Agriculture Under Secretary for Food, Nutrition and Consumer Services. “California has always been a leader.”

Despite pushing for optional servings of fruits and vegetables, England said getting students to eat produce at lunch has not been an issue in the San Marcos Unified School District, where she is executive director of Child Nutrition Services. “If you have some type of education program, children will tend to select fruits and vegetables and try them,” she said. “In my district, we have a farmer’s market.”

Years before the U.S. Department of Agriculture took up the task of improving school nutrition, California banned trans fats in school lunches, eliminated the sale of fast food on campuses and removed soda from school vending machines. According to the California Department of Education, 100 percent of California school districts are in compliance with the new healthy meal regulations, which were introduced in 2012 and endorsed last year in a letter from State Superintendent of Public Instruction Tom Torlakson. In a 2012 California public opinion poll, 82 percent of students and 91 percent of parents supported the standards.

But the California School Nutrition Association does not. Last spring, the California association sent members to Congress to lobby against the fruit, vegetable, sodium and whole grain requirements, which are included in the reauthorization of the Child Nutrition Act. The California School Nutrition Association also seeks to overturn a rule that prevents schools from offering the same item, such as pizza, for a la carte purchase every day. Congress missed its Sept. 30 deadline for reauthorization of the act, but funding for the meal programs continues, as does debate about the nutrition standards.

“I am really surprised that they would take that position,” said Shirley Watkins, a former U.S. Department of Agriculture Under Secretary for Food, Nutrition and Consumer Services and a past president of the national School Nutrition Association, the parent organization of the California association. “California has always been a leader.”

The California association’s members repeated the national group’s assertion that the regulations have put food service departments in financial straits and greatly increased the amount of waste. The financial fallout claim has been contested by the Union of Concerned Scientists, an advocacy group, and food waste has been the subject of several studies, including one that found more waste and another that found less since the regulations took effect. The U.S. Department of Agriculture last month issued its own fact sheet stating that 95 percent of schools nationwide are meeting the updated nutrition standards and school lunch revenues are up.

The School Nutrition Association, with 53,000 school food service employee members as well as food industry members, has become the most public group to lobby Congress against the standards and is “pretty much insisting that all state-affiliated groups do the same,” said Lorelei DiSogra, vice president for nutrition and health for the United Fresh Produce Association, a trade group that represents producer growers and distributors.

The School Nutrition Association initially championed the standards, which were developed by the U.S. Department of Agriculture in consultation with the National Academies’ Institute of Medicine. The reforms, a signature priority of First Lady Michelle Obama, were adopted in the bipartisan Healthy, Hunger-Free Kids Act of 2010.

But the national association flipped its stance in 2014, and now is allied with Congressional Republican opposition efforts, led by U.S. Rep. Robert Aderholt, R-Ala., chairman of the House Appropriations Agriculture Subcommittee. In 2014, as Aderholt pushed for a bill allowing schools a one-year waiver of the “whole grain-rich” requirement, the School Nutrition Association supported the waiver and spent $406,000 on lobbying, more than double the $149,000 it spent on lobbying in 2013.

In protest, 19 past presidents of the School Nutrition Association signed a letter in May 2014 urging Congressional lawmakers not to listen to the organization they once led.

The School Nutrition Association’s credibility was damaged, too, when the Environmental Working Group, a watchdog organization, reported that a significant portion of the association’s revenue came from sponsorship fees from giants in the processed food industry, including Schwan Food and ConAgra.

Financial ties to the processed food industry are also strong at the California School Nutrition Association, where companies can pay $20,000 to co-sponsor the 2015 annual conference, $7,000 to have the company logo displayed during the keynote address or $400 to have a California student visit an exhibit booth with a chaperone and sample a company’s food, according to a flyer for the Nov. 5 conference in Ontario.

“It’s what’s been happening since the beginning of time,” said Miguel Villarreal, food and nutrition services director for the Novato Unified School District and a veteran of more than 30 years in school food service work. “Big food manufacturers and beverage companies support the School Nutrition Association – they help fund conferences and many other initiatives,” he said. “It’s the same in every state.”

“I reach out to industry when I need to speak to them,” he said, “but my partners today are students, teachers, parents, nonprofits, health organizations, community liaisons.” He continued his list of partners: “The city of Novato and all the work they’re doing, nurses, coaches. Did I say farmers? Definitely farmers. It’s an entirely different array of partners who are trying to improve nutrition and wellness in the community.”

As for the California School Nutrition Association, of which he is a member, he said, “They’re not speaking on behalf of me. I don’t think that weakening the standards are what we should be doing.”