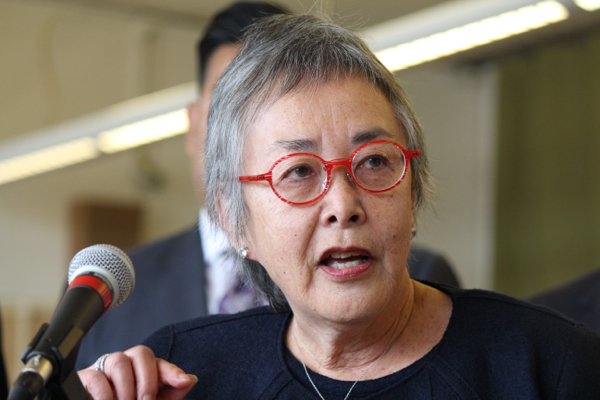 The California High School Exit Exam may be suspended immediately, possibly letting off the hook thousands of seniors who need to pass it to graduate this year, under a bill passed today by a legislative committee.

The Assembly Education Committee approved the bill, SB 172, to suspend the requirement that students pass the exit exam starting with the Class of 2015. One member, Assemblywoman Young Kim, R-Fullerton, abstained.

The vast majority of seniors already completed the exam to graduate this past school year. State law started requiring students to pass the exit exam, which has English language arts and math sections, to graduate from high school starting with the Class of 2006.

Earlier this year, a previous version of the bill stated that the exit exam should be suspended for three years starting in 2016-17 because the test is based on the California State Standards, which are no longer taught in schools. The suspension time would give state officials time to figure out future graduation requirements based on the Common Core standards, now used in classrooms.

But state lawmakers later learned that the contract with the exam’s testing company, Educational Testing Service, expired after the May exam. The California Department of Education canceled the July administration of the exit exam, also known as CAHSEE.

About 5,000 seniors, who had yet to pass the test, would have been eligible to try again this month – possibly a last-ditch chance to graduate in 2015.

After the contract expired, legislative staff recommended that the committee suspend the exam for three years starting in 2014-15.

“The exam is no longer available for class of 2015 test takers who failed the May administration and cannot retake it,” a bill analysis stated. “(The) intent, then, is to suspend the CAHSEE requirement beginning with those members of the class of 2015 who have not passed it.”

The bill’s author, Sen. Carol Liu, D-La Canada Flintridge, supported the change, saying it “provides relief to the Class of 2015.”

The legislative analysis listed 29 bill supporters, including State Superintendent of Public Instruction Tom Torlakson, who sponsored the bill, as well as the California School Boards Association and the California Teachers Association.

“It does not make sense to continue to give an exam based on old standards,” said Keric Ashley, deputy superintendent of the California Department of Education. “It’s time to move on and look at other options.”

Two of those who initially were listed as opposing the bill changed their minds.

Kim, who had concerns about the bill, said she decided to abstain because she was “torn” about the exam’s suspension.

“I believe we should have a minimum skills test before they graduate,” Kim said.

Doug McRae, a retired educational measurement specialist, said he thought the suspension was premature before a decision is made about the exit exam’s future. He was opposed to the original version of the bill and remains so.

The bill calls for the superintendent of public instruction to form an advisory panel to make recommendations about the continuation of an exit exam or “alternative pathways” for graduation. A report to the State Board of Education would be due March 1.

For the Class of 2014, 97 percent of all students passed the test to graduate, according to a November 2014 report cited in the legislative analysis.

Many students, who fail the exam after multiple attempts, often are missing class credits and would not graduate anyway, educators have said.

During high school, students have eight opportunities to take the exit exam, starting in 10th grade. The math portion is based on Algebra 1 and the English section is based on 10th-grade standards.

The bill passed the Senate on June 1. The next step is the Assembly Appropriations Committee.