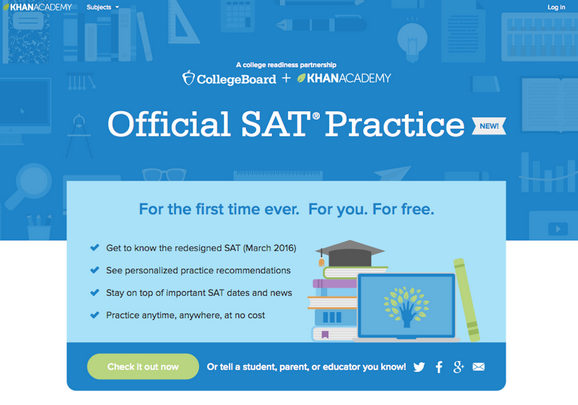 Students anxious about what the new SAT holds will be able to get their first glimpse at the newly redesigned exam in a series of free practice tests that launched Tuesday by online educational video provider Khan Academy.

The launch comes about a year after the College Board announced it was redesigning the SAT, which hundreds of universities use in admissions decisions. Officials say the new test is more grounded in the skills and abilities students will need in college and is better aligned to what students learn in the classroom.

“Everything we’re doing today is to make it easier for students to navigate this territory,” College Board President David Coleman said during a media briefing announcing the launch of the free service. “… I think students can today with great confidence know that the new SAT is not a departure from what they’ve been learning. It’s going to focus on the very things they’ve been doing all along in their classroom, and now they have free tools where they can really practice in depth wherever they feel weakest.”

The online materials – offered free for any student who logs into KhanAcademy.org – also represent a departure from previous test prep services, which often required students to purchase pricey practice books or hire expensive tutors to bone up for the SAT. The preparation services offered by outside providers raised equity concerns, with many low-income students being priced out of the services.

The practice tests are also interactive, and will provide students immediate feedback on particular skill areas they need to work on, and will include instructional videos and additional tools to help students beef up in their weakest skill areas and get comfortable with the test.

Students can visit the site as often as they wish to help them learn the material, both for the SAT and the PSAT practice test often taken by students in their sophomore year.

Coleman, appointed College Board president in 2012, was a driving force in revamping the test to more closely align it with what students are learning. Coleman was also closely involved in writing the Common Core State Standards, which have been adopted by California and 42 other states.

To help ensure that the widest number of students possible have access to the new practice tests, the College Board and Khan Academy are partnering with community groups, schools and nonprofits to help bring the practice tests to students.

One of the biggest partners is the Boys & Girls Clubs of America, which will offer special training to its educators to help introduce students to the online tests. Five Boys & Girls Clubs locations are already offering the practice tests in a pilot program, with additional clubs planning to join over the summer. The Boys & Girls Clubs serve more than 4 million students a year at 4,100 clubhouses across the nation.

“We’re ensuring that young people, especially those in underserved communities, are not just hearing about these tools, but are being walked into a relationship on how to use them,” said Damon Williams, senior vice president of youth development services at the Boys & Girls Clubs.

The new SAT will be offered for the first time in March 2016. The English language section requires more analysis of texts, requiring students to interpret meaning and demonstrate their answers. The lists of obscure vocabulary words have been removed, and the essay section is now optional.

The new test is also shorter than its predecessor – three hours, instead of three hours and 45 minutes – and the top score is again 1600; the top score had increased to 2400 when the essay was added in 2005.

January 2016 is the last sitting of the current SAT.

Khan Academy offers some test prep services for the current SAT, but they aren’t as robust as the practice offered for the new test, officials said.

Coleman said he hopes the new materials available at Khan Academy will take some of the mystery and fear out of prepping for the SAT, and will give more students the tools they’ll need to do their best on the exam.

“We hope the redesign is really going to try to calm the waters a bit,” he said, “and allow students to do productive work rather than unproductive worry.”